Thinking of turning that LS Crate Engine into a something that’ll burn up the strip? The Bowtie LS crate engine is a pretty awesome power plant as it is. However, if you want it to power your car down the ¼ mile in less than ten seconds, you’ve got to give it some help. Exactly what you’ll need to do will depend on which engine you select. No matter which one you select, you’ve got to let it breathe as much as possible to develop maximum power. You’ve also got to remove as much parasitic drag as possible.

Get As Much Air in As Possible

The more air you can get into the combustion chambers, the more power and torque your LS engine will produce. If you’re going old school and slapping a carburetor on top, you want the biggest carburetor you can get. Something like a Holley 1150 CFM (cubic feet per minute) Ultra Dominator will move massive amounts of air through the bell and into the intake manifold and properly mix the right amount of fuel. If possible, go with a dual carb setup, using twin 700s. 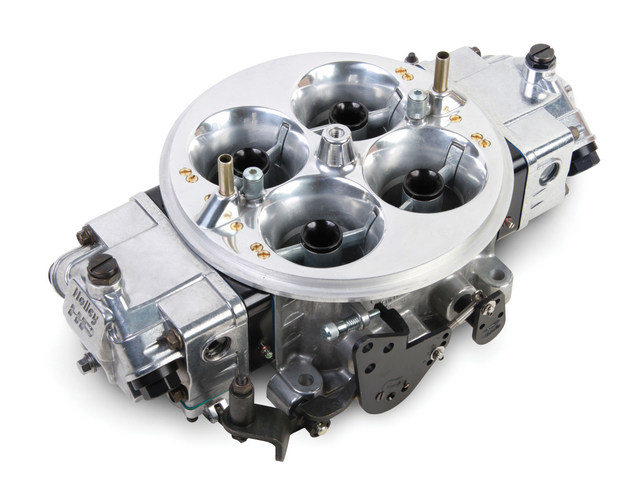 You’re also going to want the best intake manifold you can get your hands on. This will be something like an Edelbrock Performer RPM dual-plane manifold with equal length runners. These are available in either single- or dual-carb setups. There are quite a few other options, but what you’re looking for is something that develops max power from off-idle through about 6500 RPM. For those going with a fuel injected setup, something like Edelbrock’s Fro-Flo XT is ideal, as it develops peak power from 1500 through 7000 RPM-perfect for a strip burner. Whether you go with an EFI setup or a carb you’re also going to want an air filter that allows maximum airflow and minimal restriction. This means something like a K&N filter system or Edelbrock’s Pro-Flo Air Filters.

Pack the Air In 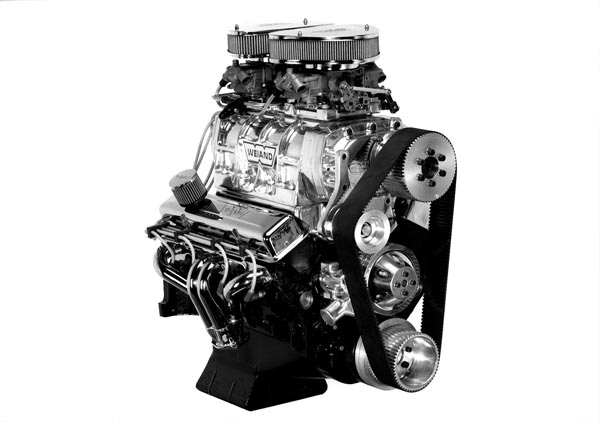 We’ve all seen them on race day. Pretty much every dragster out there has one. I’m talking about a blower, of course. Sure, you can install a supercharger and keep it low profile, but why would you want to do that if you’re building a strip burning engine? A supercharger has two serious drawbacks in comparison to blowers.

First, and worst, in regards to drag racing, is that there’s a noticeable lag. It’s not anywhere near as bad as a turbocharger, but it’s there and can make the difference between a winning run and an also ran. Second is that they don’t produce as much boost as blowers do. You’ve also got to admit, that big Roots 6-71/8-71 with the ram scoop on it just looks better. It gets in the way when you’re on the street, but you’re building this for bragging rights at the strip, right? 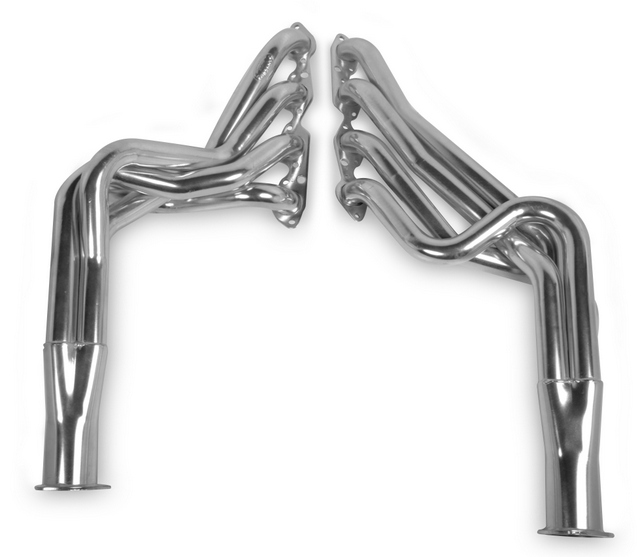 Ok, so what do we do with all these hot exhaust gases once we’ve crammed them into the combustion chamber and made power with them? We’ve got to exhaust them as efficiently as possible. This means you’re going to want the best set of headers you can get. Hooker, Blackjack, Hedman, Borla, and others all make excellent headers for your LS engine that will whisk away those hot gases much more efficiently than the stock exhaust manifolds do. They also look and sound quite a bit better while they’re at it. If you’re not going to be driving this car to and from the strip, just bolt a “tailpipe” to the header collector and you’re good to go.

However, if you do plan on occasionally using the car on public roads, you’ll want to bolt up a y-pipe to the collector and then fit it with a good high flow exhaust system from someone like Borla, Magna-Flow, or Innotech. The inlet side of the y-pipe attaches to the header, while one opening on the outlet side bolts to the exhaust system (catalytic converter where required, exhaust pipes, and mufflers), while the other side points towards the side of the car and has a cap that is removed for your hot runs down the track.

One quick note before we move on: If the class you plan to compete in allows it, you’ll want straight pipes instead of a set of headers. These are pipes about three feet in length that exit straight out the side of the car that are welded to a bracket that bolts to the cylinder head

Reduce Parasitic Drag on the Engine 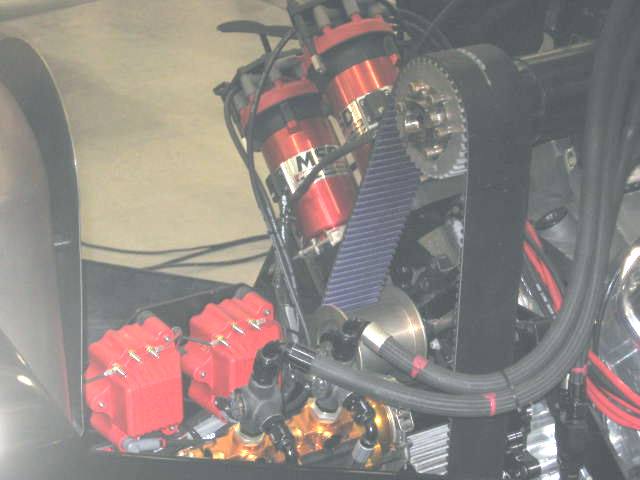 Parasitic drag is anything that robs your engine of horsepower. These are the accessories such as the water pump, power steering pump, air conditioning compressor, and alternator. If you’re only going to be using the car on the track, you really shouldn’t need any of these items in truth. You can get rid of the water pump, since the engine shouldn’t be run long enough to cause it to overheat. Air conditioning and power steering on a strip burner car? Now that’s funny.

But wait, you say. I need an alternator to keep the battery charged! No, you don’t, not for a dragster. Yeah, you’d need it for a daily driver, but not when your engine is only running for a maximum of ten minutes. Buy a Shuriken, Odyssey, or Optima battery and keep it topped off between passes. The only thing you really need driven is the blower. However, if you’re going to build your engine and car out as close to something John Force would feel comfortable in, you will want a dry sump oil pump that’s belt driven.

How much power your LS engine will be able to create will also depend on how hot you can make the spark. This means something like and MSD or Accel racing electronic ignition setup, with the best coil you can get, as well as the best set of spark plugs and wires you can buy. Since you want your engine to produce as much power as possible, you want to gap the plugs a little bigger than what the specs say. For example, of the spec is .053, bump that up to .055 or .057. The bigger gap requires more voltage to jump, creating a hotter spark which creates more horsepower and torque.

Everything mentioned above is bolt-on stuff that doesn’t require you to tear into the engine. However, if you want even more power, you’re going to have to do just that. Pull the heads and send them to a shop to have bigger valves installed and have the machine shop mill them with multi-angle seats to create a firmer seal and stop leakage. Bigger valves allow for more flow and thus more power. Have the heads milled so the air flows through them more smoothly, while creating a swirl effect to more completely atomize the fuel and mix it with the air charge.

Want even more power? Figure out the specs on the cam your engine has (lift, duration. and overlap) and install one with more lift and duration. Lift is defined as the distance (in inches) between the valve and the seat when the valve is fully opened. More lift means more air and fuel which means more power. Duration is the length of time, in crankshaft degrees, that the valve is open, from off-seat to fully seated. Again, the longer valve is open, the better. Overlap is the amount of time, again in degrees, that the intake and exhaust valves are open together. You want to keep this somewhat small, but you do want some, as it allows the incoming air charge to force the last vestiges of exhaust gas from the cylinder.

If you want to really go wild, you can also pull the crank and stroke it. This means lengthening the stroke, or the up and down distance that the piston travels in the cylinder bore. A piston that travels further down the cylinder bore is able to draw in more air and fuel which in turn creates more power. It’s all about the power baby!