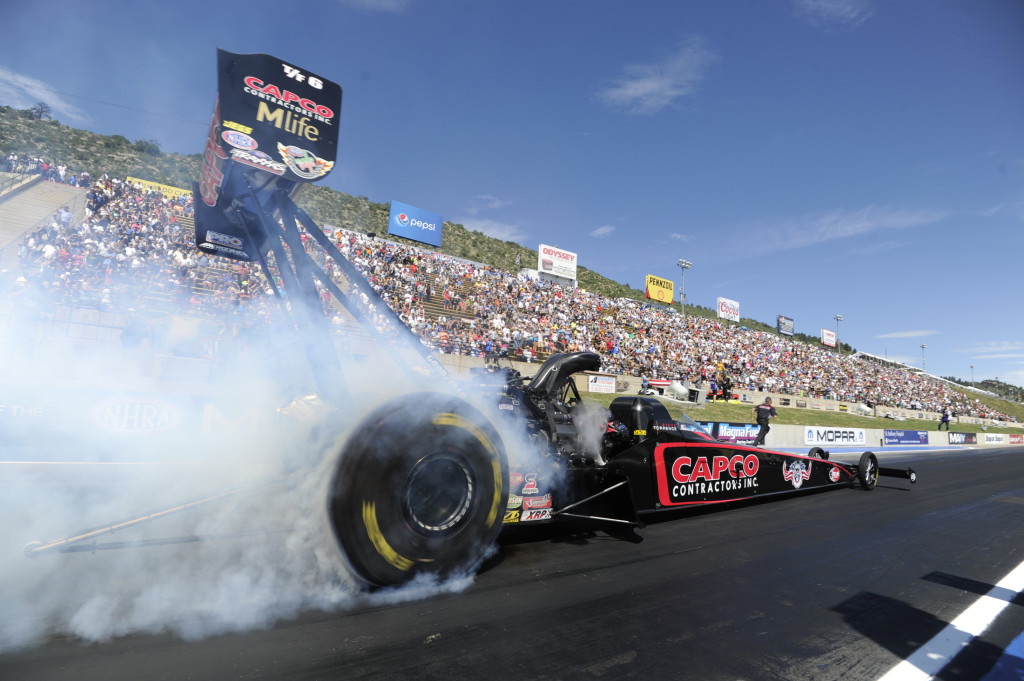 Larry Morgan used a Pro Stock burndown at the start and a holeshot at the finish knocking Allen Johnson off the top of ‘The Mountain’ and Eddie Krawiec used a Harley holeshot to beat Hector Arana, Jr. in the two-wheel finals.

With just four races to go before the start of the NHRA Mello Yello Countdown to the Championship, Steve Torrence had his back up against the wall and responded in the manner one would expect of a former world champion Sunday when he drove his Capco Contractors Top Fuel dragster to a dramatic victory in Denver.

Facing seven-time series champ Tony Schumacher in the final, Torrence overcame a narrow starting line deficit to run down the current points leader at the finish, winning by .001 of a second after covering the 1,000 foot distance in 3.925 seconds at 319.37 mph to Schumacher’s time of 3.940 seconds at 305.08.

It was the first NHRA National event tour victory in more than two years for Torrence and after falling out of the Top 10 and facing the prospect of not being in contention for the championship, Torrence will move on to this week’s Sonoma Nationals in ninth place.

Not only did the victory give Torrence a bit of breathing room in the points race, it also earned him the final guaranteed starting position in the Traxxas Shootout, the eight-car Top Fuel bonus race in which he was runner-up two years ago.  The eighth and final starter will be determined by fan vote and lottery.

The victory was Torrence’s first win in 51 NHRA National events since the 2013 Bristol race giving him his fifth career win.

“We got to test the limits a little,” Torrence said, “because we knew we could go back to what worked on Friday.  The car was perfect today and my guys were awesome.  The last two rounds, we’re racing guys who between have won 10 championships.  If that doesn’t fire you up, I don’t know what will.”

After qualifying No. 4, Torrence unloaded what would be the quickest overall time on race day when he was clocked in 3.891 seconds in a first round victory over Jenna Haddock.  He beat Richie Crampton in round two and three-time world champion Larry Dixon in the semifinals to earn a shot at Schumacher.

“It was a great win for the team and to get in the Traxxas Shootout, that’s a big deal,” Torrence said.   “We came close to winning the hundred grand two years ago and now we get another shot at it.  The biggest thing, though, is we finally have some momentum.  I can’t wait to get back in the car at Sonoma.  We’re in a rhythm right now and we need to just keep it going.”

Jack Beckman raced to his fourth Funny Car win in 14 races in the DSR Infinite Hero Dodge Charger taking out John Force in the finals, and moving up to second in the points standings.

“To go out there and beat the No. 1 qualifier, the winningest driver of all time and do it at the Mopar race at Bandimere … this is just a perfect weekend,” Beckman said.

“Jimmy is just absolutely incredible, he’s bold.  Here’s the deal, we know what Jimmy is capable of, and we know John Medlen’s reputation.  I hope that this starts to put Chris Cunningham on the map too because I wish you could see the way they interact up there.  The harmony there is perfect.”

Team owner Don Schumacher added, “A gratifying win.  It was tremendous for Jack to go out there and win this race for Mopar, for DSR and to take that Force car out in the final with John driving it.”

The win was the 258th for DSR.  Beckman entered the final with a healthy 23-8 career record against foe John Force, and he left with 24 round wins over the 16-time champ.  The two left the line with identical reaction times but Beckman quickly pulled away in his Mopar-powered Funny Car, taking out Force with a 4.190 ET, 293.92 mph to his opponent’s time 4.291 seconds, 258.96 mph.

The triumph was also the 19th of his career, moving him to tenth on the all-time Funny Car win list past Ed McCulloch, Mark Oswald and active drivers Tim Wilkerson and teammate Matt Hagan.  A Dodge has reached the final round at 13 of 14 events this season.  Hagan still has a big lead of 145 points over Beckman in the standings. 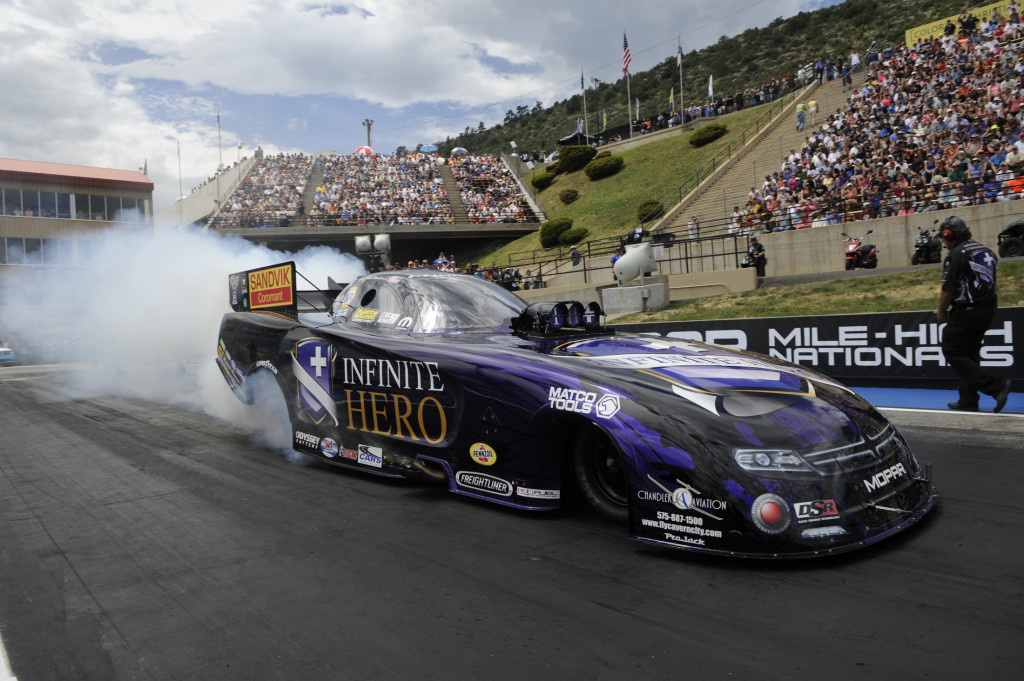 Larry Morgan and Allen Johnson sat in the pre-stage beams for more than 90 seconds before Johnson finally staged.  Morgan was first off the line and held on for his second win of the season, snapping Johnson’s three-race Denver winning streak.

“I got on the radio about one minute into the stage and I told my guys, ‘I guess Allen just doesn’t want to stage,’ ” Morgan said.  “Allen has owned this hill, and he deserves it because he has done one hell of a job up here.  You know, we put on a good race in the final, and that guy has no reason to hang his head.  He owned this place and I just borrowed it for a week.”

“It was good for the fans,” Morgan said of the staging battle.  “And it was a lot of fun for us.”

Morgan tested with his Gray Motorsports Chevrolet last week, completing several successful passes on the mountain.  That speed continued this weekend, when he qualified No. 2 with one of the quickest cars of the weekend.

“We ran good every run,” Morgan said.  “It seemed like everything we did fell into place. We couldn’t make a bad run.  I was so excited to get back up here I couldn’t stand it because I thought we were really going to do well up here and we did.

Morgan started the day with a victory over Joey Grose, then Jason Line on a rare holeshot victory and in the semi-finals taking down the champ, Erica Enders-Stevens. 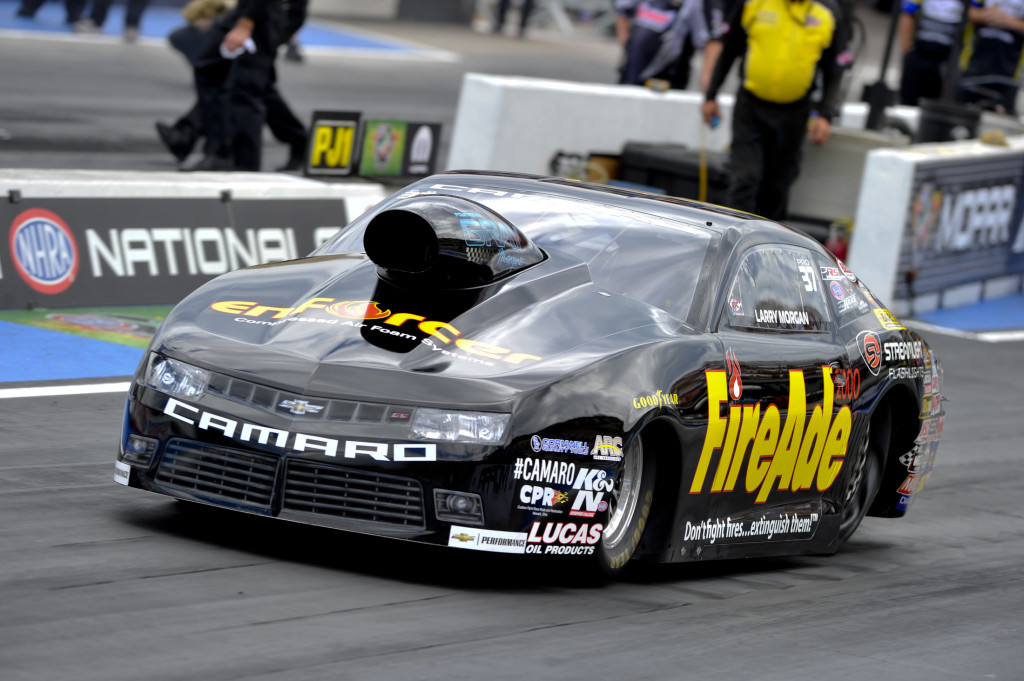 Eddie Krawiec raced to his 28th career victory in Pro Stock Motorcycle with a 7.239 at 185.51 mph holeshot final round result over Hector Arana Jr. on his Vance & Hines Harley-Davidson.  The current Pro Stock Motorcycle points leader earned his first win of the season and third at Bandimere Speedway.

“In the final, I could hear him next to me,” said Krawiec, a three-time world champ.  “I will say one thing; I knew I had to be about .020 on the Tree, and I was .025.  I usually don’t race that way.  I don’t usually have to push that hard, but this year I do.  I really didn’t want the final to be that close, but I couldn’t ask for any better.  It always makes the driver look good to win on a holeshot.”

Next up for the NHRA Mello Yello Drag Racing Series is the second leg of the famed “Western Swing,” the NHRA Sonoma Nationals, scheduled for July 31 – August 2 at Sonoma Raceway in Sonoma, California 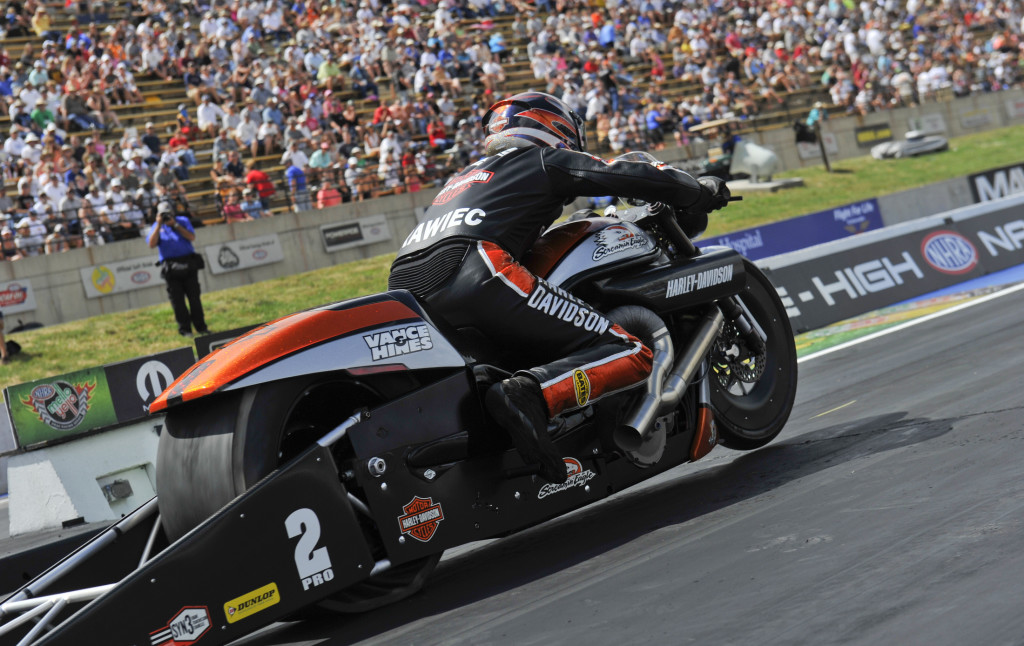