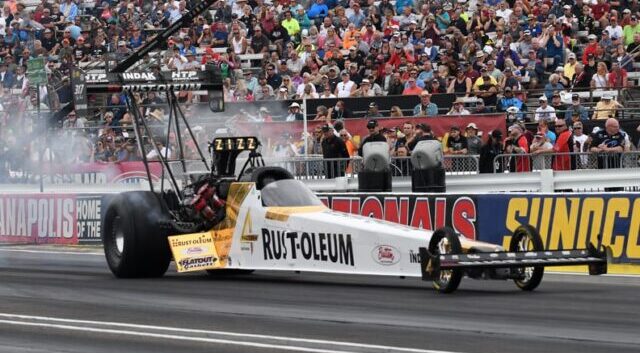 There are NHRA teams that show up for races in the area of the country where they are based. The long hauls for nitro-based Top Fuel and Funny Car teams and the costs of taking a crew of six to eight on the road is usually too much for some of them, so we only get to see these locals when they are, well, local.

One such team is Chicago area-based Zizzo Racing, who have performed over their weight in the three races contested thus far in the 24-contest 2019 NHRA Mello Yello Top Fuel season. With sponsorship from Rust-Oleum, driver TJ Zizzo’s dragster is always presented well and, like all of his pit-side neighbors, he’s wonderful with fans who stop by to learn more about his program.

This season, TJ Zizzo made the long trip across nearly half the country to participate in the 50th annual Amalie Motor Oil NHRA Gatornationals in March. He qualified ninth, with three of his four qualifying runs down the 1,000-foot dragstrip posted in the sevens – that’s 3.7 seconds for all but one pass. That’s plenty stout when only two racers, No. 1 qualifier Brittany Force and Mike Salinas turned 3.6-sec laps.

Zizzo won his first round matchup against Scott Palmer and beat Brittany Force with a holeshot in the second round, only to fall to eventual race winner (for the second consecutive year), Team Kalitta’s Richie Crampton. For Zizzo it was a very satisfying weekend. 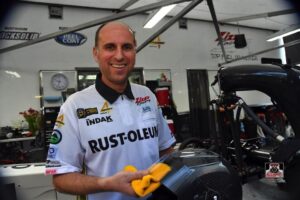 His second race was at home, the Route 66 NHRA Nationals in Joliet where Zizzo made it down the track well in the second and third qualifying sessions, good for ninth again. He met up with and out-ran Don Schumacher Racing’s Leah Pritchett in the first round but fell to the No. 1 qualifier, Mike Salinas in the quarter-finals.

The Chevrolet Performance U.S. Nationals over Labor Day weekend has always been a draw for the Zizzo team and this year’s 65th annual race was even more of a “must” for the family and team. With an overflow entry and five opportunities to qualify for the biggest contest of the year, Zizzo made it into the field but was taken out by Force, again the No. 1 qualifier for this race. Indy was the 16th time the 2017 NHRA Top Fuel champ has earned No. 1.

And now it’s time for one more, as the NHRA encamps at World Wide Technology Raceway at Gateway, the dragstrip in Madison, Ill. with sightlines to St. Louis. This weekend TJ Zizzo’s Rust-Oleum Rocket, as he’s named it, is entered in the second race of NHRA’s Countdown to the Championship, the AAA NHRA Midwest Nationals.

“Let me just say how we’re still honored to have been part of that field at Indy,” Zizzo said of being part of the fastest NHRA Top Fuel field in the history of the sport. “It doesn’t escape us how huge a deal that was and still is. But after the success we saw at the Gatornationals and our home track in Joliet, we felt like we left some things on the track at Indy. Losing to Brittany Force, the top qualifier, in the first round isn’t embarrassing but we just felt we could have done better.”

The team has new ideas to try out and some new parts have been installed in their dragster. And Rust-Oleum has signed on for this fourth race of their season. “We had only planned on running three races this year,” the former IHRA Top Fuel championship runner-up said, “so to come to St. Louis is a little unexpected. We have folks who have been with us for years and literally decades. I couldn’t do this without them and we’re looking forward to having one more chance to show the world that independent teams can compete with the big boys.”

That ideology isn’t really far off the mark, considering this year’s Top Fuel champion is from a family-owned, mostly single-car team (Steve Torrence). There are others who compete when they have the backing and stay home when they don’t. But TJ Zizzo has had a – mostly – break out year in 2019. Let’s see if he can make this field with 19 dragsters on the grounds. And then go rounds. Qualifying begins Friday afternoon at 4PM CDT.