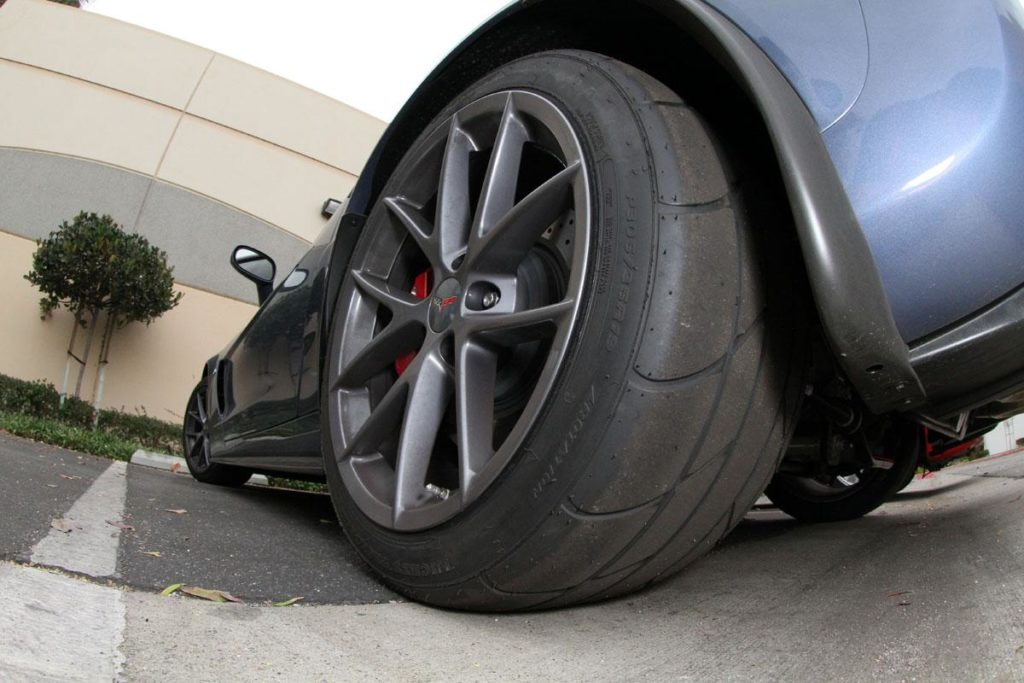 In recent years, the off-the-shelf drag radial tire has become a massive hit, and for good reason. Anyone familiar with firing their Ford down the dragstrip knows what a bottomless money pit the sport can become. As many of drag racing’s participants are humble folks who don’t have a Swiss bank account from which to draw funds, finding ways to save money while remaining competitive is a wonderful way to move forward.

The drag radial could be described as a “great equalizer.” Simply put, the drag radial is accessible to most, and it can only realistically handle so much horsepower. Because the driver with the deepest pockets can build an engine with quad-digit power, if they have the tire that’s capable of harnessing that sort of monumental thrust, then they’ll likely be at the sharp end of the pack. 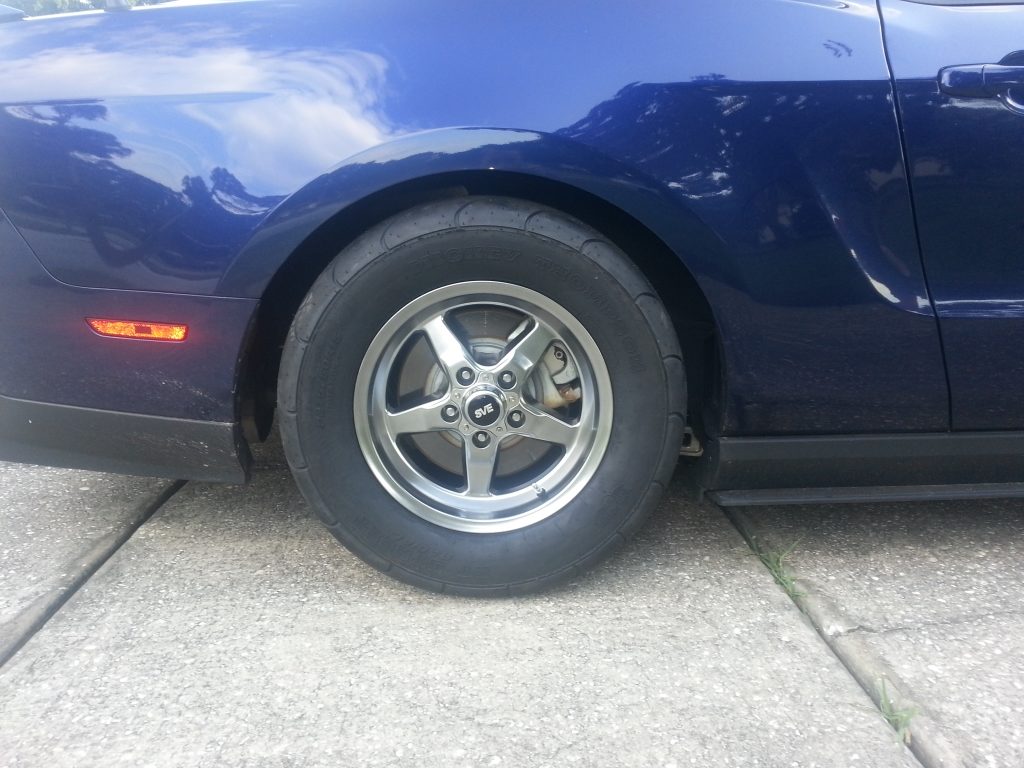 In the interests of parity between drivers on a grassroots level, the drag radial limits how much power one can use without spinning their wheels the entire length of the drag strip. Though it varies somewhat, what a set of off-the-shelf radials can realistically manage is somewhere around 800 horsepower; anything greater than that will only vaporize the tires. That isn’t their only appeal, however.

Big slicks might last a dedicated drag racer a season before they really start to wear away. This resilience has a lot to do with the sheer size of the tire, as well as the tall sidewalls which deflect the load and reduce the abuse. Essentially, more flex equates to less wheelspin, but that is only good for going in a straight line. Wrinkle-wall slicks do no good when trying to corner. 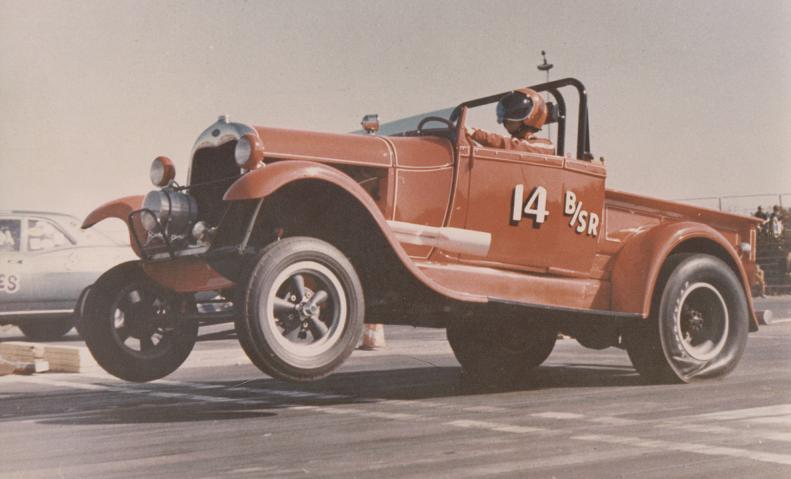 However, fitting a 15” tire underneath the fenders of a car is a chore, and with the way anything that broad will tramline, it’s not a viable option for the street. In contrast, 10.5” slicks or narrower, which are roughly categorized as “small” slicks, can be put on some street cars and perform well when used at the track. They are more of a chore to get to operating temperature, and they don’t offer the same overall levels of grip as big slicks will.

Additionally, the small slicks’ lifespan is remarkably shorter – just a handful of passes at the track. It’s a very specific tire for a specific goal, since it can’t be used on the street – legally, anyways. For those looking for a versatile, semi-effortless setup at a reasonable cost, the drag radial offers a good compromise between those three categories.

The Best of All Worlds

Not only do the stiffer sidewalls of drag radial tires offer reasonable cornering performance, they’re semi-durable for a sport tire, too. Soft compounds mean a decent set of off-the-shell drag radials will last a prudent driver anywhere from 2,000-6,000 miles, though users of the Nitto NT555R have reported as many as 10,000-15,000 miles on the street; however, it takes a very disciplined person to not test their performance stoplight-to-stoplight. 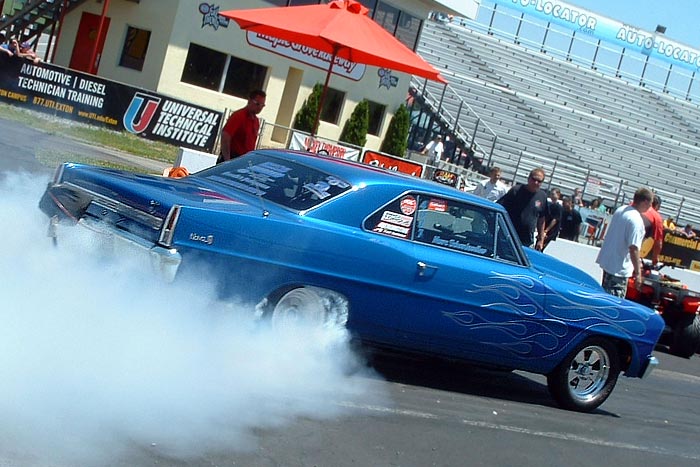 They’re somewhat finicky. The key is to make sure they’re not overinflated, which leads to the center of the tire getting worn out prematurely. Of course, they’re not as capable in the rain with their minimal tread, but some brands seem to fare well enough. That said, a drag radial is really a dry weather tire, despite what some of the manufacturers claim. Generally speaking, they perform well enough to offer 6 to 8 competitive weekends at the track along with the street-driven miles.

In summary, the ease of use is what started the draw. Not needing to change out for a set of slicks and having some of that dragstrip performance on the road is not an unappealing set of traits. Plus, they’ve become semi-usable in adverse conditions, and though it’s cleverer to confine their use to dryer days, they won’t necessarily leave you stranded or spun in standing water; anyone brave enough should tread carefully. With their reasonable lifespan and ability to – with a good suspension setup – put down as much as 800 horsepower, they offer more than enough performance for most weekend hobbyists and don’t break the bank. It should be said, though, that with big power it can be a wild ride – and it’s not always clear whether they’re hooking until the car is about 400 feet down the strip.