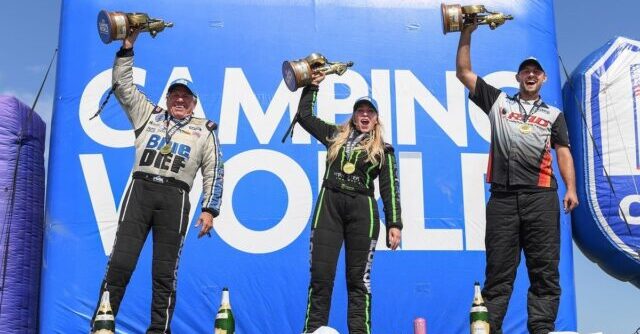 “Dorothy we are in Kansas and there is no better place to be” is sure to be what the whole John Force Racing family was thinking following Sunday’s final elimination round at the Menards NHRA Nationals presented by PetArmor at Heartland Motorsports Park. Beginning with Brittany Force, who earned her first victory after taking down Clay Millican in Sunday’s final round. The success of this drag racing family continued after the king was back on his throne after John Force put another impressive stamp on his 2021 season on Sunday at Heartland Motorsports Park after driving past J.R. Todd in Sunday’s final round to win the Menards NHRA Nationals. While the experienced Force family dominated most of the weekend at Heartland Motorsports Park, a rookie driver would be all the rage in the Pro Stock series. After a perfect .000 on the starting line, Dallas Glenn took down his KB Racing teammate Kyle Koretsky in Sunday’s final round. 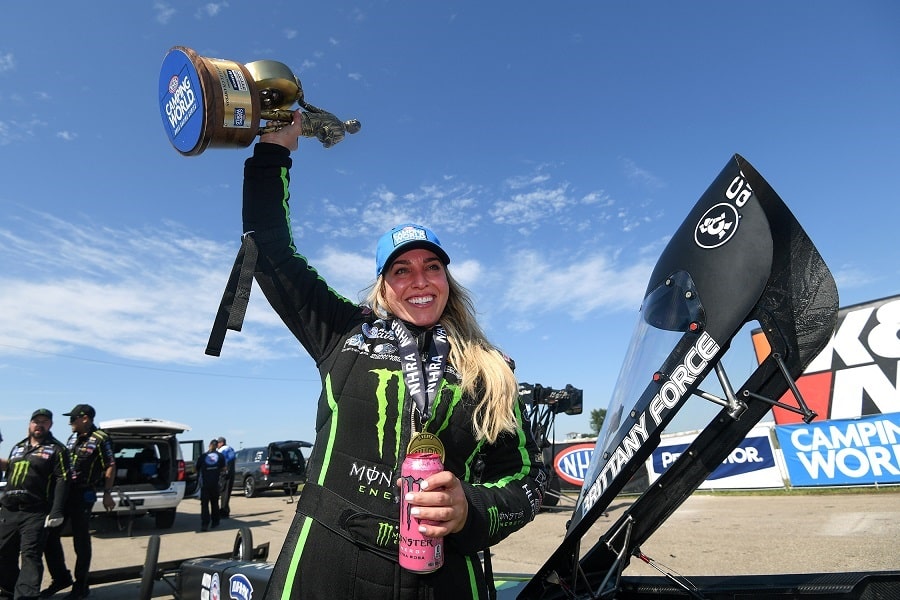 To earn her first win since 2019 and the 11th of her career, Brittany Force took her No. 1 qualifying spot onto battles against Scott Palmer and even Top Fuel points leader Steve Torrence during Sunday’s elimination rounds. Despite the king of Top Fuel putting up one heck of an effort in Sunday’s semifinal round, with his 3.814-second pass at 317.87 MPH, it was Force who finally found her way past her nemesis thanks to a 3.769-second pass at 326.24 MPH. Following this huge moment, Force continued her winning ways on Sunday as she lined up alongside Clay Millican for Sunday’s final round. Although this is often where the Queen of John Force Racing falls short, this was definitely not the case on Sunday. Instead, Force’s 3.783-second pass took down Millican’s 3.830-second effort to end the driver’s winless season streak.

“It has been tough on us this season,” said Force. “We have had a good season and we are even number two in points, but we have remained winless on race day until this weekend. We knew our luck was eventually going to turn around and for it to be this weekend alongside my dad was definitely a bucket list item.” 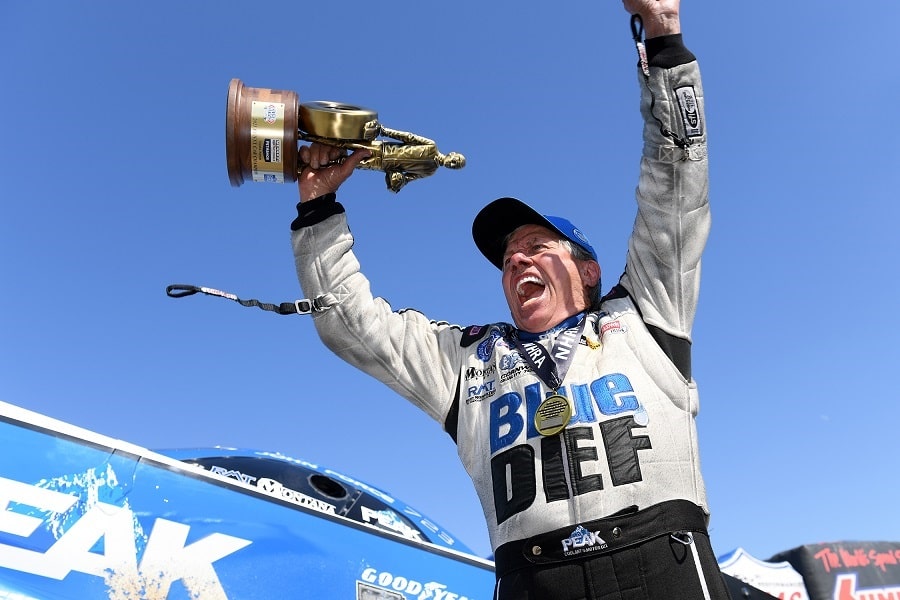 Brittany Force wouldn’t be the only Force Racing success story of the weekend. In his 800th career start, John Force would race to his third victory of the season and 154th in his career, by far the most in NHRA history. After a remarkable weekend that involved wins against Paul Lee, teammate Robert Hight and longtime rival Cruz Pedregon to reach his fourth final round this season, Force was impressively consistent, running in the mid-3.90s both Saturday in qualifying and early on Sunday before knocking off Pedregon with a 4.005-second pass at 321.35 MPH in Sunday’s semifinals. This would lead to one last battle against fellow Funny Car champion J.R. Todd in Sunday’s final round. Despite Todd’s best laid plans Force put another impressive stamp on his 2021 season with a final pass of 4.019-seconds at 321.04 MPH in his 11,000-horsepower PEAK Blue DEF Platinum Chevrolet Camaro SS to join his daughter in the winner’s circle for the very first time.

“This experience was really special to me,” said Force. “With Courtney and Ashley, I never got this chance because they were always in a Funny Car in the finals, and they usually beat me. So, to have the chance to stand next to one of my kids here is a dream come true.”

Thanks to yet another victory, Force moving into the points lead for the first time since the 2014 season as he and his John Force Racing team race into the Lucas Oil NHRA Nationals at Brainerd International Raceway. 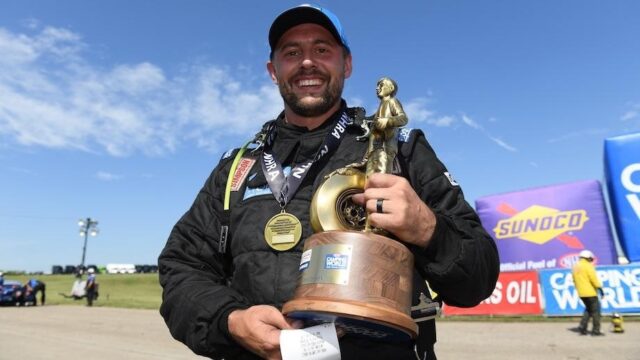 Although John Force Racing was all the rage this weekend, Sunday’s final round in the Pro Stock division gave KB Racing’s rookie driver, Dallas Glenn the opportunity to race to his first division victory. It had already been a banner rookie season for Glenn even before arriving in Topeka, but the young standout raised his game even more this weekend. After qualifying fourth, Glenn reached his third final round on the strength of round wins against Deric Kramer, Matt Hartford, and No. 1 qualifier Troy Coughlin Jr. He was lethal on the starting line, as usual, all weekend posting an impressive .006 in the semifinals against Coughlin. That set up a teammate versus teammate duel in Sunday’s final round. Facing off with KB Racing teammate Kyle Koretsky in the championship round, Glenn decided to dial it up even more. Although Koretsky was quicker at 6.651-seconds at 206.13 MPH, but was no match for Glenn’s perfect light, which made Glenn the sixth Pro Stock driver in NHRA history to win the final round with a perfect reaction time.

“It is really hard to put this win into words other than saying that this is a win come true,” said Glenn. “I have had a lot of highs and lows this season, but I felt like I did my job really well and the car is just working really good right now. I am really excited for the rest of this season following this win.”

The 2021 NHRA Mello Yello Drag Racing Series season will continue as the Force family will have the opportunity to relive their dream come true weekend at the Lucas Oil NHRA Nationals at Brainerd International Raceway (Aug 18-22). Stay tuned to RacingJunk.com for the latest news from the drag strip!