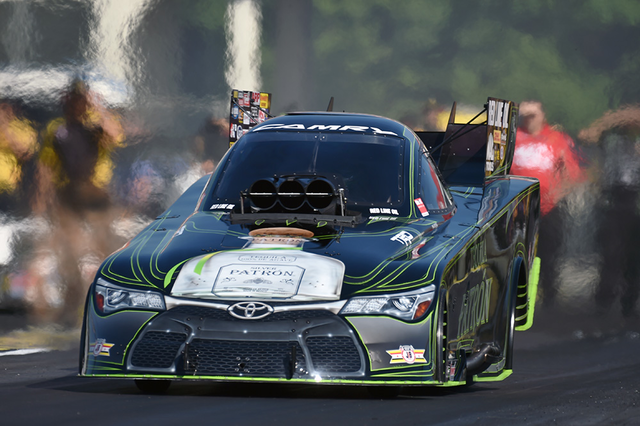 In order for the Kalitta Motorsports Tequila Patrón Funny Car team to return back to NHRA competition following Alexis DeJoria’s crash at Sonoma Raceway last month, both DeJoria and her car needed time away from the track to repair and recover. DeJoria required healing time for a fractured pelvis and her Patrón Toyota Camry needed repair following structural damage to the body and chassis.

Members of the Tequila Patrón Funny Car team have worked tirelessly upon returning to Kalitta Motorsports headquarters in Ypsilanti, Michigan following the crash that sidelined DeJoria and her team for the past two NHRA Mello Drag Racing Series events. After front-halving two chassis and preparing DeJoria’s repaired Toyota Camry body, Team Patrón, led by crew chiefs Tommy DeLago and Glen Huszar, feels confident that they have a car that’s ready to return to the race track.

This week, the NHRA hosts their annual open Indianapolis test session which gives teams the opportunity to test equipment and tune-up combinations prior to the NHRA U.S. Nationals. The test session offers DeLago the opportunity to make test runs with DeJoria’s newly rebuilt Funny Car. DeJoria’s teammate and mentor Del Worsham will pilot her Patrón Toyota Camry at the Indianapolis test session while DeJoria continues to undergo physical therapy and focus on her rehabilitation.

“We want to make sure this car is 100% ready for Alexis when she is prepared to make her return,” said DeLago.

“Putting Del in the seat gives us the opportunity to knock the rust off and make sure any gremlins are sorted out while Alexis continues to recover. We’re still hoping and planning on racing at Indy next week. Whether it’s Indy or not, we’ll know with complete confidence that we’re entering our first race back with a car that is ready to compete with the best of them.”

DeLago plans on making eight test runs with Worsham over the course of Wednesday, August 24 and Thursday, August 25. The newly front-halved Kalitta Motorsports’ produced Bounty Hunter chassis will be utilized during the test session and remain as DeJoria’s primary chassis.

Alexis DeJoria and the Kalitta Motorsports Tequila Patrón Toyota Camry Funny Car team are scheduled to compete next at the NHRA U.S. Nationals in Indianapolis, September 2-5, although their entry in the event remains uncertain at this time.