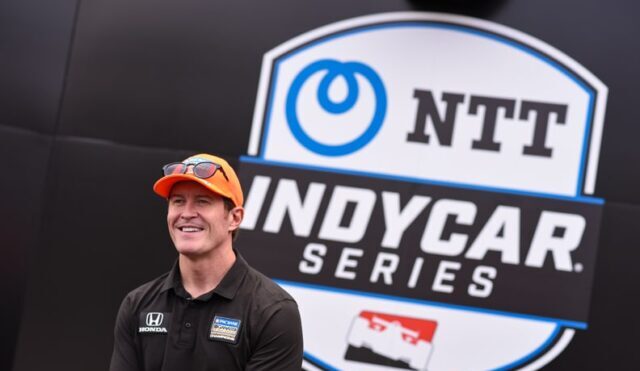 Final practice on Carb Day is complete, albeit a bit later than expected when weather conditions dictated a delayed start to the two-hour test and tune session on Friday afternoon. Instead of finishing at 1PM, the session began half an hour later and ran with no on-track stoppages. It was the weather that ended Carb Day practice with around ten minutes remaining.

Scott Dixon’s Chip Ganassi Racing (CGR)-prepared Honda-powered Dallara led nearly from the start and parked after about an hour’s worth of testing the 2.5-mile Indianapolis Motor Speedway, after lapping at 228.323mph. Team Penske’s Simon Pagenaud and Josef Newgarden followed on the speed charts with their Chevy-powered cars, followed by the Ed Carpenter Racing (ECR) entry for Conor Daly, the second-generation racer who normally drives the No. 20 for ECR on the road and street courses. 2020 pole man Marco Andretti was fifth-quick to lead the six-car Andretti Autosport Honda-equipped grouping. 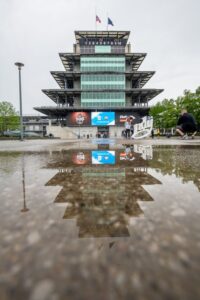 After all his trouble in qualifying, Will Power was sixth for Team Penske, followed by his rookie teammate Scott McLaughlin, by CGR’s Tony Kanaan, the reigning Indy 500 winner Takuma Sato for Rahal Letterman Lanigan’s Honda three-car entry and Sage Karam, who races with Dreyer & Reinbold and was one of the few part-timers to practice well. That was the top 10, but really, it doesn’t matter very much because every single one of the 33 qualified cars and drivers were working on different attempts to prepare for their 200 trips around the Brickyard oval.

Even the rear of the field doesn’t mean much: Pietro Fittipaldi was 33rd (Honda), Simona de Silvestro 32nd (Chevy), Rinus VeeKay and Ed Carpenter are 31st and 30th, respectively, on the Friday afternoon speed charts, with Jack Harvey, Colton Herta, Santino Ferrucci and Stefan Wilson helping to bring up the rear. Herta was super-pleased with his car, even without the speed: “I think we have a great race car to be in it on Sunday. We’re trying to figure out a way to break the draft,” he told NBC. Remember that Herta’s strategist, his father Bryan, took two drivers to the BorgWarner trophy in five-year spans: Dan Wheldon in 2011; Alexander Rossi in 2016. This year’s race is just a day behind both of those victories for Herta. 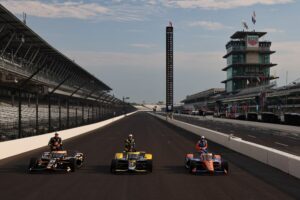 While some, including INDYCAR’s media relations department, consider Dixon’s stay atop the timing pylon during this final practice his statement of being a favorite to win his second race here in Indianapolis, the 500 is more like a chess tournament at speed – no matter how good or how prepared a driver and team might be, sitting on pole, leading the most laps just doesn’t mean a driver will win the race. 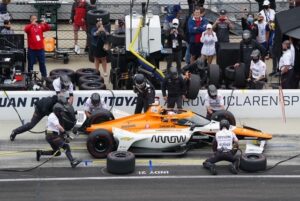 With all the rain – continuing in the late afternoon – temperatures were in the high 50s and low 60s for much of the two-hour practice. There was also more than a little wind to mix things up as the 33 cars completed 2353 laps of the historic oval track. There were plenty of near-misses during the two hours but that was about it. In one instance, Ferrucci pushed Daly to the edge of the track, earning some comments for the Connecticut racer from Daly: “The guy nearly crashed in the same place, then blocks me all the way to the grass. I know he thinks he’s a hero, but there’s no point in doing that. This is practice; it’s unnecessary.”

There are plenty of obligations for the drivers before they take the green flags on Sunday at about 12:45PM EDT, including visits to homes that are decorated for the 500 by a variety of racers, rather than Saturday’s parade. And Indy, as it always does, will salute legends of the sport on Saturday at the track.

Race-day action starts with the traditional cannon firing opening the gates to the 135,000 allowed fans (about 40% of capacity) at 6AM and cars get pushed to pit lane beginning at 8 prior to their initial engine warm-ups at 9:15 – there’s a second warm-up at 11:35AM. . By the time “Back Home Again in Indiana” is sung, the national anthem regaled and balloons released, even the longest-serving participants on-site will be enthralled. The three-hour contest is being shown nationally on NBC.