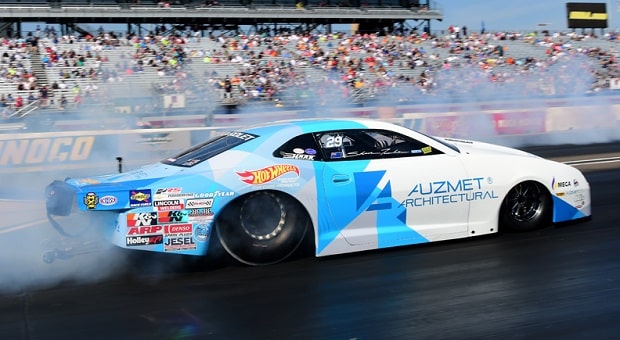 Maybe there is some hope for NHRA’s Pro Stock class, now that it has contracted from 24 to 18 races for the upcoming 2019 season? During last weekend’s Performance Racing Industry (PRI) trade show in Indianapolis, there was some good news, and that continues into the week.

Shane Tucker, the Australian who has competed in several events from year to year in the USA, will make a full-season charge with Rob Tucker Racing, which is joining forces with established, champion engine builder Nick Ferri to provide power for Tucker’s Auzmet Architectural Chevrolet Camaro.

With the fight for Pro Stock expected to be wide open now that reigning titleholder Tanner Gray is exiting for the NASCAR ranks, the Statesville, North Carolina-based Rob Tucker Racing team has decided a full-season run dedicated to qualifying for NHRA’s Countdown to the Championship six-race playoffs is within reach. Especially with the addition of Ferri’s engine-building and consultation expertise.

“We have been working on our own for a number of years with some assistance here and there,” explained driver Shane Tucker. “We were building our Auzmet Architectural business here in the States, so we could only run select events.”

Nick Ferri Racing, located in Colorado, will supply engines and consult with Tucker and his team on set-ups.

“We are excited to finally be able to focus a little more on racing and working with Nick Ferri Racing shows how serious we are,” Tucker continued. “Nick has done amazing things with previous world champions and we have that same kind of championship attitude here at Rob Tucker Racing.”

“We have had a lot of success with our engine building programs and I am excited to join forces with Rob Tucker Racing starting in 2019,” Ferri said. “The passion and determination Rob and Shane Tucker have shown over the years gives me a lot of confidence we can build a partnership that will win a lot of races.” This is not an exclusive agreement; Ferri’s engines are being made available to other Pro Stock teams for the 2019 NHRA campaign.