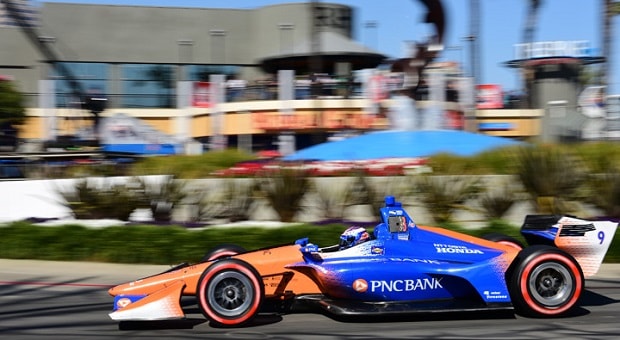 Verizon IndyCar Series driver Scott Dixon is known as the “Ice Man” for his cool demeanor under the pressure of competition. Since winning his first IndyCar race at Nazareth in 2001, the New Zealand native has amassed a total of 41 victories, ranking him fourth in all-time standings, behind retired legends A.J. Foyt (67), Mario Andretti (52) and Michael Andretti with 42.

Dixon won the 2008 Indianapolis 500 and owns four series championships. He’s considered the top gun among veterans in the series and is primed to add to that win total this weekend in the Honda Indy Grand Prix of Alabama at Barber Motorsports Park outside Birmingham. While Dixon has finished on podium all years but one at this track, he’s still looking for his first victory on the 17-corner, 2.3-mile Barber track.

But now Dixon is primed to take on a new type of competition, as he competes in NBC’s hit series, “American Ninja Warrior” during the program’s city finals qualifier at Indianapolis on April 29-30. The program, which gives athletes a course of obstacles to tackle, has stymied reigning IndyCar champion Josef Newgarden, 2004 champ Tony Kanaan, three-time Indy 500 winner Helio Castroneves (all in 2016) and, last year, Conor Daly, who competed in the San Antonio qualifier.

Dixon knows it’s going to be tough because the training regimen for his sport is very, very different from what he needs to do to qualify for the American Ninja Warrior finals at Las Vegas later this year. “It’s a show I’ve always loved and enjoyed watching,” Dixon allowed. “My kids Poppy and Tilly love it too. The first day I went and tried it, I’m like, wow, I really can’t do that stuff.

“It’s been a learning process. It’s more about having a go, getting out of your comfort zone. We’ll see what they have, what the challenges are, but definitely looking forward to the process, meeting the people and, hopefully, at least not failing on the first thing.”

While he realizes it might have been better to begin training six months ago, “I think a lot of rock climbing, it’s a lot of just even the fingertips, to how your body is able to twist in different ways. We [drivers] are definitely not a very flexible bunch of people, which plays into it, especially with shoulders, so there’s a lot of movements that have been quite interesting and painful to go through.”

In addition to watching the show, Dixon was on-site in 2016 when his three racing competitors attempted to qualify. Because the show is taped at Monument Circle in downtown Indianapolis and must be filmed at night, “It runs at really strange hours. They run from 8-9PM at night all the way until 6:00 in the morning, so it’s some pretty interesting times.”

In addition to this extracurricular activity, Dixon has two test dates on the 2.5-mile Indianapolis Motor Speedway oval scheduled for April 30th and May 2nd. “It’s going to be a busy week for sure,” he said. “I’m just taking it as an experience, and excited for the opportunity. I just hope I don’t make a fool of myself!”