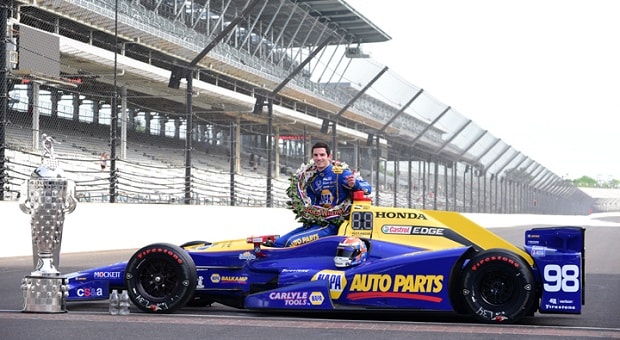 Race cars, even famous ones, don’t always sell at auction for the prices one might expect from championship-winning or other notable competitive machines. Perhaps this just-announced vehicle offered for bid will change that.

The Mecum Auctions Monterey daytime sale of vehicles, set to take place during the week-plus extravaganza celebrating all things mobile in late August, has gained a celebratory vehicle for sale. It’s the winner of the 100th Indianapolis 500, the blue-and-yellow NAPA Honda-powered Dallara DW12 driven by then-rookie American Alexander Rossi to the historic win.

The DW12 chassis number 037 was entered in the Brickyard race by Andretti Herta Autosport with Curb-Agajanian, and has been on display in the Indianapolis Motor Speedway museum since its victory on May 29 in front of an estimated 350,000 attendees of the Greatest Spectacle in Racing.

It is being sold as a rolling chassis, which is normal for most current racecars, but it will have the original Honda V-6 racing engine used in the 100th Indy 500 race, installed once Honda begins prep for the 2021 INDYCAR engine. The new owner also gets a most unusual 100-year engine lease from Honda Performance Development, which owns the intellectual property for this engine. This car/engine combo are capable of 230-mph speeds on the historic Indianapolis 2.5-mile oval.

This very unusual auction entry is no longer owned by its race entrants; it was purchased and is being sold on a bill of sale by an anonymous seller. The DW12-037 chassis was in service from its build date, raced by Alex Tagliani in 2012-2013, by Jack Hawksworth in 2014 and by Gabby Chaves, INDYCAR’s 2015 Rookie of the Year before being assigned to Rossi who, in addition to earning the Indy 500 victory, was named the race’s Rookie of the Year.

All original equipment on this race car remains with it, including the Brembo brakes and Xtrac gearbox. As stated, the original Honda engine will be part of the sales price, albeit not installed for a few years. This lot is expected to fall to gavel on August 25 at the Hyatt Regency Monterey Hotel and Spa on Del Monte Golf Course.

About Anne Proffit 772 Articles
Anne Proffit traces her love of racing - in particular drag racing - to her childhood days in Philadelphia, where Atco Dragway, Englishtown and Maple Grove Raceway were destinations just made for her. As a diversion, she was the first editor of IMSA’s Arrow newsletter, and now writes about and photographs sports cars, Indy cars, Formula 1, MotoGP, NASCAR, Formula Drift, Red Bull Global Rallycross - in addition to her first love of NHRA drag racing. A specialty is a particular admiration for the people that build and tune drag racing engines.