This weekend’s NGK Spark Plugs NHRA Four-Wide Nationals at zMAX Dragway proved nothing short of record-breaking. Along with the Force Racing sisters breaking records at Saturday’s final day of qualifying, two drivers would find an end to their winless streaks on Sunday. 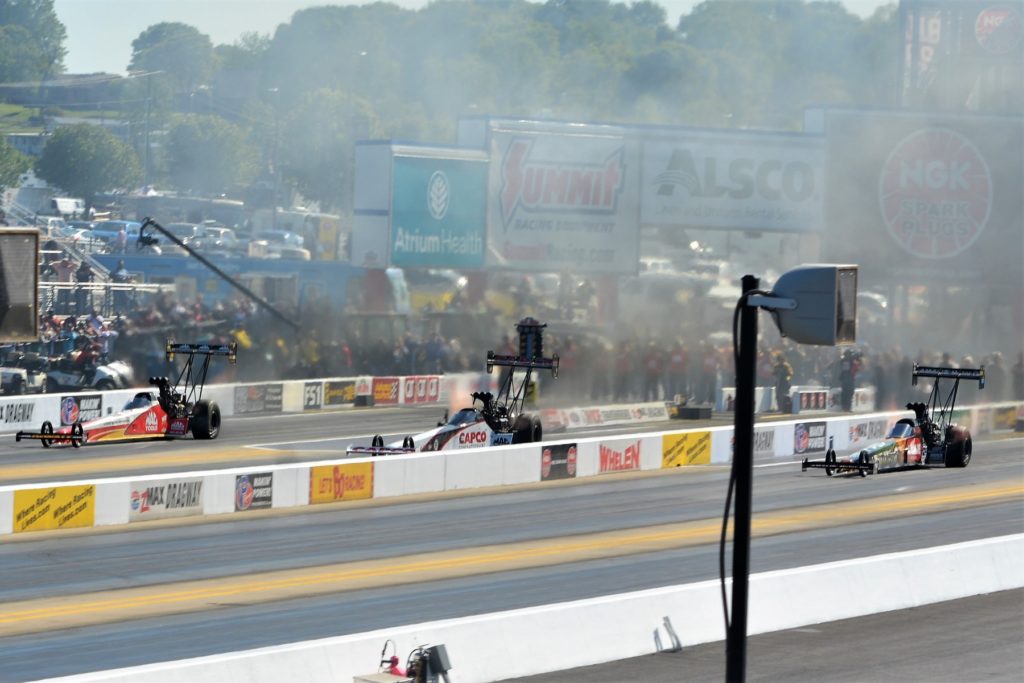 While the John Force Racing family seemed right at home in Charlotte, including Brittany Force who drove to her first No. 1 qualifying spot of the 2018 season with a record breaking run of 3.689-seconds at 318.39 MPH in Saturday’s final qualifying session, things changed during Sunday’s final elimination rounds.

As the final elimination rounds began to dwindle down, it was Torrence Racing’s own Steve Torrence who raced his way to the top of the field. After taking down the driver who he says kept him from the 2017 Top Fuel Championship (Brittany Force), Torrence moved to the final round against Doug Kalitta, Terry McMillen and Clay Millican.

After piloting his Capco Contractors dragster to a 3.813-second pass at 326.56 MPH, the former champion earned his 19th career win and second victory at zMAX Dragway. Although Torrence said that he was the driver to beat this weekend at the Home of Racing, he also admits that this victory would have been nothing without his crew chief Richard Hogan.

“We didn’t really have the best car in qualifying, but my crew chief is really good at adapting to track conditions, whether it’s two lanes or four, and this showed during Sunday’s elimination rounds,” said Torrence. “Of course, it takes a lot more concentration as a driver to go four-wide because it is so different from what we do at most of the other races, but I know that I could not have earned another victory at this track without Hogan and the rest of my team.”

Thanks to his third victory of the season, Torrence takes over the Top Fuel points lead after entering Charlotte in a first-place tie with Tony Schumacher, who was eliminated in Sunday’s first elimination round. 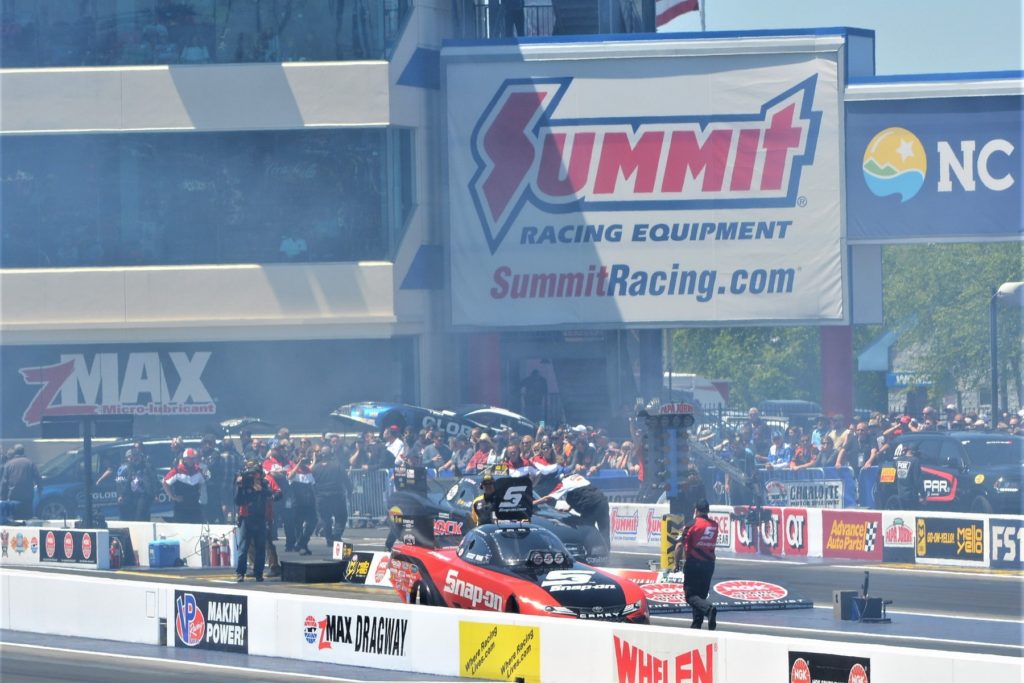 Despite yet another John Force Racing driver earning the No. 1 qualifier position during Saturday’s final qualifying session with an eye-popping qualifying time of 3.873-second pass at 332.92 MPH, Courtney Force’s reign came to an end during Sunday’s final elimination round.

“I knew that we had our work cut out for us when I pulled up to the starting line in the finals, but I actually didn’t believe my ears when my team manager told me that I won,” said Pedregon. “It was surreal, and I have to say that I am still in shock.”

Thanks to his record-breaking win, Pedregon was also able to move past the legendary Don Prudhomme into sole possession of fifth place for all-time in Funny Car victories.
Pro Stock 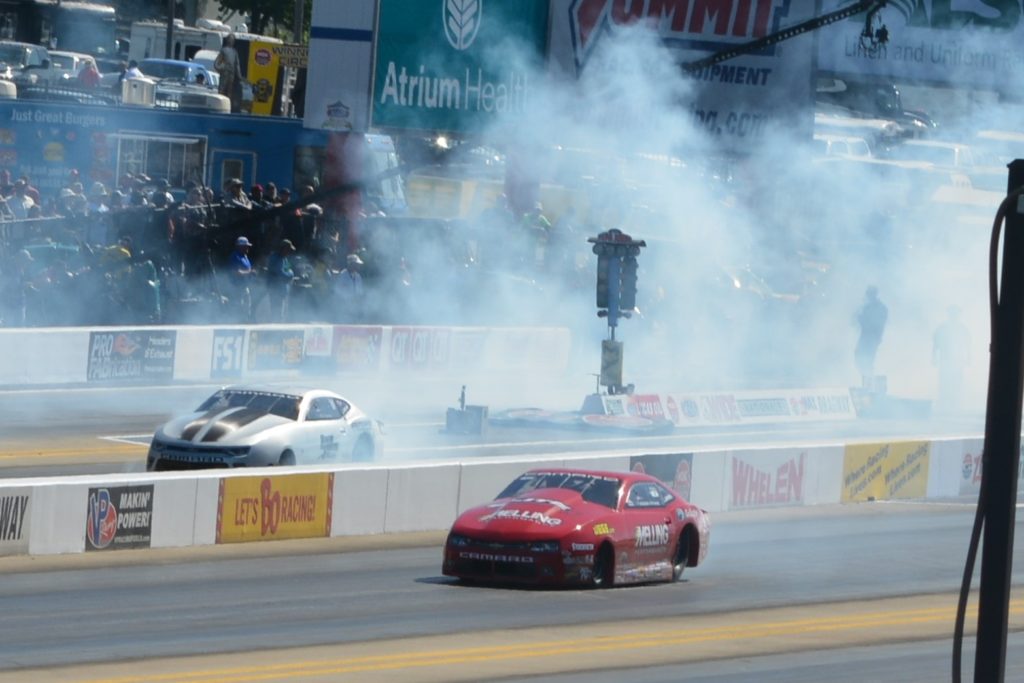 Pedregon was not the only driver to find his way back to the well after what she would consider a long winless drought. Despite Ray Skillman Cheverolet’s own Drew Skillman earning his sixth No. 1 qualifying position of his career, it was Elite Motorsports’ own Erica Enders who battled back for her first win since Epping in 2017.

With a 6.535-second pass at 212.73 MPH in her Melling Performance/Elite Motorsports Chevrolet Camaro, Enders took down Vincent Nobile, Chris McGaha and No. 1 qualifier Drew Skillman in the final round.

“I am really lucky to be a part of this Elite Motorsports team,” said Enders. “We made a car change going into our home race in Houston last week and we made it to the finals, so I had a bit more confidence bringing the same car to Charlotte. Regardless, this was still a tough race and I am so excited to once again be in the Winner’s Spotlight.”

Due to this victory, Enders moves into third place in the Pro Stock point standings behind 2017 Champion Bo Butner.

The 2018 NHRA Mello Yello Drag Racing Series season continues with the NHRA Southern Nationals Powered by Mello Yello at Atlanta Dragway in Atlanta, Ga. (May 4-6). Stay tuned to RacingJunk.com for all your NHRA coverage!