When Erica Enders first started her Pro Stock career, she had very little outside backing from companies. For much of her first five championship NHRA Camping World Drag Racing Series seasons, her primary support has come from Melling companies, whose logos have adorned her red Chevrolet Camaro prepped and serviced by Elite Motorsports.

Prior to the season closer in Pomona this November, Johnson’s Horsepowered Garage announced it would be Enders’ primary backer, in addition to the firm’s support of 2017 Pro Stock champ Bo Butner III. Happy with the work performed by Elite, owner Jason Johnson wanted more exposure, and what better way to gain success than to add a five-time Pro Stock champ to his racing family?

Now another NHRA sponsor is coming onboard to support Enders: SCAG Power Equipment joins the list of prestigious partners for Enders, after being primary sponsor for eight-time NHRA Top Fuel titleholder Tony Schumacher during the 2022 season. This affiliation is in addition to SCAG’s support of Schumacher’s dragster team; the company and Maynard Family Racing signed a three-year deal during this past campaign.

“We have a huge NHRA fan base among our SCAG dealers and end users,” noted Randy Gloede, president and CEO of SCAG Power Equipment. “It has taken me a year to understand just how powerful the connection between us and our SCAG dealers and customers can be at race events. Elite and Erica understand how important this relationship is, as a means of connecting with our customers and we believe we chose a first-class winning team to partner with, to give our SCAG customers the best life experience and thank you possible at the race events,” he said.

Elite Motorsports is also adding to its NHRA workload for 2023, fielding rookie Mason Wright, 38, in the FuelTech Pro Mod Drag Racing Series powered by D Wagon. The Top Sportsman standout, from Odessa, TX, is looking forward to his opportunity, racing an Elite-powered Pro Mod machine in this highly-competitive series. “We’ve always admired Richard (Freeman, Elite Motorsports owner) and the whole team at Elite,” Wright said. “When he called to discuss working together, it was a no-brainer.

“Our [two] daughters are old enough that my wife and I can take them with us,” Wright continued. “Drag racing is all about family and I want to put out a special ‘thank you’ to my dad and brother for wrenching on the car while running a three-car Top Sportsman program, and my wife for supporting me while I get to compete in the greatest sport on earth!”

This turn of events occurred during the Texas NHRA Stampede of Speed preview and FallNationals in Dallas, when Wright intended to test his Top Sportsman Rick Jones Camaro with its 4.9 Noonan and roots blower. Testing was only open to professional racers so Wright decided to obtain his Pro Mod license in the Top Sportsman car – which had previously been used as a Pro Mod racer – getting both his testing accomplished and earning his Pro Mod license simultaneously. After watching the driver at work, Richard Freeman reached out to him to discuss the possibility of partnering in Pro Mod.

“We’ve known the Wright family for years,” Freeman admitted. “When Justin Elkes, owner of Modern Racing and an Elite Motorsports partner, saw Mason run in Pro Mod, he called me and the wheels started to turn. We’re going to start testing in January and we’re excited to see what he can do this year.” Elkes will serve as Wright’s crew chief.

Mountain Motor is how Elite Motorsports’ Richard Freeman entered this sport and, figuring six Pro Stock race cars, a new Pro Mod entry wasn’t enough, he’s adding two Mountain Motor machines to his arsenal for the 2023 season. Freeman purchased J.R. Carr’s program in the class. With 820-cubic-inch engines that can put out nearly 2,000 horsepower, Freeman has a new outlet for himself and for five-time Pro Stock champion Erica Enders to drive.

Frank Gugliotta is joining the Elite Performance team to manage the Mountain Motor Pro Stock program – not the first time Freeman and Gugliotta have worked together – and Carr will remain involved with the program as it evolves. “In 2008 I got my first go at running Pro Stock in ira. It was J.R. Carr, Frank Gugliotta and myself,” Freeman reminisced. “J.R. and I drove, and Frank tuned both machines. J.R. and Frank did well. When I switched gears to 500-inch racing, they continued the Mountain Motor deal,” he explained. “They’ve always remained great friends and we’ve done a lot of business together over the years.”

This new team will be based at Gugliotta’s Maryland shops, but will work closely with the Elite Performance team in Oklahoma. Freeman also purchased Carr’s Ford program, which will move to Elite’s HQs. “We’re going to work on that Ford program and see if we can make something  out of it. It was pretty good back when J.R. was running it,” he said.

“With this acquisition, we’ve got door car racing covered. Whether it’s our 500-inch program, which is arguably one of the best in the country, and now we’ve got our 800-inch program as well. I’ve always had a love for the big motor stuff and was waiting for the time to be right. This is the right time,” Freeman said.

If Pro Stock and Pro Stock Motorcycle have appeared to be third cousins twice removed for NHRA in recent years, the Camping World Drag Racing Series is finally showing some love for both classes, with NHRA All-Star Callout events added to the already-scheduled specialty races in Top Fuel’s and Funny Car’s Pep Boys NHRA All-Star Callouts.

NHRA’s 72nd season begins with the 54th annual Amalie Motor Oil NHRA Gatornationals, with both Top Fuel and Funny Car competing at all 21 races, while Pro Stock takes part in 18 contests and Pro Stock Motorcycle handles appearances at 15 events. All four classes take part in the six-contest Countdown to the Championship playoffs that commence after the U.S. Nationals over Labor Day weekend.

Pro Stock’s All-Star Callout is scheduled as part of the Route 66 NHRA Nationals presented by PEAK Performance at Route 66 Raceway outside Chicago. The Saturday, May 20th event pits eight top drivers against each other in a unique callout format for the single-day specialty race. Pro Stock is on the schedule for the first six races of the year, including the return to Route 66 Raceway, always a fan favorite. The sole Western Swing appearance for this class takes place in Denver.

The two-wheeled All-Star Callout takes place during the final race of NHRA’s famed Western Swing, the DENSO NHRA Sonoma Nationals at Sonoma Raceway on Saturday, July 29th. Also a single-day contest, this Callout features the top eight riders in Pro Stock Motorcycle, with the first round set from a rider callout. In all four of these specialty contests, the driver who makes the quickest pass during the opening salvo gets to select their semifinal opponent. Pro Stock Motorcycle competes in the full Western Swing, taking on the challenge of Pacific Raceways near Seattle for the first time prior to a two-race break before Indy the first week of September. 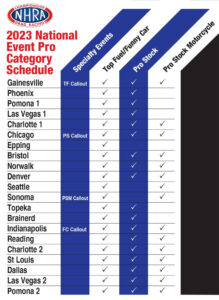