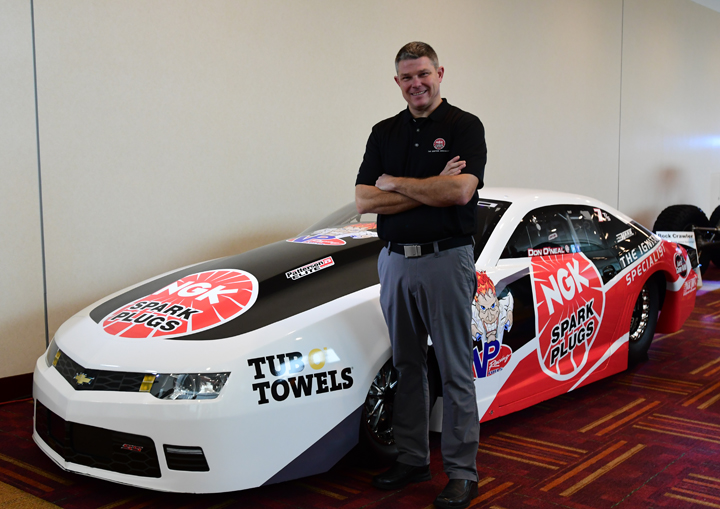 NHRA Top Sportsman racer Don O’Neal unveiled his newest race car during the first day of the Performance Racing Industry (PRI) trade show in Indianapolis. Looking to appeal to the younger race fan and consumer, O’Neal has traded in his 1999 Chevrolet Monte Carlo (“no one without gray hair knows what it is”) for a 2015 NGK-sponsored Chevy Camaro. 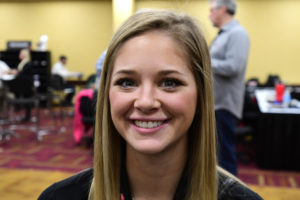 After using NGK spark plugs in his ’99 Monte Carlo’s Big Block Chevy engine with three-stage nitrous for the past five years, O’Neal continues the affiliation. He will also use NTK engine sensors in his new Camaro race car, unveiled this morning. O’Neal finished seventh in NHRA’s 2018 Top Sportsman category and expects this new car and his new alliances will better his prospects for 2019. NTK is a complementary member of the NGK family of brands.

O’Neal’s new 427 LS-powered Camaro uses Ventura, Calif.’s Magnuson Superchargers latest offering, the TVS2650, as the firm steps into the competition realm after working primarily with street and hot-rod clientele over the years. The engine, using NGK plugs, of course, is being built by Patterson Elite Performance of Augusta, Kan. NHRA’s Top Sportsman category is compelling, in that it allows for supercharged, turbocharged and nitrous-injected engines.

“We are making the switch from a car with three stages of nitrous boost to a supercharged car,” O’Neal said, “because we felt today’s customer could better relate to this new set-up. This new engine/vehicle combination allows us to communicate the product message and brand story about NGK and NKT’s OEM quality to everyday people.” 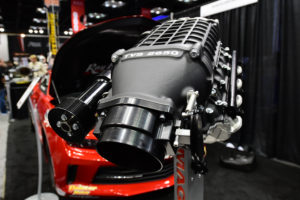 While unveiling O’Neal’s new racecar, which has red NGK identification on the driver’s side and green NTK visuals on the passenger side, NGK also revealed support for the release of its new RUTHENIUM HX spark plug line and branding on 2018 Top Alcohol Dragster champion Megan Meyer’s dragster. The new NGK RUTHENIUM HX offers, the firm said, higher ignitability, enhanced oxidation resistance and increased durability for today’s modern engines. This spark plug uses the precious metal, No. 44 on the periodic chart, and is available for over 200 million road vehicles currently in operation, according to Danielle Orlando, marketing manager for NGK.

About Anne Proffit 945 Articles
Anne Proffit traces her love of racing - in particular drag racing - to her childhood days in Philadelphia, where Atco Dragway, Englishtown and Maple Grove Raceway were destinations just made for her. As a diversion, she was the first editor of IMSA’s Arrow newsletter, and now writes about and photographs sports cars, Indy cars, Formula 1, MotoGP, NASCAR, Formula Drift, Red Bull Global Rallycross - in addition to her first love of NHRA drag racing. A specialty is a particular admiration for the people that build and tune drag racing engines.