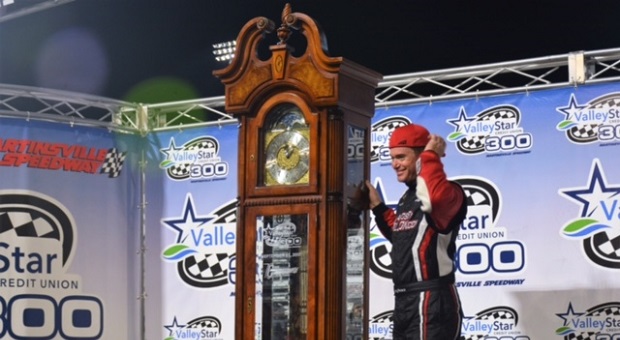 If you tuned into the recent edition Behind The Wheel the podcast, you know that the most prestigious late model race in the Southeast took place this weekend at Martinsville Speedway. Once again, this race didn’t disappoint as a NASCAR star would earn his second legendary victory in the first race under the lights at the paperclip. 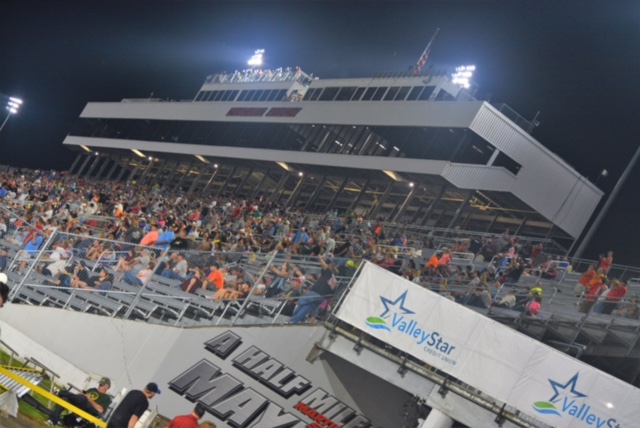 Surviving an 8.5-hour day that started under the hot Virginia sun and eventually under the brand-new LED lights at the half-mile speedway, Peters held off a field of 42 competitors who all wanted a piece of the richest and most prestigious late model win in the country. 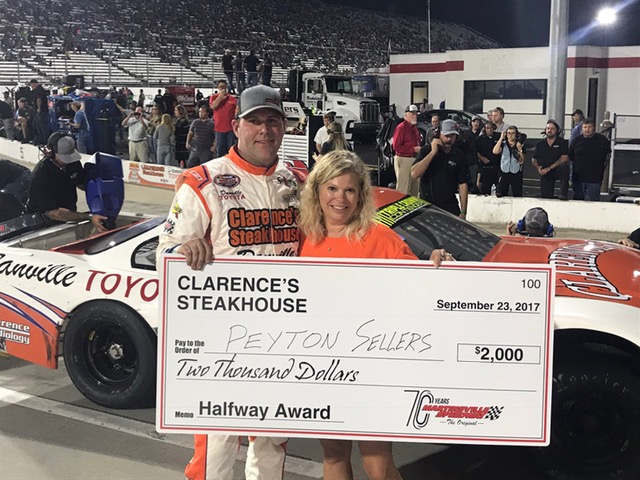 Despite pole-sitter Jake Crum leading the first 90+ laps of this race, South Boston track champion Peyton Sellers would take over the lead on Lap 96 and drive this to the $2,000 halfway award.

Following a five-minute break to refuel and invert the top six cars in the field, the race would resume with Peters leading the way. While the start of this race stayed clean, the second-half would result in millions of dollars damage to more than half the cars in the field. The first inkling of what was to come occurred on Lap 123 where the first of two red flags would wave for an eight-car pile-up that would collect last year’s ValleyStar winner Mike Looney.

“I think some of us got three-wide and checked up in front of Philip Morris in the 01 car,” said Looney. “By the time I saw that they were having trouble I had already run into Morris and kind of finished him off. It was probably my fault, but I couldn’t do anything about it. I didn’t see it.”

After racing ensued, pole-sitter Jake Crum would also find himself spinning in turn four on Lap 135, giving him little chance to fight back for the win. 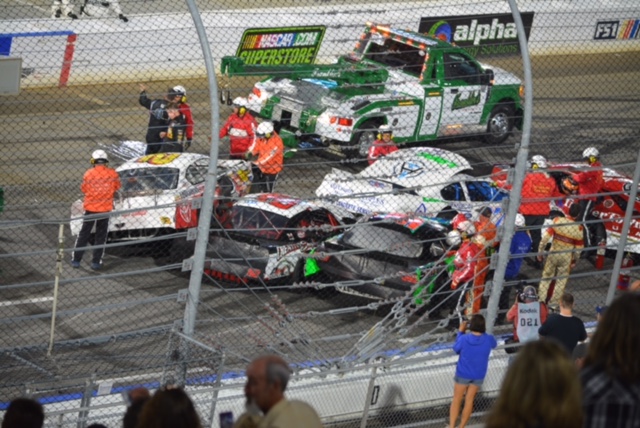 As the laps wound down, the carnage would continue leaving only 25 drivers left to compete for the $25,000 win. On Lap 156 the second of two red flags would wave taking out four additional late model teams, including first-time feature race competitor Trevor Ward.

Once the race resumed halfway leader Peyton Sellers would begin to experience electrical trouble in his No. 26 Clarence’s Steakhouse/Danville Toyota late model.
“My initial thought was that we had a bad battery, but a quick trip to the pits with 26-laps to go revealed that the alternator was letting go,” said Sellers.

While these teams would have a chance to visit pit road with 25 laps remaining, this stop would only allow for a quick splash of fuel if drivers like Sellers wanted a chance at this track’s grandfather clock trophy. While Sellers No. 26 ride would hang on to compete for the race win, now two-time ValleyStar 300 winner Timothy Peters had what it took to put his No. 12 Autos by Nelson/Little Ceaser’s Late Model in Victory Lane. 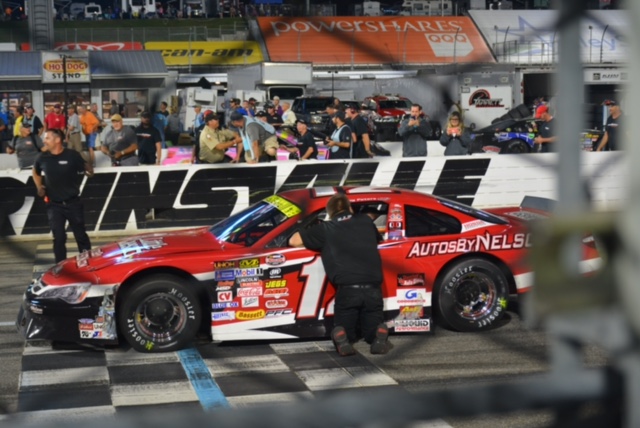 This win couldn’t have come at a better time after Peters lost his ride in the Camping World Truck Series, due to lack of sponsorship, earlier this season.

“It was a very special night,” said Peters. “Winning a legendary race like this under the lights and in front of 20,000 + fans was amazing. This takes away some of the pain from losing my truck ride. Of course, having a ride lined up in Las Vegas helps, but there is nothing like winning a race like this.”

Despite once again being a bridesmaid for this historic race, halfway leader Sellers said that he is proud of his team’s third-place finish behind two-time ValleyStar winner Lee Pulliam.

“We fought hard for this top-five finish,” said Sellers. “I just wish we could have brought the win that I feel this track owes me to prove it. Despite this, I am so proud of my hard-working team for doing everything they could to put me up front.” 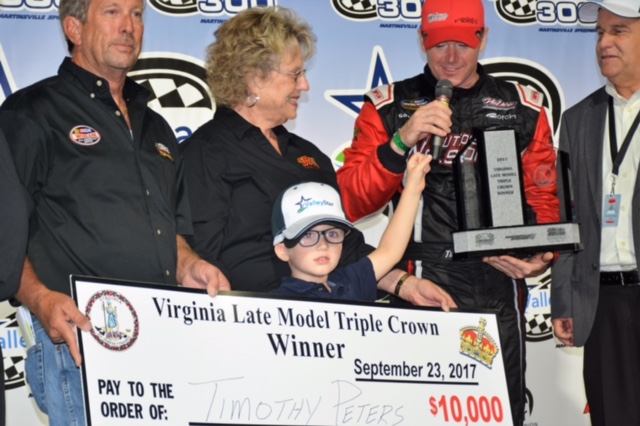 Along with the $25,000 race win, Peters was also named the $10,000 Virginia Late Model Triple Crown winner thanks to this win as well as his added wins at South Boston and Langley Speedway this season.

“I didn’t even expect to win the Triple Crown,” said Peters. “Words can’t fathom what I experienced this weekend. This is all a pretty big deal for me.” 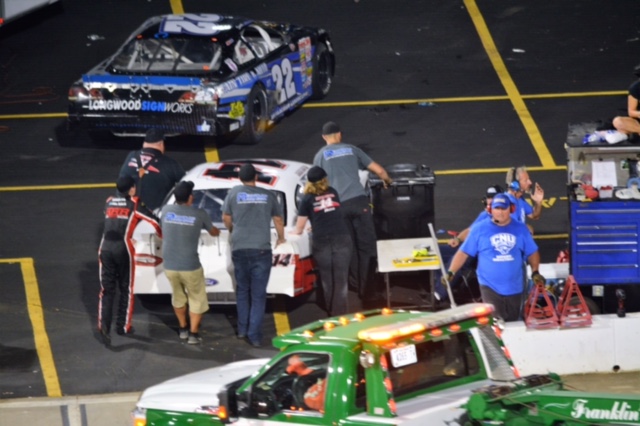 While Peters, Pulliam and Sellers would all have reason to celebrate following this race. Behind The Wheel guest Ryan Repko’s prerace prediction would fall short early in the 200 lap feature. Although this young driver would charge from the back of the field at the start of this race, Lap 30 would lead the No. 14 driver to the garage due to a left brake caliber fire.

“We just had a bit of bad luck,” said Repko. “We started fifth in our heat race, then got up to fourth only to get caught up in someone else’s mess. We then had to fight back from 21st to ninth in the remaining 11 heat race laps to make the feature race. After starting 28th in the feature and passing nine or 10 cars, a left rear brake caliper caught fire only 30 laps in and I had no brakes.”

We at RacingJunk congratulate Timothy Peters and look forward to seeing what the future of the ValleyStar Credit Union 300 holds in store. Stay tuned to RacingJunk.com for details on many home track racing events throughout the country.