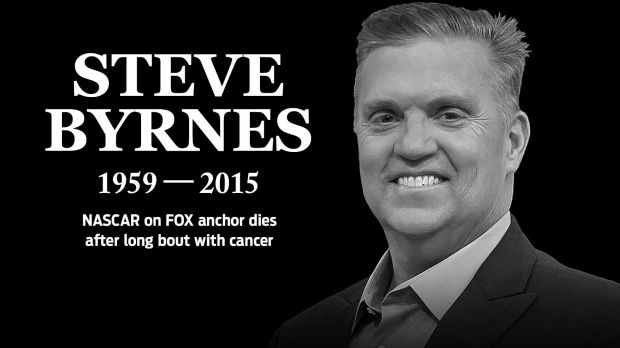 Veteran television sports reporter Steve Byrnes passed away on Tuesday due to complications related to a recurrence of head and neck cancer.

While the broadcaster began his career as a weekend sports producer covering teams like the Washington Redskins, Baltimore Orioles and the Washington Wizards, Byrnes true passion was motorsports.

In 1985, Byrnes was offered his dream job hosting a show that focused on the very sport that he loved the most.  During his time co-hosting Inside Winston Cup  alongside former NASCAR star Ned Jarrett, Byrnes began to develop close relationships with those working in the sport, including many well-known drivers.

As his motorsports media career grew, Byrnes would continue to be one of the leading in-race pit reporters for TNN as well as CBS.

In 2001, Byrnes became a part of the NASCAR on FOX pit reporter team, while also hosting the ever popular post race show ‘Totally NASCAR’, on FOX Sports Net.  As the years passed, Byrnes definitely made his mark on both the NASCAR and motorsports community.

In fact, last Sunday’s Sprint Cup Race at Bristol Motor Speedway was renamed the Food City 500 In Support Of Steve Byrnes And Stand Up To Cancer, in honor of Byrnes and his battle against the devastating disease.

While Byrnes made the decision to retire from the career he loved late last year, after once again being told that he would have to battle a monster that he had already held back just a year before, the love that the motorsports community felt for this inspirational man never ceased.

We at RacingJunk.com send our condolences out to the entire Byrnes family as we also mourn this talented man. Byrnes made an indelible contribution to this sport for both fans and competitors. He was a great guy and will be missed by many.  We will forever stay #ByrnesStrong!