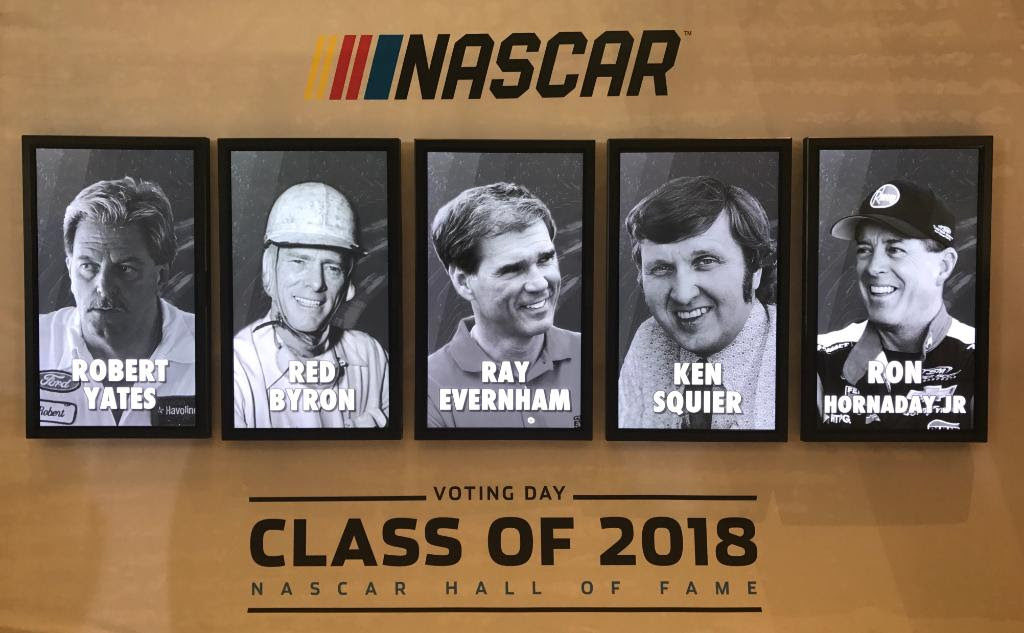 NASCAR announced today the inductees who will comprise the NASCAR Hall of Fame Class of 2018. The five-person group – the ninth since the inception of the NASCAR Hall of Fame in 2010 – consists of Red Byron, Ray Evernham, Ron Hornaday Jr., Ken Squier and Robert Yates. In addition, NASCAR announced that Jim France earned the Landmark Award for Outstanding Contributions to NASCAR.

The NASCAR Hall of Fame Voting Panel met today in a closed session at the Charlotte Convention Center to debate and vote upon the 20 nominees for the induction class of 2018 and the five nominees for the Landmark Award.

The Class of 2018 was determined by votes cast by the Voting Panel, including representatives from NASCAR, the NASCAR Hall of Fame, track owners from major facilities and historic short tracks, media members, manufacturer representatives, retired competitors (drivers, owners, crew chiefs), recognized industry leaders, a nationwide fan vote conducted through NASCAR.com and, for the fourth year, the reigning Monster Energy NASCAR Cup Series champion (Jimmie Johnson). In all, 54 votes were cast, with four additional Voting Panel members recused from voting as potential nominees for induction (Ricky Rudd, Robert Yates, Waddell Wilson and Ken Squier). The accounting firm of EY presided over the tabulation of the votes.

For the second time in Voting Day history, there was a tie for the fifth and final induction spot. Voting Panel members selected Hornaday over Alan Kulwicki after a re-vote between the two nominees.

The next top vote-getters were Buddy Baker and Davey Allison.

Red Byron won NASCAR’s first race in 1948, on the Daytona beach road course. He went on in 1948 to win NASCAR’s first season championship – in the NASCAR Modified Division. The following year, he won NASCAR’s first Strictly Stock title – the precursor to today’s Monster Energy NASCAR Cup Series – driving for NASCAR Hall of Fame car owner Raymond Parks. The Strictly Stock schedule had eight races; Byron won two of them. Wounded in World War II, Byron drove with a special brace attached to the clutch pedal, to assist an injured leg – making his accomplishments even more impressive. That injury contributed to Byron’s relatively brief career, after which he continued to be involved in motorsports.

Crew chief Ray Evernham guided Jeff Gordon and the No. 24 team to three championships in four seasons (1995, ’97, ’98), and a series-leading 47 wins in the 1990’s. Among their triumphs were two Daytona 500s (1997, ’99) and two Brickyard 400s (1994, ’98). Matching Evernham’s mechanical prowess was his innovation on pit road. Under his direction, the “Rainbow Warriors” revolutionized the art of the pit stop. In 2001, Evernham tried his hand at ownership, leading the return of Dodge to NASCAR. His drivers won 13 times, including NASCAR Hall of Famer Bill Elliott’s triumph in the 2002 Brickyard 400.

One of the forefathers of the NASCAR Camping World Truck Series, few drivers can be mentioned in the same breath as Ron Hornaday Jr. when it comes to wheeling a truck around a race track. The second-generation racer from Palmdale, California boasts a record four Truck Series championships and 51 wins competing on the rough-and-tumble circuit. Hornaday also holds the Truck Series all-time marks for top fives (158) and top 10s (234). In 2009, Hornaday won five straight Truck Series races, a feat matched only three other times in NASCAR national series history.

Ken Squier carved a massive footprint during NASCAR’s formative broadcast years. One of NASCAR’s original broadcasters, Squier co-founded the Motor Racing Network (MRN) in 1970. It was his golden voice that took NASCAR to a national audience thirsting for live coverage, giving his insider’s view of what he famously described as “common men doing uncommon things.” He is perhaps best-known for calling the 1979 Daytona 500, a milestone moment for the entire sport, as Squier’s voice on CBS welcomed millions to the first live flag-to-flag coverage of “The Great American Race” – a moniker he coined. Following that signature moment, Squier proceeded to call races for CBS and TBS until 1997 before shifting to the studio as host for NASCAR broadcasts until 2000. In 2012, NASCAR announced the creation of the Squier-Hall Award for NASCAR Media Excellence, which would be housed in the NASCAR Hall of Fame. 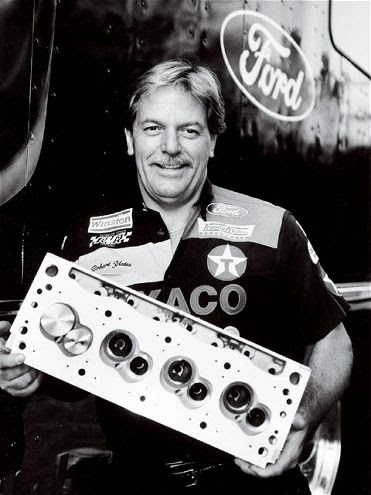 Robert Yates excelled in two aspects of NASCAR that put him among the sport’s greats – engine building (his first love) and team ownership. Yates, who began his career at Holman-Moody Racing in 1968, landed a job with NASCAR Hall of Famer Junior Johnson in 1971 – and the rest is history. He provided the power behind Bobby Allison and Cale Yarborough, later leading Allison to a series championship in 1983 with DiGard Racing. In the late 1980s, Yates launched his own team, Robert Yates Racing. Success followed as an owner as Yates won three Daytona 500s and the 2000 Monster Energy NASCAR Cup Series championship.

James C. (Jim) France is vice chairman/executive vice president of NASCAR and is also chairman of the board at the International Speedway Corporation (ISC). A steady influence behind the scenes for decades, he helped build the sport with his father Bill France Sr., the founder and first president of NASCAR, and brother Bill Jr., NASCAR’s former president, chairman and CEO. Joining ISC in 1959, France worked in all phases of operations in his early years with the company. He was elected to the ISC board in 1970 and has served as the company’s secretary, assistant treasurer, vice president, chief operating officer, executive vice president and president. With a deep passion for the fan experience, France led the DAYTONA RISING project, a $400 million renovation that made Daytona International Speedway the world’s first motorsports stadium.