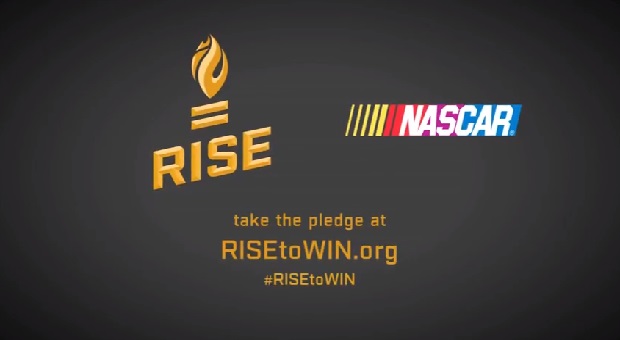 NASCAR and the Ross Initiative in Sports for Equality (RISE) have announced a new campaign that will promote diversity, inclusion, and equality both within and outside of sports. A public service announcement featuring several NASCAR drivers encouraged fans to take the pledge and end racism at RISEtoWin.org.

The growing initiative, founded by Miami Dolphins owner Stephen Ross, was steered in the right direction by NASCAR Chairman and CEO Brian France, a founding member of the RISE Board of Directors.

“Discrimination has no place in our society, which is why we have partnered with RISE and Stephen Ross to help put an end to intolerance in sports,” said France. “With the help of our talented drivers who support this important message, we want to reinforce our sport’s unwavering commitment to promoting diversity and inclusion.”

Last fall, NASCAR joined several major sports leagues in partnering with the new alliance of top leagues, associations, media networks, and educators. France serves on the RISE board alongside the commissioners of the NFL, NBA, NHL, and MLB, and other leading sports executives.

“We believe the ideals and values associated with sports can serve as a unifier for positive change,” said Ross. “I want to thank NASCAR for its commitment to RISE and our mission to advance race relations and drive social progress.”

NASCAR drivers urged sports fans to take the pledge and to treat everyone with respect and dignity and to speak up if they know discrimination is happening.

“It’s important to be part of a PSA that shows athletes taking a stand against discrimination of any kind, and I hope that my participation helps to advocate and influence for an end to discrimination and harassment,” said Jimmie Johnson.