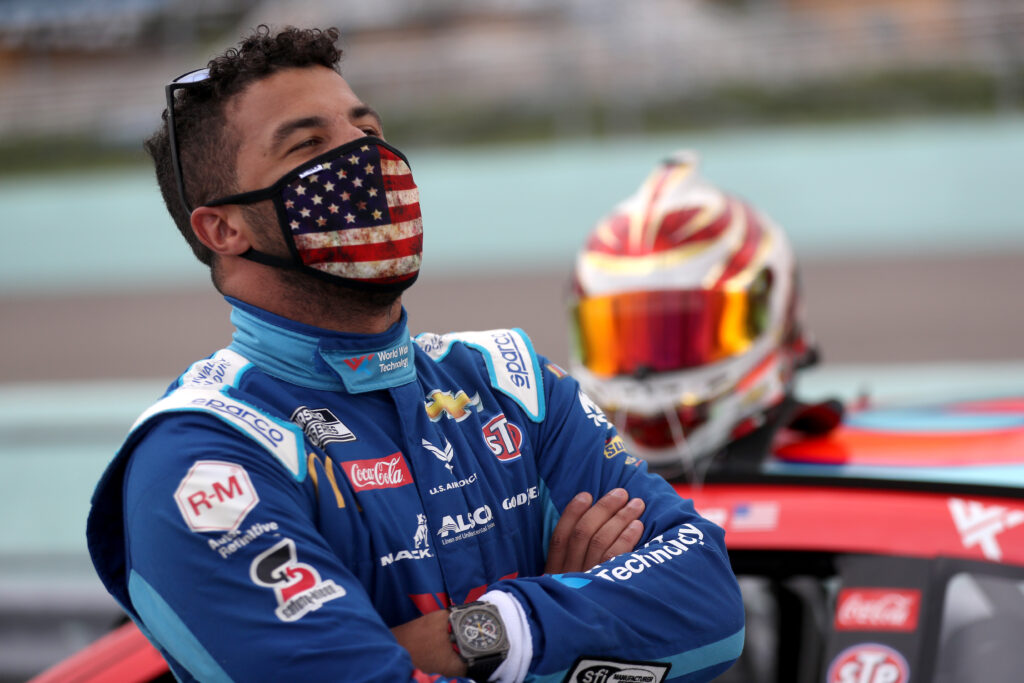 Michael Jordan, an NBA legend and one of the greatest athletes of all time, has agreed to purchase a NASCAR Cup Series Charter and named Bubba Wallace to be the driver for “His Airness” and partner Denny Hamlin when the 2021 NASCAR Cup Series season begins.

Jordan, widely considered to be the greatest basketball player of all time and current owner of the NBA’s Charlotte Hornets, will be the majority owner of a NASCAR Cup Series team. Wallace, the series’ lone Black driver in the midst of a career-best season, has found a home after announcing earlier this month that he would not return to Richard Petty Motorsports.

Also announced Monday was news that Hamlin would also be a minority owner of the single-car team. Hamlin has long been connected to Jordan through the latter’s Jordan Brand, and the two are close friends.

Jordan, a Tarheel himself found himself going to a lot of races growing up in North Carolina.

“Growing up in North Carolina, my parents would take my brothers, sisters and me to races, and I’ve been a NASCAR fan my whole life,” Jordan said in a news release. “The opportunity to own my own racing team in partnership with my friend, Denny Hamlin, and to have Bubba Wallace driving for us, is very exciting for me. Historically, NASCAR has struggled with diversity and there have been few Black owners. The timing seemed perfect as NASCAR is evolving and embracing social change more and more.

“In addition to the recent commitment and donations I have made to combat systemic racism, I see this as a chance to educate a new audience and open more opportunities for Black people in racing.”

Hamlin will remain a driver of the No. 11 Toyota for Joe Gibbs Racing, where his Cup Series career began in 2005. He has six wins this year and is one of the favorites to win the 2020 championship.

Hamlin said he met Jordan at a Charlotte Bobcats (now Hornets) game 11 years ago. Their friendship blossomed as he became the first NASCAR driver with an endorsement by Jordan Brand, and Monday night’s announcement was a next-level extension of their partnership.

Though other details of the new team’s formation had not been announced, Hamlin said “deciding on a driver was easy — it had to be Bubba Wallace.”

Wallace has made 105 career starts at NASCAR’s top level, all of them with RPM. He has five top-10 finishes this year, including a fifth-place run in the regular-season finale at Daytona International Speedway, which is also site of his career-best finish – runner-up in the 2018 Daytona 500.

Wallace announced Sept. 10 that he would leave Richard Petty Motorsports, the team that gave him his start with a four-race audition in 2017 before hiring him full-time the following season. He’ll leave at the end of this season with an enduring memento — the famed curlicued signature of team owner Richard Petty tattooed on his right leg.

The news is the latest development in a season of personal growth for Wallace, who has championed causes that fight racial injustice. Wallace has found his voice in the quest for social change and has welcomed others in the NASCAR industry to join him in solidarity.

“Bubba has shown tremendous improvement since joining the Cup Series and we believe he’s ready to take his career to a higher level,” Hamlin said on social media. “He deserves the opportunity to compete for race wins and our team will make sure he has the resources to do just that. Off the track, Bubba has been a loud voice for change in our sport and our country. MJ and I support him fully in those efforts and stand beside him.”

Said Wallace: “This is a unique, once-in-a-lifetime opportunity that I believe is a great fit for me at this point in my career. Both Michael and Denny are great competitors and are focused on building the best team they possibly can to go out and compete for race wins. I’m grateful and humbled that Michael and Denny believe in me and I’m super pumped to begin this adventure with them.”

Jordan has attended several NASCAR races over the years, most recently the 2019 finale at Homestead-Miami Speedway when Hamlin was in the Championship 4 and competing for his first championship.

“I’m a big race fan,” Jordan told NBC’s Dale Earnhardt Jr., who did the interview. “Started off when I was a kid and I grew up watching (Dale Earnhardt), Richard Petty … Cale Yarborough was an original 11 that I remember. Now I’m good friends with Denny Hamlin and we go way back. … I’m a big NASCAR fan, so I came out to support him.”

NASCAR President Steve Phelps confirmed during a pre-playoffs roundtable with reporters on Sept. 1 that it’s possible for a current driver of a four-car team to own all or part of another team – but that NASCAR would have to ensure fair competition. Additionally, Phelps added the NASCAR Charter system and development of the Next Gen car – which will debut in 2022 – has created a surge of ownership interest.

“On the expense side, I think that what we’ve done, working with our teams and our OEMs to pull costs out of the system. From that perspective, I think it’s improving,” Phelps said. He also suggested that the number of new owners trying to get into this sport “has never been higher” and that he’s seen “a ton of enthusiasm” for future team ownership under the current business model.