Can it really be 50 years since Mario Andretti arrived at Indianapolis Motor Speedway’s Victory Lane to get a smooch from car owner Andy Granatelli, after winning his one and only Indianapolis 500?

Andretti, who has won the Formula One would championship in 1978, the Daytona 500 (1967), the 1969 Pikes Peak International Hill Climb and the 1984 CART championship (along with his three USAC Indy car titles) is being celebrated at the 103rd Indy 500 this May to commemorate his success at The Brickyard.

Mario Andretti’s face will adorn the 103rd Indy 500’s race program, as well as the bronze and silver badges that allow the wearer to enter the garage areas and the pits. These badges have always been collector’s items; this year’s will be even more of one, as will the program.

Andretti, who retired from the Indy car wars in 1994 – but not from competitive driving – will be suiting up in 137 days to drive the series’ two-seater, leading the field of 33 racers before the 11 rows of three come to the start/finish Yard of Bricks to begin the Greatest Spectacle in Racing.

For Andretti, who won the rookie of the year award in 1965 and the Indy car championship the same year, it will be an exciting day and one that he’ll cherish. That single victory in 1969 wasn’t a given, as the racer was supposed to be driving a four-wheel-drive Lotus with a Ford engine but ended up racing a rather tired Brawner Hawk in the 500 his winning year.

After not finishing the 1966-1968 Indy 500s, Andretti was pleased with the Lotus as he practiced during the full month of May in ’69. After qualifying was rained out, Andretti was practicing for the race when, on the Thursday before the second qualifying weekend, the Lotus showed its fragility.

“A wheel snapped right off coming off of Turn 4 and I almost killed myself on that one. So destroyed the car, and then [Lotus owner] Colin Chapman decided to pull all three of the cars out of the race,” Andretti recalled. As Andretti was badly facially burned in the incident, his twin brother Aldo stood in for him at the traditional front-row picture-taking. 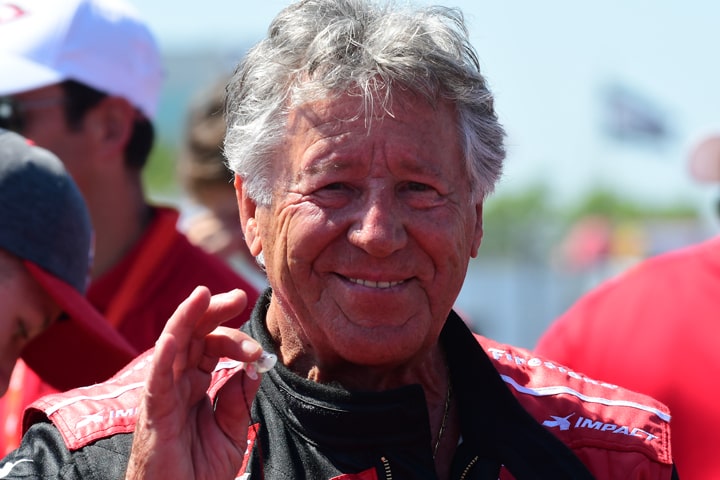 “It was annoying,” he said of the injury. “My breathing was not very good because my nose was wrapped and I just had to breathe with my mouth, which got very dry. I had this big bottle of Gatorade that actually leaked out… but you don’t bother with those things. I think your adrenaline takes over and you just do your job.”

Andretti was relegated to a car he never intended to race, the team’s spare Brawner Hawk, which had won at Hanford, its most recent outing. “Bottom line is, we practiced, we put it on the front row and we were really treading towards adversity on this one… Then in the race I had overheating like you can’t believe it.” Dealing with the excess heat had Andretti thinking he would never see those checkered flags after 200 laps of the 2.5-mile oval.

Even though he led much of the race – “We led more than half of it” – Andretti was anxious about the finish. “Crossing that finish line was just the greatest moment in my life. It was just amazing, just like the 900-pound gorilla was lifted off my shoulders. I figured,” he said, “from here on, it’s going to be easy to put a half a dozen together.”

That never happened, but “the memories are vivid and, just looking back, I just feel just how blessed I’ve been. Now we’ve got skin in the game with the kids having fun with it, and it just gives me every reason to be here every year, and like the first year, we just always look forward to coming here with the same energy and the same desire,” he said.

The allure of Indianapolis is undeniable to Andretti, and the racetrack where it’s held is giving back to the veteran. The Indianapolis Motor Speedway museum will host an exhibit, starting May 1 and continuing through the summer, that will feature the career and Indianapolis 500 victory earned by Mario Andretti, who has led 556 laps and started 29 races at The Brickyard.

The versatile racer, who has won just about every distinguished race but the 24 Hours of Le Mans (he finished second), counts his Indy 500 as the most memorable victory he’s achieved. And he knows just how lucky he’s been: “I think one thing I probably can say that it will be along time before a World Champion in Formula One will have won the Hoosier Hundred! I’m privileged; I feel privileged.” 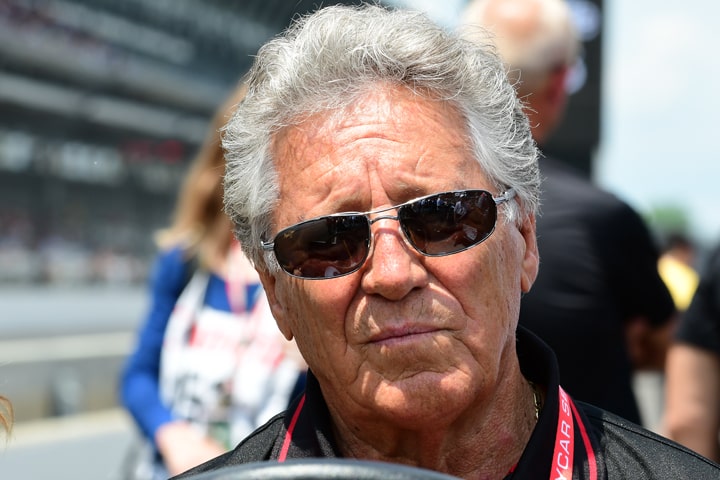