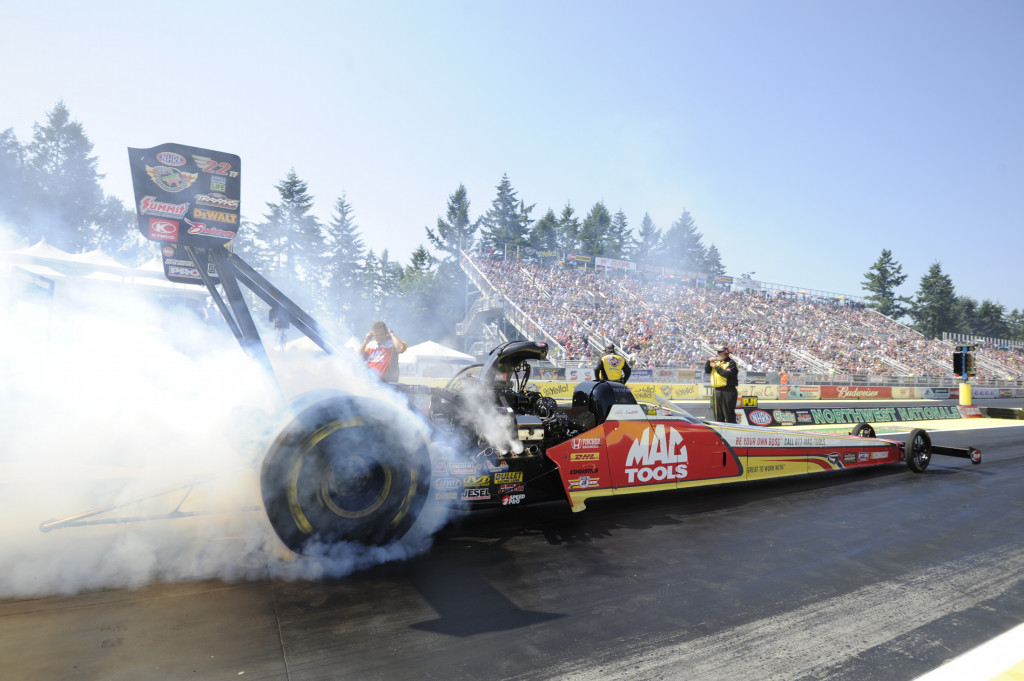 John Force added Funny Car win No.141 to his prestigious career through pure driving excellence, and Jason Line won on a hole shot over his KB Racing Pro Stock teammate, Greg Anderson to round out the event. 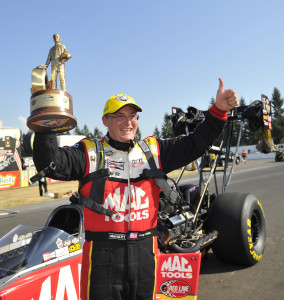 Doug Kalitta extended his Top Fuel points lead to 76 when he turned back his final round opponent and title nemesis, Antron Brown, winning the O’Reilly Auto Parts Nationals at the Pacific Raceways.  He ran a time of 3.844 seconds, 318.84 mph to Brown’s close time of 3.887 seconds, 311.70 mph.  Kalitta’s 35th Top Fuel win — his first at Seattle–places his name alongside ‘Big Daddy’ Don Garlits in victories and is now tied for fifth place in total NHRA Top Fuel wins. Doug Kalitta couldn’t be happier.

“I’ve been keeping an eye on that one for a while,” said Kalitta, who also has six runner-up finishes this season.  “Growing up around the sport, it’s a big deal for me.  Don Garlits is somebody I’ve looked up to and continue to look up to.  That’s something that’s very special to me.  I grew up idolizing Connie (Kalitta team owner, drag racing icon and Doug’s uncle) and Garlits, so to be mentioned in the same breath with both of them is truly an honor.  He’s the man and I’ve been trying to chase down that statistic.

“I’m real proud of (crew chief) JimO (Oberhofer) and my crew.  They’ve given me a consistent car and I just try to do the best I can do.  The competition out here is tough; it’s really something to even make it to a final.  We’ve been banging on the door trying to get another win and we couldn’t get it at a better place than Seattle.”

The 49-year old Ann Arbor, Michigan resident had to march to the win, his first since the Gatornationals in March, defeating Mike Salinas, Troy Buff and the determined reigning NHRA Top Fuel World Champion Shawn Langdon en route to an epic final round match-up against Brown.

”Beating Antron for this one was big for us,” smiled Kalitta. “We’ve just been trying to win rounds but Antron’s been winning a lot, too.  He’s got five wins this year, so I’m glad we were able to get another one here today.  We’ve got some momentum going into the next few races.

“We knew the final was going to be a hard fight, but I’m always extremely confident in my Mac Tools team and they gave me a great race car yet again.  Winning against anybody is tough these days because the competition level in Top Fuel is so high, but getting past Antron is even tougher.”

John Force and his Castrol Mustang Funny Car team celebrated the end of the annual NHRA Western Swing in the winner’s circle as 16-time NHRA Mello Yello champion claimed his 141st career win and eighth at Pacific Raceways on Sunday.

It was also Force’s third win of the season and fourth consecutive final round appearance.  Not only that, JFR Funny Cars can also claim a Western Swing sweep, as Robert Hight’s win at Denver, Courtney Force’s victory in Sonoma and now John’s success at Seattle have rewritten the NHRA record books.

Going into race day, the 65-year old Force’s had qualified in the No. 1 spot with an impressive 4.057 seconds at 307.86 mph.  It was John’s fourth No.1 final qualifying position of the season, sixth at Pacific Raceways and the 150th of his career.  Ten years ago Force won this race from the No. 1 position as well.

John Force faced Jeff Diehl in the opening round of eliminations crossing the finish line first with a 4.102 second run at 307.58.  Force then headed into the quarter-finals where he would face arch-rival Cruz Pedregon.  These two fiercely competitive Funny Car drivers have squared off against each other 93 times in competition with John Force winning 63 of those match-ups.

Force left first in their race and went straight down Pacific Raceways.  Pedregon gave it everything he had, but the times said it all.  John Force ran a 4.161 second pass at 302.48 mph to Pedregon’s losing 4.184 elapsed time at 296.37 mph.

The stage was now set for a semi-final battle between John Force and Alexis DeJoria.  Unlike previous races, it was John’s massive holeshot and great reaction time of 0.075 to DeJoria’s 0.170 that allowed him to get the win despite running a slower 4.301 second pass to her quicker 4.252 second run.

Force did lose lane choice as he went into final round against another seasoned veteran and old teammate Gary Densham.  These two drivers first raced each other 24 years ago in Montreal and over the years, they’ve raced each other a total of seven times in prior final round match ups with John getting four wins reminiscent of the Brute Force vs. ‘The Teacher’s Pet’ match race days.

Once again, John’s Mustang leapt off the starting line first, ahead of Densham and without missing a beat, crossed the finish line first with a 4.173 second run at 302.48 mph to his opponent’s tire smoking 5.808 second run at 120.44 mph.

“I want to win, that is what it is all about,” Force said.  “I raced Densham 40 years ago at this track and we were having so much fun down there in the staging lanes.  I know we’re supposed to be serious, it’s race day.  But when you’re racing a friend (Densham) and he comes up here on a budget; look how good he does, steps it up and races with these guys, and after only being out here few times all year getting in the final is awesome for him.” 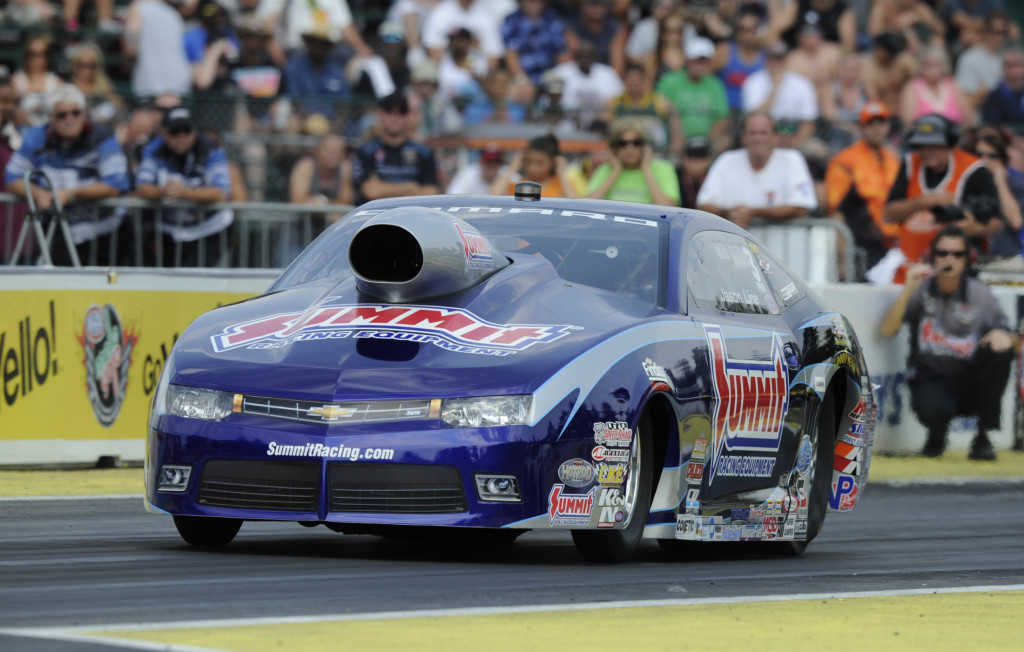 In the 750th NHRA Pro Stock race, Jason Line defeated teammate Greg Anderson in the finals to claim his third career win at Seattle.  Line, in his Summit Chevy Camaro, defeated Anderson on a holeshot with a run of 6.611 seconds at a speed of 210.67 mph to Anderson’s losing effort of 6.608 seconds at 210.54 mph.

Anderson, on the strength of his runner-up finish moved into the Top 10 in the Mello Yello Countdown point standings for the first time this season.  He missed the first five events of 2014 recuperating from open heart surgery.

“It was a very good day for KB Racing,” Line said.  “We got both cars to the finals and Greg got in the top 10.  I was good when I needed to be today.  The car wasn’t great, but it was good enough.  I guess the racing gods owed me one today.  It feels good to get another win.  I’ve never won three races in a row though, so we’ll see what happens at Brainerd.”

It was the first time in three years Line had won back-to-back races and the first all-Summit Racing final round since the 2012 race in Englishtown, where Anderson got the win and the 100th win for KB Racing.  It would be the 70th final round for Line and the 116th for Anderson, and it would also mark the 22nd time that the two had raced in the finals.

“He had the better car all weekend,” said Line.  “The key today was surrounding me with good people.  It’s been a long road back, but we’re back and we’re not going to let those Dodges beat us.  Team Summit won today.”

Starting from the No. 3 position, Line drove to round wins over Mark Wolfe, V. Gaines and Shane Gray in a tight semi-finals race.

The win was the 34th of Line’s Pro Stock career and his third of the season.  It was particularly sweet as it came on the heels of a victory earned just last week in Sonoma.

KB Racing teammate, Greg Anderson had the look on his face of dismay and frustration after hearing the results in the shutdown area.

“It was a good points day, but I did not get what I came here for and I take full responsibility,” Anderson sighed, so close to a win.  “I should have won that race.  Obviously, I didn’t do a good enough job driving.  I got to find a way to win.  If I can’t win before I get to that Countdown, I’m not so sure I need to be there.  I had a great opportunity this weekend and a great race car and I didn’t get it done.  Apparently, it looks like I’ve got to learn to win again and it’s been two years since my last win.  The good news is I’ve got a great Summit Racing Chevy and a great chance going forward and two more opportunities to get it done.  I can’t screw up again.”

Line is No. 3 in the Pro Stock standings and just 37 points outside of first place to Erica Enders-Stevens, who will be returning to competition in Brainerd.  Only five points separate Line and second place Allen Johnson.  Jonathan Gray is now the odd man out in eleventh and is 26 points behind Anderson.