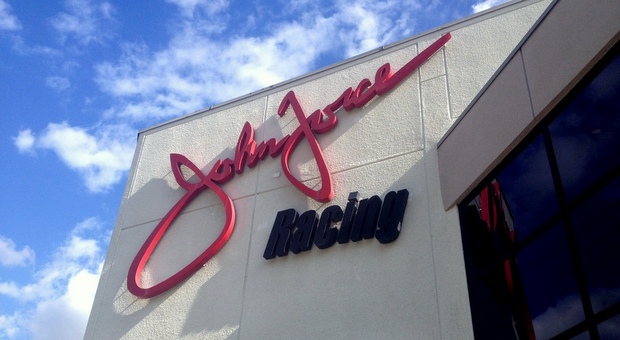 From now until December 23, 2013, the John Force Racing Museum will open its doors to the public, showcasing some of the most exciting Funny Cars and Dragsters in NHRA history along with priceless racing memorabilia.

For free admission to the museum, fans simply need to drop off a new, unwrapped $10 toy which will be collected for the CHiPs for Kids Holiday Toy Drive. The JFR museum is located at 22722 Old Canal Road in Yorba Linda, California and will be open from 9 am to 4 pm daily.

Yorba Linda is about an hour away from Racing Junk’s west coast office, so I purchased a couple of toys and made my way to the home of the “winningest Funny Car team in the world.”

My first thought upon entering the museum was, “Wow, that’s a lot of trophies!” A ring of Wally trophies surrounded John Force’s 2013 championship winning Ford Mustang and Courtney Force’s 2012 Rookie of the Year car. The 2013 Mello Yello Funny Car World Championship trophy stood proudly in the center of the display.

The JFR museum isn’t just about race cars and trophies; it also gives fans a rare glimpse into John’s personal life. The walls are decorated with old racing memories and family photos, and feature his extensive Elvis Presley and vintage Americana collection.

I continued my tour past the in-house movie theater into the race shop where various Funny Car bodies and vintage dragsters were on display. The cars span Force’s 30 year career and include the original Brute Force Monza, the Leo’s Stereo ’78 Corvette Funny Car and the Wendy’s Funny Car.

The John Force Racing Museum is a must-see destination for any drag racing fan, and especially for fans of the always charismatic, 16-time Funny Car champion. It’s the perfect way to inject a little nitro fuel into your holidays and support the CHiPs for Kids charity.