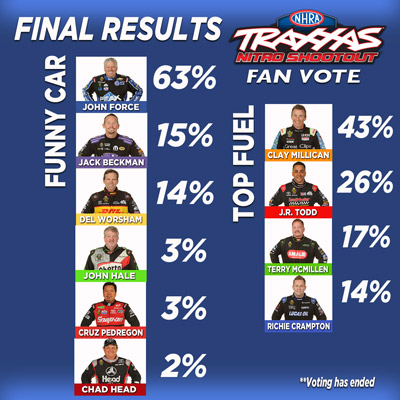 Legendary Funny Car racer John Force and 2015 Top Fuel lottery drawing winner Clay Millican won the fan vote of Traxxas Nitro Shootout, concluded on Aug. 30. Force’s fan base granted him 63 percent of the votes and Millican received 43 percent, earning  an advantage to win the final starting positions in their respective categories in the Traxxas Nitro Shootout, which will be decided by a lottery drawing. Force and Millican will wait alongside their competitors to see which ball emerges during the lottery drawings, held at noon on Wednesday, Aug. 31, during the Chevrolet Performance U.S. Nationals press conference at Monument Circle in Indianapolis.

In Funny Car, Jack Beckman trailed Force with 15 percent of the votes and was followed by defending world champion Del Worsham with 14. John Hale received 3 percent of the votes, as did Cruz Pedregon, and Chad Head tallied 2 percent. The Top Fuel fan-votes panned out with J.R. Todd earning the second most votes with 26 percent. Terry McMillen notched 17 percent and Australian native Richie Crampton has 14. 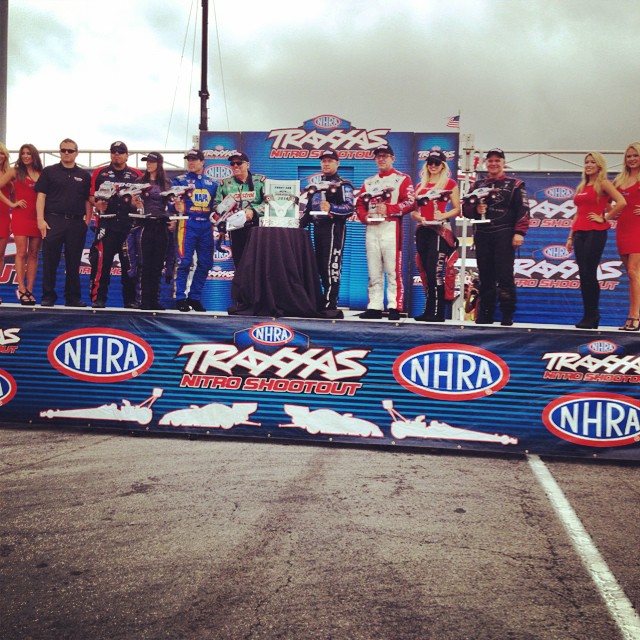 Each racer will get to add as many lottery balls in the machine as their fan vote percentage indicates. One drawing will be held for the four Top Fuel drivers and another for the six Funny Car racers.   The Funny Car lottery winner will earn a first round matchup with top seed Ron Capps in the Traxxas Nitro Shootout for Funny Car on Sept. 4. The winning Top Fuel driver will be paired with top seed Antron Brown in the first round of the Shootout for Top Fuel on Sept. 3. Brown and Beckman are defending Traxxas Nitro Shootout winners in their categories.