Seven-time NASCAR champion Jimmie Johnson didn’t have much to do on Monday, so he took a trip to Circuit of the Americas (COTA) outside Austin, Texas, to check out the first NTT IndyCar Series open test of the year. After qualifying fourth on Sunday for the upcoming Daytona 500, Johnson paid visits to friends in the paddock and, just like the drivers, hung around hoping the rain squalls would go away.

They didn’t, but Johnson, who is stopping his full-time NASCAR Cup Series competition after the 2020 season, still had a good time. This is not the end of his racing, he’s said, but what comes next could be anything, from road-racing in INDYCAR, a trip back to his personal memory lane of off-road racing or even races in either the World Endurance Championship (WEC) or IMSA.

“I’m open to all other forms of racing. Now that there is an ending near at the end of 2020, those calls and texts and stuff,” from teams in other forms of racing, “are coming in more often,” Johnson allows. He’s driven in circles long enough, he said, and has an interest in driving an Indy car on road courses. The new aeroscreen adopted for the 2020 season has helped sway the seven-time NASCAR champion’s thoughts to the open-wheel arena.

“INDYCAR is an option. Sports cars. I could see a situation where the WEC series has an eight-race schedule – there’s a lot of off-weeks an in an eight-week schedule. Travel the world, take my family with, school, experience the world…” he mused. “I could see a neat opportunity there.

“Clearly, the IMSA (WeatherTech Sports Car Championship) series racing here in North America would be a lot of fun. Those divisions would be probably my first focus in ’21 or ’22.” Johnson has raced in IMSA’s Rolex 24 at Daytona on several occasions, with a best finish of second in 2005 and 2008. 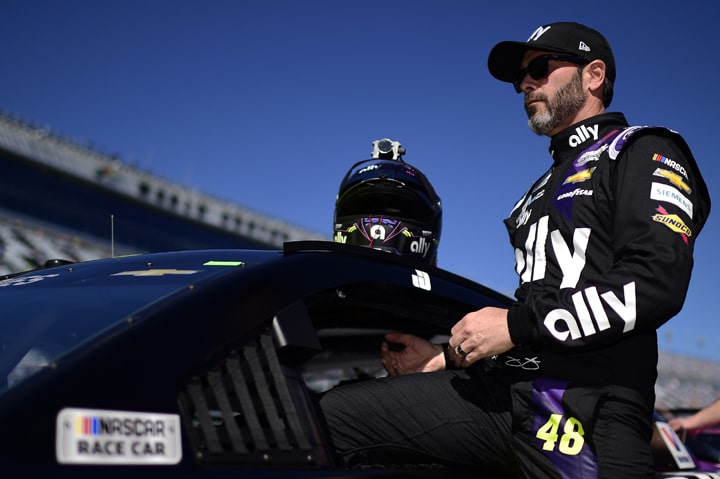 “In my heart,” Johnson confirmed, “I still want to go back and do some off-road racing. I think opportunities like that will be around for a long time. I feel like there’s probably a shorter runway on some of these other series… With that being said, I’m just open. We’ll see what develops over the year.”

A couple of years ago, Johnson traded cars with Fernando Alonso, who was still driving for McLaren’s Formula One team at the time. “After driving that F1 car a couple of Novembers ago, it just blew my mind what that experience was like. So yeah, INDYCAR is an option,” once his work with Hendrick Motorsports is complete next November.

As he watched the rain come down at COTA, Johnson considered the track one that he might consider for his INDYCAR attempts. He’d actually consider most any road course, “Especially an F1 track. I was able to go around the one in Abu Dhabi with Fernando in a McLaren production car, which was really rad.”

On Tuesday, at COTA, he was able to take a ride – in the rain – around the 3.426-mile, 20-turn track with Max Papis, who works as a race steward in INDYCAR. “Max wouldn’t let me drive it,” as they traversed the COTA track in a rental car. “He was too busy being Max and showing me around. I didn’t drive anything there, but rode shotgun and felt like I was going to get sick!”

Unfortunately, Johnson missed all the action on Wednesday as he had work to do in Daytona Beach, where Sunday’s Daytona 500 is being held. He missed seeing Will Power set the fastest lap of the day, at 1:46.760 in the Verizon Chevrolet for Team Penske. 2016 Indianapolis 500 winner Alexander Rossi was second in his NAPA Honda prepped by Andretti Autosport. Australian SuperCar two-time champion for INDYCAR owner Roger Penske, Scott McLaughlin, finished third in his second INDYCAR test, followed by reigning Team Penske champ Josef Newgarden and defending COTA INDYCAR winner Colton Hereto, driving for Andretti Harding Steinbrenner Autosport. There were a total of 27 drivers taking laps at the test. 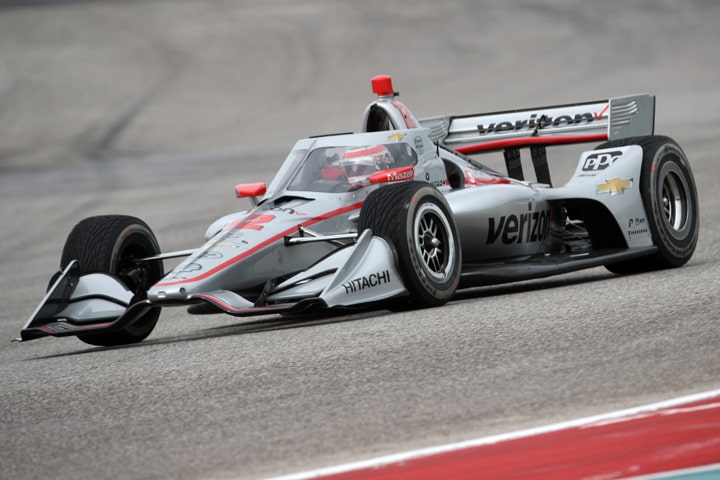