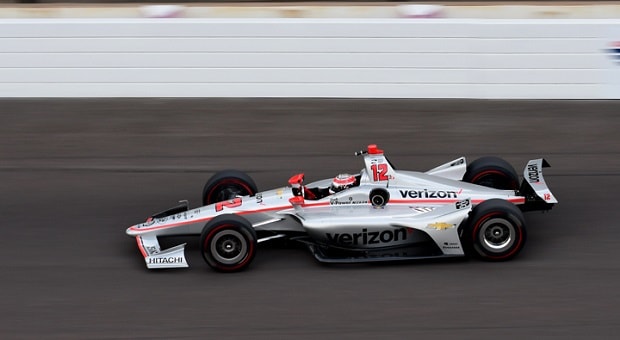 The 102nd Indianapolis 500 Mile Race is in the books and, after 10 tries to win this Greatest Spectacle in Racing, Will Power finally drove his No. 12 Verizon Team Penske Chevrolet to Victory Lane; his best result until now was finishing second behind teammate Juan Pablo Montoya in 2015.

This was a very different Indy 500 from recent years. There was a flash, hard-driving rain with bursts of wind on Saturday night, rendering the surface that all 33 qualifiers had used for practice on Carb Day a very green, gripless track. Couple that with temperatures well into the 90s, sticky humidity with only an occasional breeze.

The Dallara DW12 race car has changed since the last bodywork update in 2015, when engine makers Chevrolet and Honda were designing their own competing aero kits as well as power mills. Now there is a universal aero kit dubbed UAK18 and it has less drag than did the previous iterations. Add heat, a green track and a car that doesn’t like to work in a pack and it’s a new game.

Power led 59 laps of this 200-mile enduro around the historic 2.5-mile oval. The 37-year-old Australian, INDYCAR’s 2014 champion, abhorred oval racing when he first came to the series in 2008, but has grown to relish them, having earned seven oval victories, four of them now of 500-mile duration, at Fontana, Pocono twice, and now here. It was his 34th INDYCAR career victory and the record-extending 17th for Team Penske. 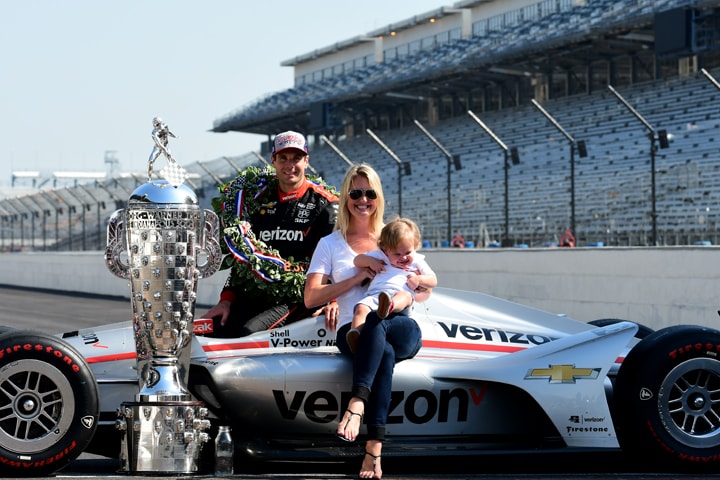 After ticking that missing box on his resume, Power’s emotions got the better of him. “I just screamed like I’ve never screamed before. It was just amazing. The last two laps, the last lap, seeing the white flag, the checkered, I mean, you can’t explain it. It’s what I needed so badly, what I wanted so badly and it came true.”

Power allowed that this race meeting has pretty well gone to plan, with the same issues everyone had coming to grip with how the new car was going to race. For him, it was all coming right on this oval. In fact, he says, “Since 2013 I just got better and better at ovals. I just absolutely love them now. I know exactly what I want, exactly how the car should feel, know how to drive them, know when to take risks. That just took time, like everyone.”

Like most everyone else, Power was wondering how the track conditions and the changed weather situation would affect the ebb and flow of the race, as well as the difficulty of racing tight with the UAK18. Would this be a follow-the-leader type of event or would there be wholesale passing as in years prior?

It would have been appropriate to be a bit apprehensive at the green flags, but pole man Ed Carpenter kept his Fuzzy’s Chevy at the front for the first 30 laps before pit sequencing took over. Carpenter would lead 65 laps, most of any of the 15 different drivers who held top spot, but not the most important one. “I’ll feel pretty good about this in a couple of days, I think,” he said afterwards.

Carpenter thought this year’s 500 was a “totally different type of race. This new kit has performed so well all year. Like every iteration of cars, the longer we have them, the better they’ll get.” While he could work his way through lapped traffic, “It was really hard to pass anybody if they had clean air in front of them. I could kind of pick my way through some of them.”

Scott Dixon, who started ninth, came third and used his innate ability to keep the speed he needs and still get excellent fuel mileage in his PNC Bank Honda from Chip Ganassi Racing. For his setup, the Pit Stop Challenge winner felt the weather “actually helped the car. I felt like stint 4 or 5 [during the race], the track gripped up quite a bit. As the cloud cover came over, it definitely helped everybody’s car.” 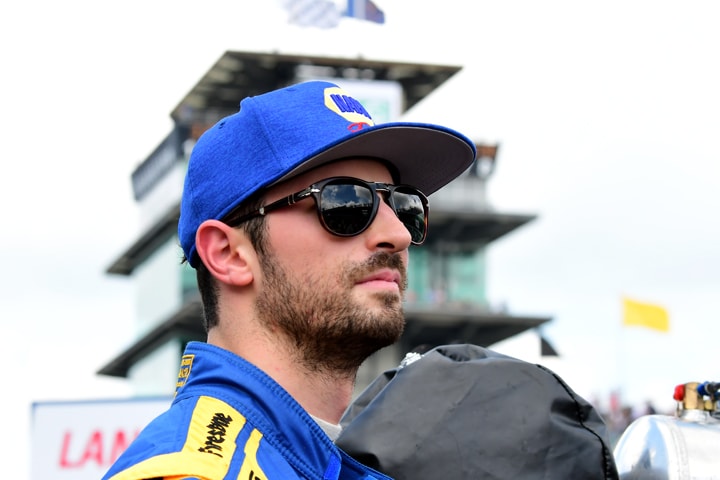 The green track did take prisoners, particularly in the second and fourth turns. While the first yellow came for a collision between a rapidly slowing James Davison of A.J. Foyt Racing and last year’s winner, Takuma Sato, driving for Rahal Letterman Lanigan Racing in the third turn on lap 48, first Chip Ganassi Racing’s Ed Jones (lap 58), Ed Carpenter Racing’s Danica Patrick (lap 68) and Tony Kanaan on the 189th lap would connect with the second turn wall,  all without an assist.

All seven cautions were caused by contact. Dale Coyne Racing with Vasser Sullivan Honda driver Sebastien Bourdais, the fifth qualifier, had been running strongly but connected with the fourth turn wall on the 139th lap after a long, 63-lap period of green-flag running. He would be okay. On the 146th lap, three-time Team Penske Indy race winner Helio Castroneves had a massive spin off the last turn, ending up at the entry to pit road. Sage Karam’s Dreyer & Reinbold Chevy smacked the final turn’s SAFER barrier on lap 154.

There were some spectacular drives on Sunday; the most impressive belonged to 2016 Indy 500 winner Alexander Rossi in the No. 27 NAPA Honda. After a deflating tire took Rossi from original 10th qualifier to starting from the last row, the Californian charged through the field, finishing fourth and leading a lap. Thirty-second to fourth was a thrill ride; Rossi’s outside passes were O-inspiring.

Among the drivers to lead laps were Oriol Servia in the Scuderia Corsa Honda; he led 16 laps, mostly toward the close of the 200-lap contest. Rookies Zachary Claman De Melo (Dale Coyne Racing Honda) led seven tours around the 2.5-mile oval while Robert Wickens led two in his Lucas Oil Honda. Wickens would be the highest finishing rookie in ninth place. Carlos Munoz took the lead for four laps and teammate Stefan Wilson, brother of the late Justin Wilson, held the lead for three. 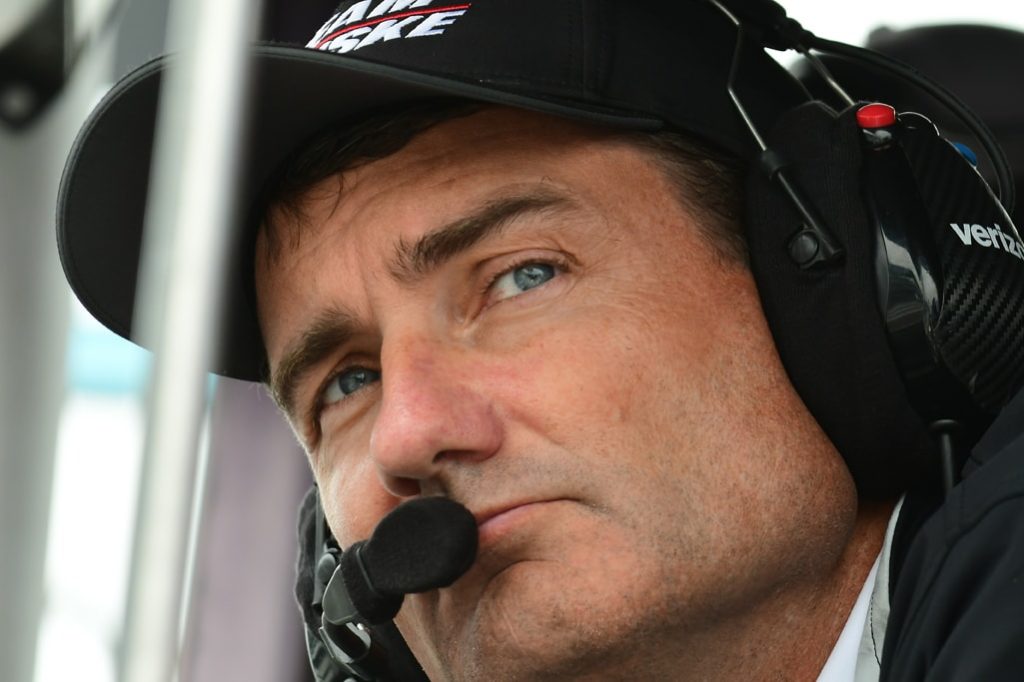 The heat of this day kept paramedics busy around the track this sweltering afternoon. It seemed the only cool person in this massive speedway was Power, a man comfortable in his skin on a track that required exceptional skill. Team owner Roger Penske said of his driver, “He won this race today because he was the best; there’s no question about the speed at the end, his out laps, the pit crew I take my hat off to, Jon [Bouslog, Power’s strategist] and Tim Cindric because we had four great cars.”

Team president Cindric gave much credit to Power’s engineer, David Faustino, who has been with the driver since he was hired. “Dave Faustino has been at his side from day one. He’s been the one that’s listened to all the ups and downs. He’s been on-call 24/7. The crew were prepared. Will was agonizing during dinner as far as what his setup was, what his gears were going to be. His mind never leaves this sport; he’s fully committed.” 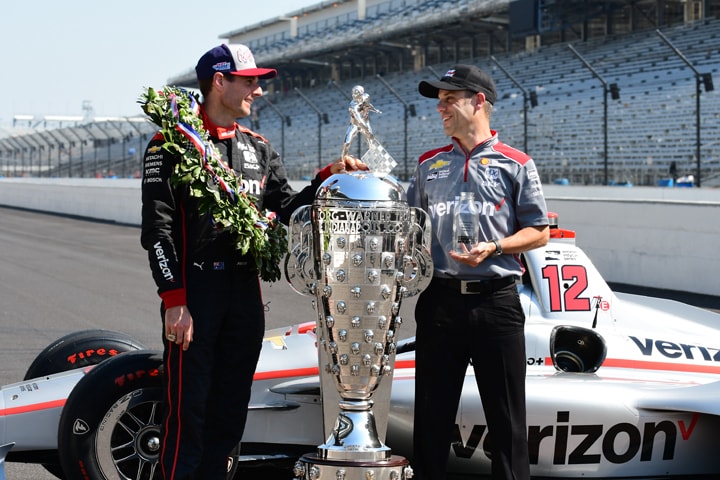 Will Power has now left his mark on American motorsport, the first Australian to win the biggest race in the world – on the same day countryman Daniel Ricciardo owned the Monaco Grand Prix. What’s next? On Monday after his traditional photo shoot, someone asked if Power had spoken with Penske about NASCAR. “We’ve got some pretty good drivers in there. He needs me in INDYCAR. I actually need him, I need that team.” Always a threat on road courses, now Will Power is a threat anywhere he races. Including the Indianapolis 500.