RacingJunk News > News > Guest Columns > Hot-Rodding 101 – Back to Front, or Front to Back Build?

In my younger days, I thought bigger was better. I wanted to make my small block Chevy 400 scream, so I threw on some giant aluminum heads, a fat cam, and 750cfm Edelbrock carb. The problem? I had factory gears, the factory 1900 stall, and 400sb rods with a stroke that was nowhere near long enough to take advantage of the added air and fuel. The advice I received from the old hot-rodding pros was simple. Always start from the rear when you are building a vehicle from stock. Building the motor can be the most expensive and tedious aspect of a project, and in the meantime there are plenty of ways to take advantage of the power your that your engine already produces. 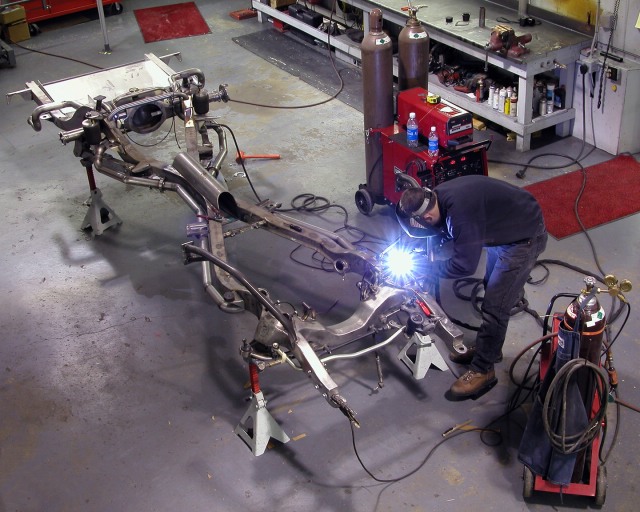 The problem with modifying your motor first is that the rest of your drivetrain was originally built to utilize the factory power at the factory intended rpms with the factory stall, factory transmission, and factory gears. When stock components undergo intense stress from performance modifications, they can, and will break. It is a much better use of time and money to rebuild your transmission and rear end first to handle the increase in power you hope to gain. Proactive building is always better than reactive building. Build it so it won’t blow up, instead of blowing it up and then rebuilding it.

If you are doing a traditional hotrod build on an old iron block carbureted motor, there is nothing wrong with slapping on some headers and a four barrel to try and make her rumble. It’s important to consider that there is only so much you can do before these aftermarket parts actually start hindering your torque and horsepower curve. Some stock parts are not intended to be matched with factory gears or the factory level stall speed. These add-ons are designed to be used with specific supporting modifications.

These modifications can be applied to any project, but let’s pretend you are building an old school iron street rod, and all of the stock components are in good operating condition. Now because we’re talking about a traditional hotrod build, we’re going to assume you’re bowing down to the torque gods and looking to get off the line as quickly as possible. Stock small block motors (with the exception of short stroked motors like the 400sbc) will make most of their power in the higher rpms. Big block and larger displacement motors will be able to take advantage of lower end grunt torque.

Before you dig into the top end of the motor, you should first find out what kind of rear gear ratio you are running. If you are lucky, your car was built with some mild performance in mind, and you’ll be sitting pretty with some 3.73’s or 4.10’s.  If not, then you probably have a rear end somewhere in the 2.70’s range. Here is a list of operating RPM’s that coincide with gear ratio and tire height. This calculator on summit.com is a good way to determine your power band, and how it interacts with your set-up.

The lower your gear ratio, the faster your rpms will climb. In this manner the car will reach its optimal rpm range for maximizing the motors power much quicker. It will make the car quicker but not necessarily faster. Here is why. When the vehicle reaches its peak operation rpm quicker, you either run out of gears or reach the “valve float point.” This is when a car passes the highest operating rpm at which it can make power, and your pistons begin to come in contact with your valves. Increasing this ceiling is the ultimate goal, and should be addressed lastly as it is the “front” of your build, and directly concerns increasing the engine’s performance.

Depending on your motor and where it makes its power, it is a good idea to utilize a higher stall with some taller gears. For a small block stock Chevy motor in close to stock configuration, it’s hard to go wrong with a 2000-2500 stall and some 3.73’s behind a TH-400 or TH-350 Trans. If you have a 4-speed, 4.11’s may work better for a faster start off the line while maintaining drivability. A shift kit can also be added to firm up and raise shift points.

Next you want to figure out if you have a limited slip, full locking, or an open differential rear end. Do a burnout to see if your tire(s) leave 1 or 2 marks behind you. If you’re peg legging with only one, you’ve got an open differential. This means the car transfers all of its power to the wheel under the least amount of load. Regardless of how much power you have, it’s useless only spinning through the wheels. There should also be a tab bolted to one of your pumpkin bolts that tells you whether or not your rear end has limited slip.
Once you have achieved a solid limited slip, or locking rear end in with shorter gears and a torque converter with a slightly higher stall, you will be able to notice significant gain in your 0-60mph times, as well as a quicker start off of the line. The best part is that none of these modifications threaten the reliability or drivability of your engine.

From here you can start to ad things like a larger camshaft. Depending on where you are looking to increase power, the cam will list the most effective gear ratio and stall for the lobe diameter’s lift and the duration. This is when you reach the actual “front” of your build. There are many different ways to go from this point, and they really just boil down to personal preference. Regardless, now you can enjoy your rod fully without worrying about reliability, or fretting over the fact that your car doesn’t behave the way you want it to because you have miss-mated modifications that don’t live up to their full potential.