Although Hailie Deegan’s first season in the NASCAR K&N Pro Series has contained several historic achievements, she hit the biggest one of them all Saturday night.

She led only one lap in the NAPA Auto Parts/Idaho 208 at Meridian Speedway, but it was the most important one; 17-year-old Deegan used a pass on the white-flag lap to take the victory, becoming the first female driver to win in the history of the NASCAR K&N Pro Series.

Deegan, of Temecula, Calif., had previously taken second in a NASCAR K&N Pro Series West race on two occasions, most recently at The Dirt Track at Las Vegas Motor Speedway two weeks ago. That put her in a tie for the series’ record for highest finish by a woman in either the K&N Pro Series East or West. But on Saturday night, she took a step up from that already-prestigious place.

“Oh my god,” Deegan said in Victory Lane. “This has to be the best day of my life, right here. It doesn’t get any better than this. People don’t understand how many days, how many hours I’ve put into this, how much work I’ve done to get to this moment. It’s just amazing; this is the happiest day of my life. We did it. WOOHOO!” 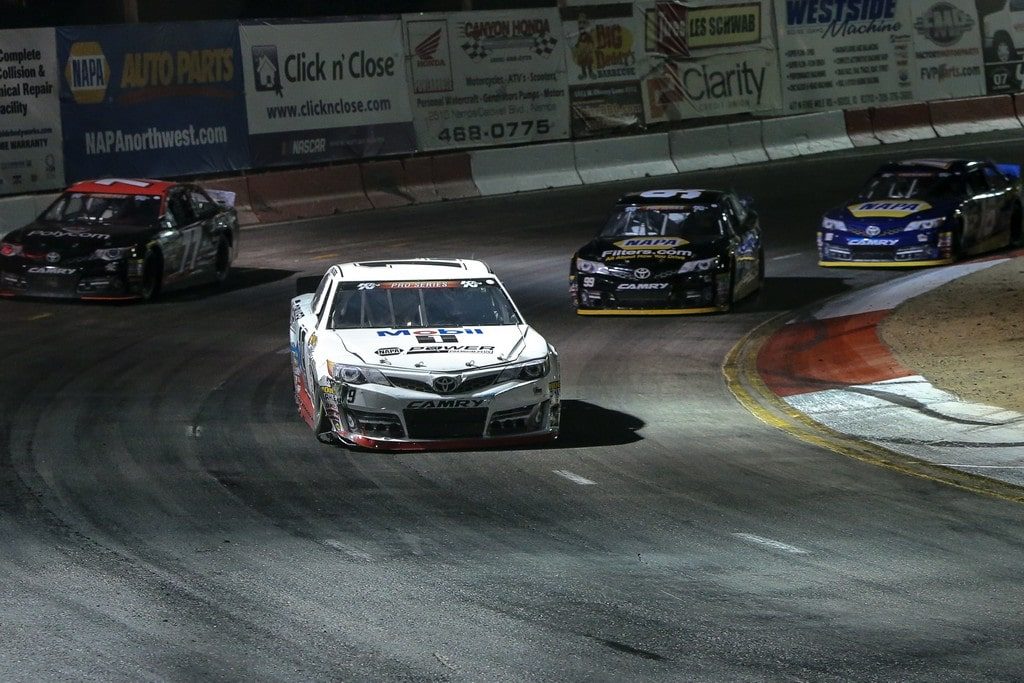 At Vegas, this NASCAR Next driver became the first woman to win the pole in a NASCAR K&N Pro Series race. She currently has five top fives and 10 top 10s in 12 starts, and has taken over the lead in the Sunoco Rookie of the Year standings.

Her winning pass was on her Bill McAnally Racing teammate Cole Rouse while entering Turn 1. Deegan said she considered the move carefully before performing it.

“I was in bed last night, thinking, ‘If it comes down, last lap, I’m in second, I’m a car length off of him, what am I going to do?’,” Deegan said. “And I found that Turn 1 spot. I knew what exactly I had to do there. I was doing it to some other people, just getting right under them to get them a little light, to get them – not wrecking loose, nothing crazy, but enough to just get a little under them and make the pass happen. We did that. I knew exactly what I had to do the last lap. I did it, we executed and we made it happen.”

Of course, Deegan’s win meant Rouse had to settle for second place, the third time in the last four races he’s been the runner-up.

“We were going into Turn 1, and she doesn’t lift and drives into me – gets me completely sideways,” Rouse said, looking at the pummeled left rear quarter panel of his No. 99 NAPA Filters Toyota. “We were going to win that race if it was run clean, but unfortunately it wasn’t. I’m just going to go into the next two races, not give her any slack and we’re going to win both of those. It was a good night, but I don’t really care about second, honestly.” 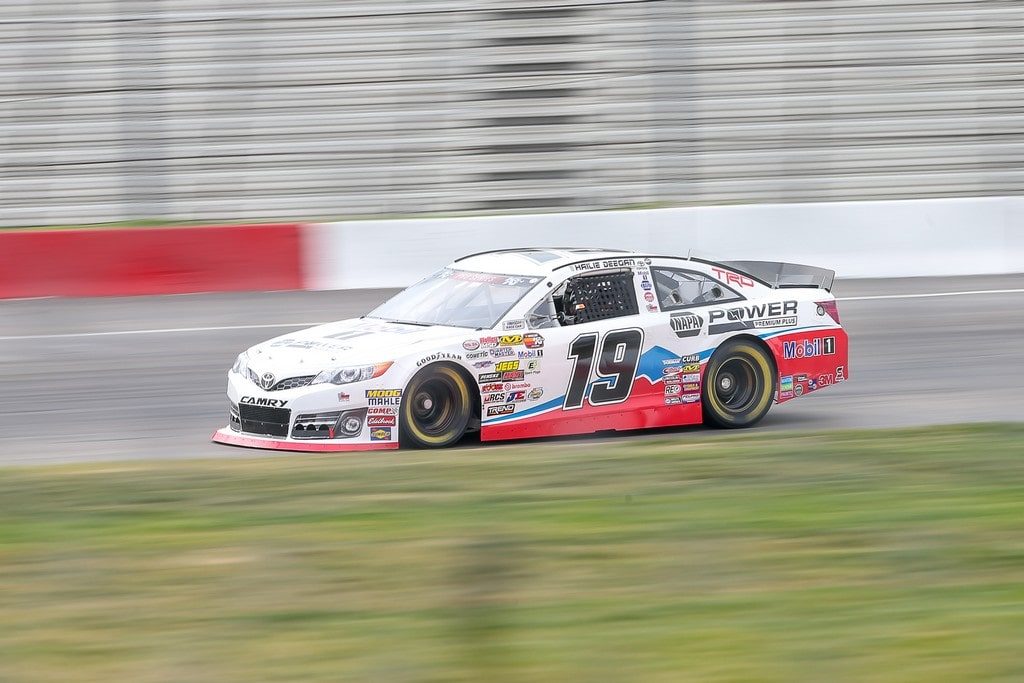 Pole sitter Derek Kraus rode home in third with his No. 16 NAPA Auto Parts Toyota, making this race a podium sweep for Bill McAnally’s stable out of Roseville, Calif. Unfortunately for Kraus, who had lead over 190 laps without relinquishing the top spot, third was a disappointment and part of a long string of bad luck for the Stratford, Wisconsin native.

“We led 190+ laps, then a lapped car spun again,” Kraus said. “I was predicting he was going to roll down because he didn’t have his brakes on yet. But he stayed there, and I was already committed (to the top), and I guess NASCAR ruled me third. I don’t know; I guess we’ll go onto Roseville and Kern and win those two.”

The NASCAR K&N Pro Series West will take a week off before visiting All American Speedway in Roseville, Calif., for the Toyota/NAPA AutoCare 150 presented by TriCo Welding Supplies on Saturday, Oct. 13. The NAPA Auto Parts/Idaho 208 is scheduled to air Friday, Oct. 5 at 1 p.m. ET on NBCSN. 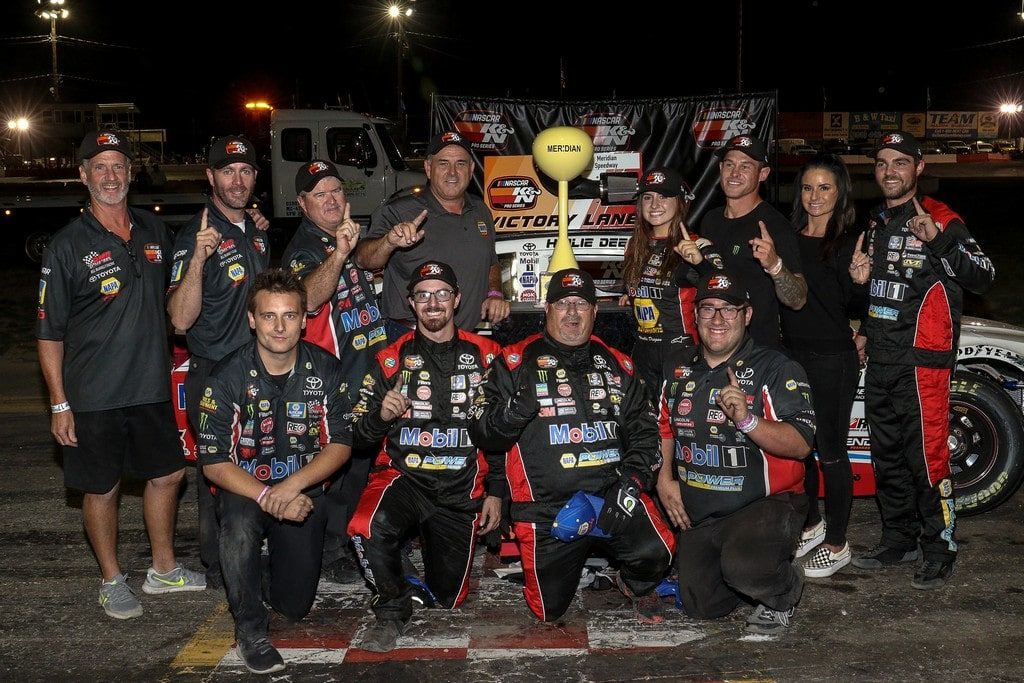