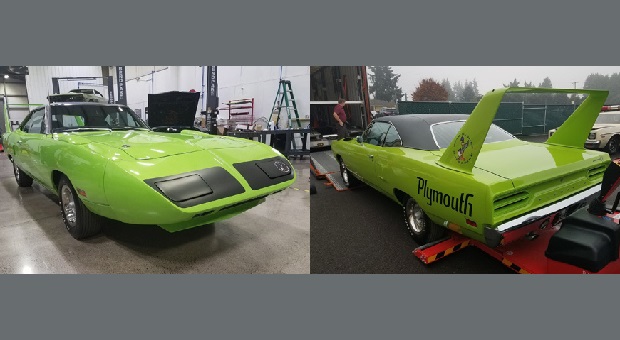 The newest, meanest Mopar offering not only makes 707 horsepower, it’s a widely-available crate motor intended for pre-1976 machinery to promote the idea of blending the best of old and new. This supercharged 6.2-liter V8, named the Hellcrate, is identical to the motor found in the Hellcat Challenger, the Hellcat Charger and the Grand Cherokee Trackhawk, and as part of promoting the engine, Graveyard Carz went ahead and stuck the engine in a classic 1970 Plymouth Superbird.

Before the purists lash out at the idea of a custom shop chopping up a classic Superbird: This machine is a replica. In fact, it’s a Roadrunner converted into a Superbird replica, and it has traveled the automotive show circuit. Last year, this showcar Superbird sported a six-barrel 440 – which, impressively, weighs more than the Hellcrate – in an attempt to look period-correct. For this year’s SEMA, they first sprayed the body with a coat of FJ5 limelight green.

However, the spacious engine bay allows for a blower and all the ancillaries, so why not inject a little modern muscle? Though the new motor didn’t quite fit as expected, they got around the fitment issue by lowering the engine to allow for some room for the supercharger. That way, they could keep the stock hood for a factory appearance.

Thanks to the Graveyard Carz program, which airs on the Velocity Channel, Mark Worman of Graveyard Carz helped sell some 400 Mopar crate motors at last year’s SEMA, and returned this year with their Superbird sporting the blown V8, the accompanying mounting gear, a Tremec Magnum six-speed transmission and a slew of restoration parts including a complete interior, dash assembly, exterior trim, wheels and wiring harnesses from Classic Industries.

They replaced the steering system with a rack and pinion from Magnum Force, and replaced the torsion bars with coilovers. Not only do these goodies offer better steering and handling, they’re also virtually stock in appearance. Same with the exterior interior – the latter’s only difference from a factory car is the location of the pistol-grip shifter: more centered than standard on account of the Tremec gearbox. 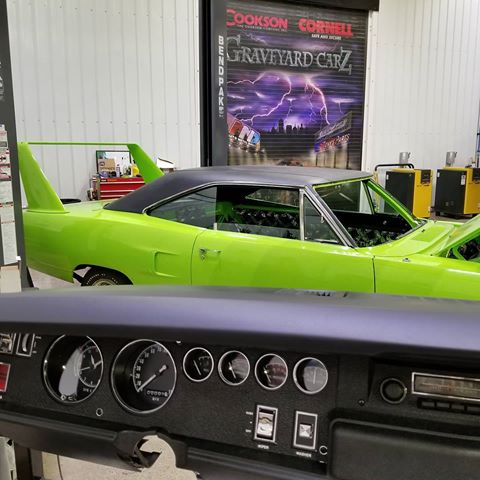 The plug-and-play operation comes thanks to a powertrain computer, a power distribution center, engine and chassis wiring harnesses, ground jumper, oxygen sensors, charge air temperature sensors and a fuel pump control module. Additionally, Mopar provides the user with an accelerator pedal, since the Hellcrate motor is drive-by-wire. Some purists might have to wrestle with that idea, but the power and throttle response ought to help even the most rigid traditionalists see the light.

Additionally, Worman employed Mopar’s Front End Accessory Drive (FEAD) Kit, which includes an alternator, power steering pump, belts, pulleys and a few other choice items to make the swap simple and straightforward. To help take a modern engine and implement it into a classic car, Mopar has done everything in their power to streamline the installation process.

With 650 lb-ft of torque powering the classic Mopar machine, a three-year warranty and plug-and-play operation, there’s plenty to motivate a legion of hot rodders to pony up the dough and stick a modern V8 motor into their aged muscle car. Do you think it’s sacrilegious to stick a modern motor in a classic like this, or something new and refreshing?