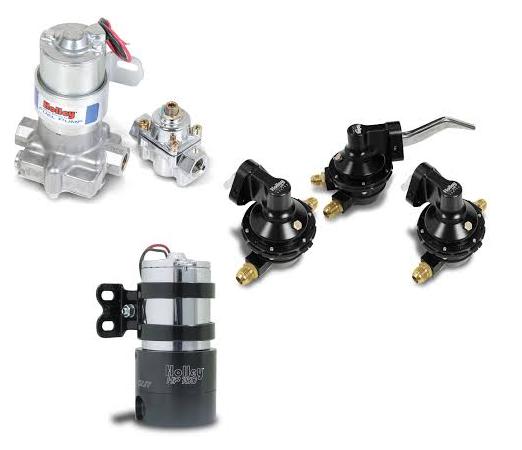 High-performance engines have the ability to deliver unheard of horsepower numbers as compared to what was considered high performance just 10 – 15 years ago. Engines today are able to make use of better-flowing cylinder heads, ignition systems that can melt metal, and camshaft profiles once reserved for purpose-built race cars. But making a lot of power is useless if you don’t properly feed the engine. We’re going to take a look at different fuel system components.

With that being said, let’s take a look into selecting proper fuel system components (i.e., pumps, filters, fuel lines, and other items), needed for a carbureted system—based on horsepower. Whether you are a drag racer or road racer, supplying the needed fuel to your engine with the right pressure, and volume, is crucial to achieving the ultimate performance.

When it comes to choosing a fuel pump, you need to determine how much power your engine is actually making. If you haven’t dyno-ed your engine, you can make a reasonable guess, and luckily since everyone usually guesses with high hopes, you will usually be safe.

In order to build a fuel system compatible with your engine’s needs, you should know how much fuel your engine needs to deliver peak power. Brake Specific Fuel Consumption (BSFC), is the measure of an engine’s fuel efficiency as measured on a dyno. BSFC is the rate of fuel consumption divided by the actual power produced.

If you do not have actual dyno information, you will need to determine how much horsepower the engine will produce, and the amount of fuel required to support it. This can be done by estimating horsepower on both the high and low side of BSFC. Since most engines use less than one pound of fuel to make one horsepower for one hour, you can expect the BSFC number to be less than one.

If you don’t have access to a dyno, and you have to estimate your engine’s BSFC; the following guidelines can help you get close.

An efficient, naturally aspirated engine usually has a BSFC between .45 and .55 lbs/hp/hr.

If adding nitrous, they typically use more fuel, and often carry a BSFC from .5 to .6 lbs/hp/hr.

Forced induction engines are not as efficient, and BSFC ranges from .6 to .75 lbs/hp/hr.

A gallon of fuel weighs roughly 6.2 pounds. So, our first example uses 225 pounds of fuel, and when we divide that by 6.2, our engine needs 40 gph (gallons per hour). Our second example uses 375 pounds per hour and divided by 6.2 tells us that our engine would need 60 gph. As you can see, this equation can be used for any engine horsepower.

So, once you figure out how much fuel your engine needs, how do you know what kind of fuel delivery system can get your engine what it needs? We’re here to help with that question. Let’s say that a typical performance engine on the street develops around 450 horsepower. Is a 100 gph fuel pump required? If it’s overkill, is that a bad thing? An engine in this horsepower area can conceivably run by just upgrading to a performance-oriented mechanical fuel pump with a sufficient fuel system. In this case, a sufficient fuel system consists of a slightly larger-than-stock fuel line, and a couple of high flow fuel filters (one before, and one after the pump). When you start producing more than around 450 horsepower, you really need to focus on using high-quality performance parts.

So let’s say you have an engine making between 450 and 600 Horsepower. This is an area where an electric fuel pump becomes a necessity. One thing to keep in mind is that most electric fuel pumps are rated for flow while working at zero pressure. This means that the advertised flow rating of a fuel pump can be misleading. Why? Because a fuel system operates under pressure. The pressure added has an effect how much flow your pump actually delivers. When choosing a fuel pump, look for flow ratings that occur at the pressure you need. Most carburetors run best when the pressure at the needle and seat is roughly 6–8 pounds—unless supercharged. When a fuel system’s pressure rises, the pump’s volume actually decreases. Even if your pump can deliver the fuel required, having a fuel line that is too small makes having the proper fuel pump a mute point, as there will not be sufficient fuel volume.

Most electric fuel pumps will also require the use of a pressure regulator. Not many high-performance fuel pumps are designed to deliver no more than eight pounds of pressure, and that is why a regulator is required. A large restriction in a fuel system is a “dead-head” regulator. These regulators are popular because of their simplicity since no return line is used. Not only are they restrictive, but they create other problems that can be eliminated with a return-style regulator. While a “dead-head” regulator regulates pressure by starting and stopping the fuel flow, return-style regulators regulate pressure by sending excess fuel back to the tank or fuel cell.

Now that we’re trying to supply adequate fuel to an engine making up to 600 horsepower, the rest of the fuel system will need to be upgraded. In order to supply the proper volume of fuel, the lines will need to have—at a minimum, 1/2-inch inner diameter. The larger line will carry a larger volume of fuel, which is required. Once again, fuel filters are required before and after the fuel pump, and not just any filter will do. If you buy a 99-cent fuel filter at a car show and expect it to be sufficient for your engine, you are sorely mistaken. Those plastic filters are barely adequate for a stock engine. Why build a good fuel system and then choke it down with a restrictive fuel filter? The filter before the pump needs to allow enough flow to keep up with the demands of the pump, and not cause a fuel pump-inlet restriction. A restriction at the inlet can create a vacuum in the line, which will lower the actual output pressure of the pump. Not all fuel filters are created equal. Most—if not all filters, measure their filtering capability in Microns. A Micron is the size measurement of the porosity of the filter’s media (the higher the Micron number, the larger the flow capability). While these larger holes do allow more flow, they also allow larger pieces of debris to pass through. Conversely, the lower the Micron number, the smaller the flow holes. This equals better filtration but creates a flow restriction.

But, what can you do if you have a behemoth of an engine that produces more than 600 horsepower? Most principals that apply to a 600 horsepower engine will also apply to those making more than 600, and up to around 800 horsepower. However, there are a few upgrades that should be considered. When installing the fuel lines, a minimum of ½-inch feed lines from the tank are considered the norm. Also make sure to use fittings that do not restrict flow. Remember that the fuel to your engine has to be delivered past the fuel pressure regulator and the needles and seats. Let’s not forget to mention that the fuel pump and system has to sufficiently deliver that fuel under hard acceleration. In other words, the g-forces of the launch are forcing the fuel to the rear of the car while the pump tries to overcome that force. Although a good mechanical fuel pump can feed your engine for up to 400 horsepower, have an electric fuel pump can be added insurance. Most carbureted systems up to this horsepower range do not use a return line. 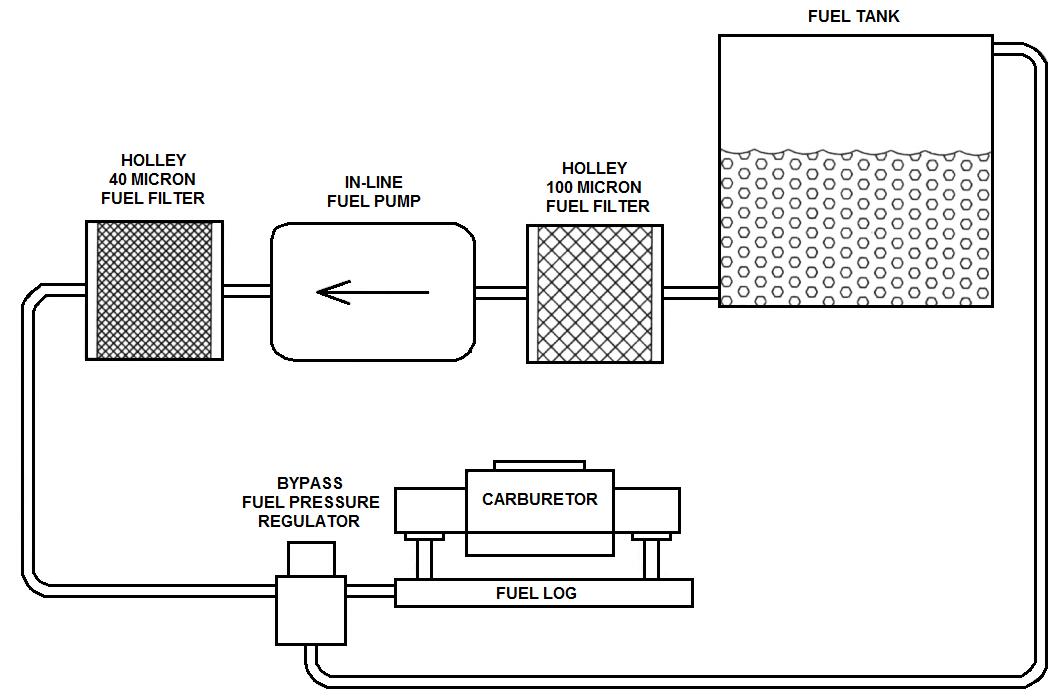 Once you get above 450 horsepower, you might want to think about a return-style fuel system. Return-style regulators regulate pressure by sending excess fuel back to the tank or fuel cell. 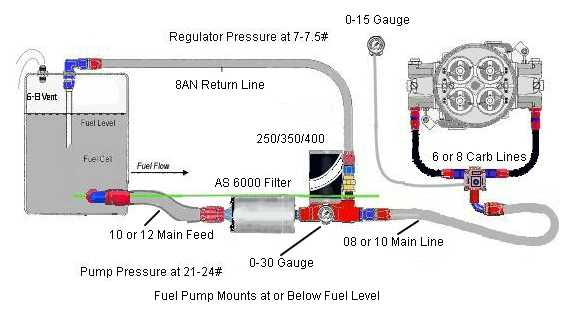 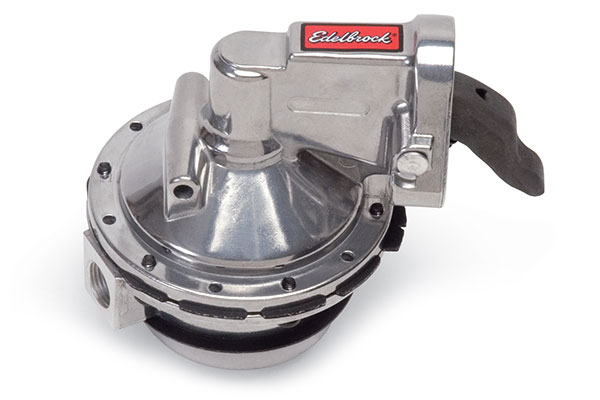 Edelbrock’s Performer-series mechanical fuel pumps feature a polished finish, and the unique valve design improves flow quantity and quality. Edelbrock even says that it will support engines up to 600 horsepower. It produces 6 psi and does not require a regulator. 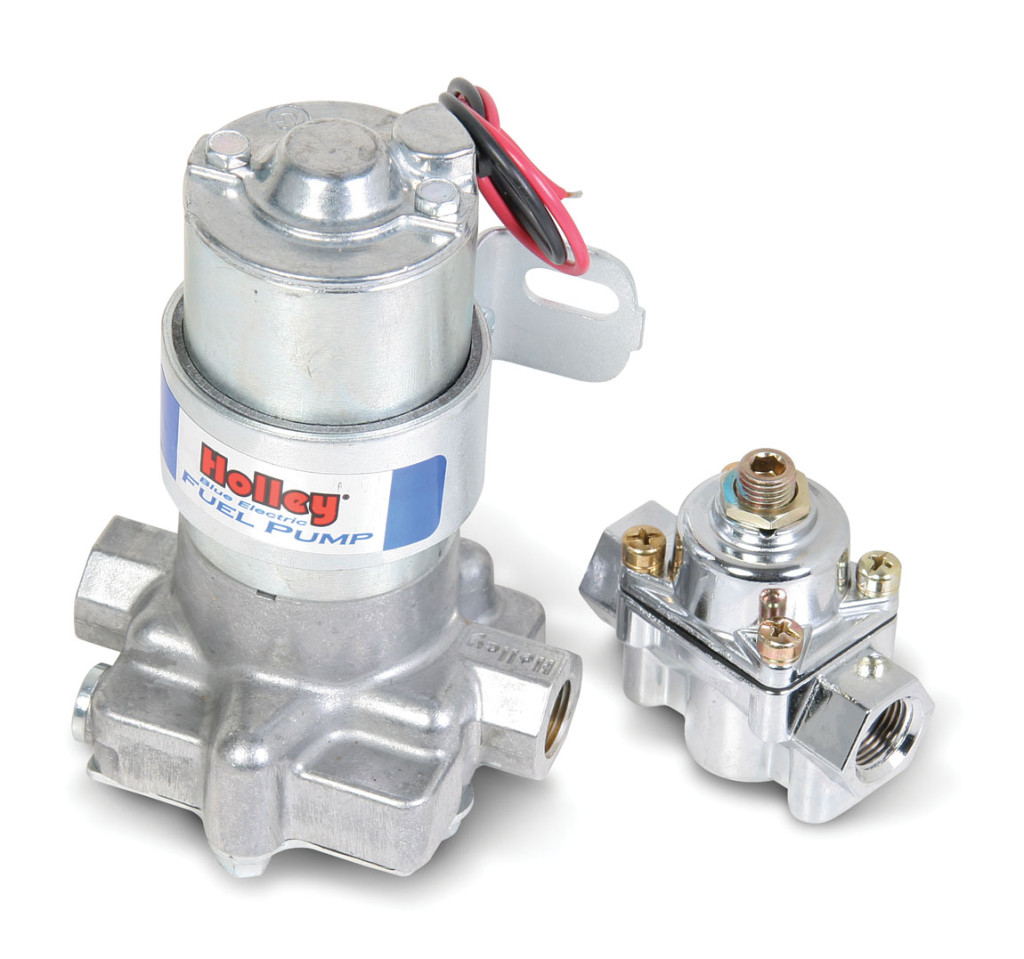 Holley’s line of Blue, Red, and Black electric fuel pumps have been powering race and street enthusiast cars since the early 1970’s. They are an affordable electric pump, and come with the regulator (dead head). 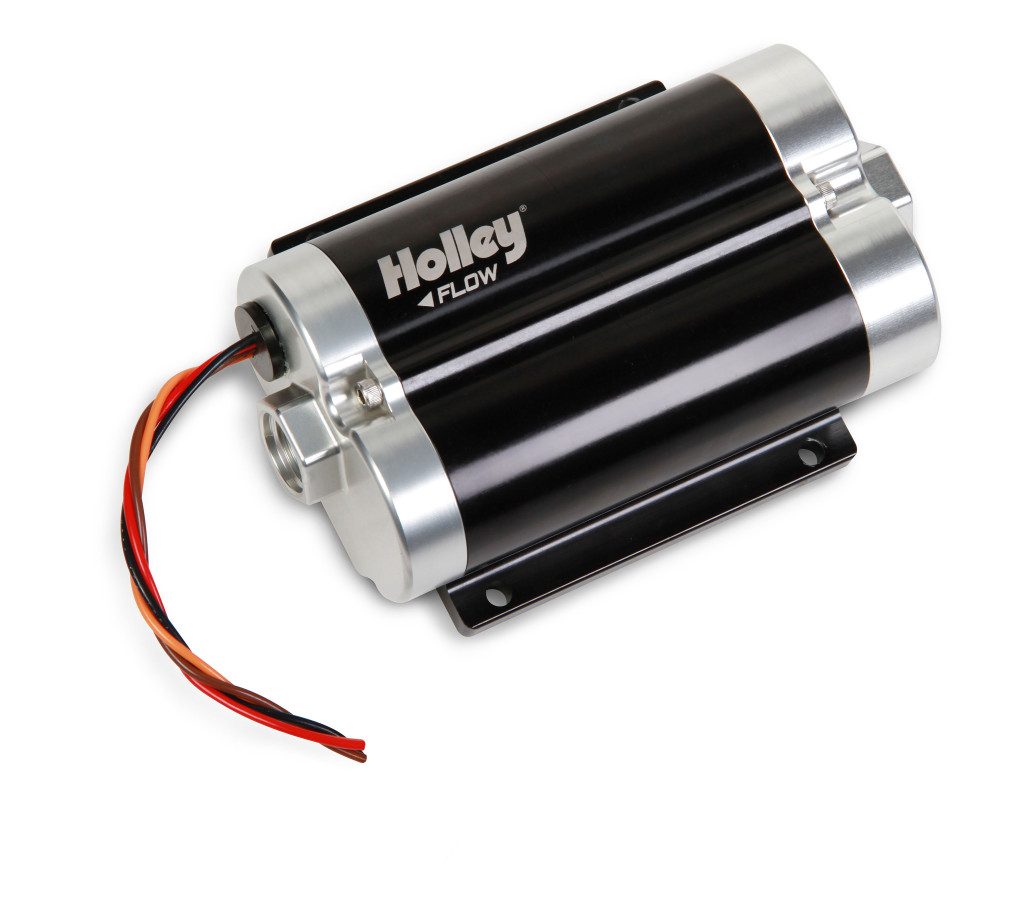 Holley’s Dominator in-line fuel pumps feature a twin pump-design which allows you to use one pump for cruising and then both pumps when you activate the nitrous switch or start building boost. For hard core race vehicles, both pumps can be wired for full time duty to get maximum performance and are proven with 18.5 volt compatibility at pressures up to 80 psi. 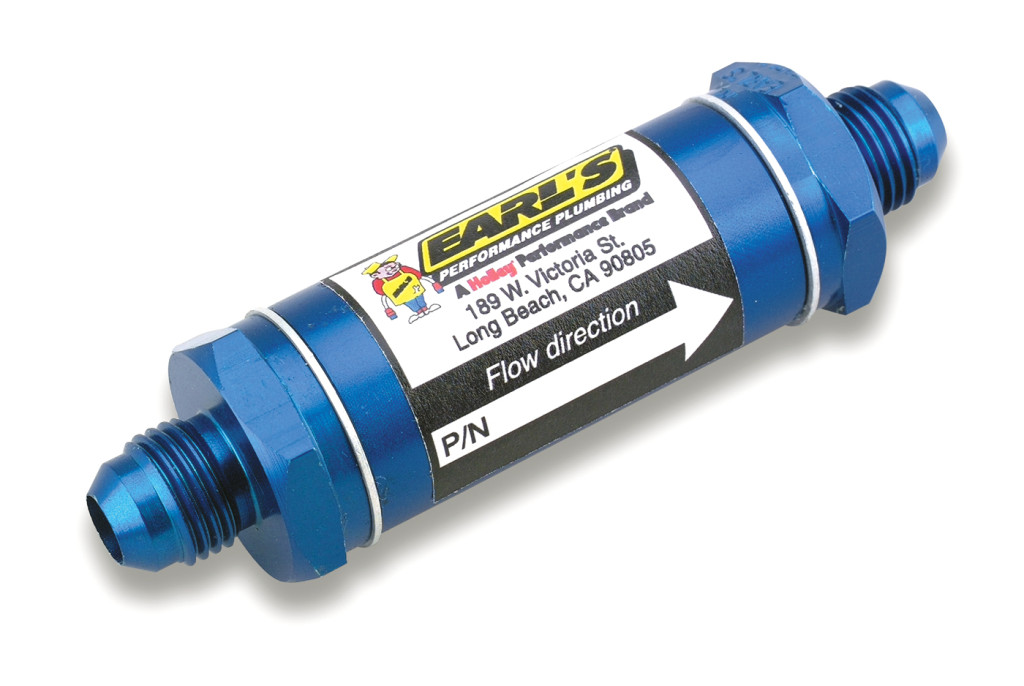 Having a fuel filter—or two, is a must in a good fuel system. This inline filter from Earl’s is available in either a screen filter or a sintered bronze element. Either unit can be easily disassembled for inspection and cleaning. The filter housings are available with size -6 AN, -8 AN, or hose barb ends (bronze element only). They have a fuel flow of four gpm, and come in a nice anodized finish.

Earl’s (a division of Holley) and Holley