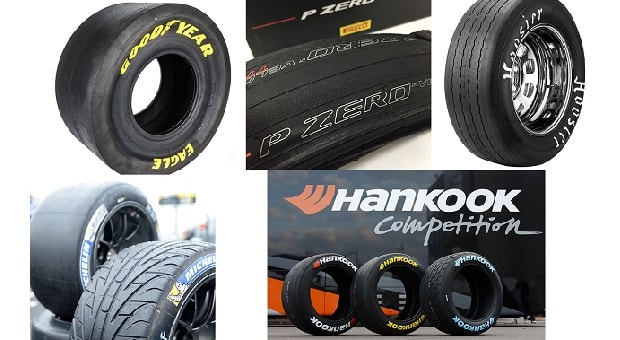 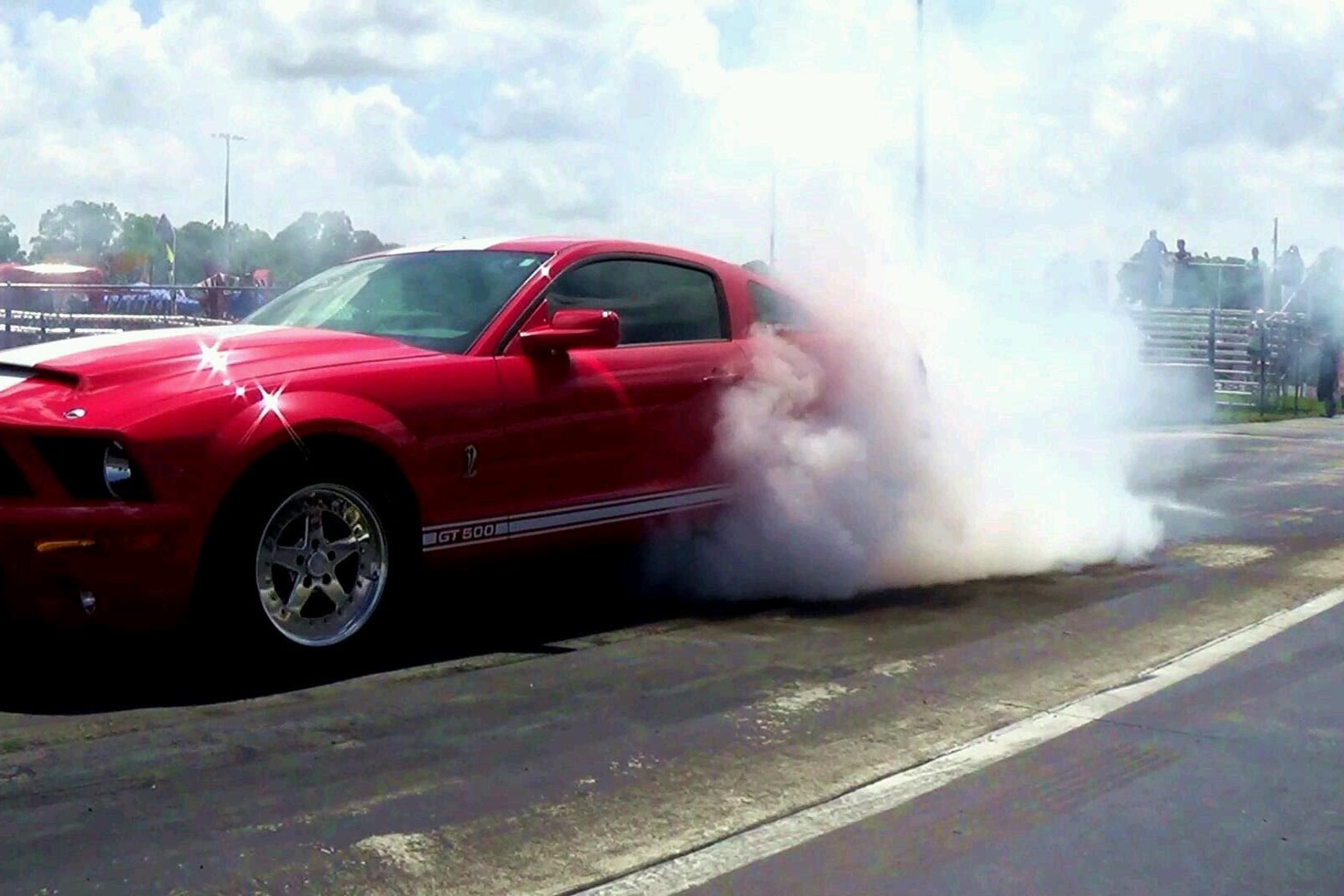 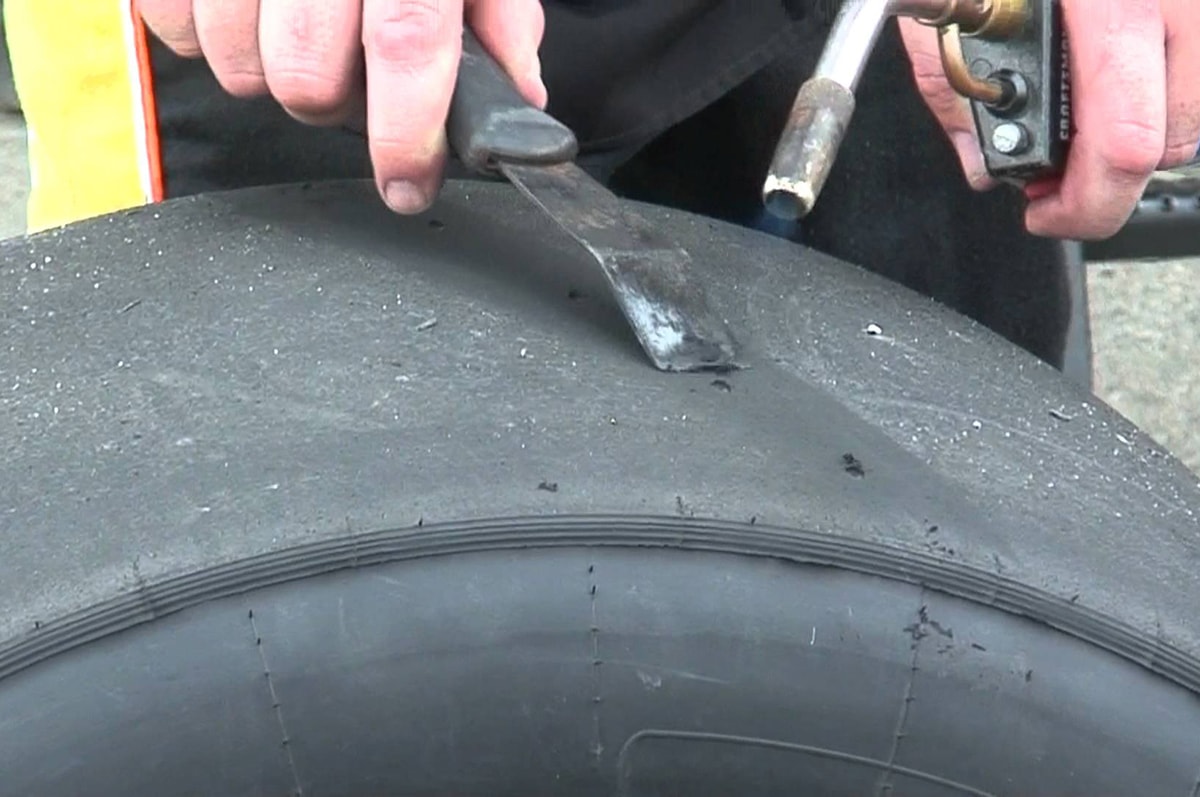 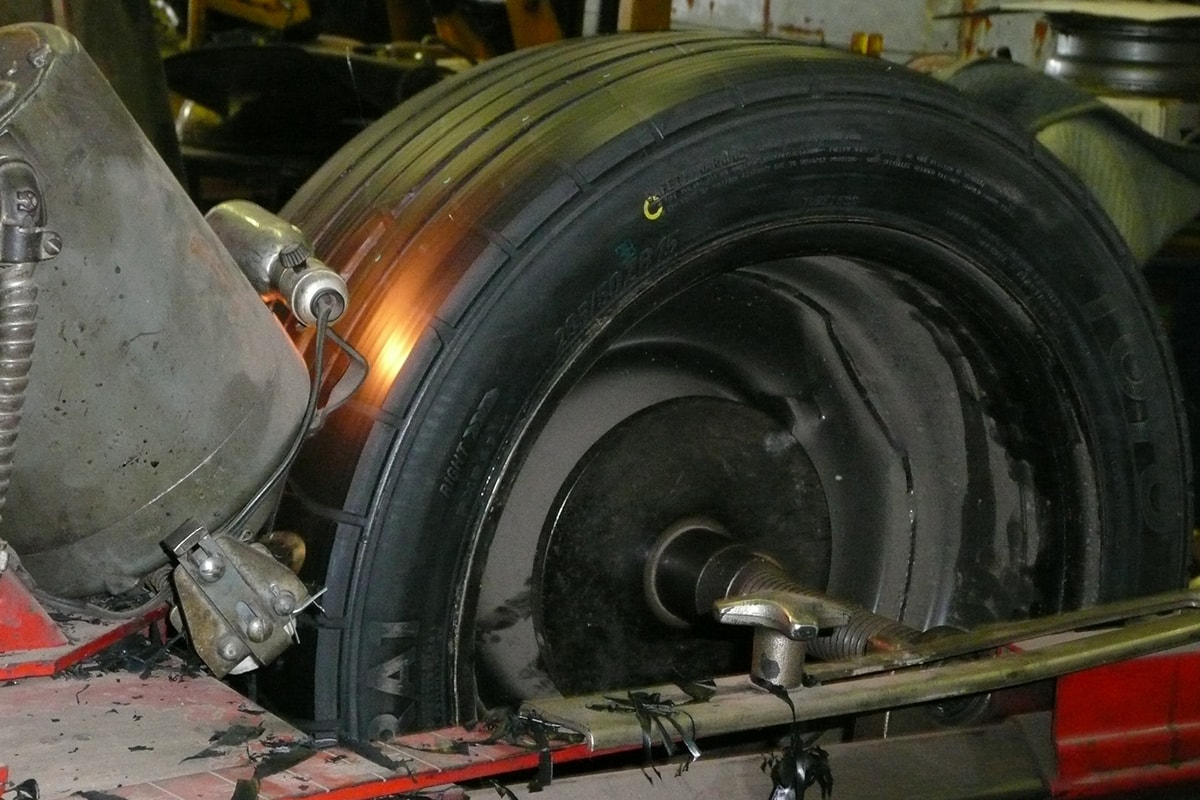 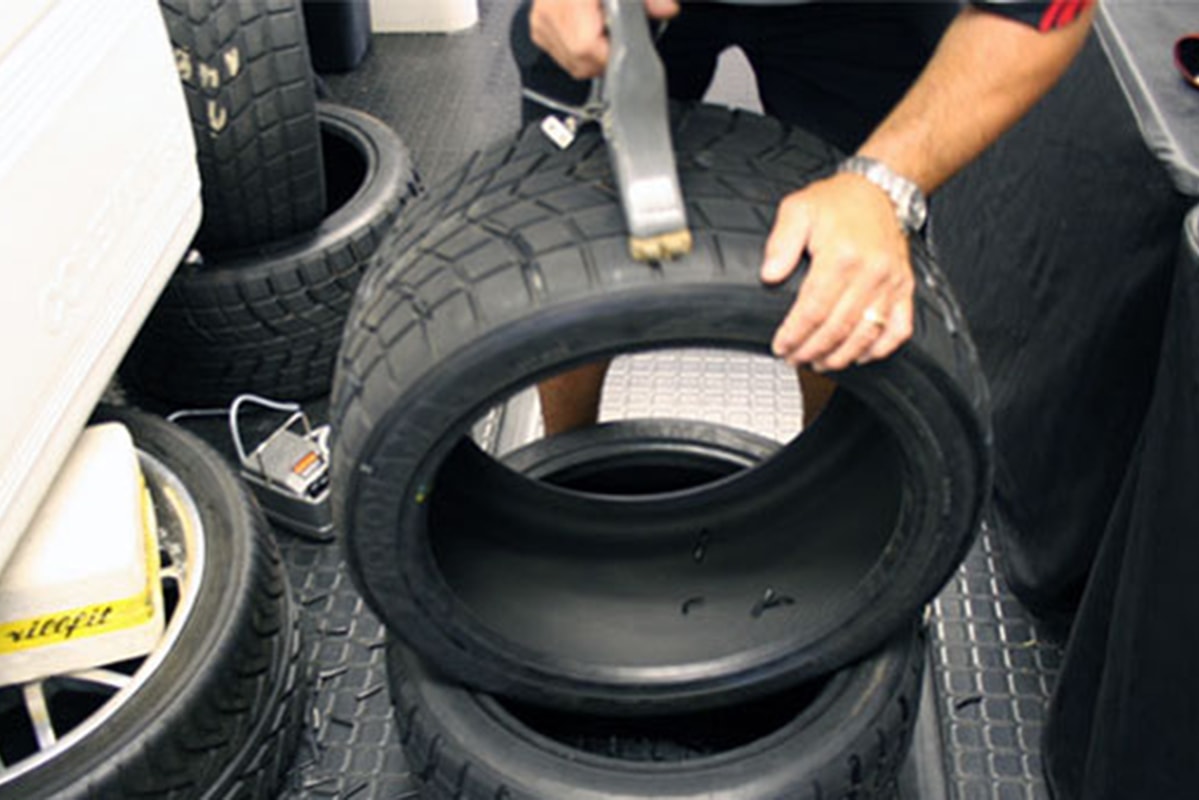 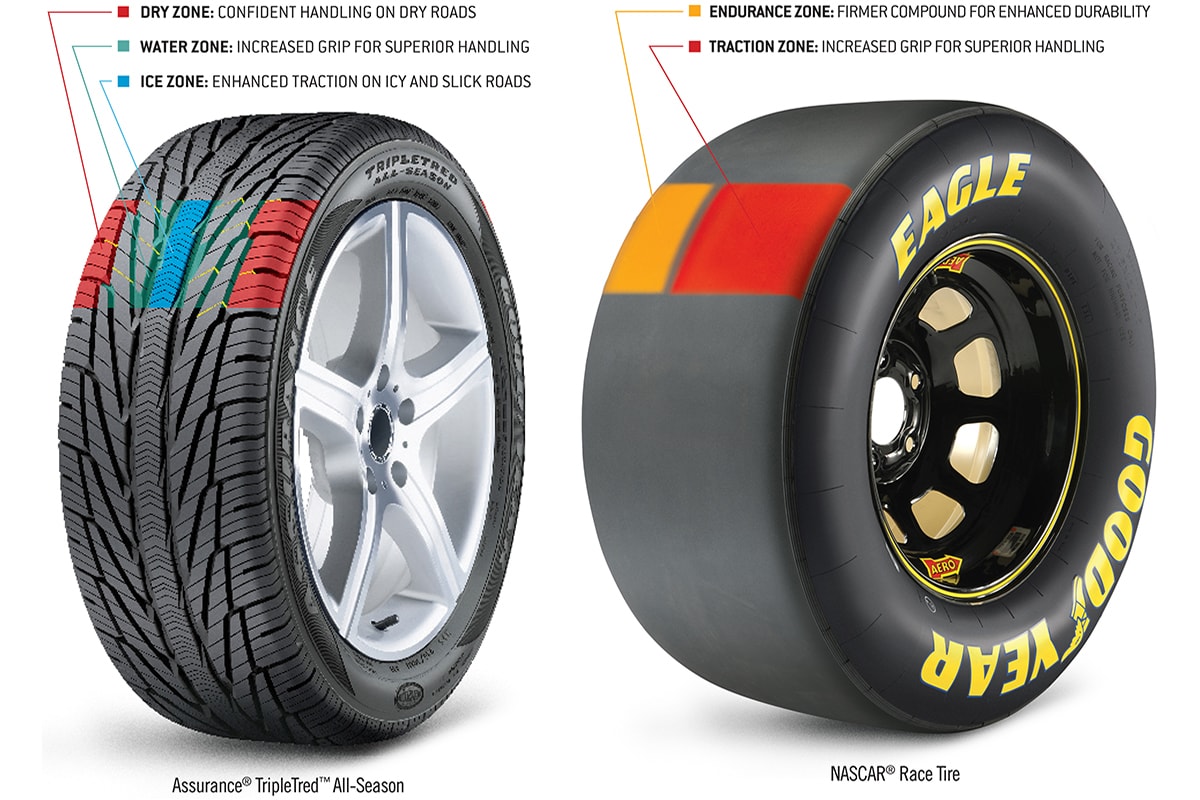 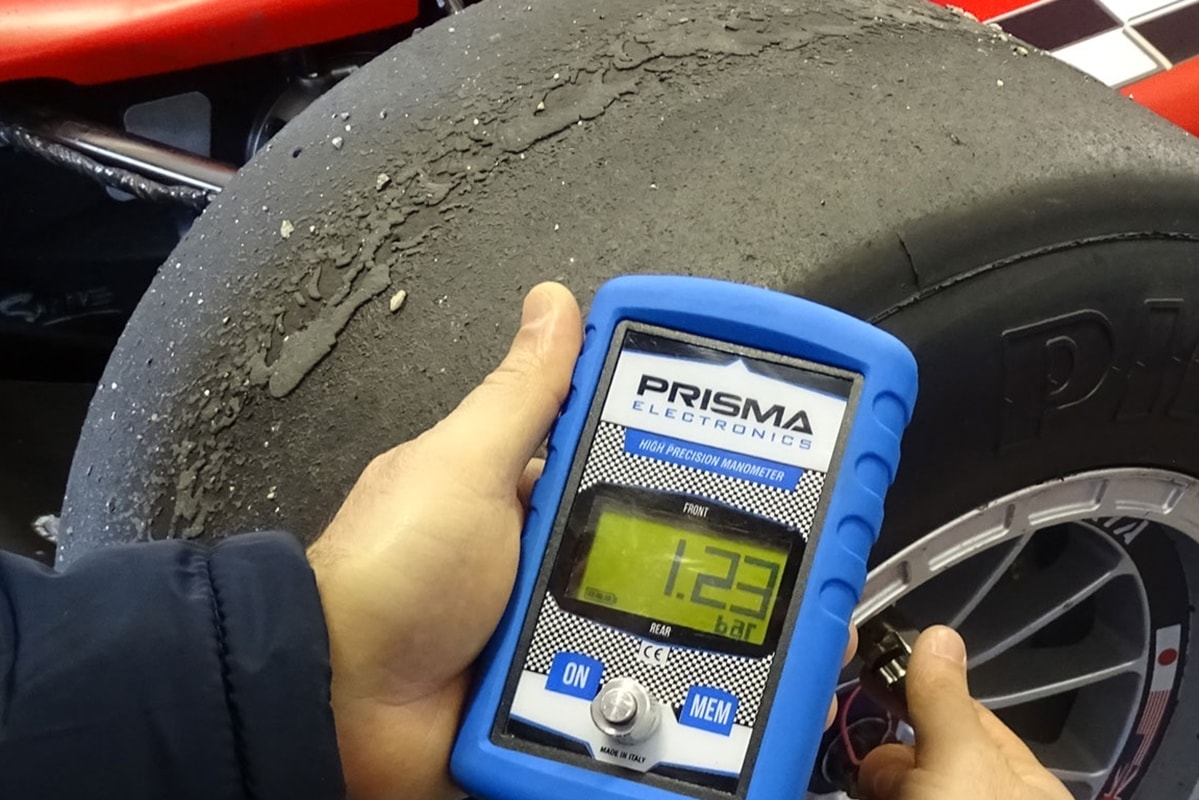 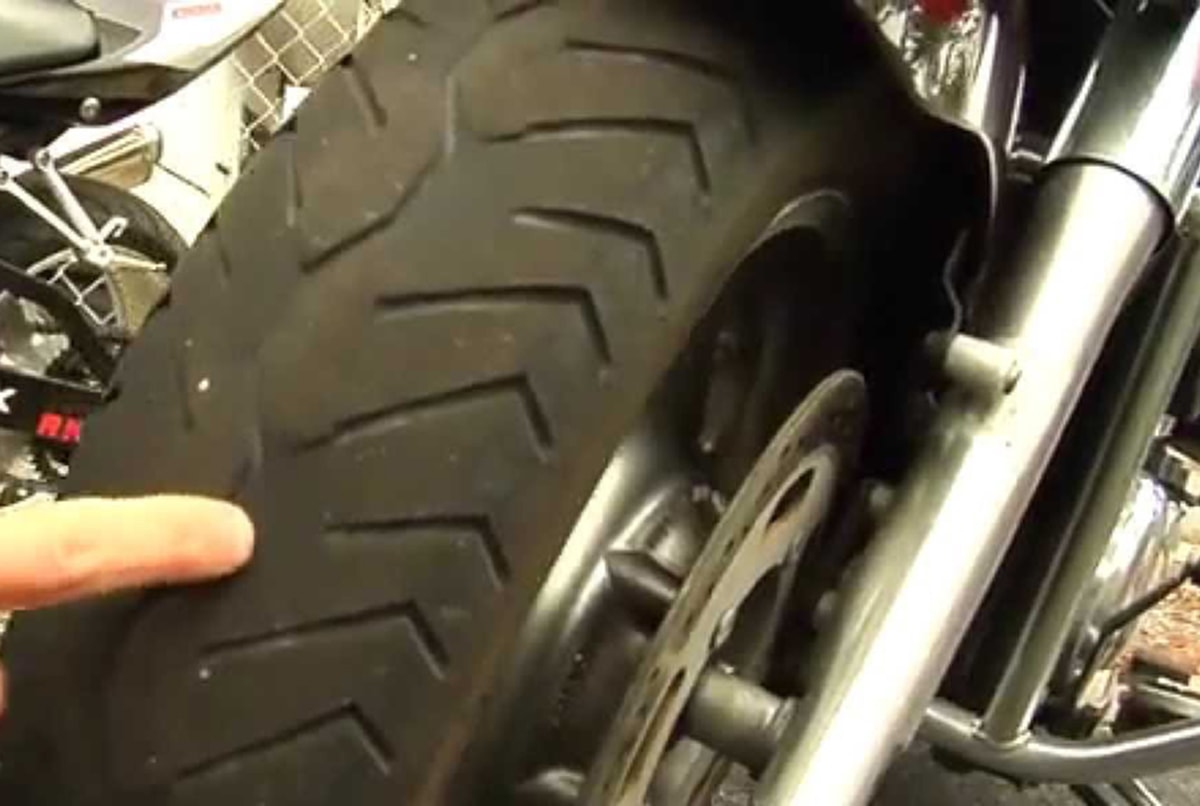 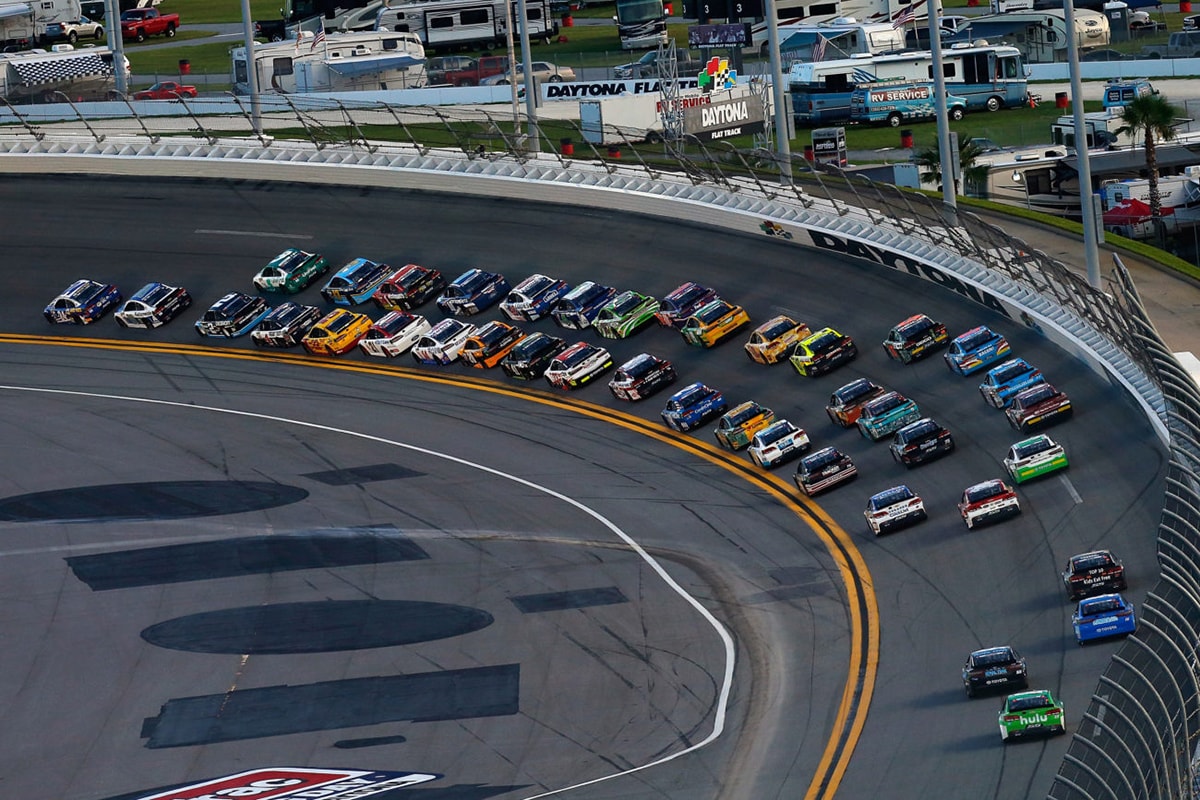 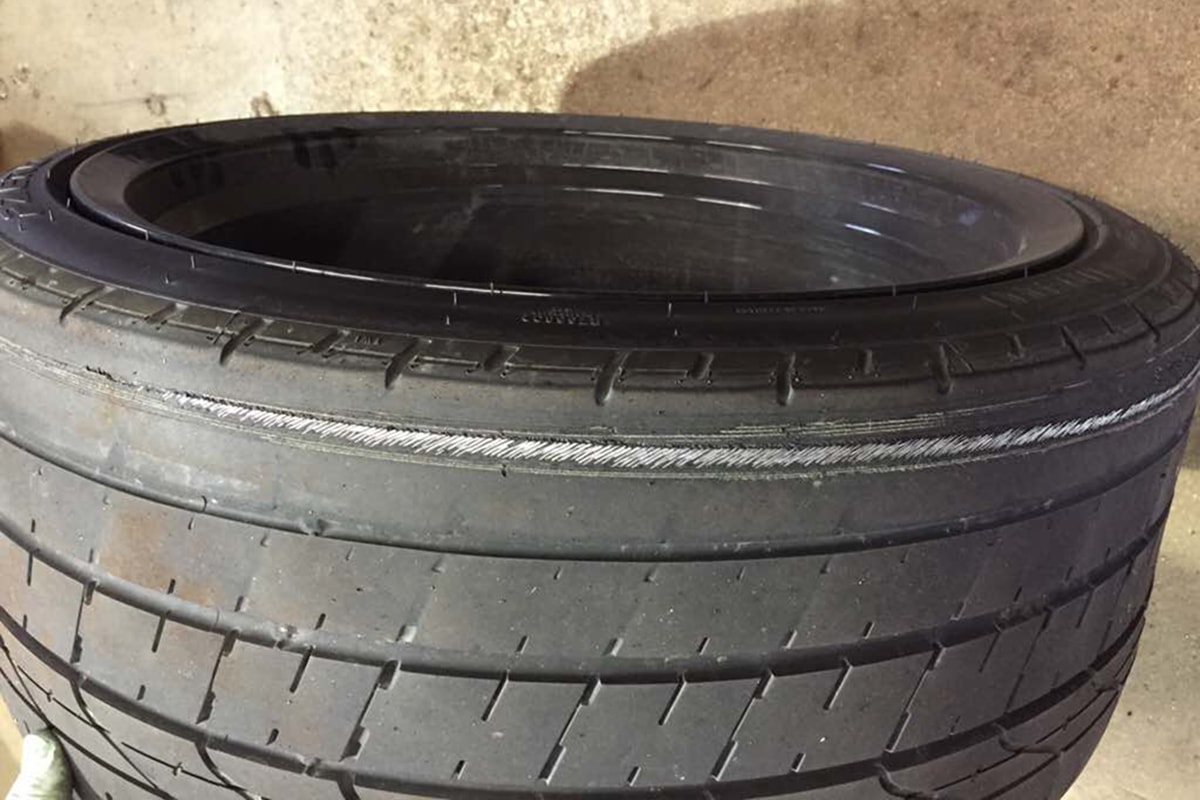 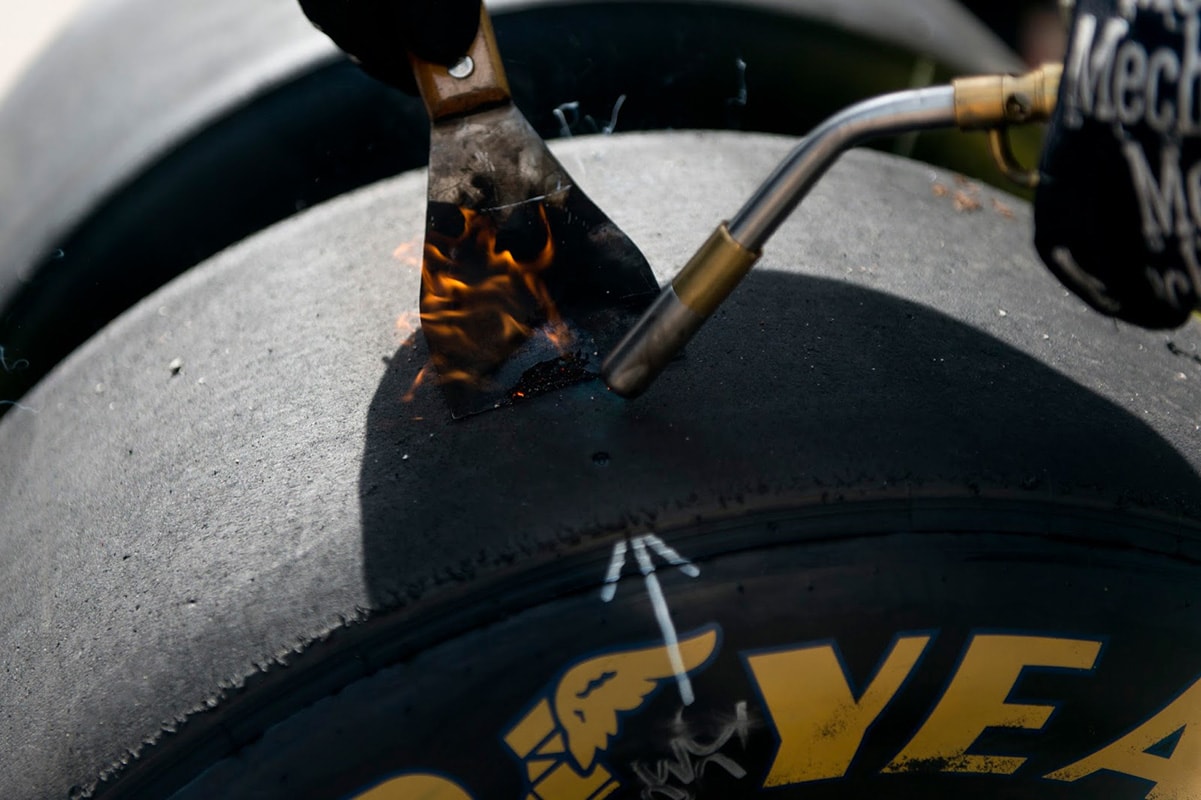 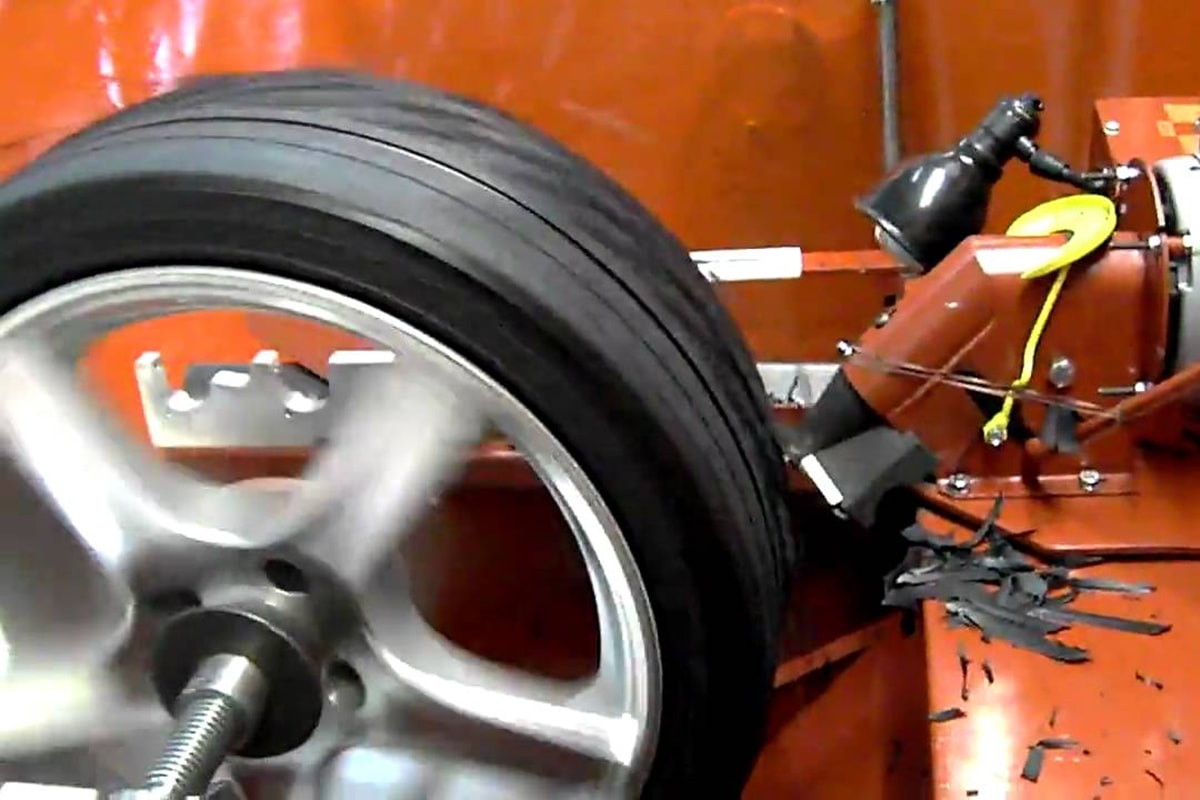 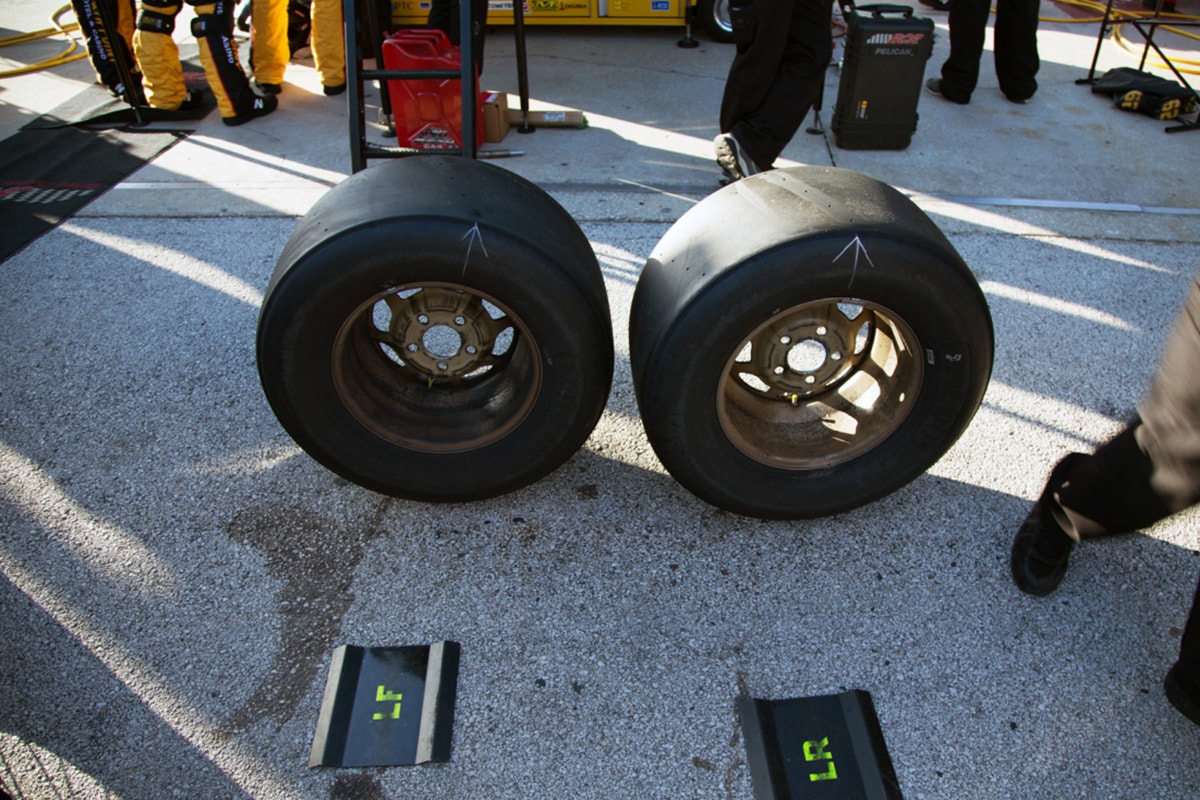 Race tires are expensive. No matter what brand race tire you use, you’re not heading over to your local tire shop and picking up four for a couple hundred bucks. The compounds out of which they’re made are more susceptible to damage from improper care and vehicle setup. Racing Junk spoke with a couple manufacturers of racing tires and a few racing teams to see how they extend the life of their tires.
Image courtesy YouTube

Heat cycle is defined as going from normal/standing/room temperature to some elevated “operating or normal temperature” back to the norm, sometimes several times. Hunters might call it “seasoning and smoking” for preservation of the meat they shoot during hunting season. Using a heat gun and roller combo will greatly reduce tire wear and allow for the 30-48 hours the various manufacturers recommend between heat cycling and race day for maximum tire life.
Put your racing tires through a heat cycle on-track and you’ll be scraping life off between heat building runs. Image from screenshot.

Your race car’s engine requires a break-in period. So do your race tires. Race tires are somewhat like a slab of beef in the 19th century. They’ve both got to be heated up and cooled down in order to preserve them. Whether you’ve got drag tires/radials or autocross or road course tires, they must be “seasoned” by going through a couple of heat cycles.
Putting race tires through heat cycles without scrubbing them against the asphalt of a track will extend their useful life and save you money. Image by Enilda Aguilar.

Mount and precision balance the tires, then put them through a heat cycle. Drag tires are easy - just hit the burnout box for a few seconds. Road course and autocross tires make you have to hit the track hard for a few laps. Then hit the pits and cool the tires with fans. Three times quickly. This hardens the tire compound slightly to provide both better grip and tire life.
One problem with putting a set of racing tires through a heat cycle on track is that they have to be cleaned afterward. Using a heating fixture eliminates the buildup that has to be cleaned off between heat cycles. Image from screenshot.

If you can, spin the tires at race-plus speeds under a heat lamp with the contact patch against a roller bar. This will allow the tire to heat-cycle while causing minimal wear versus using a burnout box or track. Doing this two or three times quickly is likely to more than double your race tire life against not breaking the tire in by putting it through a few heat cycles.
Image courtesy Goodyear.

Road racing and autocross appear similar on the outside. However, they’re as different as dawn and dusk and require different tires. Hoosier Tire told Racing Junk that they recommend their R6 tire for road racing applications and that the pit lane temperature is in the 180-200 degree range. However, their A6 wants a temperature of 110-140 degrees for autocross applications.
Not only does this image show a put member checking tire pressure after a run, it also shows the debris that a hot tire can pick up. Image courtesy Prisma Electronics.

Everyone said that the tendency to lower tire pressure to overcome “push” or “skate” is vital to both increasing the performance of your road course/autocross tires and to extending their usable life.
Tire size and inflation pressure are both affected by track banking. Image from screenshot.

If you look at a set of NASCAR tires set side-by-side, you’ll notice that one side is slightly taller than the other. If you talk to Rodney Childers or Chad Knaus they’ll also tell you that the two tires on the outside (passenger) are both slightly larger and inflated to a slightly higher pressure when their car leaves the pits.

This is because the banking adds various variables (vectors in physics) that reduce the forces pushing the car towards the wall while increasing the forces pushing the car into the track, thus counteracting the centrifugal force of the corner on the suspension. This reduces the overall need for camber because the perceived effect of gravity has been changed.
Get camber right and you’re a hero. Get it wrong and you’re a zero. Image by Enilda Aguilar.

A little camber is good so more is better, right? Well, that depends. Sure, when your tires are new, three to four degrees of camber feels great. However, bad wear patterns tend to set in much faster with race tires than they do with street tires and they tend to become accentuated faster as well. So if money is not an issue for you, go ahead, build generous amounts of camber into your chassis. However, if your name doesn’t end with Rockefeller or Gates, you need to pay attention.

Hoosier, Firestone, Goodyear and many others told RJ that their tires deliver optimum road course and autocross performance with 2.75-3.4 degrees of camber. However, they all also said that reducing camber by a half degree will benefit tire wear quite a bit while creating an almost negligible performance hit. Hoosier also said that their tires can be used with spring/shock combinations with higher spring rates for even better handling. If you’re racing on banked ovals, reduce your camber by another quarter degree.
Image courtesy BlogSpot

Your significant other may tell you that there’s no argument - shave every day. Race tires are like shaving - if you’ve got money to buy new blades every week, go ahead and shave every day. However, if the $3-$5 thousand dollars that a properly mounted and balanced set of racing tires represents a major investment, you’ve got to think “shave only for money/glory” or “shave only when you’re fighting for a season championship that means both money and prestige.”
Image courtesy YouTube Demon Tweeks Shaving Service

What does it means to “shave a tire?” Let’s say your tire lasts 50 laps but the race only got to lap 20 before a caution came out. Those laps under caution while your tires are cooling also allow them to pick up debris that detracts from traction. That debris can be removed by shaving. Shaving tires replaces shaving cream with a torch and a razor with a spatula.
These tires from the left side of a NASCAR Cup car show why we occasionally need to shave our tires. These tires show the tire debris that’s picked up by hot racing tires. Image courtesy NASCAR.

Tire shaving is both a positive and a negative. On the plus side, shaving removes everything that detracts from traction and causes loss of traction on the track. Shaving removes rubber layers that have lost their ability to provide maximum traction and that have absorbed track debris while hot. However, it also shaves off tire life by removing rubber.

Cold is rubber’s enemy when it comes to storage longevity. Without fault, everyone told us that storing racing tires in the cold during the off-season is the best way to guarantee a short life for them. Where the differences in opinion came into play was the temperatures at which tires should be stored.

Teams and manufacturers were unanimous in saying that racing tires must be stored dismounted and wrapped, preferably airtight in black bags. Hoosier says their tires must be stored at between 40 and 80 degrees, while other manufacturers have low temperatures of 35 at the low end and 100 degrees at the high. The important thing is to keep the temperature swing low-high to less than 40 degrees.

See ya at the track and remember - drive it like you stole it!
Back to Post
About Mike Aguilar 388 Articles
Mike's love of cars began in the early 1970's when his father started taking him to his Chevron service station. He's done pretty much everything in the automotive aftermarket from gas station island attendant, parts counter, mechanic, and new and used sales. Mike also has experience in the amateur ranks of many of racing's sanctioning bodies.