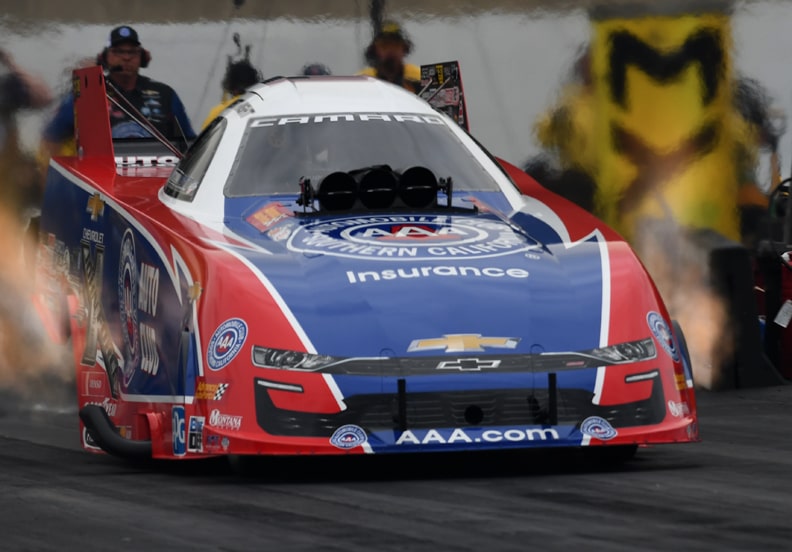 They say cream rises to the top, and that appears to be the case in NHRA’s Mello Yello Funny Car standings as the series’ Countdown to the Championship enters its fourth of six races. While John Force Racing’s (JFR) Robert Hight looked somewhat human as the six-race Countdown playoffs began, the Californian’s victory in the rain-delayed NTK NHRA Nationals at zMAX Dragway outside Charlotte, N.C. cemented his status as current king of this jungle.

Hight and his Jimmy Prock/Chris Cunningham-led crew took no prisoners at zMax with their Auto Club Chevrolet Camaro SS, despite the valiant efforts of Jack Beckman and the Don Schumacher Racing (DSR) Infinite Hero Foundation Dodge Charger SRT Hellcat group helmed by Dean Antonelli and John Medlen. Beckman made an uncharacteristic error and fouled out in the final by 0.080-sec, allowing Hight the win without challenge.

Hight remains the guy to beat, atop the standings with 2358 points. Beckman’s not far behind with 2314, while John Force holds 2279 third-place points and DSR’s Ron Capps remains fourth with 2268. With only three races remaining and the fourth of six contests occurring this weekend at Texas Motorplex, where Hight is the defending champ, the odds are certainly in his favor. The balance of the 10 combatants are more than 100 points behind this quartet so some shuffling could commence depending on the results of these next three races.

Hight not only earned his career best sixth win of the season in the rain-delayed Charlotte race, he capped his 500th round win in the process on Monday afternoon. “I wouldn’t want to be anywhere else but right here (in the points lead). We can control our own destiny,” Hight said as he extended his points lead to 44 over Beckman. 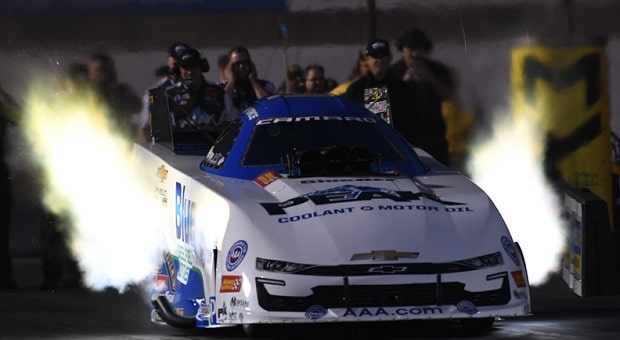 But that won’t stop his father-in-law Force, team owner and 16-time champion, who is driving like a man half his age in the 2019 campaign. Force notched his 150th and 151st victories since August and is even more animated than usual as he seeks his eighth victory in this 34th annual AAA Texas NHRA Fallnationals. “Racing is what I love to do; I’m trying to fight the old man (in me) every day,” Force said. “When I get in that car,” tuned by Brian Corradi and Daniel Hood, “I’m alive again.” Texas Motorplex is the site of Force’s debilitating and near-career-ending crash in 2007; since then he’s earned two championships during the Countdown era and is hankering for another.

Beckman was totally apologetic to his team and his fans after his unforced error in the Charlotte finals on Monday afternoon, but is looking ahead from his second-place standings. A two-time runner-up at the Dallas track, he attended the first national event at the Motorplex in 1986 while still serving in the Air Force. While the California-born’s father lives close to the track and he’s had some success, “The one thing that track hasn’t done is give me a win, and that’s the No. 1 priority on my drag racing bucket list – win Dallas,” Beckman said. “After making it to the final round last race and being very much a factor in this hunt, and knowing how good our car is right now, I think this might be the year.” 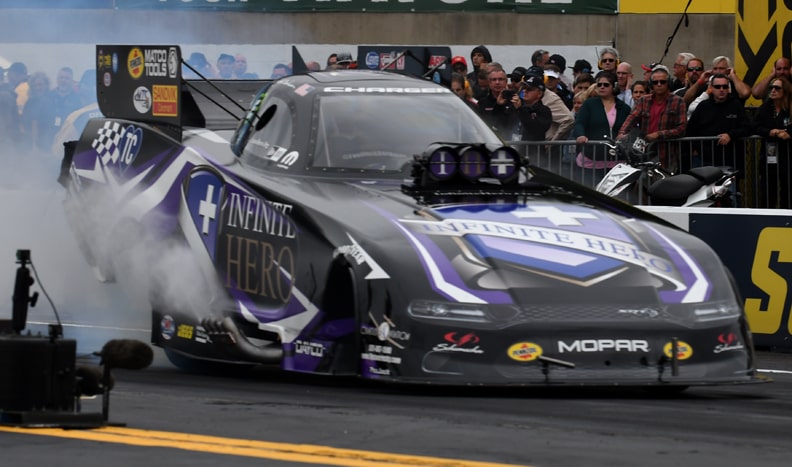 There are 18 cars on the entry list, with hard chargers Jeff Arend, Blake Alexander and Paul Lee among those looking to shake up the standings both inside and outside the top 10. Behind Capps, Bob Tasca III is fifth in his Ford Shelby Mustang with 2215 points, reigning titleholder J.R. Todd’s Kalitta Motorsports Toyota Camry is sixth (2214), DSR’s Matt Hagan has 2211 seventh-place points, followed by teammate Tommy Johnson Jr. (2191), Kalitta’s Shawn Langdon and team owner/crew chief/driver Tim Wilkerson’s Ford Shelby Mustang in 10th holding 2152 points.