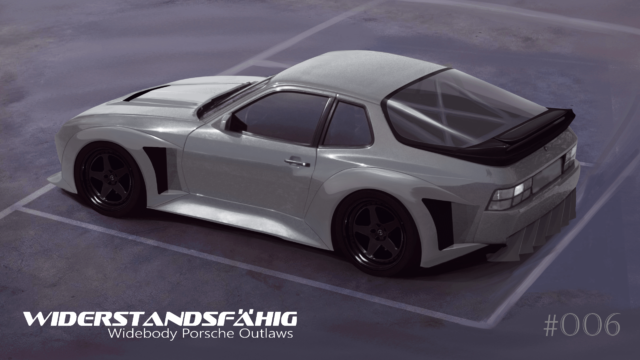 We are pleased to have Brian Bergeron and this beautiful LS swapped 1988 Porsche Widerstandsfahig 944 at our SEMA booth this year. Brian builds quite frankly, some of the most bad-ass Porsche’s we’ve ever seen! If you are going to be at SEMA this year don’t forget to come see Brian and see this Widerstandsfahig 944 in person at booth #24621!

1. Hey Brian, we are excited to have you at the SEMA booth this year! Can you tell our audience a little about yourself and how you got into this business?

Thank you. Both myself and the owner of 006 are overjoyed to be a part of your SEMA display this year. My entry into the car building arena started in 2013 with only the intent of building myself a new race car. Prior to 2013 I spent my days as a General Contractor with a weekend hobby of autocrossing my LS swapped 944. The new race car needed more rubber on the road so a widebody to envelop the 345 aspect slicks was necessary. Not wanting to run any of the available widebody kits for the 944, I sculpted my own. Little did I know that it would be the beginning of the my Widerstandsfahig series of widebody outlaws, then eventually lead to my second Porsche aftermarket company Project Nine. 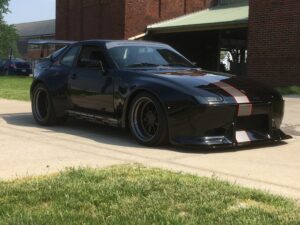 2.You are bringing a 1988 Porsche Widerstandsfahig 944. Can you tell us a little about this build?

This ’88 Porsche 944 Turbo features a host of new products for the 944 platform from my company Project Nine and multiple build sponsors, in addition to being #006 of the Widerstandsfahig series.

First off, the car is debuting a wicked new modular widebody kit by Project Nine I’ve developed over the past 18 months, a yet to be released rear diffuser, and a one off custom hood. We’ve ditched the stock drivetrain in favor of a hot cammed LS3 crate engine inhaling through a Harrop Performance Hurricane ITB system and exhaling through a gorgeous set of Kooks long tube headers developed and marketed by Slo-motion Speed. The power is being transferred by an Audi 01e 6-speed transaxle with Wavetrac LSD unit built by California Motorsports and mated to the 944 drivetrain using a Project Nine conversion kit that is making its first appearance on 006 at SEMA. Racing Pedal Boxes and I collaborated to design the first under hood dual brake master cylinder setup that will actuate the Ceika brake package. Ceika worked with me to develop the ultimate brake kit for the 944 and the first for the platform in their lineup. It features 6-pot calipers on all four corners and floating scalloped rotors.

The interior is completely custom work by my shop and Classic 9 leatherworks with a leather wrapped 6 point roll bar, custom upholstered Recaro pole position seats, dash, center console, and color matched accents. The audio has been handled with a flip face receiver, JL audio sub, 5 channel amp, and all the supporting goods presented in a respectable manner. 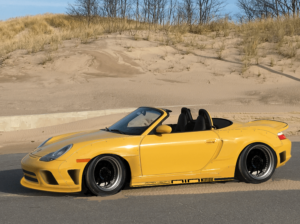 3. In the past, 944s could be had for quite a bargain and now seem to be as popular as ever. Have you noticed this trend at all?

Yes, especially the turbo models following the 930 craze that has been in full swing for a decade or better. A properly tuned 944 is a very impressive machine offering a visceral driving experience some of us die-hards crave.

Honestly, the thing I’m most looking forward to is the owner of 006 seeing what we have created for the first time in person. Although, not working an 80+ hour week will be a nice change as well.

5. What advice would you give to someone who wants to do a SEMA build?

The advise I’d give to someone who wants to attempt a SEMA build is to plan ahead and stick to the plan. It is also a must to afford yourself ample time for unforeseen hick-ups that are bound to arise during the build process. Finally, don’t wait for the sponsors to find you, be proactive. Make the calls and send the emails. At the end of the day, its all up to you.

Be sure to follow Widerstandsfahig and check out some of the work they have done!