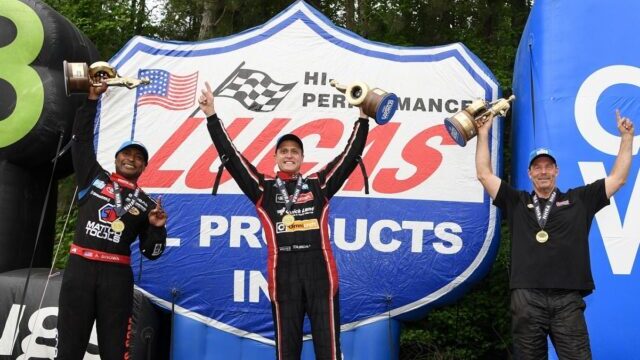 The third race of the NHRA’s 2021 Camping World Drag Racing Series season would definitely leave a mark in the hearts of both drivers and fans of the soon-to-be-defunct Atlanta Dragway. At this track’s 40th annual and final Lucas Oil Southern Nationals race, three drivers would cement their names in the history of this series and racetrack. Beginning with the NHRA’s first African American world champion, Antron Brown, who once again made his mark after taking down three-time reigning world champ and close friend Steve Torrence after besting his final round pass of 3.794-seconds at 323.81 mph with a run of 3.75-seconds at 325.22 mph in his Matco Tools dragster. Along with Brown, recent Funny Car victor Bob Tasca III once again grabbed the spotlight from another repeat champion to earn back-to-back victories at Atlanta Dragway. Despite 16-time champion John Force attempt to earn his eighth victory at this storied facility, it was Tasca who stopped this effort in its tracks with a final pass of 4.004-seconds at 326.48 mph in his Motorcraft/Quick Lane Ford Mustang. Brown and Tasca III would not be the only history makers at this weekend’s Lucas Oil NHRA Southern Nationals. In his final appearance at Georgia’s House of Speed, Greg Anderson would come home with the victory after dominating the Pro Stock class and topping off the weekend with a final impressive pass of 6.568-seconds at 209.04 mph in Sunday’s final round against Vincent Nobile. 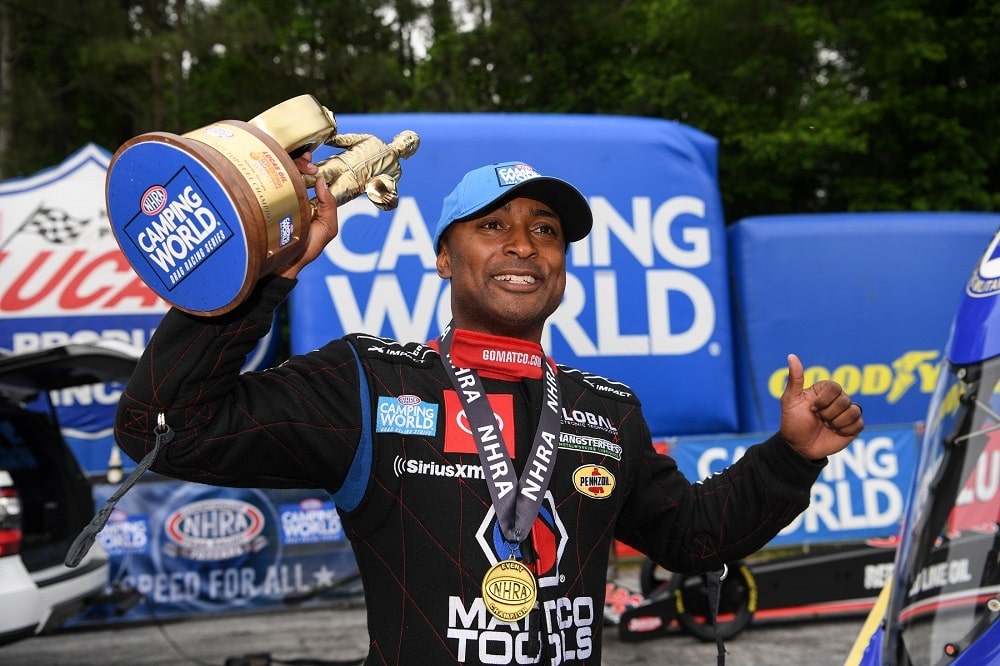 Despite beginning his final weekend in Atlanta with a ho-hum qualifying effort, three-time Top Fuel champion Antron Brown found his spark during Sunday’s final elimination rounds. Prior to his taking on recent Top Fuel victor Steve Torrence in the final round, Brown would take down Top Fuel legend Doug Kalitta in Sunday’s first round with a 3.793-second pass at 317.19 mph. As he would move through the ranks, Brown would take down No. 1 qualifier Billy Torrence with a 3.811-second pass at 321.42 mph and then slip past Brittany Force on a holeshot before taking on fellow former champion Steve Torrence.

While most were betting on the son of the famed Billy Torrence to race to yet another victory, taking down Buddy Hull, Justin Ashley, and Shawn Langdon to advance to his 64th career final round would not be enough to stop a driver who would like nothing more than to have his name permanently sealed in Atlanta Dragway’s memory book.

Despite the two former champions putting on an unforgettable duel Brown would come out on top and would leave Atlanta Dragway as its final Top Fuel champion.“To get this win is truly remarkable,” said Brown. “Atlanta has been so special to myself and this entire Matco Tools dragster team and I am so glad to earn this win for this Don Schumacher Racing team and everyone who has supported us here as well as God, who deserves all the glory for this historic victory.” 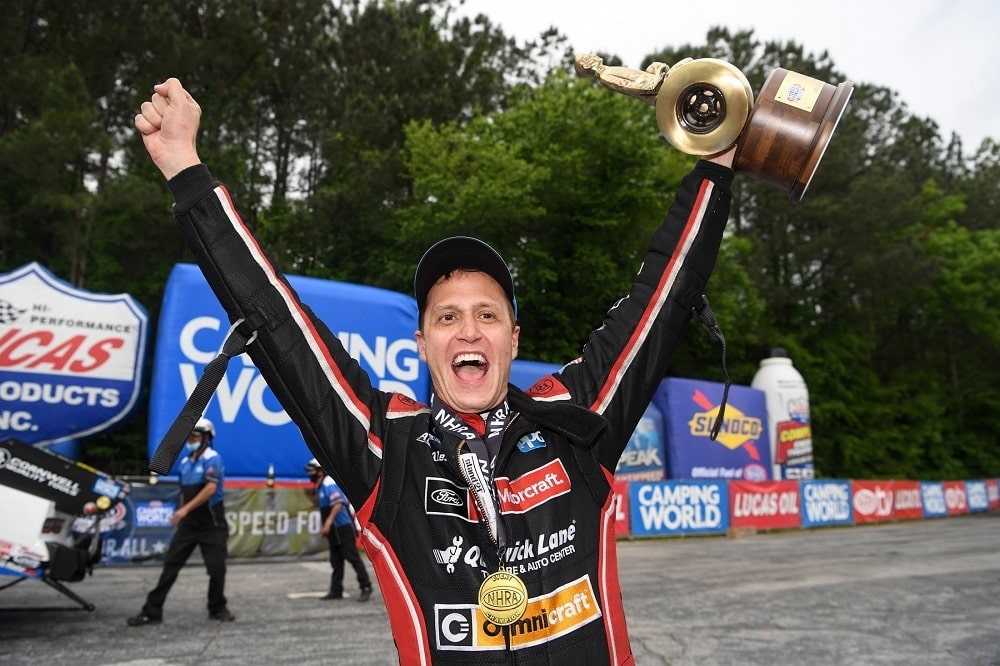 Along with Brown ending the streak of the driver he refers to as Rocky Balboa, recent Funny Car victor Bob Tasca III took his No. 2 qualifying position start to a victory over the Funny Car Series biggest legend, but not before taking down Paul Lee in Sunday’s first-round with a 4.224-second pass at 309.13 mph.

From there, Tasca and the team, led by crew chief Mike Neff, remained strong after he took down Blake Alexander a round later with a 4.014-second pass at 326.32 mph, advancing to the final round by knocking off defending world champ, Matt Hagan, with a 3.981-second pass at 327.82 mph.

Before earning yet another Wally and forever cementing his name in the history of Atlanta Dragway, Tasca would have to take down the driver most see as their mentor in Sunday’s final round. Despite John Force putting up one heck of a fight in Sunday’s final round Tasca’s best run of the weekend and his final-round performance maintained his status as a bona fide championship contender this year with a final pass of 4.004-seconds at 326.48 mph in his Motorcraft/Quick Lane Ford Mustang.

“It so special to leave this sold-out historic race with a victory,” said Tasca. “To do so against the driver that everyone wants to beat here just makes it so much sweeter. This is definitely a win that I will never forget!”

Thanks to scoring two back-to-back victories, Tasca extends his series points lead as the series heads to zMax Dragway in Concord, NC. 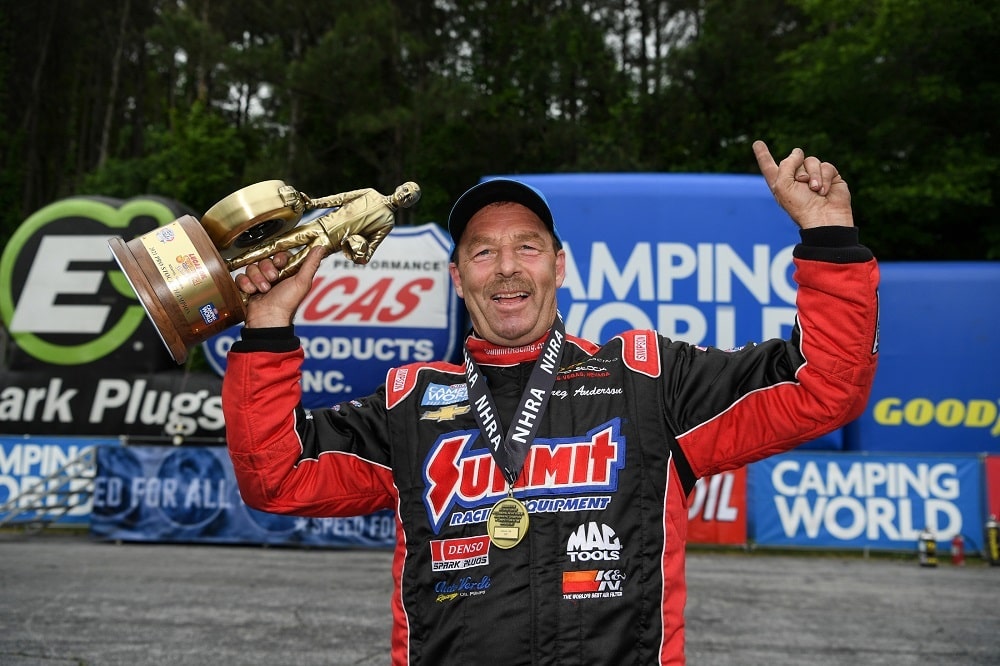 While Brown and Tasca III would take down two of the biggest NHRA legends at this weekend’s final Lucas Oil Southern Nationals race, one of the most historic drivers in the Pro Stock series would add another historical feat to his resume after a dominant performance at Atlanta Dragway. After kicking off the legendary weekend with the top qualifying position, Greg Anderson kept a pace nobody could match, going 6.560 at 209.82, 6.571 at 209.46, and 6.575 at 208.59 to reach the final round. Only Erica Enders made it interesting, posting a .009 reaction time in the semifinals. But Anderson drove past her before half-track and cruised to the win.

Following this victory, Anderson rolled up beside the equally forceful Vincent Nobile for Sunday’s final round. Despite putting up an impressive attempt to take down Anderson the legend would once again come out on top with a 6.568-second pass at 209.04 mph in his Denso Chevrolet Camaro to earn his 96th career victory.

“It was an absolute dream weekend,” said Anderson. “My Denso Chevy was absolutely flawless. I have never made four smoother, nice runs at a track that means so much to me. I love racing here and it has been wonderful, and I want to thank everyone who has helped us put both my and this team’s names in the history book at an unforgettable track.”

Thanks to this win, the Pro Stock series legend stays on top of the points heading into zMax.

The 2021 NHRA Mello Yello Drag Racing Series season continues with the NGK NTK NHRA Four-Wide Nationals at zMAX Dragway (May 14-16) in Concord, NC. Stay tuned to RacingJunk.com for all your NHRA coverage!

About Ellen Richardson 443 Articles
Ellen Richardson is the author of Behind The Wheel for RacingJunk.com. This automotive sports junkie has a passion for telling an athlete's story while also covering various racing activities. Find out more about her at ellennrichardson.wordpress.com or follow Ellen on Twitter at @ellennrich or Instagram at elnrich33.