Although the NHRA’s Camping World Drag Racing Series has had some short fields over the past few years, due to economics as much as the pandemic, interest in the sport of drag racing and, in particular, Top Fuel is increasing.

There were 20 dragsters on the grounds for the series finale, held at Auto Club Raceway (last time using that name) in Pomona last month. The November weekend saw a woman capture one of the sport’s fastest and quickest categories when Brittany Force earned her second World championship in Top Fuel, joining Pro Stock’s five-time champ Erica Enders as two of four champions in 2022. Ron Capps earned his third Funny Car title while Matt Smith executed a healthy Pro Stock Motorcycle field by taking his sixth title. 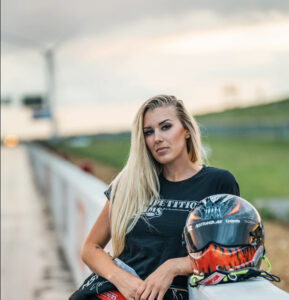 Now, as the racing world gathers in Indianapolis for the Performance Racing Industry show, another female competitor is looking to spread her wings and, hopefully join the Top Fuel field when she has the requisite licensing and experience behind the wheel.

European star Ida Zetterstrom, 28, born in Sweden and living in Finland, earned the Scandinavian Super Street Bike class championship in 2019, together with the VP Racing Fuels Special Award, for being the racer with the most notable achievements throughout the year, but has her heart and mind set on racing an 11,000-horsepower NHRA Top Fuel dragster.

She started going to races when she was three weeks old – her father was racing Pro Stock and Pro Mod, in addition to working on teams – and has been competing since she was eight. Starting, as most do, in Jr. Dragster, she progressed to earn her Super Comp license at 16, a time when most people are simply trying to navigate a driver’s license street test.

Her motorcycle drag racing career, in a class comparable to the U.S.’s Pro Street Bike, occurred because of a personal relationship with a motorcycle drag racer, but she’s always had a soft spot for dragsters. Her time in Jr. Dragster cemented that dream, but driving a real Top Fuel car would have to wait. Now that she’s had her licensing laps in Scandinavian Top Fuel, Zetterstrom has her sights set on NHRA’s nitro drag racing.

The best place to spec out possible rides, particularly at this time of year, is at PRI in Indy, a place where Zetterstrom visited last year. She’s returning to Indy next week with the full intent of connecting with American drag racers. “I’m excited to attend the PRI Show again this year,” she said. “I grew up knowing that drag racing was all I ever wanted to do, and it’s incredible to get to connect with so many people who share my passion for the sport.

“When I attended last year, it made me more determined than ever to go after my dream of competing in the U.S.,” she declared. “I plan to continue gaining momentum and experience competing in the European Top Fuel category, while I work to achieve this goal. Everything I do, I do to get better,” Zetterstrom said.

Having achieved the distinction, in July of 2020, of being the first woman to clock a six-second pass in the Super Street Bike class (6.985/205.9) in 2021, Zetterstrom made the quickest full pass for licensing in European Top Fuel history, with a blast of 3.862 seconds. In the first FIA event of 2022, she and her crew set a new European record at 3.782 seconds at 301.92 mph, driving the RF Motorsport Top Fuel dragster.

Zetterstrom is looking forward to joining Brittany Force and Leah Pruett full-time on the NHRA tour, but like every other racer out there looking to move up the food chain, she’s got to earn her stripes to make it to the NHRA’s Camping World water box.