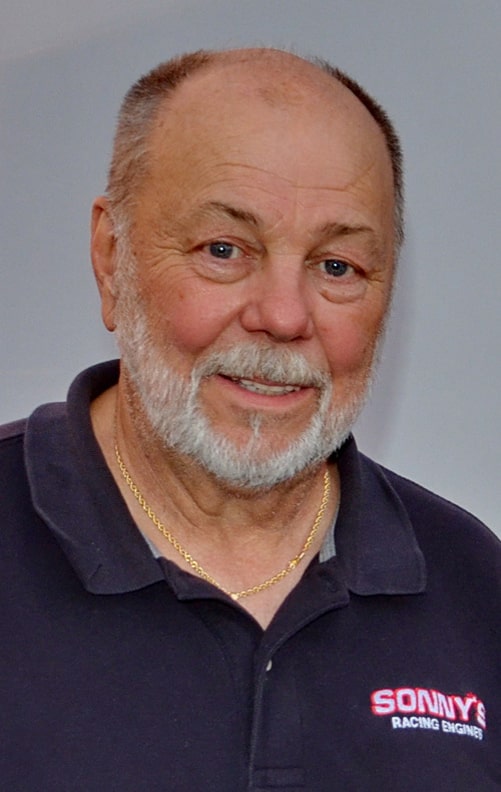 Sonny Leonard, known for his canny ability to wrest power from an internal combustion engine, passed away on Sunday, January 10 at the age of 77. The cause of death was pneumonia. Leonard’s company, Sonny’s Racing Engines is centered in Lynchburg, VA, and has been in operation for 53 years, building some of the most powerful big-block engines used in drag racing and truck-pulling competition.

Like so many, Leonard, whose full name is Estol Fletcher “Sonny” Leonard, started building engines as a hobby. His success brought the mechanic to start his own company in 1968 as his exploits in building clean, fast, ever larger engines brought him a legacy of satisfied customers. He accumulated 13 IHRA Pro Stock world championship and his engines have held world records, taken national event titles and championships, primarily in mountain motor Pro Stock, Pro Nitrous and Pro Modified straight-line competition as well as in tractor pulling.

Leonard’s engine-building concern was successful from its start, requiring moves to ever-larger headquarters that could accommodate the necessary machine shop equipment he needed. It paid off handsomely as he continued to produce ever larger engines. What brought Leonard superstardom in the engine-building community was his 615-cubic-inch engine kit sold to Bill Kuhlmann in 1987. The little known midwestern racer added some nitrous and ran the engine in his Top Sportsman full-bodied car, becoming the first driver in a door-slammer to reach 200mph in the quarter-mile.

That engine put Leonard on the map professionally and hastened his celebrity as the progenitor of big-inch mountain motors. He also advocated for upcoming engine builders as he donated engines for the Performance Racing Sunnen Engine Charity Sweepstakes at December’s PRI shows. His donated engines in 2018 and 2019 helped raise more than $220,000 for Victory Junction. PRI’s president, Dr. Jamie Meyer noted, “Sonny Leonard will be missed not only for his engine-building skills and knowledge, but also for his good nature and charisma.”

Leonard’s company stated on Sunday: “As most of you have heard, unfortunately Sonny passed away this morning. He will be deeply missed beyond what words can describe, but we want to reassure our customers that Sonny’s Racing Engines will continue to thrive and remain open for business.”

Leonard leaves behind his wife of 52 years, Frances, son Larry and daughter Kelly Leonard Ward, along with three grandchildren. A service celebrating his life is being held on Thursday, January 14 at Thomas Road Baptist Church with interment at Fort Hill Memorial Park. In lieu of flowers, the family requests memorial contributions to St. Jude Children’s Research Hospital.