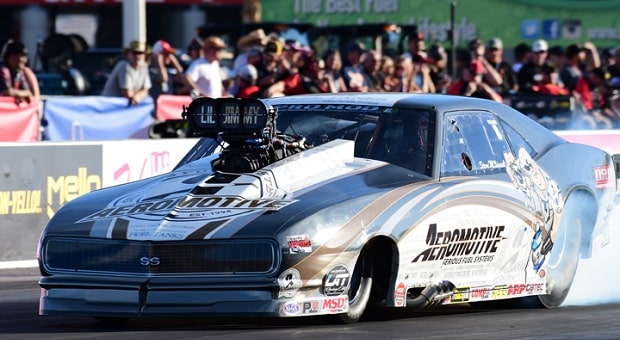 After leading Erica Enders to two consecutive NHRA Pro Stock championships, Elite Motorsports made the ill-advised switch from Chevrolet to Dodge affiliation – just as the category was swapping its carbureted engine induction for electronic fuel injection.

It was a choice they quickly regretted, but they still stayed with their Dodge Dart racecars for a full, 2016 season. Quickly reverting to Chevrolet Camaro racecars a year later, Elite needed seasoning time to get their ducks in a row and regain the success they’d enjoyed in their previous incarnation.

One of the more intriguing aspects of Elite’s expansion is its affiliation with Modern Racing, a venture formed by Justin Elkes, whose expertise in electronics and talent in tuning race cars is bound to help Elite’s Pro Mod operation.

Elkes and his Modern Racing enterprise are charged with construction and assembly of the three turbocharged Pro Mod Elite Motorsports entries, the 5th generation Camaros for Enders and Laughlin, together with the 2013 Mustang assigned to Matusek. In addition, Elkes’ Modern Racing enterprise will be responsible for operation of the team and for shop-based and on-site tuning of the cars and engines.

“This is extremely exciting,” Elkes said. “We’ve tried to work together for many years and it finally worked out,” he said of aligning with Freeman and his Elite operation. “This really kind of fit with the business model we’re pushing. We’ll be preparing the cars over the winter and I think what we’re going to do has a chance to be groundbreaking.

“We know we have drivers that can win races, and it’s going to be exciting to help them achieve that and watch them grow in Pro Mod.” Matusek has an extended career in the category, and his expertise as owner of Aeromotive should be instrumental in helping Enders and Laughlin up their games. “We’re putting some great pieces together and we’re looking forward to having Elite Motorsports on our client list.”

In addition to its new foray with Elite in Pro Mod, Modern Racing is expanding its on- and off-track presence in Professional Drag Racers Association (PDRA) racing, providing tuning, consulting, wiring and fabrication services for several teams. Elkes recently acquired a new mobile support trailer for its PDRA activities.