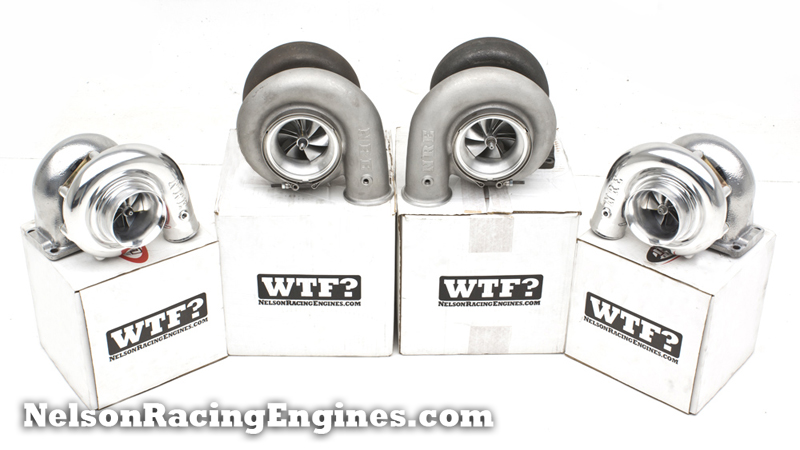 How do you give yourself a competitive advantage on the strip with your LS crate engine? Admittedly, LS crate engines are awesome powerplants “fresh out of the box.” However, there are always ways to improve on excellence when it comes to racing engines. All it takes is a little (or a lot) of money. That’s the nice thing about working on cars; you can always make them better, or faster. One way is to add a turbo. We’re going to take a look at what turbos are, for those that don’t know yet or need more info, and then we’re going to look at some standalone and kit turbos designed for LS engines. We’ll also look at intercoolers to help you squeeze every horse out of your engine.

The powered turbine is installed in the engine’s exhaust stream right after the exhaust manifold. The hot, expanding exhaust gases racing through the exhaust system impinge upon, and hit, the impeller blades of the compression turbine, causing that turbine to spin. Connected to that turbine is the driven or powered turbine that makes up the compressor section of the turbocharger. The compressor section of the turbo takes fresh air from outside the engine and compresses it, after which the air is measured and directed through the intake system and finally to the combustion chamber of the engine after being mixed with fuel.

All Turbos Require a Knock-Off or Blow-Off Valve

Since a turbocharger is driven by the exhaust gases exiting the combustion chambers, it takes a little time for the turbine speed to slow down. While the turbine is slowing down, the turbo is still building pressure, known as boost. This boost causes problems when you’re trying to slow down, like not being able to slow down. It can also cause problems when shifting, like causing the engine to over-speed and sustain internal damages.

This condition is mitigated by using knock-off or blow-off valves (BOV), also known as a wastegate. These valves are connected to the throttle system, either electronically or by using vacuum. With electronic systems, the valve is connected to the throttle position sensor (TPS). When the driver’s foot is lifted from the accelerator pedal, the BOV is instructed to open and release the excess pressure. With vacuum actuation, vacuum increases when the pedal is lifted, this increased vacuum causes the BOV to open and release excess pressure. This is the whooshing sound you hear from turbocharged engines these days.

How Turbos and Their Systems Are Rated

Turbos are rated based upon the amount of extra compression- known as boost- that they can deliver. An average street turbo for a daily driver is going to generate in the area of ten to 14 pounds per square inch (PSI). On the other end of the spectrum, the kind of turbos we want for our strip burners develop more than 30 PSI. The higher the boost generated, the more horsepower and torque the engine will be able to develop.

Another rating method for turbos uses the size of the impellers and their housings. For instance, the Nelson Racing Turbos listed below are rated at 72 and 88 millimeters. The larger the turbo, the more air it can move. Size rating isn’t necessarily a rating of the amount of boost the turbo can generate.

Chances are, if you have an LS crate engine that can develop over 1,000 HP, you’re going to rule the strip. While Nelson Racing Equipment won’t guarantee that their Symmetrical (both sides being sized equally) turbos will generate 1,000 HP, they do have spec sheets showing their turbos being used in small block engines generating well over 1,200 HP and they do say their turbos can generate up to 100 HP more than competing turbos.

NRE Mirror-Image symmetrical turbos are cool in more ways than just the amount of power they develop. These turbos are engineered to look good and sound good while they generate gobs of power. They’re also designed symmetrically-impellers on opposing sides spin in opposite directions and the discharge side of each matches. No more wild-looking header tubes to matchup with the turbo inlet. Matched sets start in the $3500 price range.

Gale Banks Is the Turbo God

Gale Banks Engineering has been designing performance parts since I was in diapers. That’s almost 50 years they’ve been satisfying the needs of power junkies around the country and around the world. In some circles, Gale is even referred to as the God of turbocharging vehicles. GBE makes arguably some of the best turbos for LS crate engines on the market. If I have my way, I install nothing but Banks technology when I build a strip burner.

The Gale Banks product line isn’t based upon a particular body style, but on engine combinations. To be more exact, they’re designed to work with GM and Dart small block engines with aftermarket electronic injection and ignition systems. Give them a call and speak with one of their advisors and they’ll walk you through the selection of the best Banks Turbo for your needs.

Turbo Kits from CXRacing Help Generate Up to 900 HP

CXRacing designs and market a number of turbo kits for LS engines. An example is this twin turbo kit for small block Chevy engines ranging in size from 265 up through 400. The kit includes everything you need except an intercooler (discussed below). CXRacing leaves the final assembly and welding of the piping necessary to you so your installation can be customized to fit your engine compartment.

Granatelli makes an awesome twin turbo intercooled kit for LS engine packages. Most of these kits are originally designed for use in newer Corvettes and Camaros using the LS engine, but they can be easily and quickly modified to fit into and under older cars. Granatelli specs say that at only 5.5 PSI of boost, their kit for the 1997-2004 LS1/LS6 engines generated 500HP at the rear wheels. This is great for tooling around town with a little punch. This kit allows for boost to quickly be bumped up to 22 PSI and more, with 22 PSI generating 1000 real world HP at the rear wheels. These numbers were generated using 91 octane pump gas, not racing gas.

To Make Optimal Power You Need an Intercooler

One thing that surprises most people about turbocharging is that the process of compressing the incoming air adds large amounts of heat. People feel the air being released from a balloon or from a pressurized air nozzle and it’s cool. It’s usually quite a bit cooler than the outside air. This is because the air is pressurized and moving faster than the outside air. So, people expect the compressed air coming out of a turbocharger to be cool as well. Why is this important? That’s easy, for every difference of 11 degrees of the incoming air charge, one percent of total horsepower is either gained or lost. If the incoming air is 100 degrees hotter than the ambient air, that could be a loss of close to 100 horsepower with a 1,000HP engine.

Because of this, we use intercoolers when we boost an engine, whether we’re using a supercharger (belt-driven compressor) or a turbocharger (exhaust driven compressor). The intercooler works like your car’s radiator, except instead of cooling the engine coolant, it cools the intake charge of air, causing it to be denser, and capable of producing more horsepower.