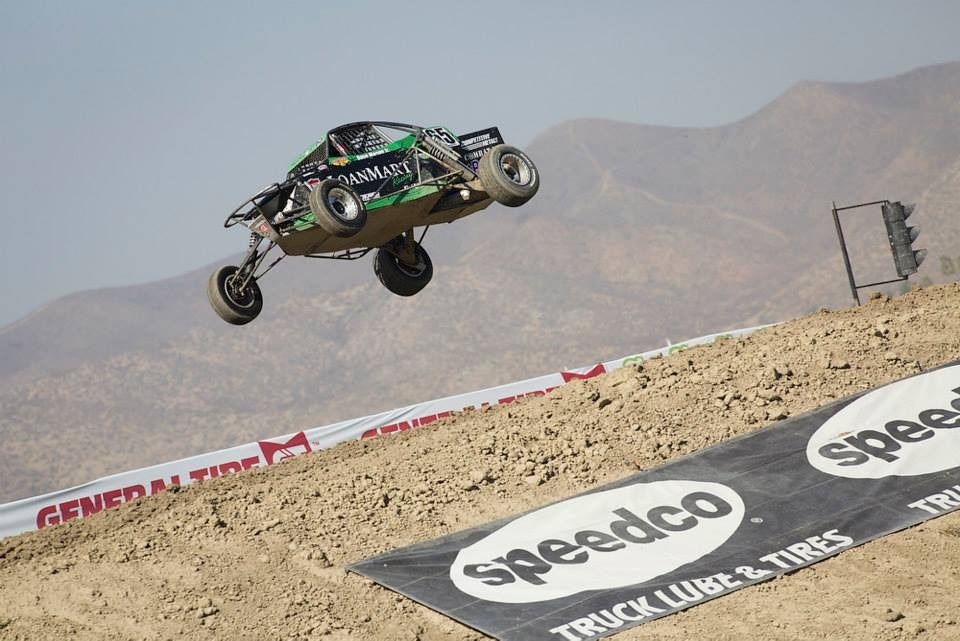 Sure, Pro Buggy off-road racing looks as safe as flinging a life-sized, splayed-leg spider crab with wheels off a cliff. But you can’t deny the fun! Or the skill required to run these exoskeletons with canvas at high revs over high, high hills.  Dave Mason, Jr. can tell you a little bit about that fun – he’s having a ton of it as a rising star in the Pro Buggy class. And his dad, former Baja racer David Mason Sr. was the one who first showed him how it’s done.

Dave, Jr. has been racing since he was 12 and was riding dirt bikes and quads since he could walk. Starting off in the Trophy Kart class, Dave quickly moved on to small off-road trucks, then VW limited-power buggies, and now runs a pro buggy.  “My dad has been racing for over 25 years – in Baja and all over the U.S. I loved going to his races when I was a kid,” Dave Jr. says of the origin of his interest in off-road racing.  “He’s been a huge inspiration!”

Dave is also a hands-on participant beyond driving. He started out working on his dad’s race cars during the summer, and learned from that experience. “Every step of the way, I’ve done the work on every vehicle at every stage of my career,” he explains.

Dave moved into the Pro Buggy class this past year as a rookie, with sponsorship from LoanMart, and as with the other classes, Dave, Jr is giving everyone a run for his money.

“Yeah, I’ve been pretty successful,” Dave says without false modesty, but with a true reverence for the sport, and for the skill and luck he possesses. “We’ve had a really great couple of seasons.”  That’s a bit of an understatement – last year’s run in the Lucas Oil Off Road Racing Series saw five 2nd place finishes, and a 2nd place finish in the Challenge Cup in his LoanMart Pro Buggy.

This season, Dave is aiming for the championship, and despite his talent and skill, it will be a challenge. Not only a dedicated racer, Dave is also a college student. His week is comprised of training, racing, school, and work, including wrenching on the race car – a full time task in of itself. “After each race, the buggy gets torn down to the frame. We rebuild tranny. The whole car is brand new after each race.”

It’s a lot of work, but Dave, Jr. is committed. “I love everything about the sport,” he explains, “working on your stuff, the driving aspect, duking it out with the best in the business. I love the competitiveness and the teamwork.”

He’s going to school for his business degree, while currently working for his dad’s construction company. “Odds are, I’ll end up working for my dad after college,” he says, “But I’d really like to make racing a career. It’s all about hard work. You have to put in the time, as well as having the passion for the race it order to win. I strive to be fast and clean on the racetrack with a good reputation.”

In his rare free time, Dave does a lot of dirt bike riding, snowboarding and shooting – exciting hobbies for a committed thrill seeker. But the rest of the time, he’s focused on moving forward, and moving that buggy forward fast and furious, with speed and style. “I owe everything to my team, my dad, and to LoanMart racing and Mickey Thompson Tires, our tire sponsors.”

To catch Dave Mason, Jr. and others in this Off-Road season, check out the Lucas Oil Off Road Racing Series schedule here: http://www.lucasoiloffroad.com/schedules.