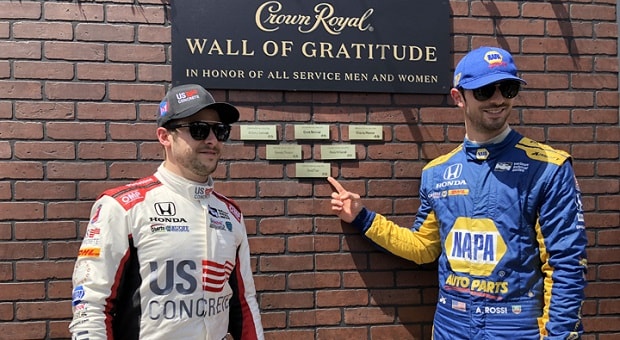 During the 101st Indianapolis 500, Andretti Autosport partner Crown Royal brought their “Live Generously and Life Will Treat You Royally” campaign to Indianapolis Motor Speedway, enabling fans of legal drinking age to submit names of their military heroes for display on the Crown Royal Wall of Gratitude.

This year the company is taking that initiative even farther, starting their Wall of Gratitude campaign at the 44th Toyota Grand Prix of Long Beach and continuing through to the 102nd Indy 500. In honoring military men and women at the Greatest Spectacle in Racing, Crown Royal intends to collect at minimum 31,680 names of military honorees, with each name engraved on a five-inch gold plaque.

By placing these 31,680 names side by side on the Wall of Gratitude, that number will equal the length of one complete lap around the celebrated 2.5-mile Indianapolis Motor Speedway (IMS) oval.

“Serving our nation is the most generous thing a person can do for this country,” said Alexander Rossi, winner of the 100th Indianapolis 500 for Bryan Herta Autosport/Andretti Autosport in 2016. “I have the utmost confidence race fans will do their best for the Crown Royal Wall of Gratitude by Indy 500 weekend, honoring so many deserving troops and veterans.”

To green-flag this initiative, Andretti Autosport CEO Michael Andretti, together with his son racer Marco Andretti and Alexander Rossi, along with Stephen Wilson, Crown Royal director of whisky engagement submitted their own military heroes’ names to the Wall. Representatives of Long Beach’s U.S. Vets organization also joined and were recognized as part of the ceremony during the Long Beach race weekend.

Anyone can submit the names of their personal military heroes by going online: www.CrownYourHero.com and in person during on-track initiatives leading up to the biggest weekend in all motorsports, culminating in the Indianapolis 500. Andretti Autosport’s hospitality unit will be available for submissions throughout the Long Beach weekend during the the Armed Forces and Indy 500 weekends in Indianapolis.

“The month of May is such a thrilling experience for a driver, with all the history and prestige leading into the Indy 500,” said Marco Andretti. “This year, part of my enthusiasm will be to support race fans in honoring their heroes on behalf of Crown Royal on the Wall of Gratitude.”

In addition to their support for the Wall of Gratitude, Crown Royal is assembling “care” packages during activation programs at IMS, sending these packages of gratitude to deployed troops. This is an ongoing partnership with Packages From Home.