While most tracks are generally pool table-smooth, there is almost always a segment of the track that requires a bit of curb-hopping and assertive driving to get the best possible lap time. Surface changes are a part of racing, and with stiff suspension and unforgiving cars, learning how to approach them in the right way is crucial, since covering them properly is worth huge amounts of time, but doing so incorrectly can damaging your tires and suspension and lose you valuable lap time.

There are plenty of things to consider when approaching a relatively high apex curb – the shape of the corner or chicane, the amount of grip available overall, and the stiffness of the car. By bouncing over an apex curb, you can, in theory, straighten the corner out and make the radius larger, and carry more speed through the corner. This doesn’t necessarily work in practice, though, since again, there are plenty of factors that come into play.

The shape of the corner dictates how much curb should be used, for one. In a chicane, for instance, often the first curb can be attacked to shorten the distance through the complex, but the final corner requires a more delicate approach, since getting good traction is very important. The basic idea is that getting a handful of opposite lock at the exit is, generally speaking, not worth the shorter distance covered.

To reduce the chances of upsetting the car, it needs to be as straight as possible when covering the curb itself. For this reason, get direction changes done before attacking the curb – covering a curb and trying to do much turning inevitably results in a big slide. Determining how much curb to take is another question in itself, and needs to be worked out on a case-by-case basis.

The amount of grip on the painted curbs might pose an obstacle depending on the circumstances, too. In the rain, it’s usually best to avoid them entirely since they can be as slick as ice. If there’s much more grip on the asphalt itself, regardless of the shape of the corner, sometimes it’s worth avoiding the curbs. There are so many different combinations that there are no overarching truths, and finding the quickest route takes a studied approach.

However, there are some basic generalities that need to be kept in mind for the sake of lap times, as well as safety. Cars with a lot of aerodynamic dependence, like prototypes and single-seaters, will almost always be less forgiving over curbs, for two reasons: their suspension stiffness and the aerodynamic platform. Since they are so much stiffer than GT cars, stock cars, or production cars, they’ll never be as compliant and the penalty for getting a curb wrong is much worse.

Their downforce comes as a result of a stable aerodynamic platform, which means that a consistent amount of air is flowing over the wings and underbody. If the car is thrust over the curbs and its attitude changes significantly, it’s possible to lose the aero grip momentarily by depriving some part of the bodywork’s airflow, and for that reason alone, the curbs are especially lethal at high-speed.

Conversely, hopping curbs in a comparatively softly-sprung car is easier and, at times, an absolute necessity. Sometimes, the compliance of a GT car or a stock car allows for a bit of curb-rotation without much time lost. Essentially, it’s a way of turning a heavier, unwilling car, and the grip available from the suspension travel can mop up some of the post-apex sliding that would hinder the progress of a stiffer, less forgiving car.

Of course, taking too much curb is a great way to damage the underside of a car. Suspension arms tend to take a beating with really aggressive hopping, and the undertray can be punctured if too much is taken. Additionally, it’s a great way to overheat tires, as the sliding and bouncing tends to stretch the carcass and raise temperatures very quickly. In short, determining where the curb is beneficial takes some discretion, and while a curb should be attacked with confidence if it’s ultimately the chosen path, sometimes avoiding the curb for the sake of mechanical sympathy is worth considering, especially in longer races.

Essentially, curb climbing is done to maximize the radius of the corner; it helps as long as it shortens the real estate covered, and detracts from the overall performance if it results in a time-sapping slide. Surface conditions and corner priority always play a role in choosing how to approach the curbs, but avoiding them entirely is almost always a mistake. Once some confidence is summoned and the experimentation pays off, jumping over the curbs is a wonderful experience. Like dancing on a knife edge, the car is usually on verge of a spin, and the jumps, minor twitches, and compression feel like horrible abuse. With whole seconds available to the master of these sections, the reward is always worth the worry, and worth the trip to the chiropractor. 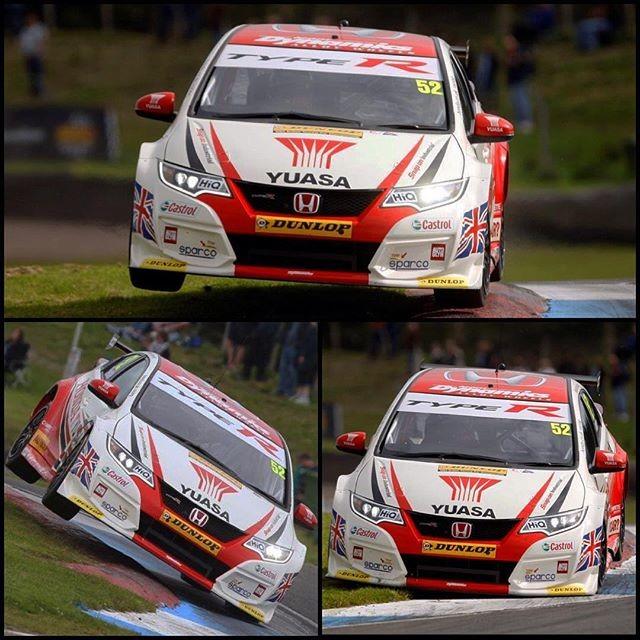 4 Comments on Conquering Curbs on the Track