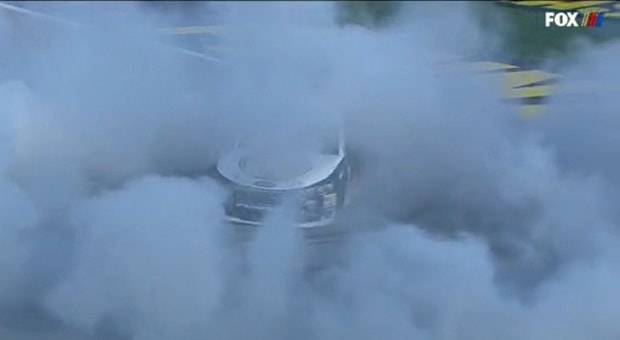 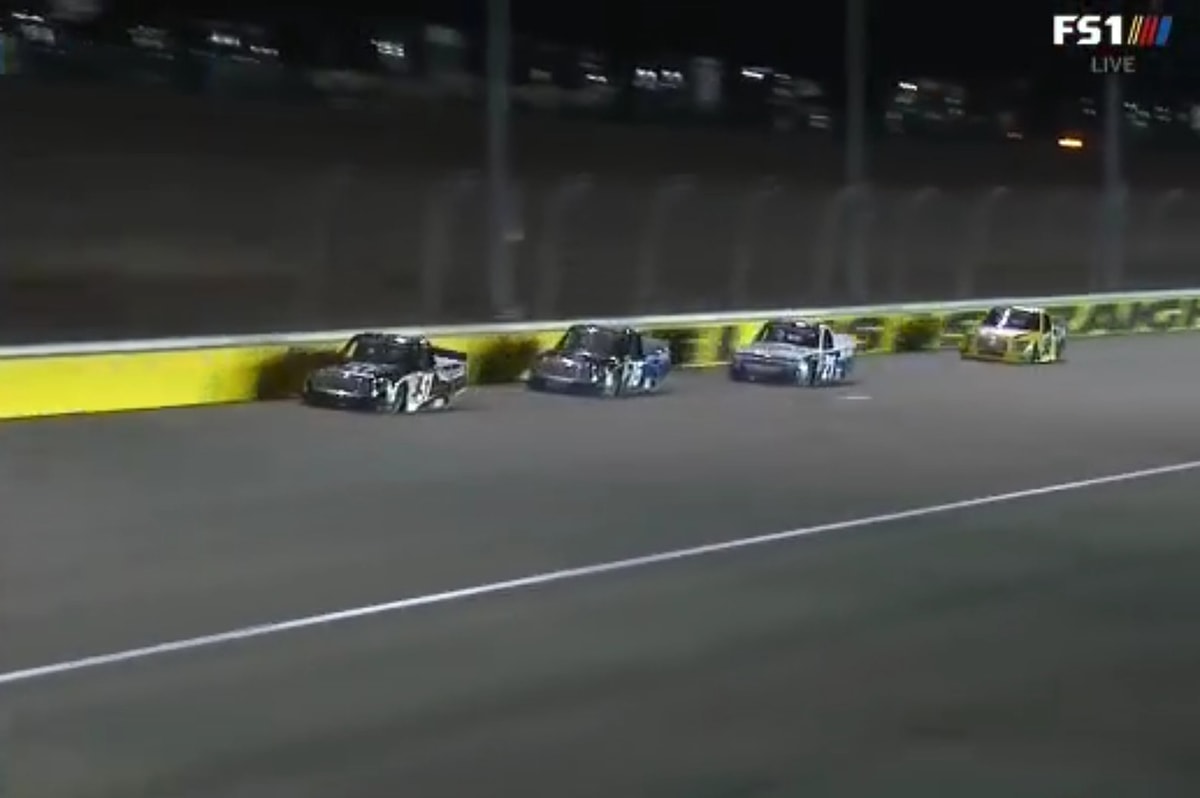 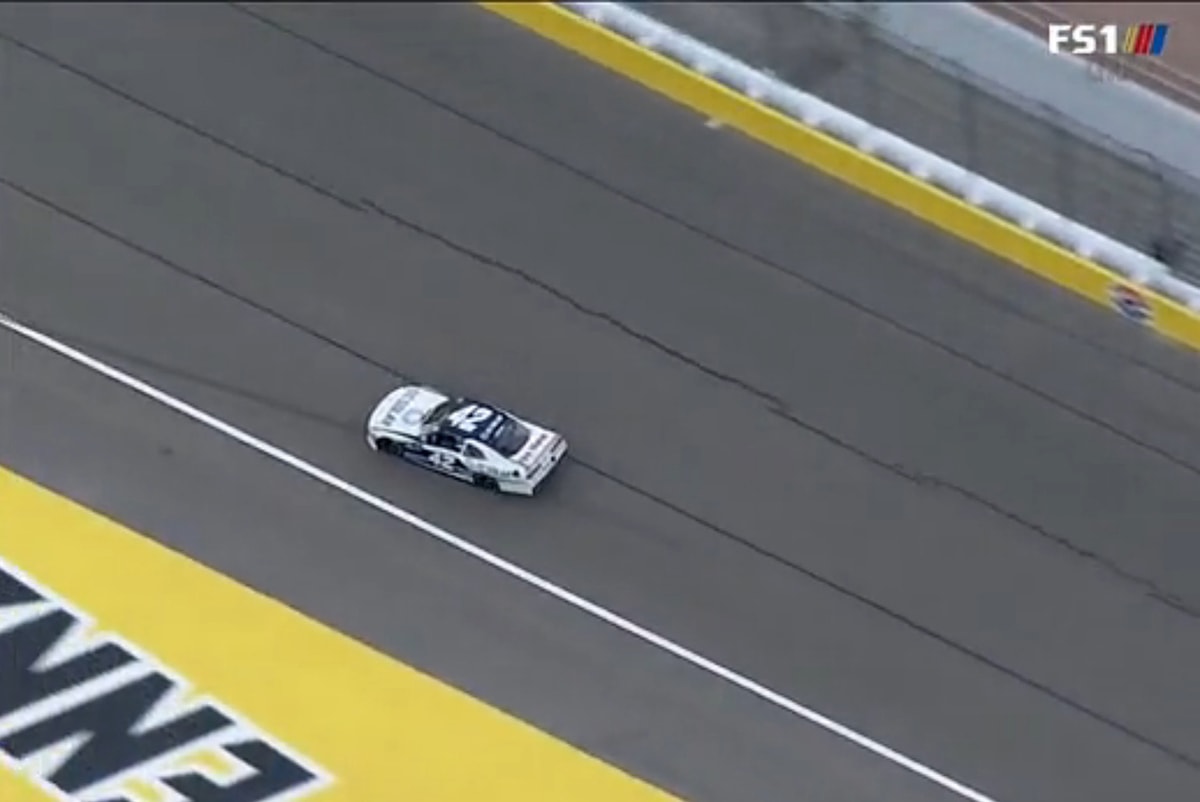 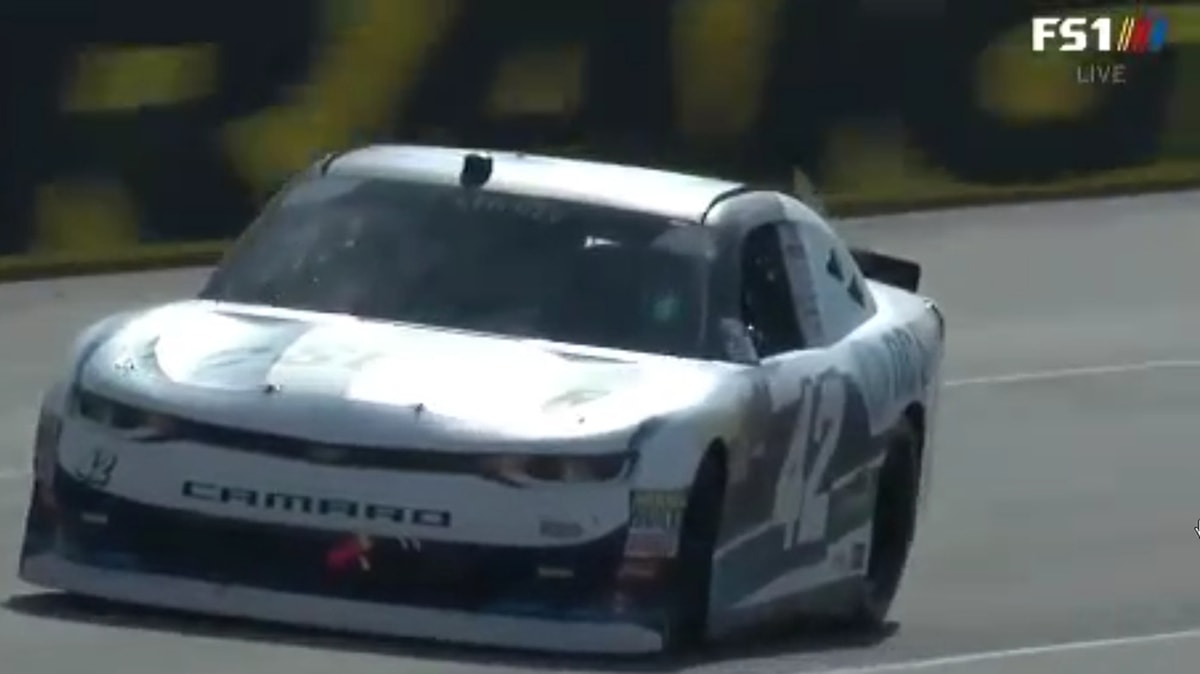 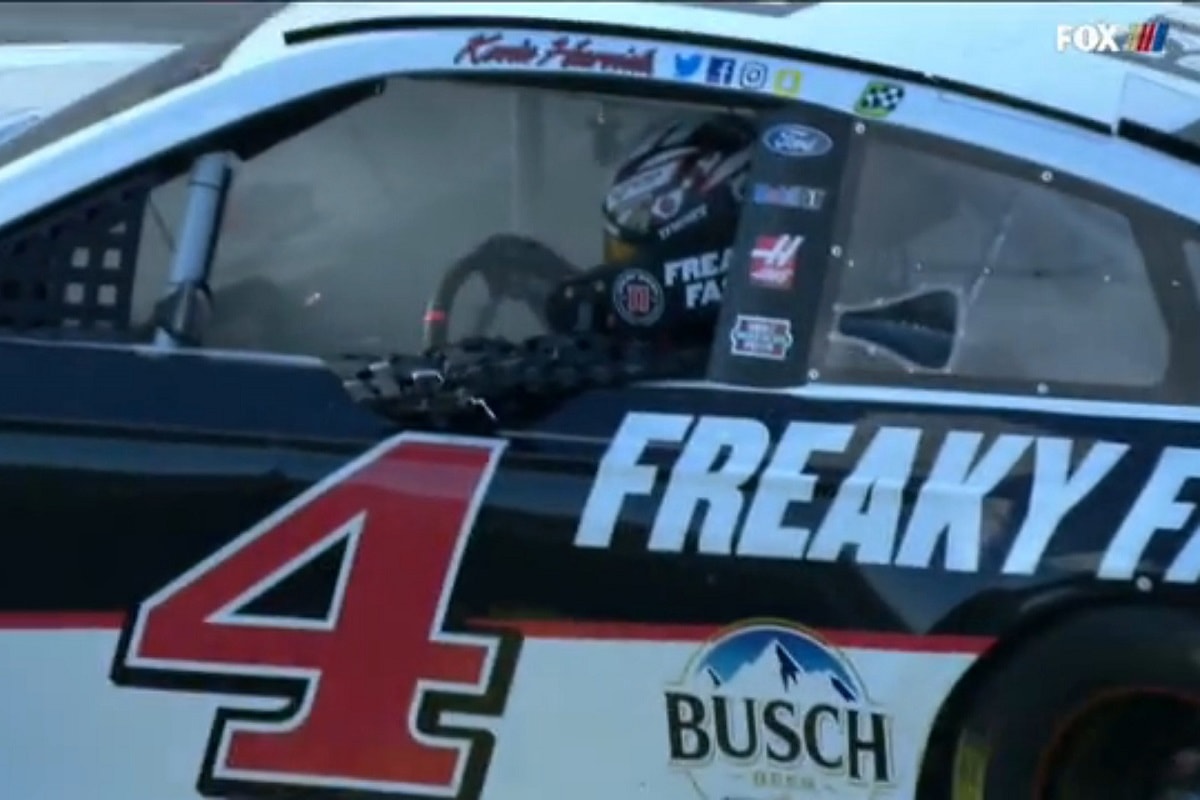 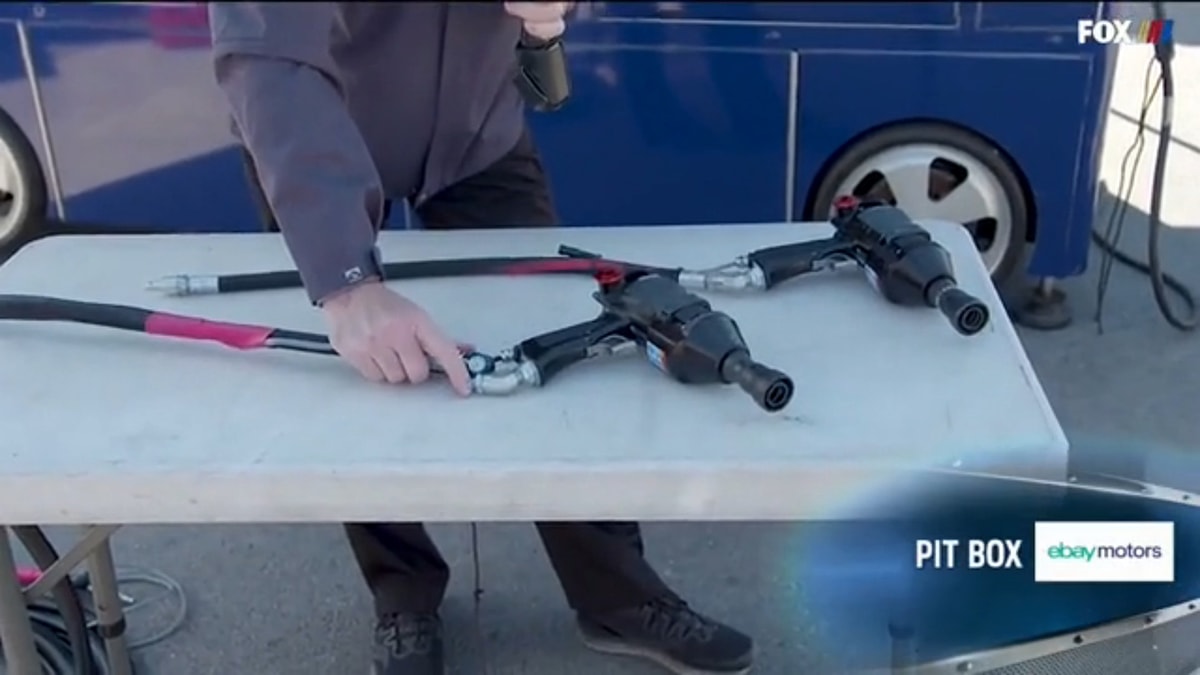 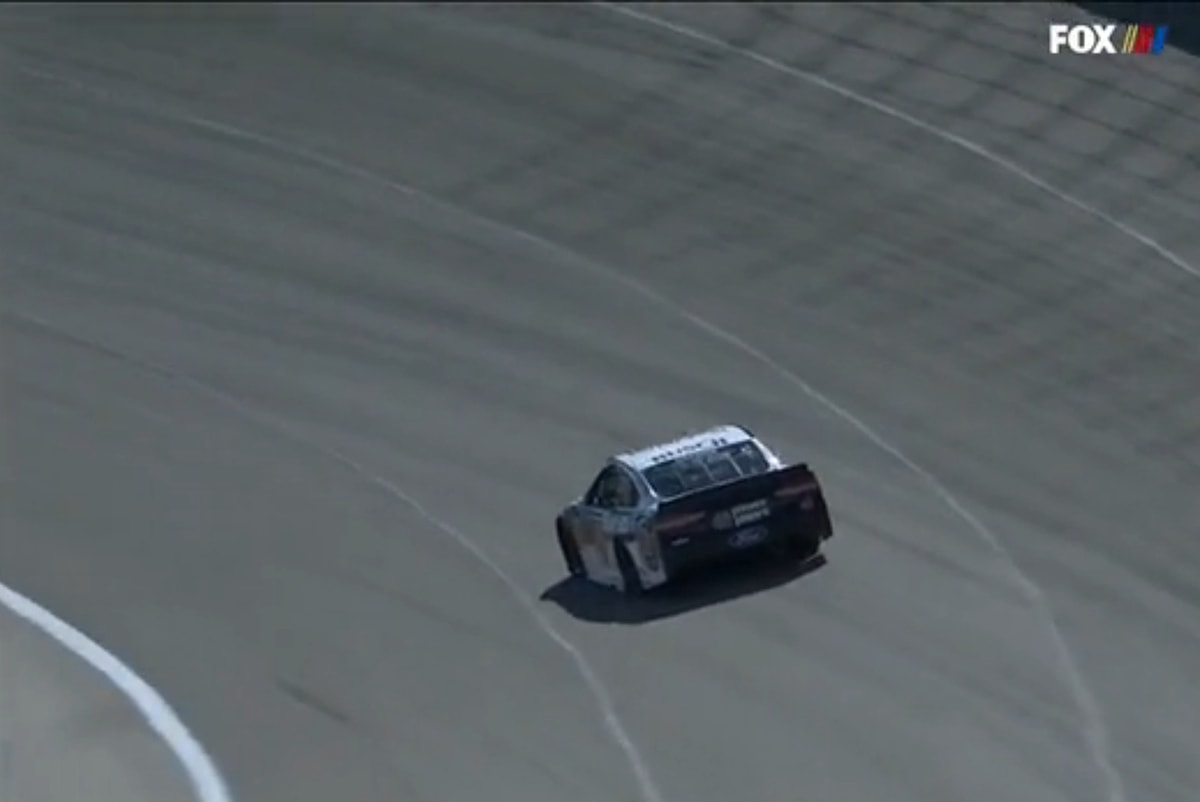 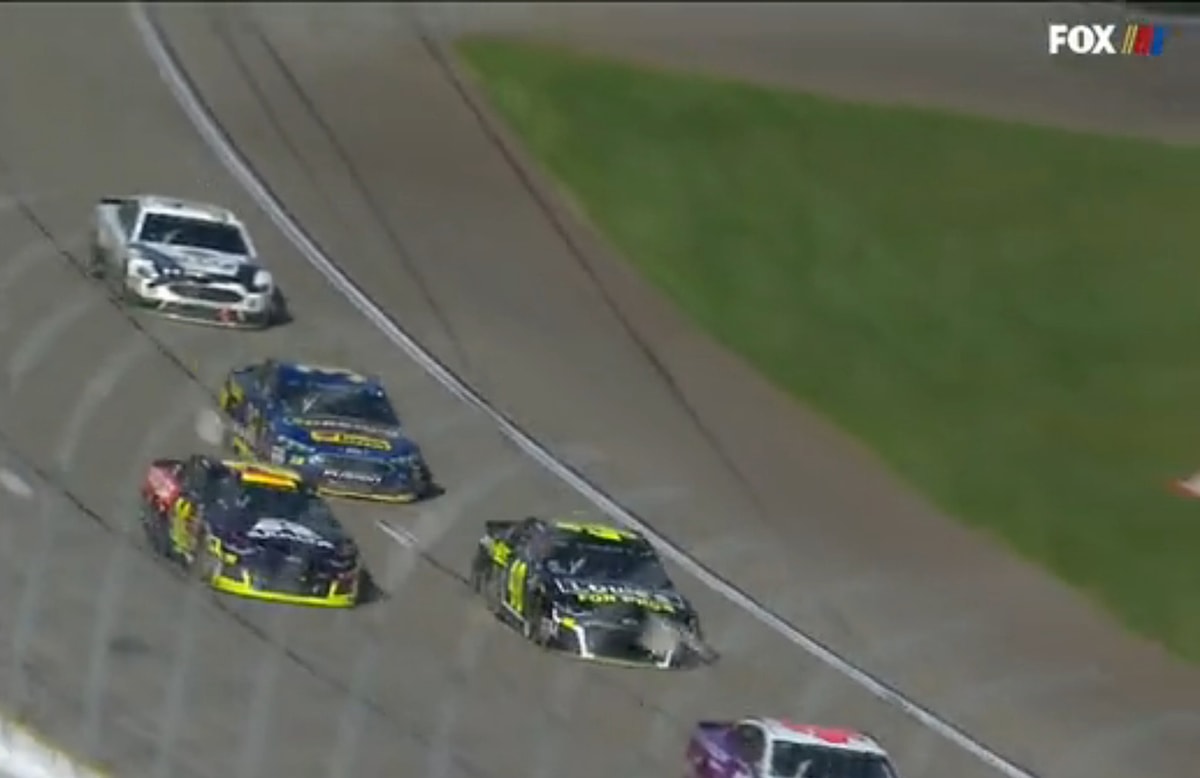 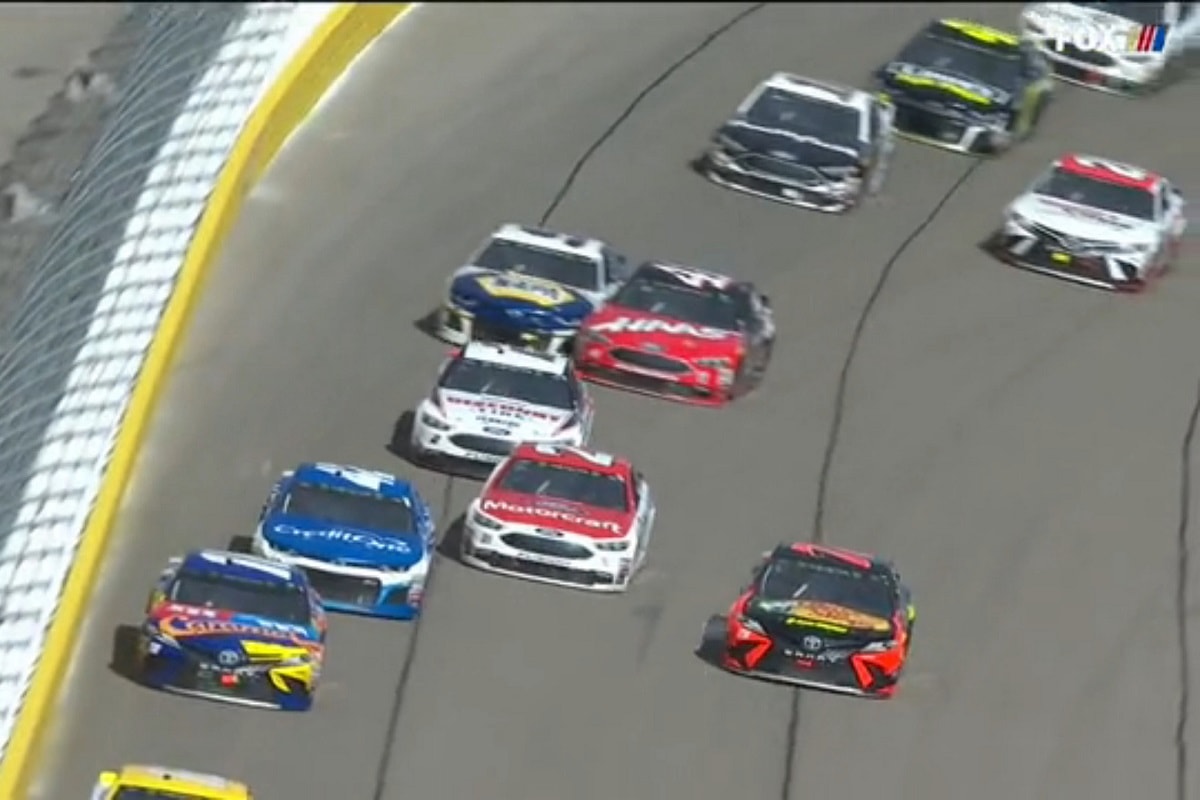 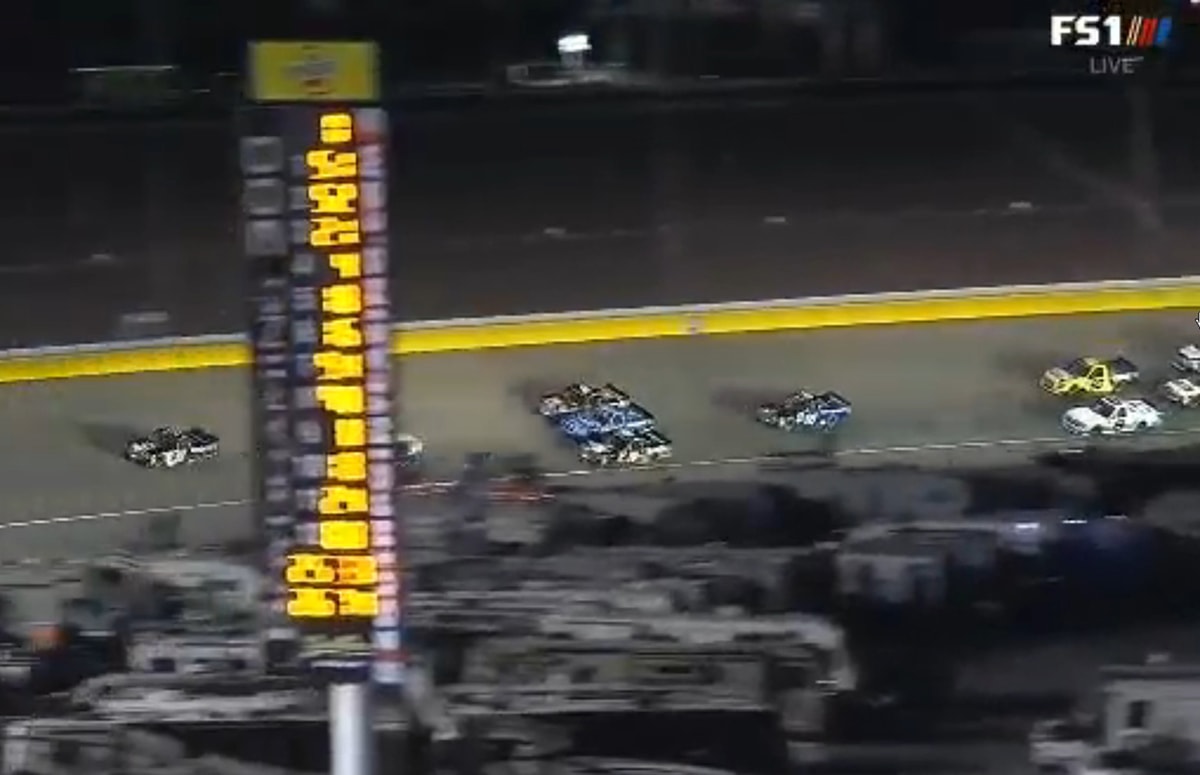 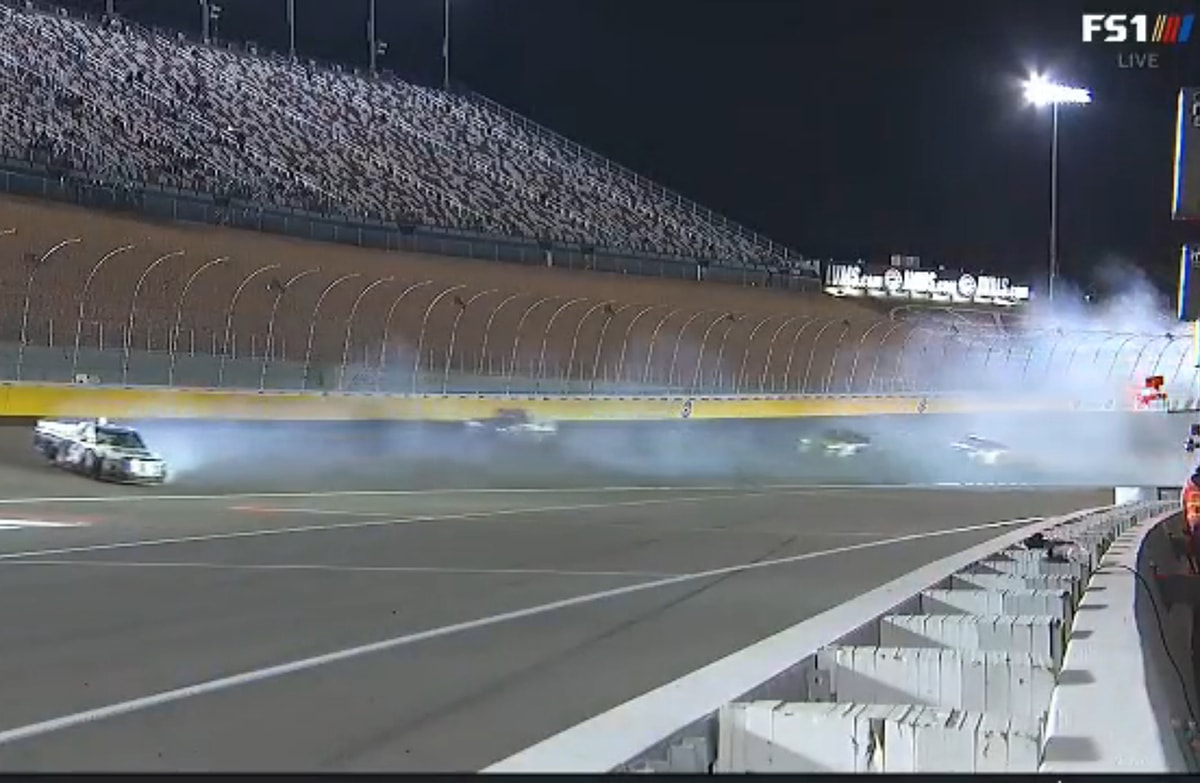 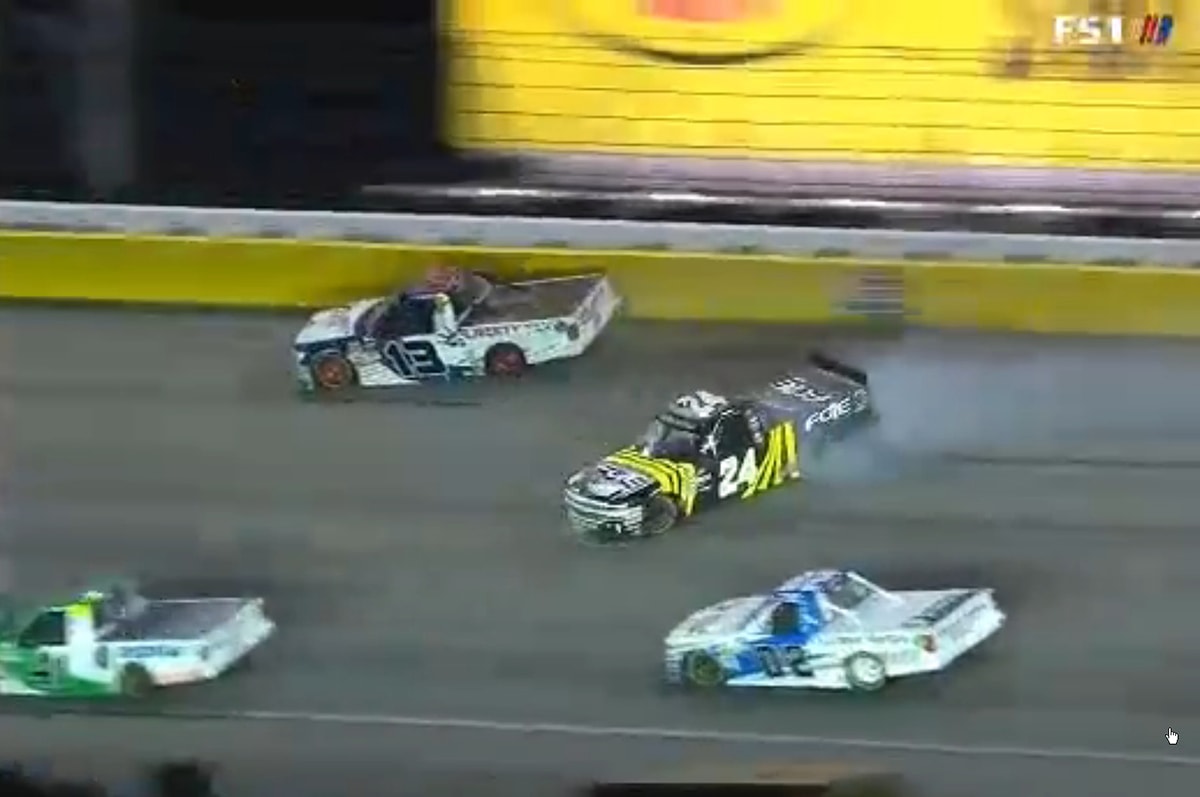 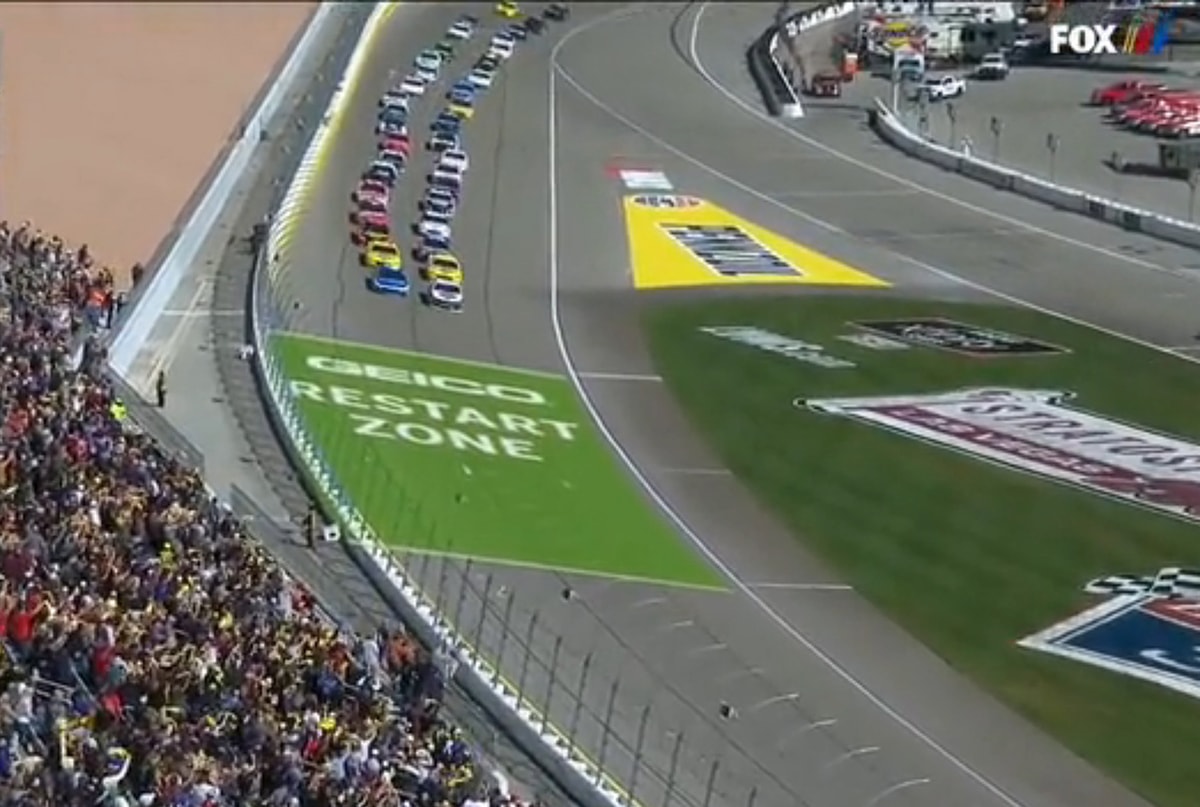 All images from screen captures.

Last week’s races at Atlanta were described by many fans as a “snoozefest.” NASCAR’s top drivers redeemed themselves this weekend at Las Vegas Motor Speedway by gambling heavy and hard, going two, three and four wide, trading paint, getting donuts and giving fans a set of great races to enjoy. Kyle Busch won his first Camping World Truck race at Las Vegas on Friday. Although Kyle Larson had a dominating performance in the XFINITY Series race on Saturday, the drivers still put on a show that entertained. Kevin Harvick put everyone in the stands and at home to sleep with his dominating performance in the Cup race.
It’s hard to believe with the success he’s had all over NASCAR that Kyle Busch had never won a truck race at the Las Vegas Motor Speedway, but it’s true. One of NASCAR’s most successful drivers had never won at his home track before. Rowdy turned in a stellar performance to take the win. Truck regular Noah Gragson, in his Number 18 Kyle Busch MotorsportsToyota Tundra, took the first stage win and Stewart Friesen, in the Halmar Friesen Racing Number 52 Chevy Silverado, won the second stage - his second stage win since Eldora in 2017. The racing throughout the pack kept viewers on the edges of their seats for most of the race.
Saturday’s XFINITY Race at Las Vegas Motor Speedway could have been called “the Kyle and Christopher show.” Everybody else in the field put on a great race as well, but these two were trading positions, jockeying for position with each other and just having fun to the point where they stole the show. Christopher Bell took his Number 20 Joe Gibbs Racing Toyota Camry to the Stage 1 win, while Kyle Larson took his Number 42 Chip Ganassi Racing Chevy Camaro to second, and Tyler Reddick’s Number 9 Junior Motorsports Camaro was third.
Things settled down somewhat during the second stage, and all three Gibbs Toyotas experienced problems in the pits after Stage 1. Stage 2 was pretty much the Kyle Larson show, with him winning the stage going away. Ryan Blaney, in the Penske Racing Number 22 Ford, and Larson made plans for a play date and carried on a battle for the lead for a few laps. Larson jumped back to the lead after a late race caution and never looked back.

Larson won the race handily, while Bell did an admirable job of recovering from pit problems to take second. Justin Allgaier did JRM fans proud by taking his Number 7 Chevy to a third place finish. Ryan Reid had a good showing in his Number 16 Roush-Fenway Ford, tapping the wall and using those body modifications to help him pass a number of cars to get him into the top ten until he started having problems with his right front.
Drivers put on an awesome show at Daytona a few weeks ago, but then they made viewers somnolent at Atlanta. Fans received another dose of Lunesta just prior to Sunday’s Cup race, forcing them to slap themselves to stay awake during the race. Harvick put on a clinic and the rest of the pack appeared to almost be asleep or on autopilot throughout the race. Again, the most exciting things that can be said about the Vegas Cup race was that Harvick swept all three stages, Larson swept third place and a couple other drivers got into the action with second place postings.
As mentioned, Kevin Harvick took his Number 4 Stewart-Haas Racing Ford to the race win as well as both stage wins. Martin Truex Jr. drove his Furniture Row RacingNumber 78 to a second place finish in stage 1, while Ryan Blaney motored the Number 12 Penske Racing Ford to second in stage 2. Kyle Busch inserted his Number 18 Joe Gibbs Racing Toyota Camry into the fray to take home second place honors.
At the end of the race, there were only nine cars left on the lead lap: five Fords, three Toyotas and Larson’s Chevy. Everyone else was put laps down either due to a lack of speed, pit problems or being involved in one of the few wrecks that occurred. Another small bit of excitement that the race delivered was the fact that Harvick led the most laps at Las Vegas that turned into a race win, with 215 laps led. Jeff Gordon holds the record for laps led at the track with 219, but he ended up third in that race.

Kurt Busch and Chase Elliot both had great races going until lap 84, when Kurt Busch got wicked loose under Elliot and ended up taking both cars out of the race. After exiting the infield care center, Busch was quoted as saying, “It just stepped out on me. It’s ridiculous.” NASCAR heads to Phoenix next week, another track Harvick is expected to dominate.
Back to Post
About Mike Aguilar 388 Articles
Mike's love of cars began in the early 1970's when his father started taking him to his Chevron service station. He's done pretty much everything in the automotive aftermarket from gas station island attendant, parts counter, mechanic, and new and used sales. Mike also has experience in the amateur ranks of many of racing's sanctioning bodies.