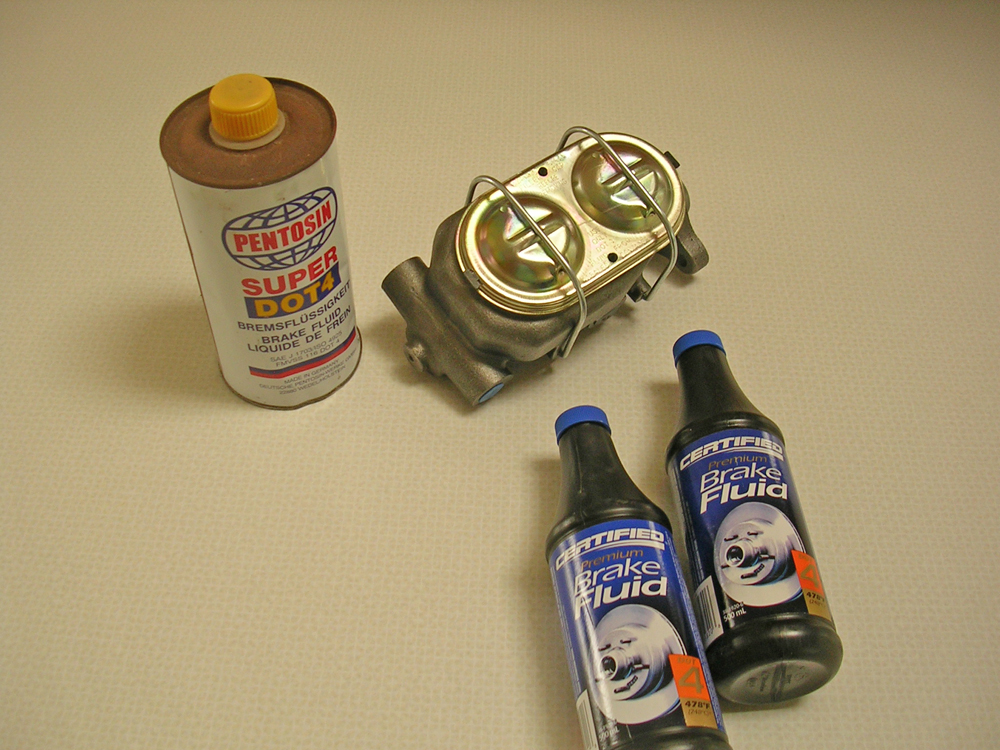 Want to open a can of worms with racers?  Engage in a debate on brake fluid.  What?  Brake fluid is brake fluid.  Right?  Not exactly.  Over the past several years, there have been many advances made in brake fluid — not the least of which are the silicone-based fluids.  Unfortunately the fluid situation isn’t as simple as swapping one type of fluid for another.

For some time, the Department of Transportation (DOT) has issued a set of stringent specifications for brake fluid types.  The more common glycol-based or “conventional” fluids fall under DOT 3 and DOT 4 specifications.  DOT 3 has a minimum dry boiling point of 401 degrees F while DOT 4 has a minimum dry boiling point of 446 degrees F.  On the other hand, silicone fluids fall under DOT 5, which has a dry boiling point of 500 degrees F minimum.  In a typical drag race car, the conventional fluid boiling point diminishes with time.  How long does it take for this to happen?  I can’t locate statistics for a drag race vehicle, but in most passenger cars that are operated under damp conditions there can be a rapid deterioration of the brake fluid boiling point in as little as six months.  Obviously, drag cars aren’t used in the rain, but it does go to show that brake fluid definitely is effected by time and weather.  That’s why some drag race brake manufacturers recommend you flush the system with fresh fluid on a regular basis (as an example, some road racers change fluid after each event!).

So what’s the big deal in regard to brake fluid boiling points?  In reality, one of the most critical factors in regard to a hydraulic brake system is the dry and wet boiling points.  If the fluid boils, small gas bubbles occur.  These bubbles don’t disappear.  Instead, they’re trapped in the system.  Since gas bubbles are compressible, then the brake pedal becomes spongy.

Generally speaking, a street driven passenger car is further plagued by wet boiling points.  Normally, the brake system will function with a percentage of moisture in the system.  Over time, this moisture content increases and as a result, brake performance decreases.  That’s why “wet boiling point” specifications are also provided by the Department of Transportation.  These “wet boiling points” are outlined as follows (keep in mind all are minimums!).

DOT 5.1 is a wee bit confusing. While DOT 5 is synthetic based, DOT 5.1 is pretty much a lighter viscosity synthetic poly glycol fluid with DOT 4 performance parameters. It was developed for use in mechanical ABS systems that require a higher cyclic rate capability.

Further to the decrease in brake efficiency when the fluid is intermixed with moisture, a number of internal brake components can be attacked by the water found in the system.  Things like disc brake pistons can corrode beyond repair, which in turn can create both a dangerous situation and an expensive repair bill.  On a similar note, it’s always a good idea to use the brand of brake fluid in the system (or the brand you’re planning to use) as a lubricant when assembling brake calipers and assorted brake components.

So why don’t the OEM manufacturer’s make the big switch to silicone-based brake fluids?  Silicone brake fluids have some admirable qualities:  They don’t absorb moisture and they don’t harm paint finishes if spilled.  Unfortunately they aren’t perfect.  One problem is slight compressibility under high temperatures.  If the brake system is exposed to very high temperatures, the silicone fluid can compress slightly with the end result being a spongy pedal.  In addition, silicone fluid is affected by atmospheric pressure.  When a silicone brake fluid-equipped vehicle is driven in high altitude conditions, the fluid can expand significantly — again contributing to a spongy pedal.  Further to this, many of the rubber components used in brake systems are manufactured from “ethylene propylene rubber”.  Some silicone fluids are not compatible with the “EPR” – causing them to expand.

So what’s the answer?  Always use a brake fluid that is recommended by the brake manufacturer (or if you use OEM parts on your race car, by the motor vehicle manufacturer).  Never mix brake fluid brands or types and make every effort possible to keep contaminants out of the brake fluid (as well as the brake system).  Once the protective seal is broken on a can of brake fluid, use it immediately.  Never re-use brake fluid which has been bled from a system.  It’s a disposable item.  Silicone brake fluid can be used in cars that are driven very little (i.e.:  collector cars, antiques, “stretcher queens”).  Finally, to maintain the health of your system, try flushing out the old glycol fluid in your race car braking system on a regular basis — replacing it with fresh DOT 3 or DOT 4 fluid (or possibly DOT 5.1).  By the way, the DOT specs are the bare minimum specifications.  As a result, the DOT 5 fluids do not provide the highest boiling points available. There are no DOT 5.1 brake fluids that exceed the dry and wet boiling points of the best of currently available DOT 4 racing brake fluid formulas (some “super DOT 4” racing brake fluids have wet boiling points well over 400-degrees F). They do meet the lower viscosity specifications, however. Use the good stuff and stay away from silicone.  Your brake pedal will be much happier.

3 Comments on Brake Fluid and a Silicone Future