It’s true that every dog has its day, but not every dog is as fortunate in choosing a two-legged partner in life as Jack Russell terrier Norman Pagenaud, who has been by Team Penske racer Simon Pagenaud since they chose one another.

Through Pagenaud’s long victory drought, Norman was there, so of course when his partner managed to sweep the month of May at Indianapolis Motor Speedway, winning both the Grand Prix on IMS’ road course and the 103rd Indianapolis 500 pole and race, there was Norman in Victory Lane. He was there vocally as well as physically, barking in joy when Pagenaud became the first Frenchman in, well, a dog’s age to win The Greatest Spectacle in Racing.

It’s thereby appropriate that Norman Pagenaud find his way to the Baby Borg trophy given to both the winner of each year’s Indianapolis 500 and to the team owner. It may be Simon and Norman’s first Baby Borg, but this year also marked team owner Roger Penske’s 18th such trophy, making him – by a large margin – the most successful team owner in track history.

Both driver and team owner received their commemorative trophies on September 9th at Team Penske headquarters in Mooresville, N.C. Simon Pagenaud was visibly stunned when he saw the miniature replica of the BorgWarner trophy with both him and Norman sculpted at the base.

“It’s a funny surprise because I didn’t expect that at all,” Simon Pagenaud said. “It just shows the impact that having Norman next to me has on the industry of racing. I’m glad to see that my dog is becoming immortal, so that is pretty cool. That moment in Victory Lane after winning the Indianapolis 500 when he was there will always be a moment (fiancee) Hailey (McDermott) and I remember our whole lives. It will be the best moment of our life until we have kids together,” he said. “This will always be our little family at that time.”

Norman Pagenaud’s appearance as part of his partner’s Indy 500 victory was an anomaly. It’s one of the few times in history that a dog has been with the winning driver after securing the checkered flags in the biggest race in the world. It’s also the first time a Team Penske driver has celebrated the win with a pet.

For Roger Penske, whose record-extending 18th victory in the Memorial Day classic marks 13 more Baby Borgs than the next-closest winning owner Michael Andretti, “Seventeen times I never saw a dog in the winner’s circle,” Penske remarked. “For the 18th time, we should recognize that. Will Behrends, the sculptor of the Borg-Warner trophy, was motivated to make this extra special dog face for Simon as we went forward.

As will Norman. In honor of this special occasion, BorgWarner made a $20,000 donation – in Simon Pagenaud’s name to recognize his Indy 500 victory – to IndyHumane, the Humane Society of Indianapolis, to help shelter dogs and help families adopt those dogs.

This auspicious occasion came on the same day that longtime Team Penske team leaders and executives Don Miller and Dan Luginbuhl joined the Team Penske Hall of Fame. Miller, former Penske Racing South president, and Luginbuhl, a pioneer in motorsports marketing and public relations, were honored in a special ceremony during the festivities.

Luginbuhl joined Team Penske in 1969 and charted the course for the team’s innovative and masterfully successful partnership model, pioneering modern motorsports public relations and marketing along the way. He served as the team’s vice president of communications through to his 2002 retirement, and continues to be a valued resource for all facets of Team Penske’s endeavors throughout its NASCAR, INDYCAR and IMSA competitions.

Monday’s induction marked the fourth such for Team Penske’s Hall of Fame. Miller and Luginbuhl join 2016 inductees Roger Penske and Mark Donohue, Rick Mears and Karl Kainhoifer in the class of 2017 and last year’s honorees, Rusty Wallace and Walt Czarnecki. 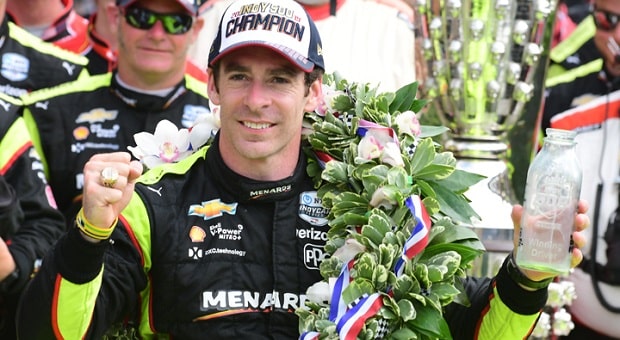