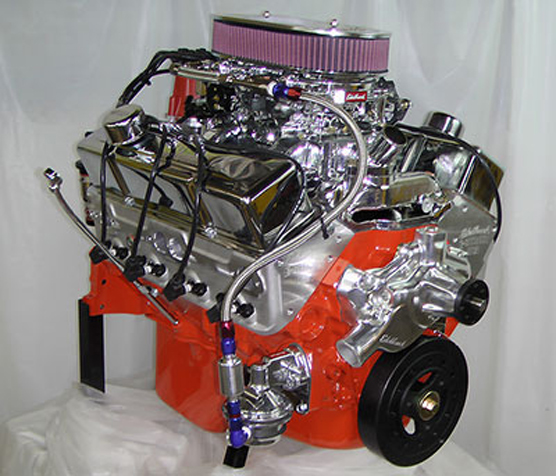 Fans of Chevrolet’s venerable small-block are the luckiest people in the realm of automotive performance. There is no other engine—regardless of manufacturer, that has such a myriad of choices when it comes to performance parts. There have literally been millions of small blocks built since 1955, and almost immediately, the aftermarket was busting at the seams to supply performance parts to make them perform even better.

While there are many that will not concede to the bigger-is-better mantra, and still feel that the 327 and even the 305 engines are the greatest. It is really hard to doubt their greatness, just look back at history. When they were popular, they were great engines. But when it comes to performance and racing, cubic inches are hard to beat. For that reason, we will focus ourselves on the 350 and 400 small blocks.

In 1967, the Camaro received the first 350 small-block V-8. Eventually, the engine would find a place in passenger cars and trucks—sometimes in a very lacking level of output. The 350 was based on the 327 block, but it had an all-new crankshaft with a 3.48-inch stroke. Initially, it produced a whopping 295 horsepower and 380 lb/ft of torque. The 350’s power levels fluctuated during the 1970s, and at its lowest point, it was rated at a mere 145 horsepower.

The largest version of the First Generation small-block was the 400 that debuted in 1970. It featured a Siamese bore for greater block-strength. Early models produced 265 horsepower with a two-barrel carburetor, and in 1974, a four-barrel version became available. At the peak of its emission-choked output, it only produced 145 horsepower. Since we’re sure that you are continuously looking for more power, we decided to give you guys a multipart article about choosing the right parts, and tuning your small block to make the most power.

In this installment, we will focus on the intake manifold. There are two thoughts when it comes to intake usage, a single plane is for racing, and a dual plane is for street use. But, do you know the reasoning behind this logic? A dual-plane manifold has two separate plenums that each feed four cylinders, while a single plane manifold has a single, open plenum, and feeds all eight cylinders. Within a V-8 engine, the induction cycle of each cylinder is long enough that its combustion process will overlap the next cylinder in the firing order. If using a single-plane intake, each cylinder is able to pull fuel and air from all four carburetor venturi. Since the single plane’s plenum is open, this air and fuel mixture is continuously changing direction. This is because when the demand for air and fuel is acknowledged from the next cylinder in the firing order, the draw on the mixture “moves” to that cylinder. Because of this, back-pressure pulses are able to invade the plenum, and this generates turbulence. This turbulence is called reversion, and may have a small, adverse affect on the carburetor’s fuel metering.

But, this turbulence can actually help keep the fuel molecules suspended in the tumbling air as it enters the combustion chamber. But, this overlap can cause problems at part throttle, especially with a camshaft that is larger than stock. If using a larger-than-stock camshaft, when another cylinder in the overlap phase opens, pulling air from the common plenum, this can actually result in exhaust gasses entering the cylinder. This results in an engine that runs rough at low rpm. A dual-plane intake separates the manifold’s plenum into two sections. With a dual-plane intake, each plenum and four intake runners are connect to every other cylinder in relationship to the engine’s firing order. Because of this, each side of the manifold is only subjected to pulses from every other cylinder in the firing order. So, while a single-plane manifold has overlapping pulses every 90-degrees of crankshaft rotation, the dual-plane manifold only sees an induction pulse every 180 degrees of crankshaft rotation.

So which intake is right for you? Before you can answer that question, you will need to consider things like the operating rpm-range of your engine, and the rest of the pieces that are actually in your engine. Let’s take a “for instance” that you want to change the intake manifold of an existing engine combination. The first thing you need to do is to be honest about what your engine will be doing. All intakes have a published rpm range that identifies where they are most efficient. These might be suggestions to some people, but in all honesty, these numbers are based on information that is collected from an unbelievable amount of testing.

If you keep the intake manifold’s advertised operating range close to the camshaft’s advertised operating range, this will help get the best performance from your engine. Everyone gets the shock and awe of a tunnel ram, but many times, it’s not practical, and it rarely helps performance. Since all intakes use an advertised rpm range, this must be considered, and is the easiest guide to choosing the right intake for you. Most street cars work best with a dual plane intake, because most have an advertised range of idle to 6,000 rpm. Since a race car spends most of its time in the upper rpm range it will require an intake that has a range that reflects that situation (i.e. 3,500 – 8,000 rpm). Next, since the intake and camshaft both have an advertised rpm range, both ranges should be similar or at least very close. A low rpm difference of approximately 500 rpm is acceptable, but the difference should never exceed 1,000 rpm.

Some Basics: Dual-plane intake manifolds typically have longer intake runners, making them ideal for low and mid-range power. We recommend choosing a dual-plane manifold for: Engines operating in the 1,500-6,500 rpm range. They are a good street performance and mild racing intake. Single-plane intakes usually have shorter, straighter runners, so they are able to move air from the carburetor to the combustion chamber. For that reason, a single-plane intake is perfect for: Engines operating in the high-rpm range through approximately 3,500 – 8,000 rpm. 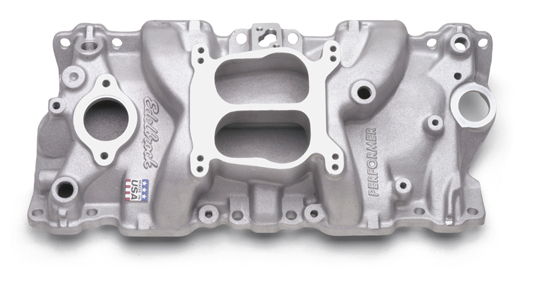 Edelbrock’s Performer intake (PN 2104), is designed for use on 1986 and earlier 262-400 Chevys. This manifold has a runner design that’s “tuned” for peak torque starting at 3,500 rpm on a 350-inch engine, and is an ideal power producer from idle to 5,500 rpm. A dual-plane intake improves low-rpm response, torque production, and idle quality. The intake runner’s length plays a crucial part in taking advantage of the natural pressure-wave pulses in the intake runner. This provides a greater charge density in the cylinder, and therefore more torque and horsepower. As a general rule, longer runners are more at home at a lower rpm range, while shorter runners favor the upper end of the rpm band. 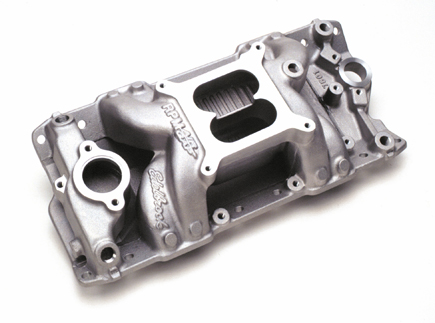 This Air-Gap dual-plane intake (PN 7501) is designed for 262-400 V8’s. The RPM Air-Gap features an open air space that separates the runners from the hot engine oil. This results in a cooler, denser air/fuel charge to make more power. This intake accepts all 1976 and later alternator and A/C brackets if you use it on your street car. Not for use with 1987 and newer cast-iron heads. This is a great intake for engines running in the 1,500 – 6,500 rpm range. 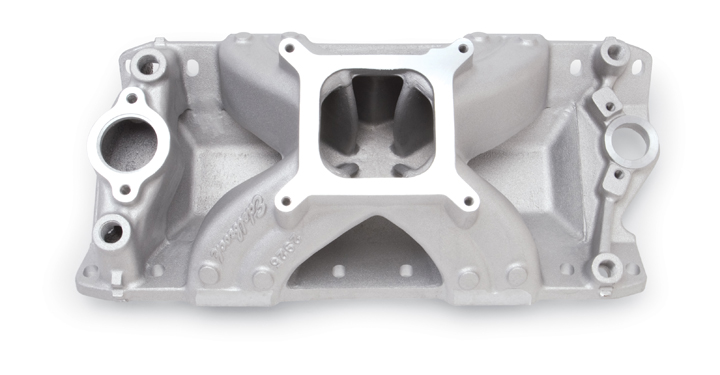 The Victor Jr. manifold (PN 2975), is a versatile single-plane manifold that is excellent for many applications from high-performance street to drag racing. The Victor Jr. provides maximum performance for engines with standard port location, using either iron or aluminum cylinder heads. The low-profile of the (PN 2975) works well in applications with minimal hood clearance. This is a great performing intake for engines operating in the 3,500 – 8,000 rpm range. 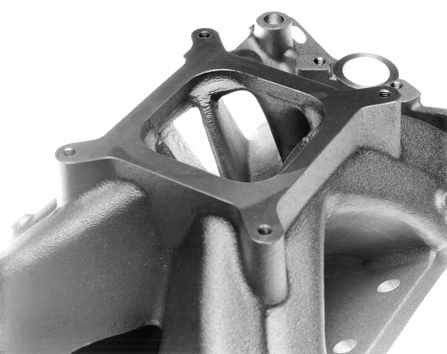 The open-plenum design of a single plane is more suited to upper rpm power production. This is because a smaller plenum found in a dual plane intake, favors power production at a lower rpm range, while larger plenums are more inclined to boost the top-end power. With an open plenum and short, direct runners sending the mixture of fuel and air from the carburetor to the intake ports, the single-plane intake is the undisputed champion in regards to airflow. High rpm, high flow, and high-demand situations are where the engine can really use a single plane. 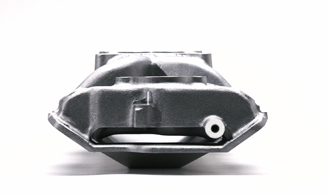 Edelbrock pioneered the Air-Gap design, which features an open-air space that separates the plenum and intake runners from the hot engine oil that splashes up around the lifter valley, resulting in a cooler, denser charge for more power.