While some may have been celebrating the start of race season with the Daytona 500, what has been the truest test of will and talent thus far this season? Overcoming one of the most challenging motorsports events of the entire racing season – the Rolex 24 at Daytona. We slid Behind The Wheel recently with one of the winning members of the 2016 team – Kenton Koch.

This 21-year-old Mazda Road to 24 competitor began his love for racing at a very young age. “Ever since I was very little everything with four wheels interested me,” said Koch. “My Hot Wheels® collection was gargantuan and my parents even had to stop buying me the ones with the rubber wheels because I would always put skid marks in the tub – as if I was racing on the banks of Daytona.” 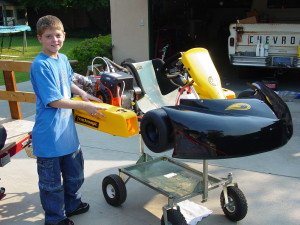 After a trip to a Los Angeles Auto Show with his father, Koch eyed his first opportunity to get behind the wheel. “My father and I saw a go-kart in the expo center, but I was not quite old enough to start competing then,” said Koch. “While I am sure that my dad, who was once a desert car weekend warrior, thought that I would forget about this idea, the day I turned 8-years-old I asked him if we could get a kart.”

By the time Christmas time rolled around that year, Koch would begin to see his future unfold before him. “Before you know it my dad was spending his time assisting me in my first motorsports competition at Adams Motorsports Park in Riverside, CA,” said Koch.

Unlike many oval asphalt tracks, this 3/4 of a mile, road course 14-turn paved karting race circuit in Southern California has become one of America’s Most Historical Kart Tracks. In fact, according to a May 2005 National Kart News Magazine article, Adams is to kart competition what Indianapolis Motor Speedway or Le Mans is to open wheel automobile drivers.

“Although this track is where I actually found my love for not only racing, but competing on road courses, it is amazing to know that it led me to where I am today,” said Koch.

After several successful years of kart racing, Koch had the opportunity to compete in the Skip Barber Karting Shootout at the age of 16-years-old. “From this race, I was able to win some scholarship money as well as an opportunity to move up to the MX-5 Series.” Within a year, in 2012, Koch had already picked up his first championship, which furthered this talented wheelman’s opportunity for additional career advancement scholarship money. 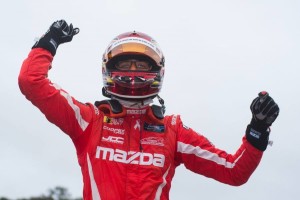 “This championship led to enough funds to compete in my first national series – the Skip Barber Mazda Speed Pro Challenge the following year,” said Koch. “The amazing part was I won back to back championships, which led to another move in my career to the Global Mazda MX5 Cup Series.”

Yet another championship was found in this series, which led to Koch jumping into his first Mazda Open Wheel IMSA Prototype Lite. 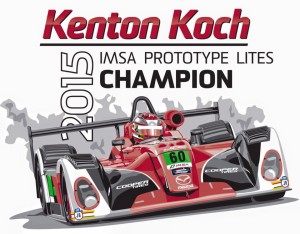 Although this was a first of its kind for this born-to-be open road competitor, Koch followed up his new start by winning yet another championship. “This is how I earned the opportunity to join this year’s Rolex 24 team,” said Koch.

With this ongoing streak of success it is only natural to venture to guess that Koch would once again wind up in the winner’s circle?

That is just the case as Koch used his obvious natural talent to help pull off an amazing first time win for the JDC/Miller Motorsports Team, in the LMPC class, of the Rolex 24 recently.

“The best part is knowing that I overcame some mistakes that I made, including a crash after leading this race, to become the fastest of our JDC/Miller Motorsports Team,” said Koch. 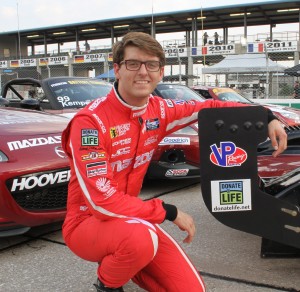 Despite mishaps that Koch experienced during his race, his ongoing experience and confidence seems to be continuing to fuel the fire for this talented driver.

“It’s pretty unbelievable to think that just three years ago I stopped in a Rolex store, gazed at a Rolex watch, tried it on and remember hoping that one day I would have the opportunity to win one,” said Koch. “Now, the dream has come true! I still cannot believe I am lucky enough to be wearing this today and I plan on wearing it the rest of my life along with this smile on my face.”

So what is next for this now 21-year-old driver? “I just hope to follow the lead of some of my heroes like past IndyCar star Justin Wilson, who also used his talent to support the same cause that I do, Donate Life,” said Koch. “I even hope to help carry this cause back into this league someday.”

As Koch prepares for his next task at hand, which is racing in the 12 hours of Sebring at Sebring International Raceway (March 16-19, 2016), we at RacingJunk.com wish him all the luck in both this as well as all of his future endeavors.