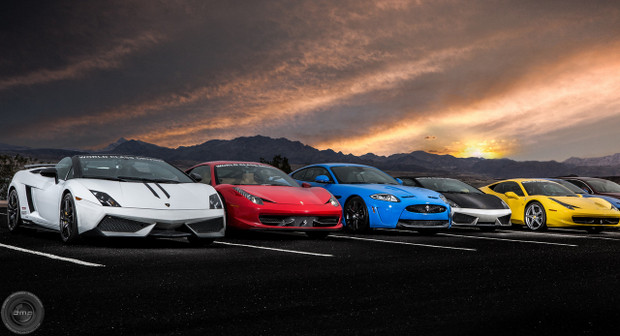 It’s an age-old question: what’s better, the less-refined, big-horsepower muscle cars from Detroit or the highly-engineered, delicate exotics from Italy? It’s a tough question to answer definitively, especially since there’s very little cross-over between exotic and muscle car owners, but I had an opportunity to come up with my own answer during the 2013 SEMA show in Las Vegas.

After tearing up the roads with some of America’s best muscle cars (go HERE to read about the ultimate muscle car experience), I continued my dream-come-true day with World Class Driving’s Exotic Experience, piloting a Ferrari 458 Italia and a Lamborghini Gallardo LP570-4 Spyder Performante. My friend and automotive photographer, John Afravi, joined me again to document the adventure. 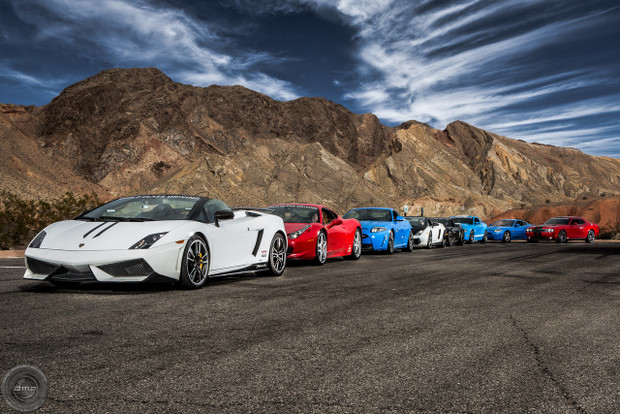 The Exotic Experience was similar to the Muscle XL Experience, with instructors taking us single file through the streets of Nevada then into scenic Lake Mead National Park. Drivers rotated through the cars at predetermined stops along the 30 mile route, allowing them the rare chance to compare these very different machines. With the average price for the Italian duo a lofty $230,000, one would assume that each car came with a nanny in the passenger seat, but much to my surprise, drivers were left to their own devices in a car worth more than most peoples’ homes. 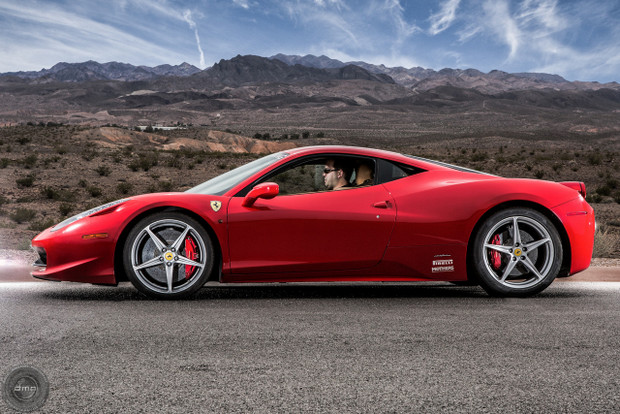 My first car for the tour was the famous Prancing Horse, a red Ferrari 458 Italia with a tan interior. Drama is the theme of the 458. From its sexy and functional curves to its deafening exhaust note, this car doesn’t do subtle. Everything about it screams, “I have arrived!”

Driving the 458 was easy, with an option to cruise in automatic mode or manually going through the gears using paddle shifters. Opting for the manual mode, I made my way onto the highway via a curved, declining on-ramp, but my eagerness coupled with a heavy right foot caused the cold tires to lose traction, sliding the rear end out from underneath me. It happened in a controlled and unassuming manner though, as the traction control gently straightened the car out. As dramatic as the 458 is, it’s been engineered to keep the actual driving aspect civilized. Had I done the same thing in a Shelby Mustang, I’m certain I would have ended up on the highway’s retaining wall.

When the roads opened up, so did the Ferrari’s 562 HP V8; its exhaust note high-pitched and distinctly European. The power delivery was endless, with the torque never letting up as the engine revved to 9,000 rpm. Pulling the right paddle shifter resulted in a quick thump from behind, signifying the dual-clutch transmission had grabbed the next gear. It was the quickest gear change that I’ve ever experienced in a car. For comparison, the Corvette Z06 and the Shelby Mustang both come with a 6-speed manual transmission, and even the most experienced race driver can’t operate a gated shifter faster than the 0.4 seconds it takes for the Ferrari to change gears.

Overall, the 458 Italia is a very competent machine, bred from years of racing experience and technology. It handled the roads with confidence and precision, but because the car is hand-built, mechanical problems are always lurking around the corner. 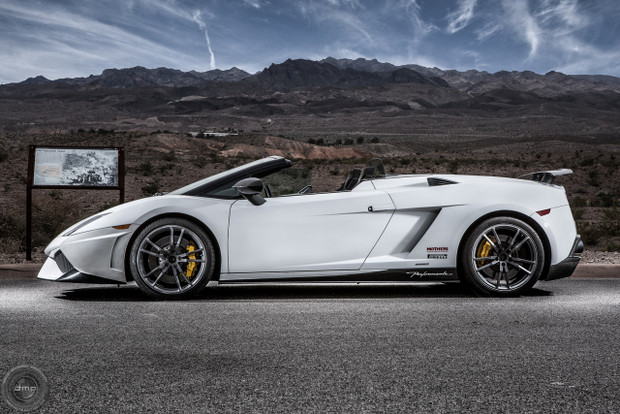 For the next part of the tour, I wrangled the Raging Bull, a Lamborghini Gallardo LP570-4 Spyder Performante. This car is equally dramatic, but it’s drama unfiltered. It has all of the go-fast parts of the Ferrari–a 570 HP V10 with an 8,000 rpm redline, carbon-ceramic brakes and sequential transmission–without the idiot-proofness. It left me with little more than my common sense and driving skills to keep things in check.

The space between gears in the Gallardo felt infinite, leaving enough time for my body to dive forward before being slammed violently back into the seat. The difference was so drastic between the two vehicles that one driver insisted that something was wrong with the Lamborghini, causing the the entire group to pull over for a false alarm.

Cruising in the Gallardo definitely required more work than the Ferrari, due to heavy steering and even heavier pedals. It felt like an untamed beast with too much power for its own good. That being said, it was still fun to drive, and reminded me of the Shelby Mustang with its brutish demeanor.

Once again, World Class Driving went above and beyond my expectations by creating one of the most exciting and rewarding driving adventures I’ve ever had. Their Exotic Experience is the perfect way to get an introduction to the world of Italian supercars and should be on every car lover’s bucket list.

As for which is better, American muscle or Italian exotics, there’s no all-encompassing answer. The muscle cars are loud, fast and fun, and the exotics are excessive, opulent head-turners. There are plenty of arguments for and against both types of cars, but in the end, it comes down to personal preference. If I had my way, I’d take them all because a fast car is a fast car. And I love fast cars.

Go HERE to schedule your own comparison with World Class Driving.