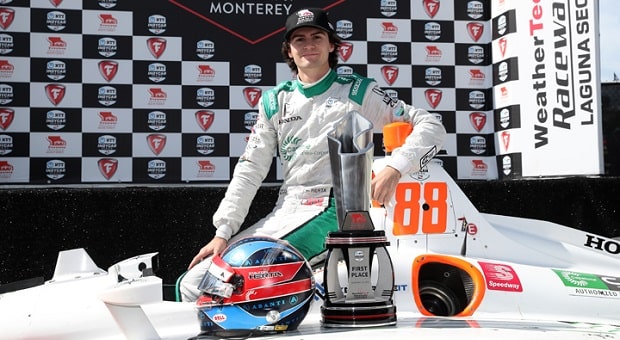 Herta, whose father Bryan owns three consecutive pole positions and a couple of Indy car victories at this vaunted track (where Bryan Herta also lost a 1996 Indy car race to “The Pass” performed by Alex Zanardi in the Corkscrew turn), earned pole position on Saturday, led 83 laps of the 90-lap contest and celebrated in Victory Lane with his Harding Steinbrenner Racing team. It was the second win of the season for Colton Herta, who also won on the series’ first visit to Circuit of the Americas earlier in the 17-race campaign.

Herta’s victory wasn’t enough to gain him INDYCAR’s Rookie of the Year award. That went to Chip Ganassi Racing’s Felix Rosenqvist, who amassed five more points than Herta (425-420) due to his consistency throughout the year. Rookie standings are determined by overall results. As it was, the pair of first-time competitors – in a very stacked rookie field that also included Santino Ferrucci and Marcus Ericsson – earned sixth and seventh places in the overall standings once the Sunday afternoon race was complete.

There had been many who thought INDYCAR’s return to Laguna Seca after a 15-year absence would never result in an entertaining race. Many of those were journalists who thought the track was too short, not wide enough for the Indy cars and too far from the series’ midwestern roots. They were wrong, as fans came to watch, to camp and to meet their favorite drivers and teams, and the atmosphere throughout the weekend was one of unbridled excitement and festivity.

The lead only changed hands in this race eight times during pit stop exchanges – most everyone stopped three times for tires and fuel – but the competition behind top finishers Herta, Will Power, Dixon, Pagenaud, Rosenqvist and Rossi along with the balance of the 24-car field made this a truly entertaining race.

Sebastien Bourdais, the four-time INDYCAR champion, came from 19th on the grid to finish seventh, passing cars left and right as he sliced his way through the field. After a poor first pit stop, Andretti Autosport’s Ryan Hunter-Reay fell to last and persevered to finish in tenth place after starting ninth. A qualifying penalty had Rosenqvist starting 14th, but the Swede barreled through the pack to take fifth at the checkered flags.

There was a single caution period of three laps at mid-race, when Conor Daly spun in the second turn while trying to move forward. This after Santino Ferrucci made contact with Takuma Sato, forcing the Connecticut racer to retire and lose valuable points in the rookie standings. The latter driver, Sato signed a contract extension with Rahal Letterman Lanigan Racing (RLLR) that will see the Japanese ace return to partner with Graham Rahal next season. 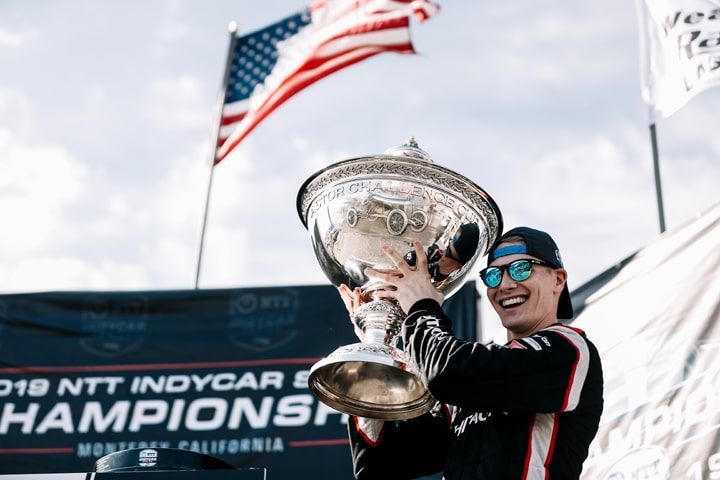 Newgarden last took the title with Team Penske in 2017, but this year worked with new engineer Gavin Ward when Brian Campe elected to be shop-based. With the Laguna Seca race offering double points, there was a lot on the line for the four eligible drivers: Newgarden, Rossi, Pagenaud and Dixon. That all four qualified in the Firestone Fast Six made the excitement level increase four-fold.

“It feels more special,” said Newgarden after tearfully climbing from his car and embracing his crew. “It really hit me. It just really, really hit me on the in-lap. Opportunities come every single week” during the racing season, “but to win a championship, it doesn’t come every week,” he said.

The final standings saw Newgarden as the championship victor, a fighting Pagenaud – whose battle with Dixon was truly classic – in second place, Rossi relegated to third after making the wrong tire choices pre-race on a classically sunny day that went from nearly hot at the green flags to pleasant from mid-race to the close and Dixon in fourth, despite his podium result behind Herta and Will Power.

Herta, the youngest winner in IndyCar history, had to defend his front-running position for much of the full 90 laps. While not gaining the Rookie award, the second-generation INDYCAR racer earned two victories and three pole positions over his first full year of INDYCAR competition. “I’m really proud of what I did this year and what the team has been able to do and given me the car to do,” he said.

After taking some time off to personally examine his season, Herta intends to look “into focal points of what I lacked and, for sure I’d say, going into the off-season it was going to be mostly about tire wear and maintaining the [Firestone] tires. I think I did that very well today and most of the time I was doing it better than the other guys. I think now I can kind of focus on other things,” Herta said. 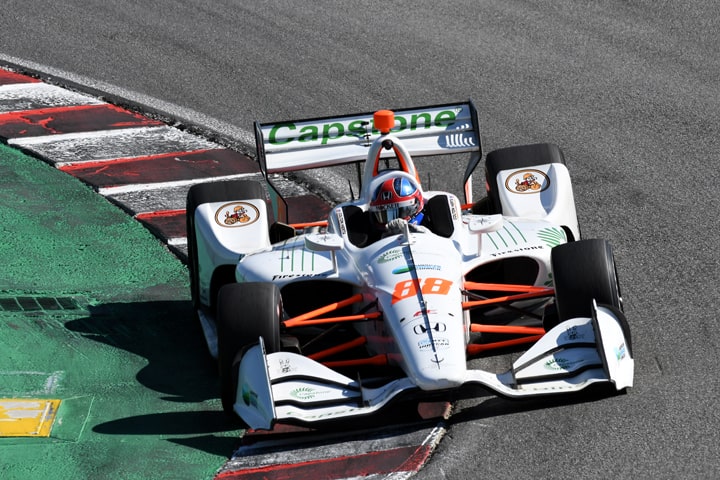