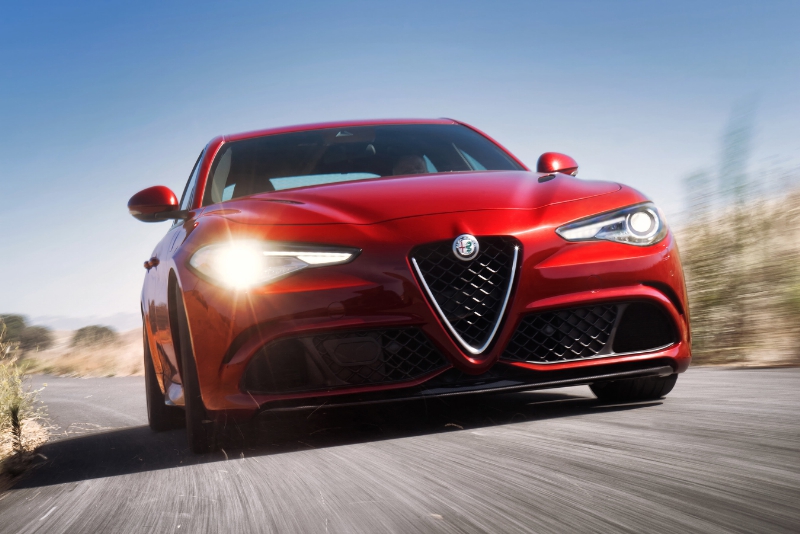 Alfa-Romeo will be returning to United States markets in 2017 with the new Giulia Quadrifoglio.  Alfa Romeo was originally imported to the United States in 1961, and in 1995, the exporting of cars to the country ceased.  The last model sold in the U.S. was the 164.

In 1986, Fiat adopted Alfa as one if it’s subsidiaries. There have been conversations happening since around 2008 about speculation of Alfa Romeo coming back to North America, and those rumors have finally proved to be true.

The 2017 Alfa Romeo Giulia Quadrifoglio was built in Italy and is the fastest ever four-door production sedan with 505 hp, 0-60 in 3.8 seconds, and a record-setting Nurburgring lap time of 7:39.

The top speed of the Giulia Quadrifoglio is 191 mph, and cylinder deactivation reduces real-world fuel consumption by up to 15 percent.  It features nearly perfect 50/50 weight distribution, segment-leading torsional rigidity, and the most direct steering available.

“The all-new Giulia is not just a new car, but an entirely new benchmark that represents the next chapter in Alfa Romeo’s rich 105-year heritage,” said Reid Bigland, Head of Alfa Romeo Brand, FCA – North America.  “With an all-new lightweight platform and class-leading power and handling, the all-new Giulia delivers on the pedigree of incredible technology, race-inspired performance, and Italian design and style.”

Following the launch of the 2017 Giulia, Alfa Romeo will introduce the fill line of Giulia models.  This will include an all-new Alfa Romeo-designed all-aluminum four-cylinder turbo engine with direct injection, fuel-saving and emission-reducing MultiAir2 technology, and twin-scroll turbo technology for maximum responsiveness.  The entry-level Giulia will feature 276 hp.

Built around the driver, Alfa Romeo Giulia Quadrifoglio designers put the focus on simplistic elegance, incorporating the essential elements for performance.  The high level of crafstmanship starts with an asymmetric-styled instrument panel, featuring a driver-focused cockpit.  The Giulia features a look that could only be crafted in Italy.

At the center of the interior, Alfa Romeo Giulia’s all-new 3-D Navigation offers and intuitive, yet sophisticated series of features, including a high-resolution 8.8-inch widescreen display with real-time vehicle performance pages and telemetry, plus 3-D graphic navigation.  A short-shift six-speed manual shifter stands in the center console, while the all-new Alfa Rotary Pad offers a gesture recognition system which allows the driver to interact with the Navigation system simply by moving fingers on the pad.

In the interest of racers, Sparco racing seats are available and provide maximum lateral support during extreme cornering on the track.  These race-inspired performance seats are even better than the standard leather and Alcantara high-performance sport seats because they are the lightest in the segment, yet provide comfort for long road trips.

To deliver a best-in-class 505 horsepower and a flat torque curve with 443 lb.-ft of peak torque between 2,500-5,000 rpm, the state-of-the-art engine features a bi-turbo design with 35 psi peak boost.

The 2017 Alfa Romeo Quadrifoglio will begin production for North America in the late second-quarter with a U.S. MSRP of around $70,000.