RacingJunk News > Racing > Motorcycles and Powersports > A Slideshow History of the Harley-Davidson, Part 2
Previous
Next 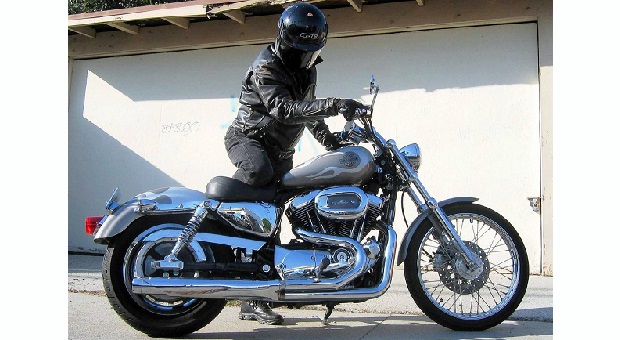 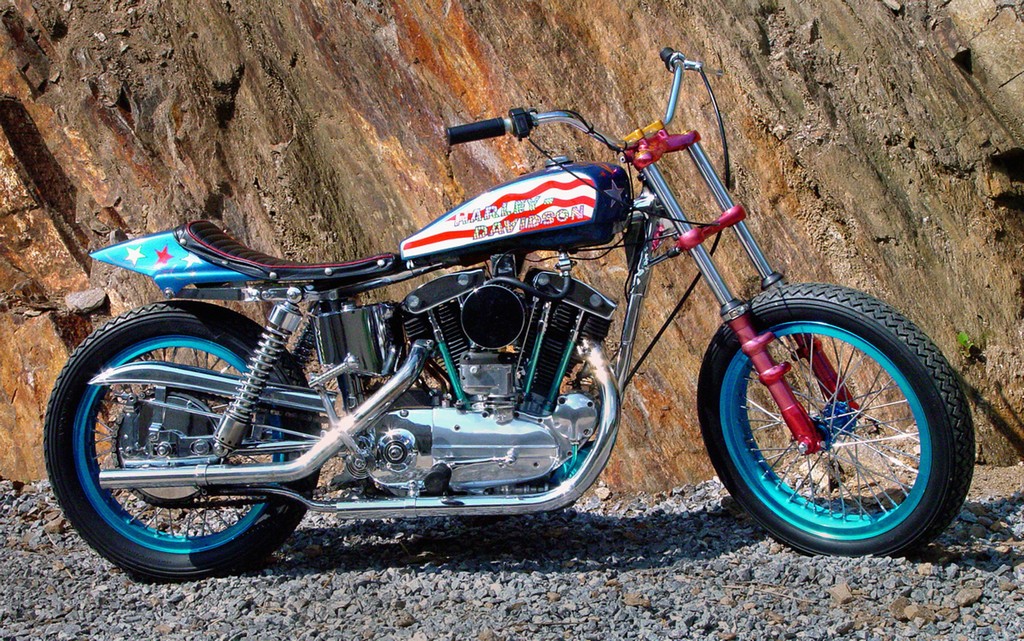 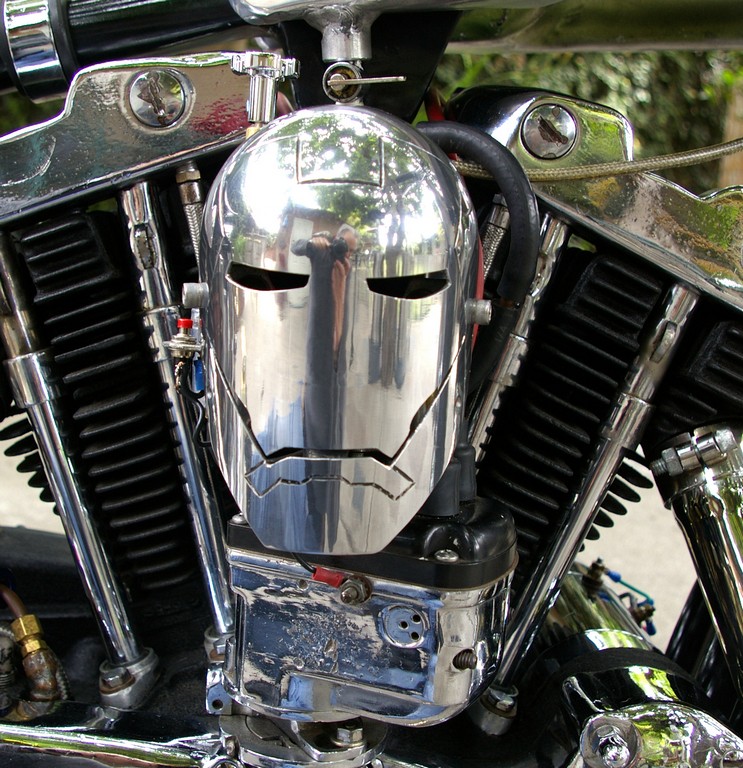 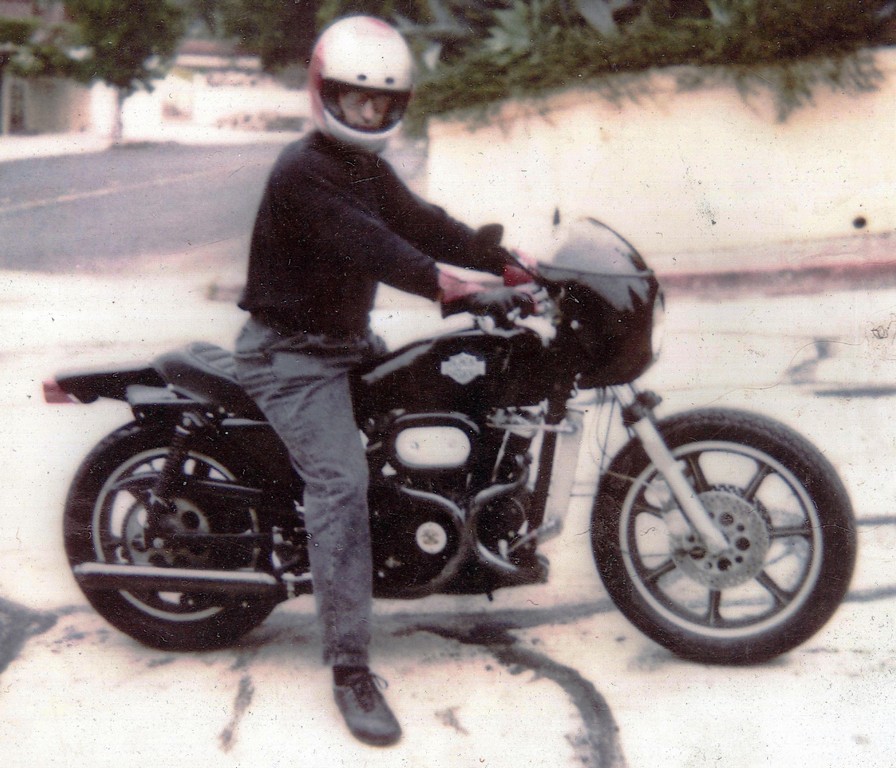 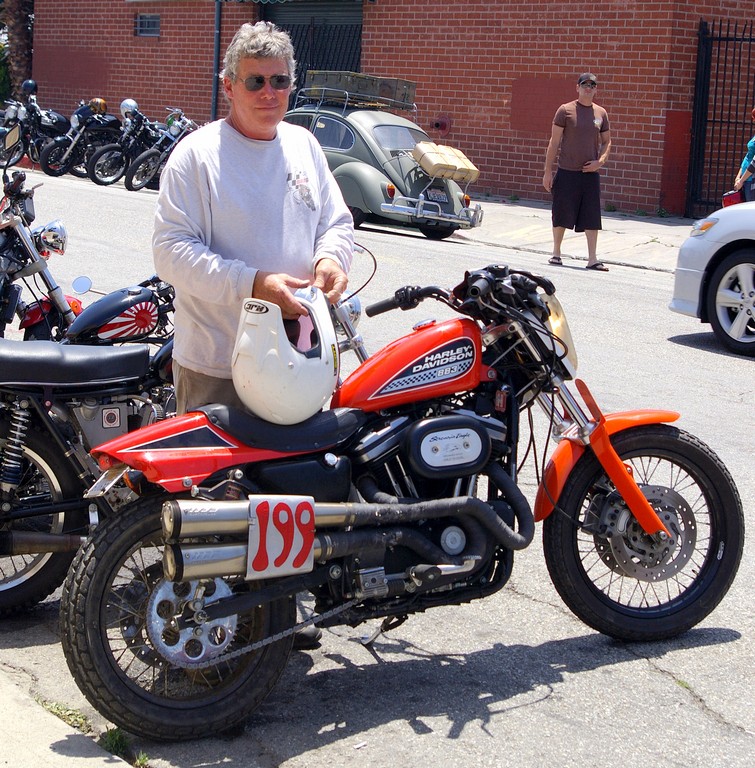 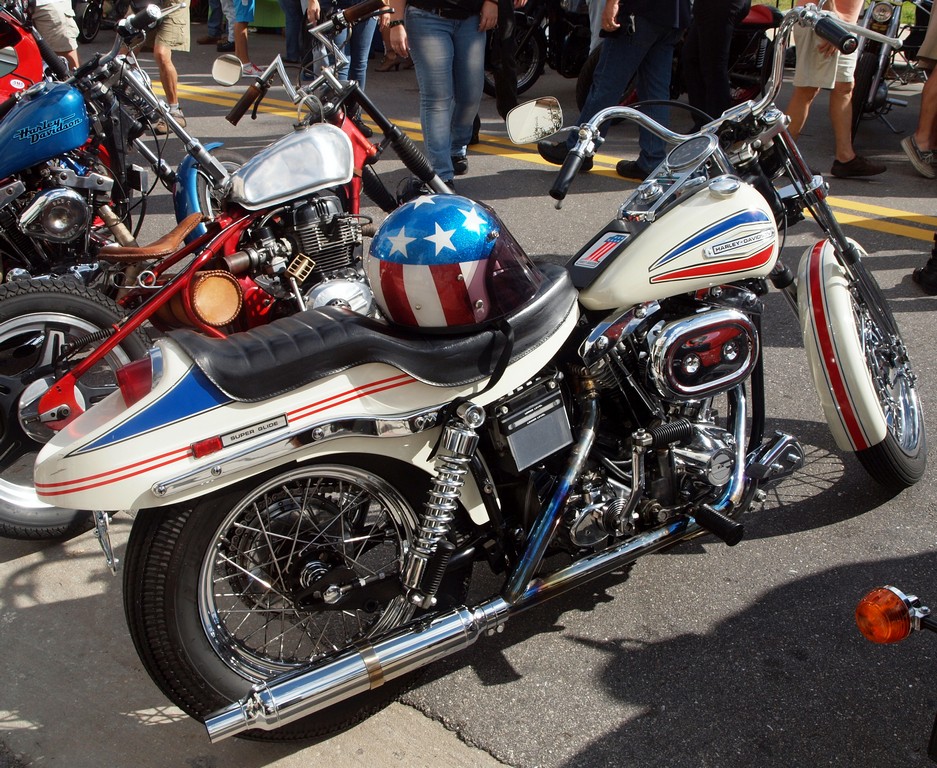 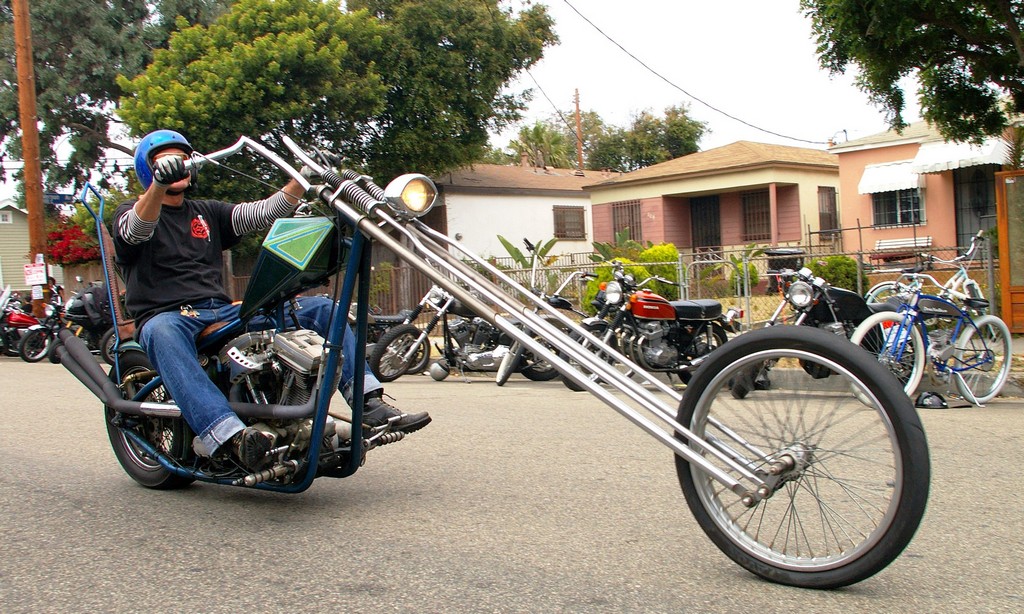 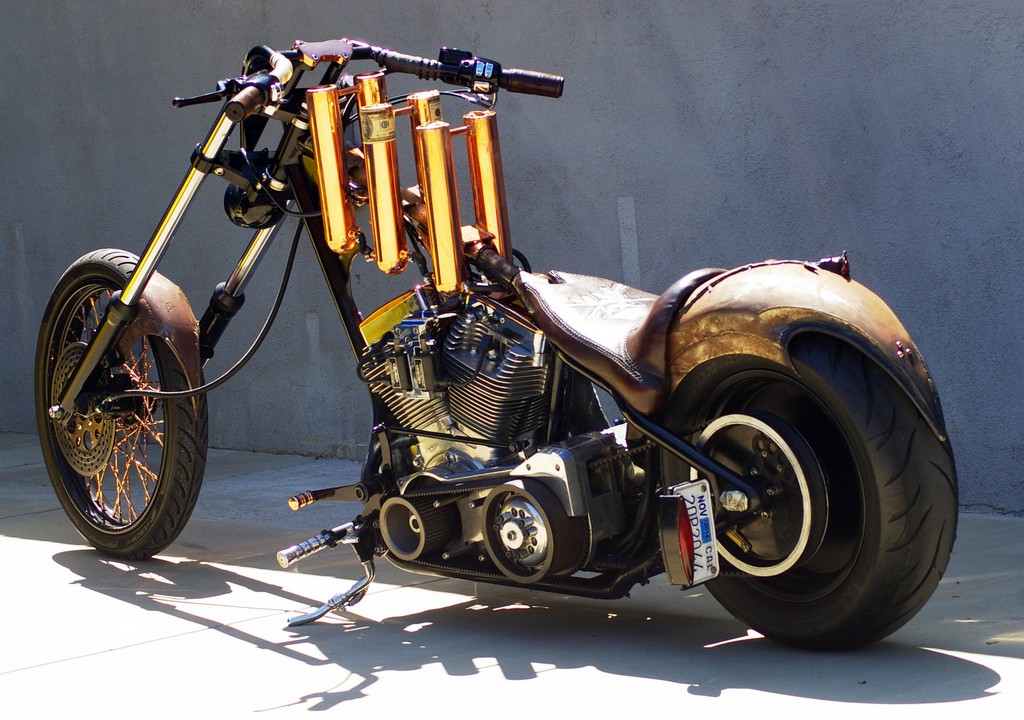 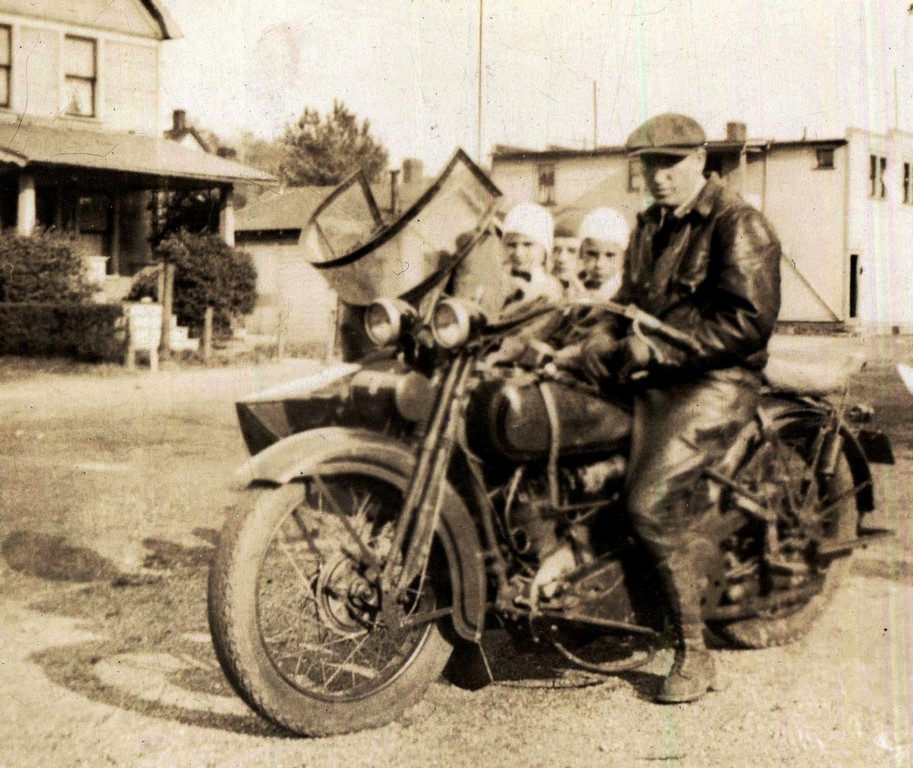 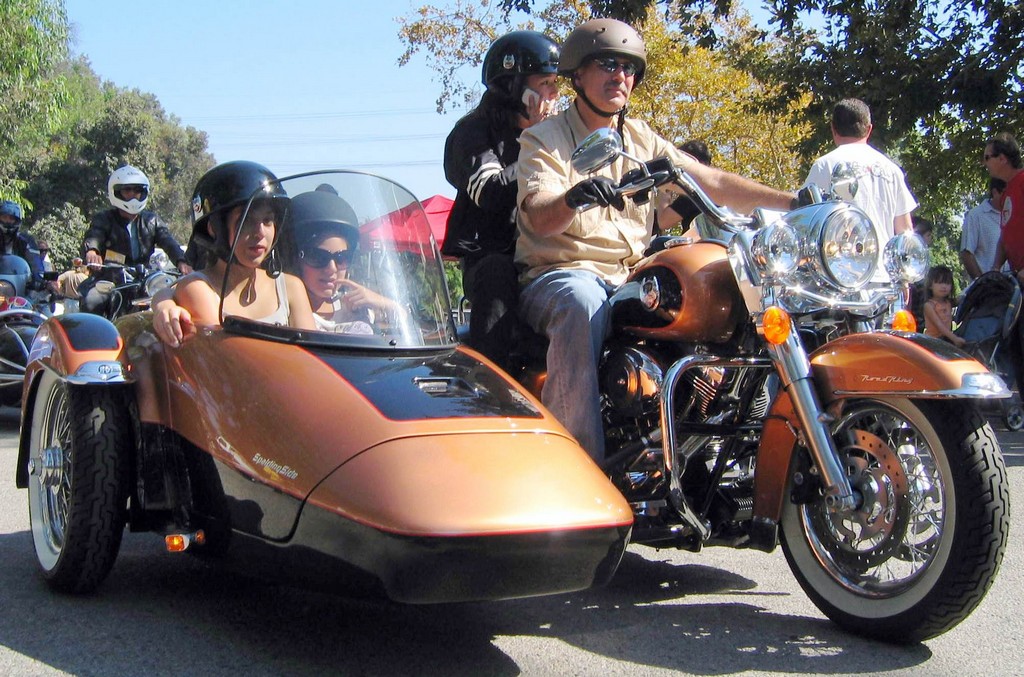 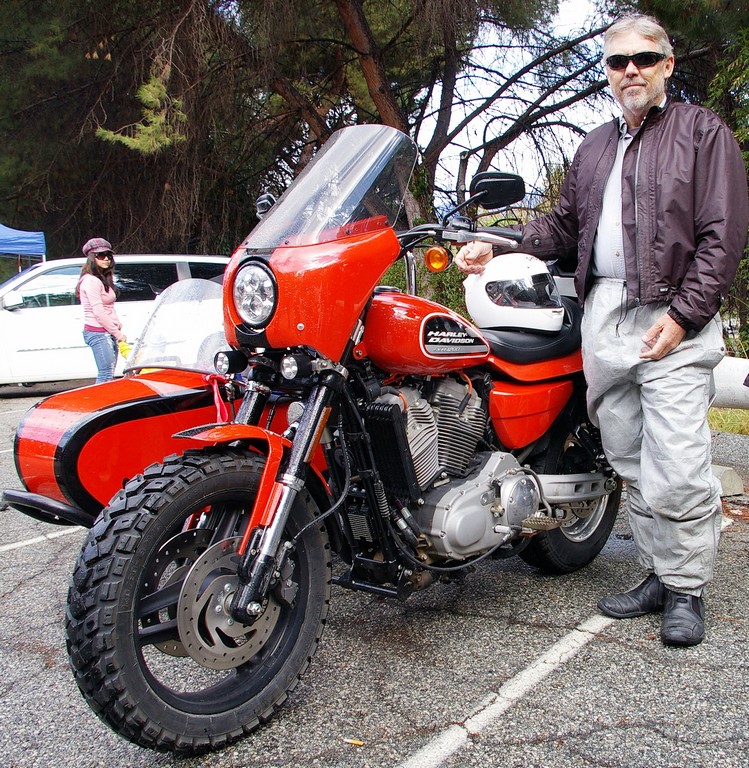 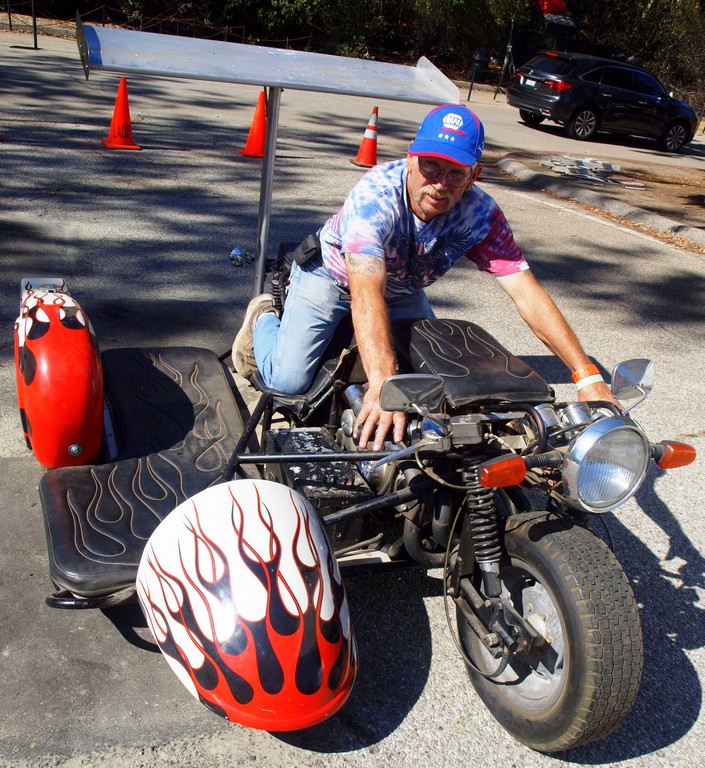 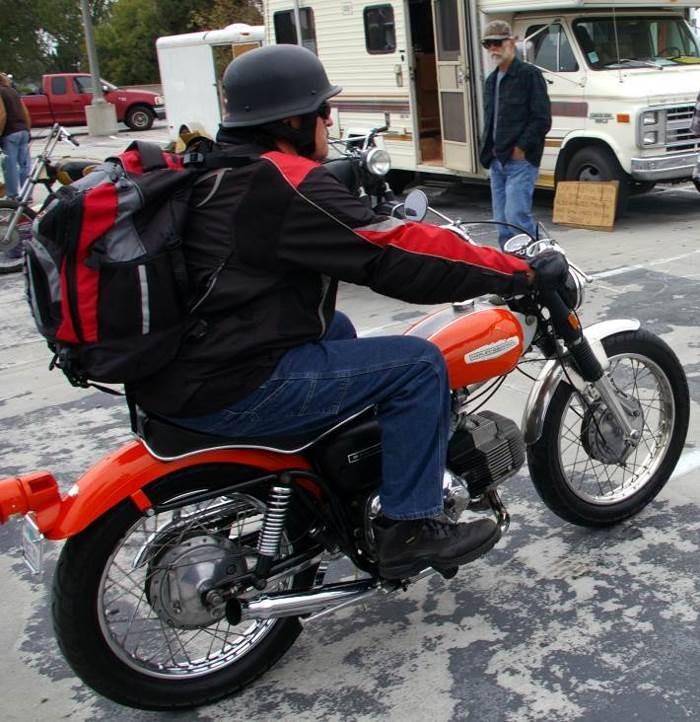 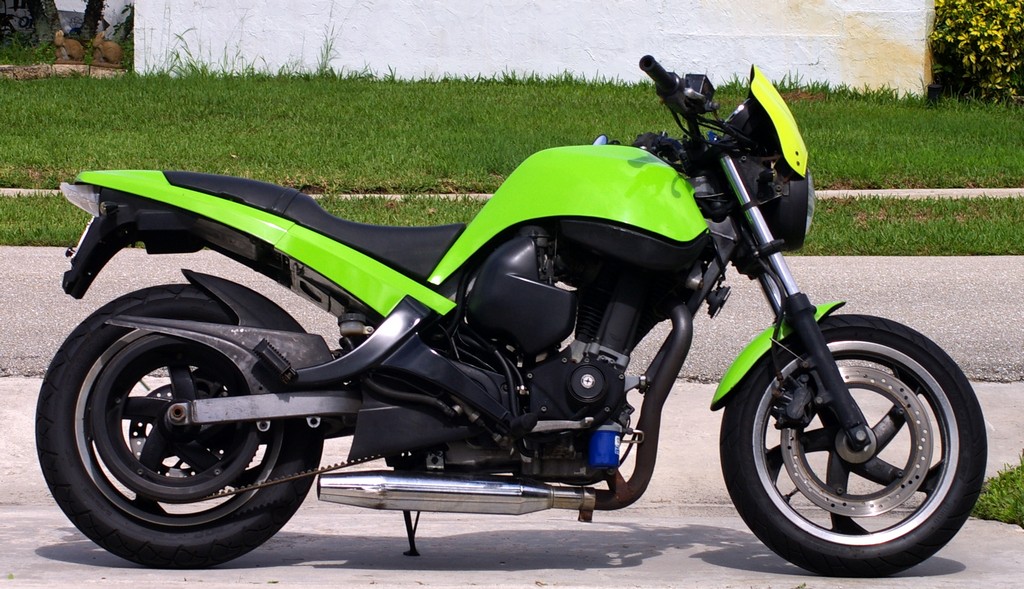 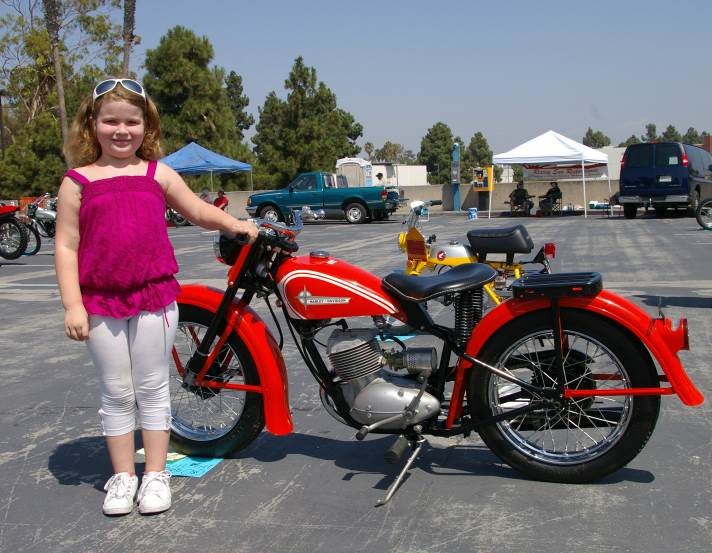 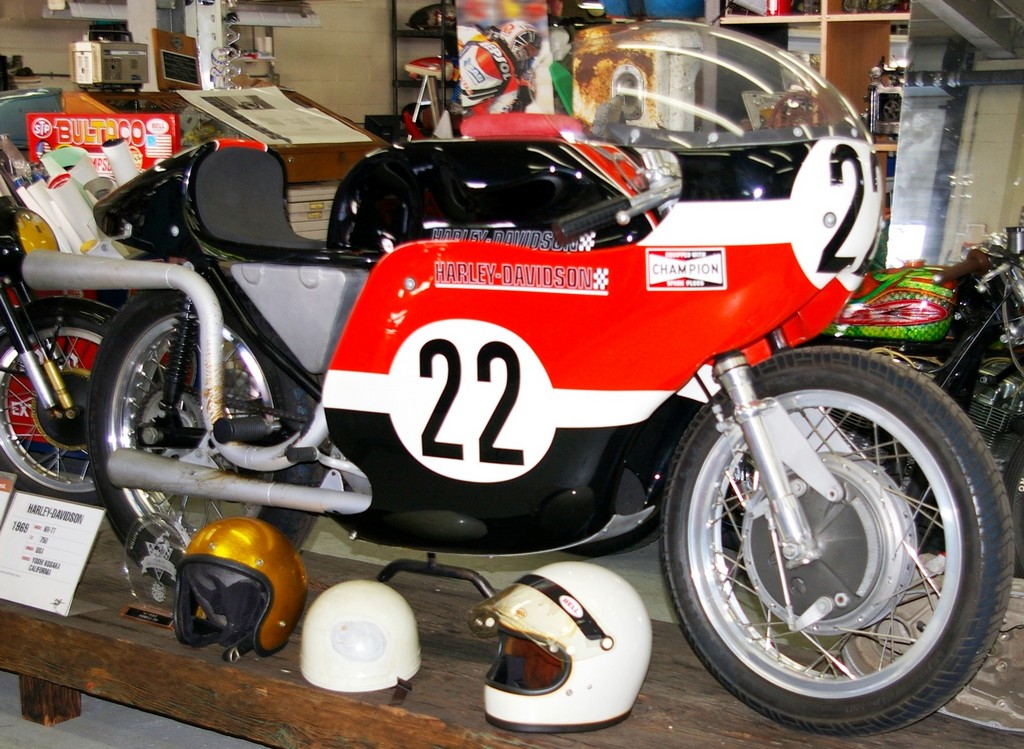 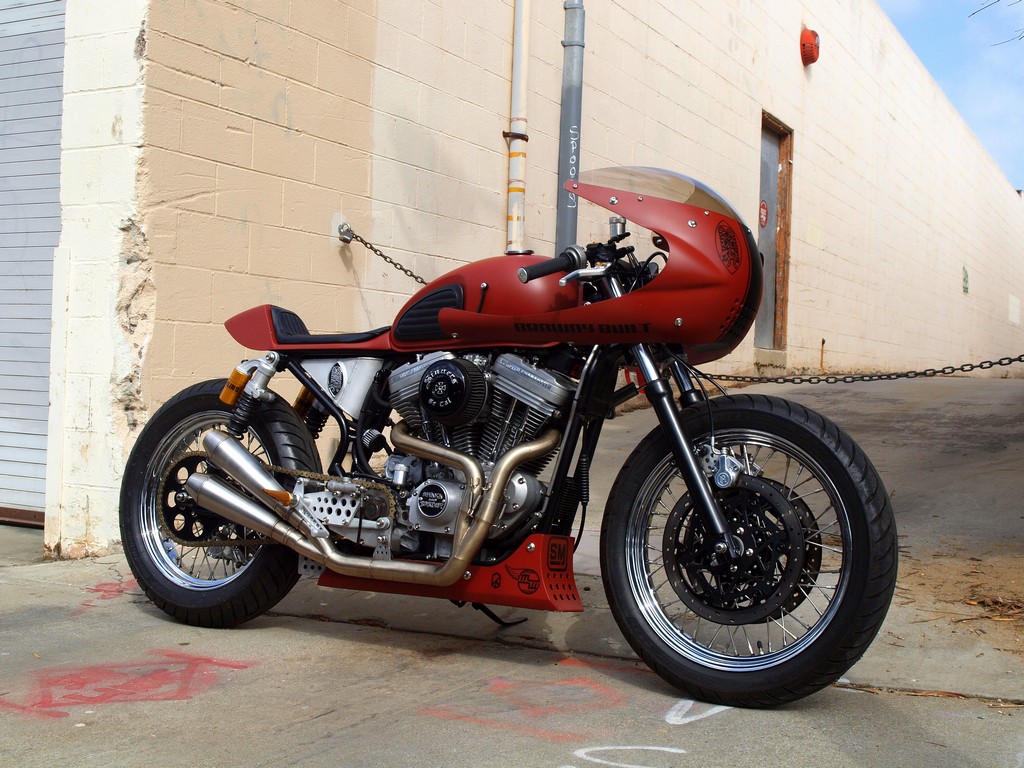 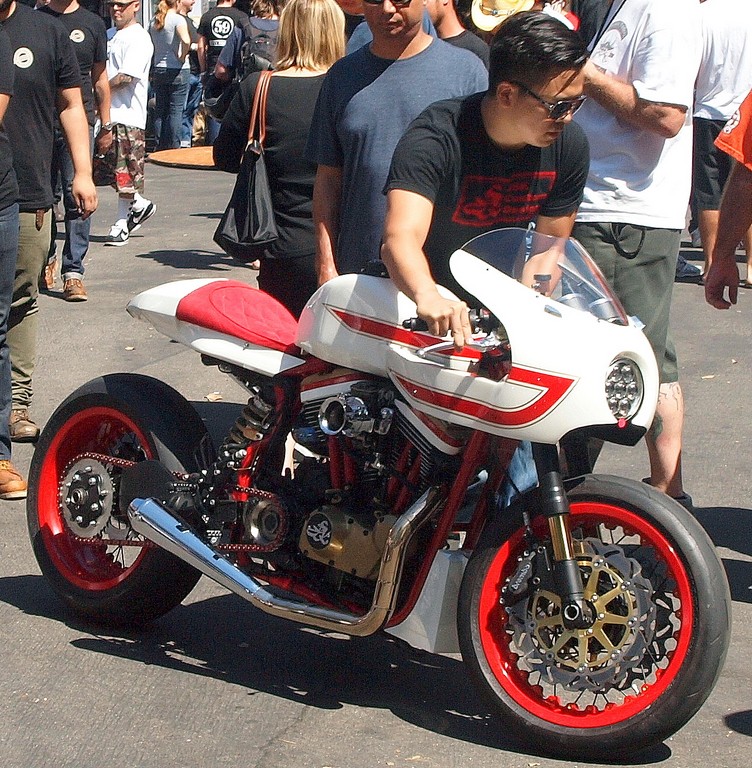 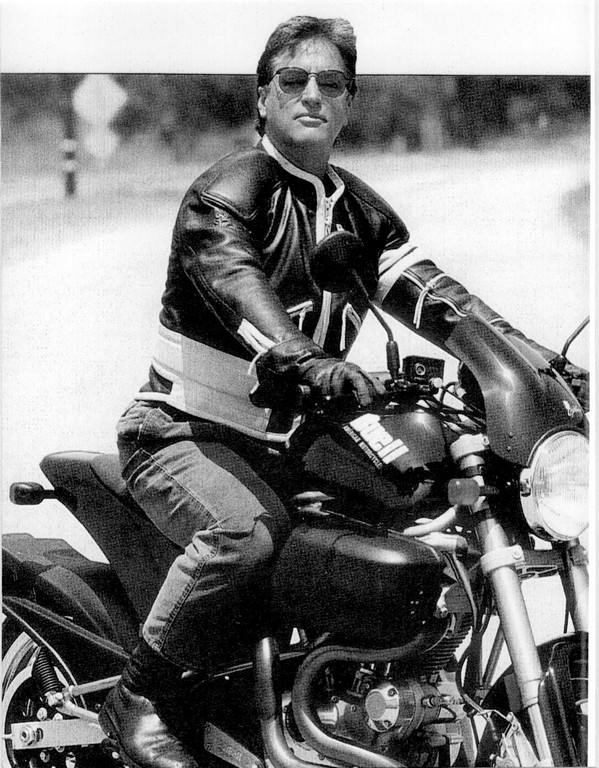 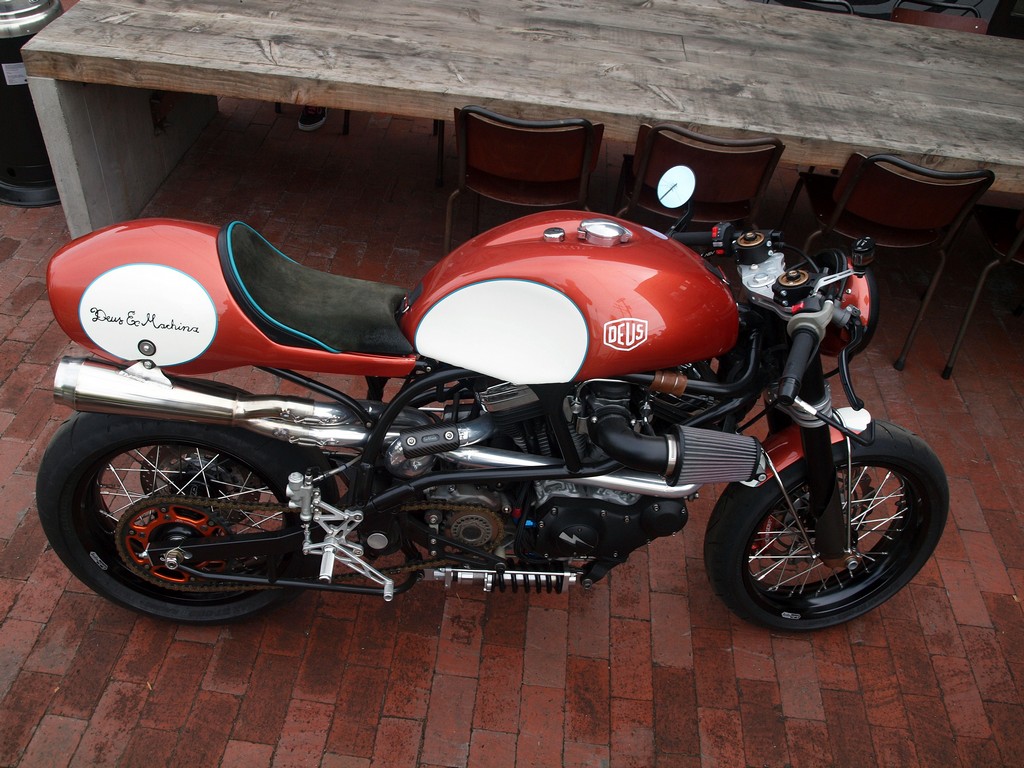 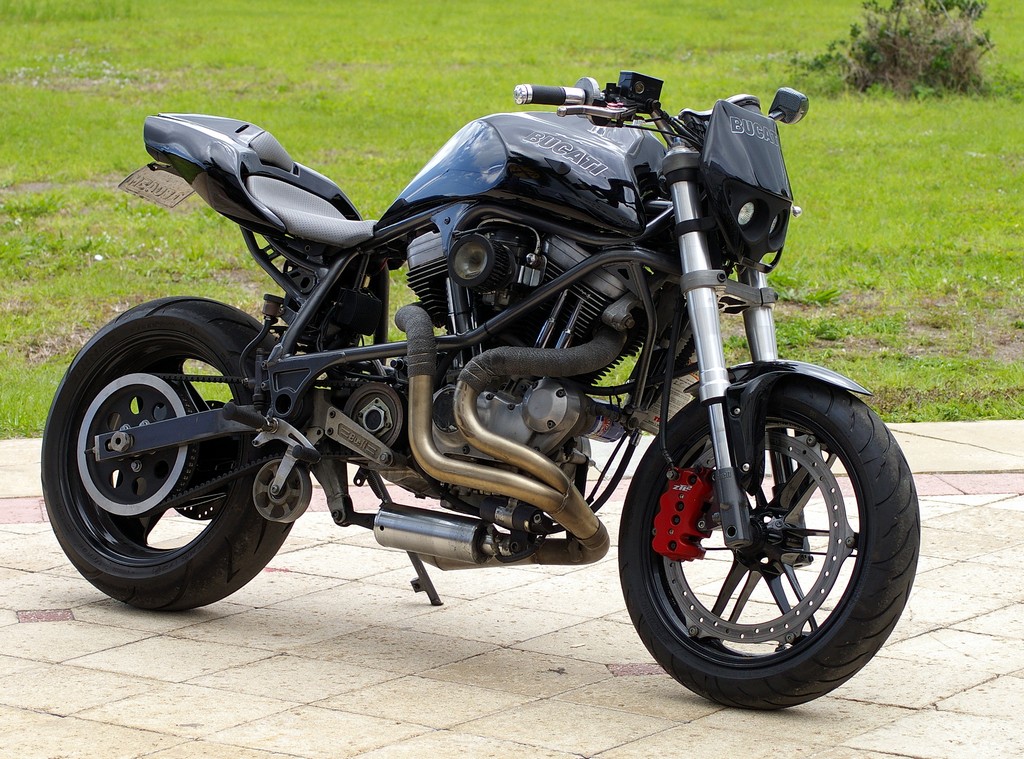 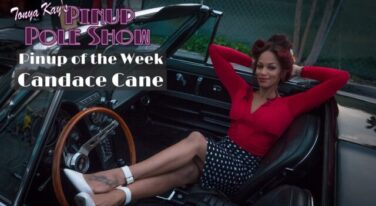 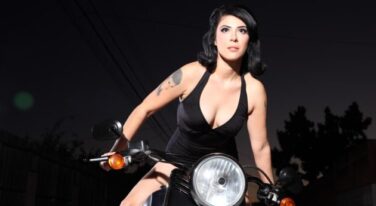 Monday's tale of Harley-Davidson history concludes in this article, starting off with the all-time successful Harley Sportster. I got hold of this Sportster already customized and “on perpetual loan” from the factory, or so I thought. So I putted around it for a while, thankful for the “gift,” until I got a bill and so sent it back to its origins. And yes, the neighbors weren’t too happy with that exhaust system.

Despite Big Twin fans looking down on the little motors, the Sportster, aka XL, models have been bread and butter for Milwaukee since they were introduced in 1957 and continuously in production with evolving frame, fenders, gas tanks and front suspension and powerplants. .. Definitely plenty of rumble for the bucks.
Here’s another awesome bit of history I found in North Carolina at the Wheels Through Time Museum - a bike built by Evel Knievel’s painter for the stuntmeister daredevil, who in his unique way helped put Harley on the global map - it only took breaking over 100 bones.

While the Sportster has been considered the poor stepchild to the Big Twins, the Sporty has gotten many a first rider on the road as well as served in starring TV and movie roles. This bike sports the new-for-1966 Shovelhead engine design. The bike has been in production ever since, a Milwaukee staple. Note the extended forks and rear shocks, intended to soak up Evel’s bone-crunching landings.
Tony Tran of Tcycles, located in El Monte, CA built his vision of an Ironman inspired Sportster in his back yard, literally pounding out the gas tank over a tree limb. As for the powerplant, it was produced from 1957 until 1984 in 883cc and 1000cc form, the XL Shovelhead was replaced by the Evo motor in 1985. Along with building custom show winners, Tony has a penchant for exotic parrots and giant Koi fish.
Intro’ed in 1977 and in production only for one more year, Willie G’s café race design for the XLCR Sportster fell mostly on deaf ears, but later became a cult classic and highly collectible. Having always been a fan of its café racer personality, in 1989 I finally found one, a ’78 model, I could afford, and took it to a famous Harley dealership in Glendale for a check over and tune-up. Assured all was well, I picked it up, paid the bill, then rode off into the sunset… Until about 20 minutes later it blew a piston, making a nice hole in the case as well. You learn quickly, after pushing an XLCR for a while, that it’s heavier than it looks. Despite its injuries, a guy from Australia was happy to buy and take it back Down Under. About the helmet I’m wearing… Yes, I had a watermelon head.
The original 1983-84 XR1000 wasn’t a hit at first, but is now worth big bucks. More recently, Harley took an 883 and gave it the XR look. Storz also came up with a cool conversion kit to transform a stock Sportster. This bike actually has its roots back in 1952 with K Model, in this case reworked as a 750cc with a mix of XLX Sportster and XR750 parts, but beefed up to 1000cc.
When first unveiled, the new 1971 FX Super Glide variation of the Shovelhead as envisioned by designer Willie G. Davidson got a bunch of giggles from the purists who, if they got the bike, quickly tossed the rear section… But of course a few decades later it is a sought-after collectible, especially when found in this minty condition.
New motors can go retro if you stretch your imagination. And yes, you can hang your laundry out to dry on that lonnnngggggg springer front end. Harley stepped up to the Evolution (Evo) design motor (1340cc) in 1984-99, then onto the Twin Cam (1450-1584cc) in 1999-2016 and most recently the Milwaukee-8 (1746 and 1868cc) as of 2017.
Okay, here’s a bike the owner has named “The Hit,” which could mean a couple different things. In any case, the engine is 110 cubic inches stuffed into a classic Paughco frame, and those copper-plated six-pack Organ Pipe velocity stacks help make some beautiful cruisin’music thanks to L.A. based George Harris, the hard-driving force behind a multi-tasking company called Mean Machines Custom Bike Designs/Tap’d Out Studio.

Hacking it Through History:
Sidecars served as the SUVs in the early 1900s and continue to draw fans of three-wheeling, who have contrived all manner of “sidehacks” for use as anything from daily transportation to high speed competition. Harley again has led the way and continues to produce both sidecar and trike combinations.
Wife and two leather capped kids peek through from behind the sidecar windshield, which has been raised for the photo op. Dad’s all duded up in leather, but apparently head protection was not a high priority. Note the bike’s dual headlamps, indicating night time duties.
This Road King, matched to a Spalding sidecar, provides plenty of family transportation. This rig was one of dozens that showed up annually over the decades for the L.A. Griffith Park Sidecar Rally, founded by the late, great Doug “Mr. Sidecar” Bingham, a leading figure in the promotion of sidecars.
Mitch Hart’s XR1000 takes the Harley cake for performance three-wheeling.
This 1970s 1000cc Ironhead Sportster was originally campaigned by racer Dave Roach back in the day. In this case, its new owner (by the name of Wolfy) realized his dream to track it down and make it street legal. And yes, there’s room for a passenger in the supine position. Asked how it was to ride, Wolfy smiled and said, “It’s a rush.” Then, when asked what he does in real life, he smiled again and said, “I deliver Bingo supplies.”
Once upon a time in 1960, the Factory ended up buying 50% interest in the Aermacchi company, the Italo bikes having their own history of race winners. In this case, H-D slapped their logo on their tank badges, painted them orange and black and called them “all new 250cc Sprints,” with sales launched in 1962. Ciao, bambino! A bigger 350cc was launched in 1969. Smallish and not V-twins, yes, but funsters with an Italian flair - and part of Harley history.
The 500cc single cylinder “budget blaster” was produced by Eric Buell as a Harley-Davidson lightweight entry sport bike. Belt-drive, lightweight, and simple maintenance were high points. Not a powerhouse but fun to ride, easy on gas and on the pocket book. I still have this one, now stored down in South Florida for a visit bike. Here’s the kicker: Offered by H-D from 2000-2009, the Blast was then scrapped from the line-up… and then a bunch were crushed into cubes. In 2010, limited edition Blast Cubes were offered for sale to the public as art, each complete with Eric Buell’s hand signed autograph. Mine has yet to be crushed.
A young Harley fan posed several years ago at the El Camino Bike Show and Swap with this restored Harley Hummer. Pint-sized 125cc bikes were produced from 1955-59. The design was borrowed from a 1930s German DKW design, the engineering ending up in the hands of the Allies after WWII. By 1953, the engine had grown to 165cc, good for 5.5 sizzling horsepower. Many a paperboy made his rounds on a Hummer. While the term “Hummer” has been applied to several small Harleys over the years, this example appears to be a “True Harley Hummer” as produced by the factory. The giveaway is the fact that it shows no battery; instead the stripped down, econo-version used a magneto, plus was minus horn and turn signals, all to keep the price down and boost flagging sales.
From 1953 to 1969, the KR and KRTT delivered 13 victories at Daytona, making it one of the company's most successful road racing bikes. Among the famous competitors was Mert Lawwill, who rode a ’70 model into the history books. The KH was campaigned in ’53, while the upgraded KR from’52-’69 was king of the hill.

This stellar example can be found on display at the aforementioned Garage Company in Inglewood, CA.
This “Brawny Built” 120 HP café racer was built at The Speed Merchant by Brandon Holstein, aka Brawny. The goal was to it ready for the 2012 Born Free-5 show, a collaboration with Mach Modified Performance (Brentwood, NY) who built the motor, an 85 cu. in. Big Bore.
This new builder, his shop called JSK, appeared at the 2014 Venice Vintage Motorcycle Club Rally, where he won Best Café Racer award. The bike was powered by a ’97 Harley 1200 Sportster, the chassis modified with Ducati pieces including the single-side swingarm.
Looking for a little attitude, Milwaukee bought into Eric Buell’s new take on the Sportster. While working for Easyriders, I was given a new Buell to play with, and I was hooked. While the Harley purists turned their back on it, for me it was the right mix of gnarly and Harley.
As chief tech at Deux Ex Machina emporium, of all things SoCal cool, Michael “Woollie” Woolaway typically builds small-displacement Japanese cafe customs but also carved out a big twin-powered Buell that he tagged with the name “The Bully.” It is based around an X1 Lightning, using only part of the main frame and the carbureted motor, then featuring a fabricated chrome moly subframe and swingarm for a classic Norton Featherbed look. The tank’s design was originally inspired by an ‘80s Yamaha TZ250, the seat section from a ‘80s Superbike.
Here’s another of the cool customs that flocked to the West Palm Beach, Florida 2014 Iron and Clematis Vintage Motorcycle Festival staged by the Vintage Iron club of West Palm Beach. That’s what you get when you mix and match an H-D Buell power train with a Ducati frame. What’s not to love? The bike was one of several hybrids created by Alain Bernard, owner of the Sarasota, FL shop called Santiago Choppers, who oddly enough actually build rad café racers. And yes, I am a fan of the Buells, and one’s on my bucket list.
Back to Post