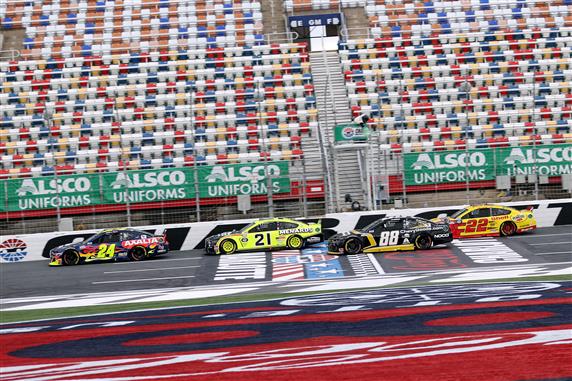 Chase Elliot gets the impressive victory at Charlotte Motor Speedway on Thursday night.

This win comes after two nail-biting defeats since the re-opening of NASCAR’s 2020 season May 17 at Darlington, Elliott got to the checkered flag without incident and won the rescheduled Alsco Uniforms 500 NASCAR Cup Series race at the 1.5-mile intermediate track.

In an event contested at 500 kilometers (312 miles), Elliott ripped by a  fading Kevin Harvick for the lead on Lap 181 of 208 and cruised to a 2.208-second victory over fast-closing Denny Hamlin, who passed Ryan Blaney for the runner-up position on the final lap.

The victory was a big break that finally went his way for the driver of the No. 9 Hendrick Motorsports Chevrolet, who was wrecked by Kyle Busch while running second May 20 at Darlington and was KO’d by a late caution in the Coca-Cola 600 at Charlotte on Sunday while leading with two laps left.

“It feels awesome,” said a relieved Elliott, who won for the first time this season, the first time on the Charlotte oval and the seventh time in his career. “Man, it was a tough week for sure. We’ve had some tough losses, but that deal on Sunday night was a heartbreaker. It’s not the Coke 600, but any win in the Cup Series is really hard to get.”

Crew chief Alan Gustafson made key adjustments to Elliott’s Camaro on the team’s final pit stop on Lap 146, under caution for Timmy Hill’s accident in Turn 4. The car took off, and 32 laps after the final restart, Elliott passed Harvick, whose No. 4 Ford faded during long runs.

Even with a Chevrolet that was running up front, Elliott didn’t think he was home-free until he saw the checkered flag.

“Just after the last couple of weeks, I didn’t think, truly, it was going to go green to the end. I’m just glad it did and glad we’re, hopefully, back on the right path.”

The start of the race was delayed from Wednesday when tropical depression Bertha invaded the Carolinas. Nor was Thursday race free from weather issues. Lightning in the area of the Concord, N.C., track interrupted the proceedings for 75 minutes after NASCAR called a caution on Lap 28 for Matt Kenseth’s spin in Turn 4. After the resumption at 9:07 p.m., Harvick had the dominant car, piling up a race-high 63 laps led.

But Harvick’s car was set up for short runs, and the final stint went long.

“It just fell off at Lap 30,” Harvick said. “We knew that’s what we had, and it went straight 60-some laps. (The team) did a really good job of turning the car around—the total opposite of what we raced last Sunday. So it was a good test session for us. We just didn’t need a long run.”

Blaney ran third behind Elliott and Hamlin, who was driving without the services of his crew chief, car chief and lead engineer after the team was penalized for the accidental dropping of tungsten ballast on the warm-up laps for the Coca-Cola 600.

Logano won Stage 1, with Alex Bowman picking up his fourth stage win at Charlotte this week with a victory in Stage 2 after leading 51 laps. Bowman, however, clobbered the Turn 4 wall while chasing Harvick on Lap 136 and finished 31st, two laps down.