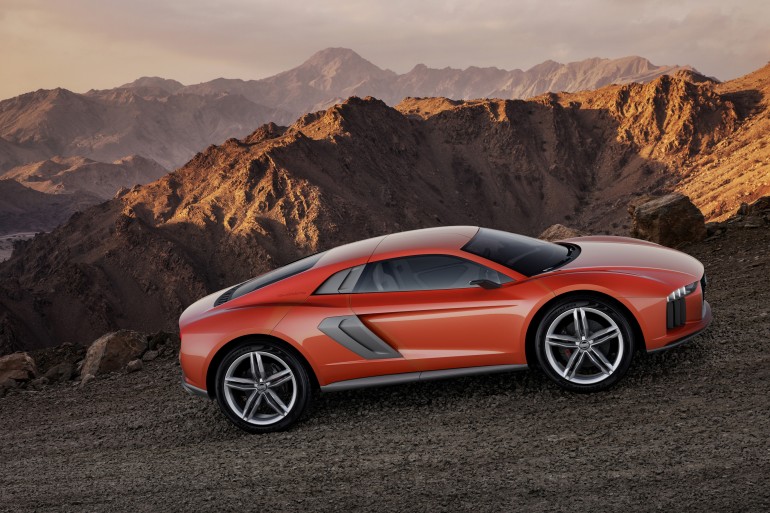 We all love to go fast – but what if you like going fast off of paved surfaces? The darling of 2013’s Frankfurt Motor Show was Audi’s new Nanuk Quattro Concept car –  a hot, curvy sportscar body over all-wheel drive, a ludicrously torquey Diesel V10, aggressive tires and plenty of ground clearance.  It’s the poster child for the off-road sports car concept, leading the charge in going off the literal beaten path, but it’s not the only option out there.

Here are the top 7 dream cars designed for going fast where you won’t always find roads. The automotive equivalent of an adventure motorcycle, these vehicles are designed to tackle virtually any kind of terrain. Whether you want to drive from San Fransisco to Chile or run the Paris to Dakar Rally, these are just what you want on hand when the Zombie Apocalypse rolls around.

7) Audi Nanuk Concept
Packing a beefy 5.0L V10 Twin Turbo Diesel engine which delivers a walloping 544hp and 738lb/ft of torque in a 4200lb two-seater package, the Nanuk is unlike any vehicle on the road today. Like most of Audi’s offerings, it gets that tsunami of torque to the ground through Audi’s Quattro system. All of this translates into 0-100km (62mph)in just 3.8 seconds. Of course, being an Audi, there’s some wizardry  in the suspension too – the adaptive air suspension can be manually lowered 1.18” or raised 1.57” higher for increased ground clearance along with a modified all-wheel-steering system.

We can’t wait to see the production vehicle! 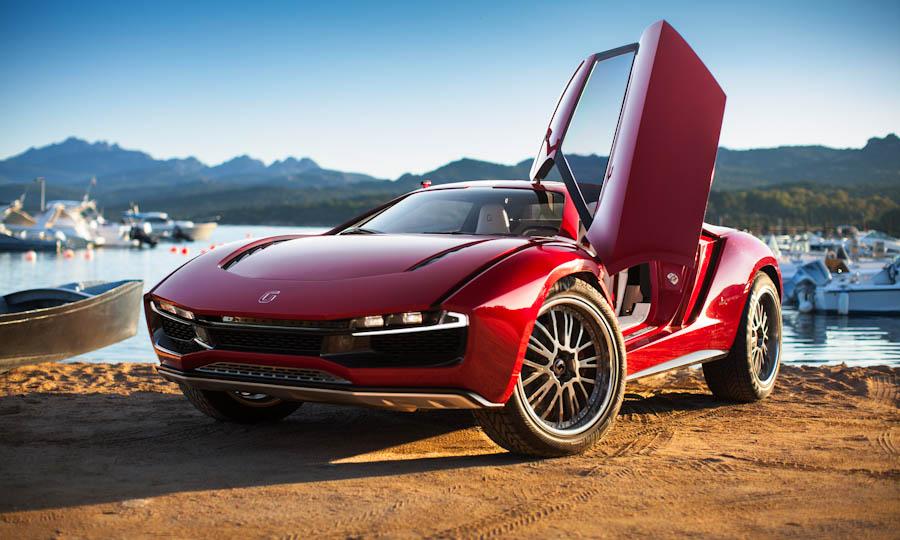 The spiritual predecessor to Audi’s Nanuk, the Parcour concept is named for the popular European sport of free running, which involves sprinting, running, jumping, climbing up all manner of surfaces even in the face of death. There’s definitely some Lancia Stratos DNA in the design, but with Lamborghini styling elements thrown in for good measure. Taking some of the ideas and styling from the Urus SUV concept, the Parcour puts it all together in a beautiful way without any of the SUV wonkiness. Powered by a Lamborghini-sourced 550hp V10 over a heavily modified Gallardo chassis, nearly every aspect of the car is bespoke – as is befitting such a design. Complete with specialized settings for all manner of terrain, the Parcour did successfully evoke the “go anywhere beautifully” soul of the old school Lancia Stratos. But unfortunately, you can’t have this one either – it was recently crashed at the Goodwood Festival Of Speed. 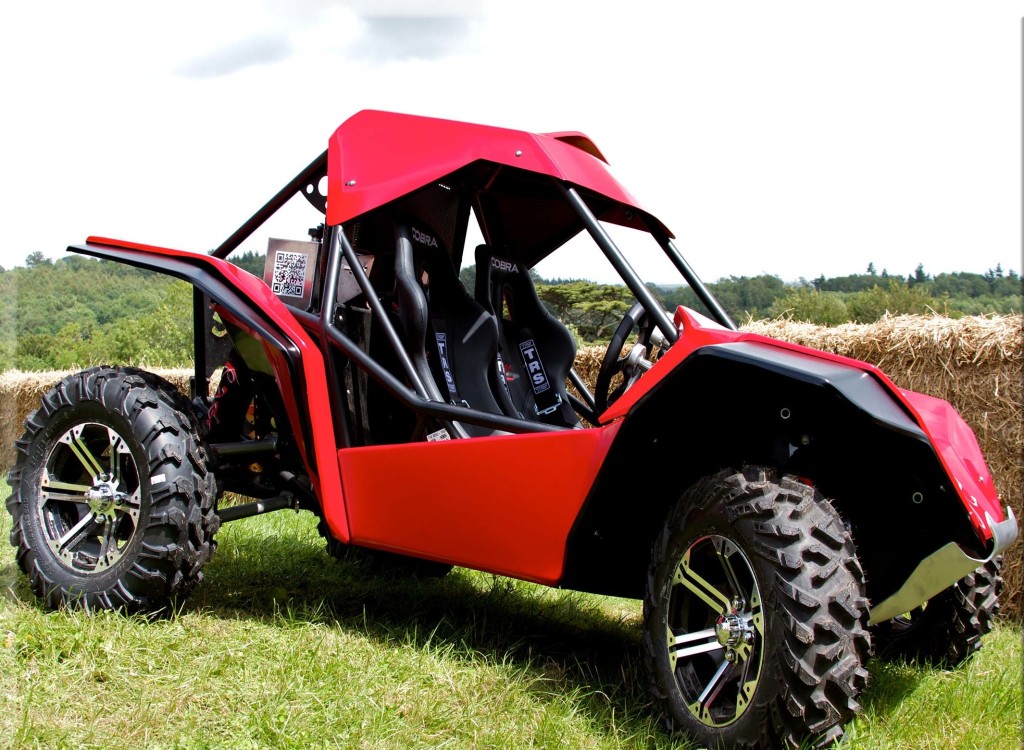 Designed with the express goal of being as stellar on a racetrack as it is off-road, the Comet R seems to take inspiration from superlight track cars such as the Ariel Atom and KTM X-Bow. With a weight of well under 600kg, the Comet relies on a  1400cc Kawasaki engine from the ZZR1400 superbike. With a 0-60 time of about 3.5 seconds, the Comet is a case of pure function over form. It will happily get  sideways on a road course or off-road environment and huge amounts of suspension travel allow this bad boy to take the jumps like a trophy truck. It’s also road legal [in the UK, anyways], meaning that you don’t need a tow rig to go from Irwindale Speedway over to the Azusa Off Highway Vehicle Area. 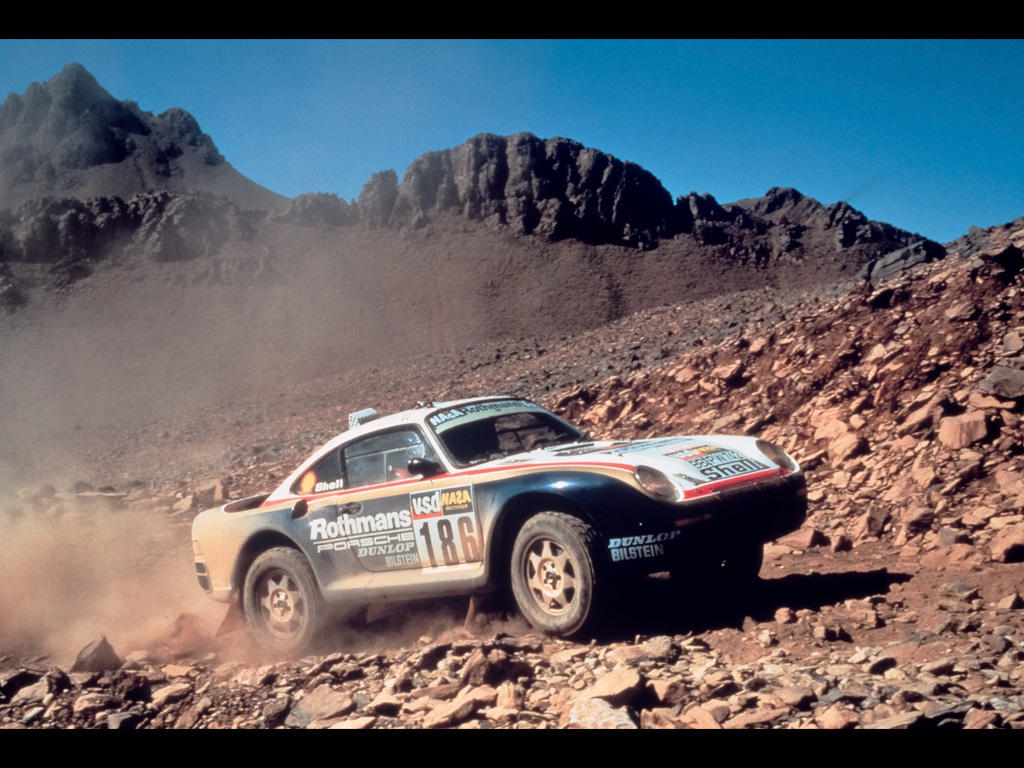 What’s a Porsche doing on this list? Hear me out, here. The 959 is the mack daddy original gangster of Off-Road Supercars. Back in 1981, Porsche’s managing director got a few clever ideas for a “new” 911. This evolved into the 959 becoming a cost-is-no-object technical development exercise, featuring a then-all-new All Wheel Drive system, a twin turbocharged flat six with water-cooled heads and air cooled cylinders and a bizarre manual gearbox that had 5 speeds and a “G” off-road gear (as well as reverse, obviously). Its unique aerodynamics meant that it generated “zero lift” at speed and its all wheel drive system was the most advanced of the time. Never mind the fact that it’s stupidly quick on the road – in 1986 the 959 won the Paris To Dakar Group B competition, finishing 1-2. 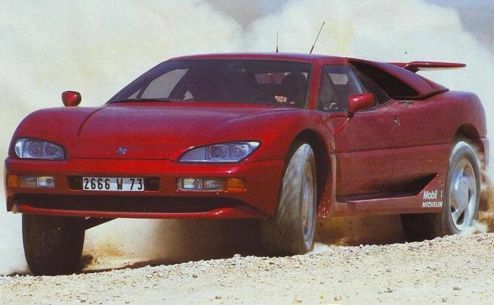 What in the heck is a Mega Track? I know, the name sounds like a ridiculous 1980’s game system, but it’s actually one of the strangest cars to come out of France (and France has some straaaange automobiles). In 1995, the French microcar maker decided they’d build their own supercar – an off-road capable one. The body is typical of early 90’s design, but it has a charm all its own. Powered by a beefy 400hp Mercedes 6.0L V12 (in 1995, that was a lot of power) sent to all four wheels via a 4-speed automatic, the Mega Track had 8” of ground clearance standard- and could be raised to 13” on demand. Despite being something of a porker at 5000lb, the Mega Track still had a top speed of 155mph. Just five examples of the Mega Track were produced before the company stopped production to focus on another Supercar called the Monte Carlo, which failed to be anywhere near as impressive as the Mega Track.
2) Bowler EXR-S 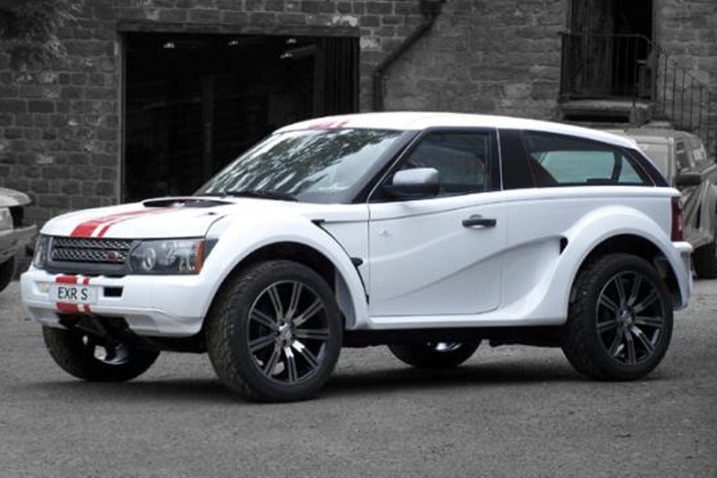 If you’re familiar with the name Bowler, you’re probably familiar with the wild, screaming demon that is the Bowler Wildcat. The EXR-S is their latest endeavor. While it started life as a Land Rover, and still sports some Land Rover exterior cues, the swooping curves cut into its streamlined form tell you right away that this is not the Land Rover that’s going to South Coast Plaza- this beast means business. Looking like a pissed off English Bulldog of a Land Rover, it uses Land Rover’s already capable intelligent All-wheel-drive system coupled with a 550hp 5.0L V8 (the same HP figure the motor achieves in the Jaguar XKR-S), the EXR-S accelerates more like a Supercar than an SUV. While the road going car does feature creature comforts like climate control, leather seats and traditional in-car entertainment, Bowler insists that the EXR-S’ “focuses on the driver and the driving experience- not luxury”, in a sharp break from the “Go-Anywhere-On-Your-Favorite-Couch” feel of your average Land Rover. It indeed is, as the company describes it, “A rally car for the road.” The bad news is that Bowler’s located in the UK, but for £155,000, they’ll happily sell you one over there. 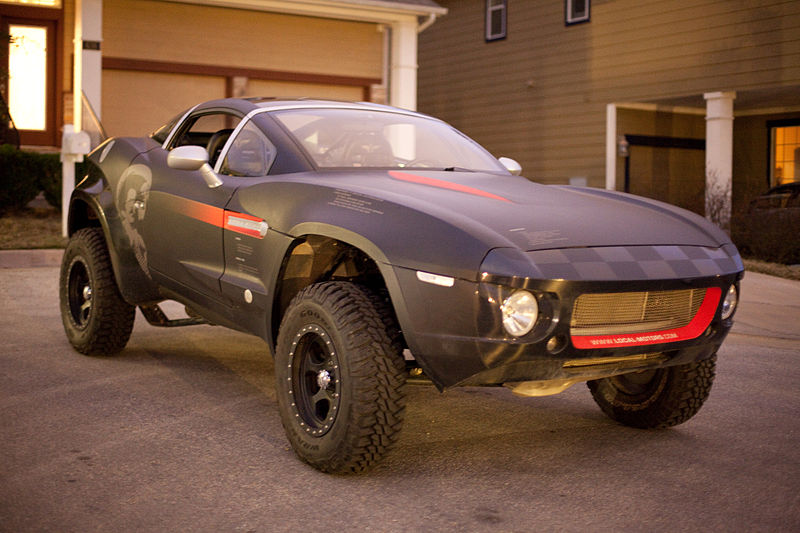 We’ve all heard of crowd-sourcing – using a community’s efforts collectively to develop or create something – well in this case, it’s a car- If you can call it a car. Taking the concept of Formula SAE – using off-the-shelf parts wherever possible to build a car. It sports parts from a wide variety of sources, some bits from a Mustang here, some Civic bits there, a LS V8 there… and before you know it, you have one hell of a vehicle. packing a 6.2L 400hp LS3 V8, GMT400 3-speed automatic, rear wheel drive through a Ford 9” rear end and riding with 18” of suspension travel on 33” Goodyear Wranglers, the Rally Fighter will take on most any terrain. Road legal and incredibly capable, Rally Fighters have been showing up everywhere from Manhattan to King Of The Hammers. The Rally Fighter is a real world vehicle you can buy today – and amazingly, it purportedly can get up to 30mpg – try that in a RamRunner or Ford SVT Raptor. Each Rally Fighter is tailored to the customer’s specifications, with a wide range of options from the seats to the interior and exterior colours. Oh, and as is fitting of any car intended for road use – it has both heat and AC. And you can buy it, today, designed, tested and built, right here in the US. Think you can do better than the current crowdsourced design? Local Motors recently announced a design competition for the next gen Rally Fighter. 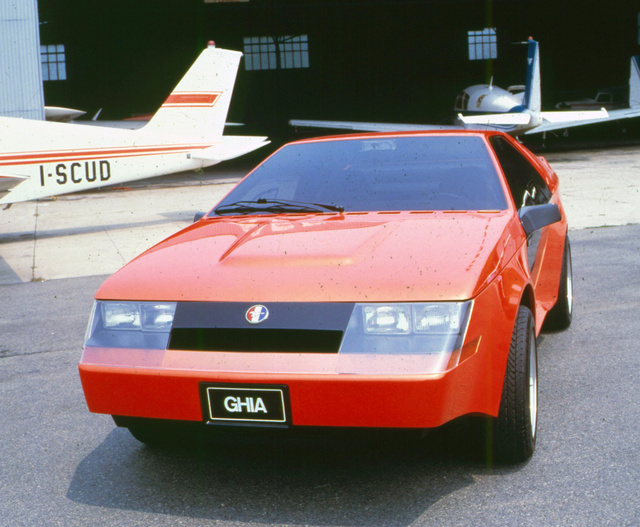 If your dream car happens to be a Fox-Body Mustang, what if I told you that back in ’79, Ford built one designed to go off-road, complete with a gorgeous, Ghia-designed body? Well, that car exists – and it’s the 1979 Ford Mustang Ghia RS-X. Featuring a shortened wheelbase (5.6”) and a wider track (1”), the Ghia RS-X ditched the rear passenger seats in favor of a lithe two-seater body. It had a 2.3L Turbo engine (the painfully early one), 5-speed transmission and stock suspension, but was designed with off-road use in mind. It’s interesting to think about what Group B rally racing might’ve been like had Ford decided to crank up the boost, throw in rally suspension and take it racing. As far as we know, this car still exists in the vaults somewhere, but tragically, it’s not for sale.